Hyundai can’t seem to keep its hands off the i30 N. Sure, the fast i30 may have ruffled the feathers of the established hot hatch set when it first pitched up in 2017, but the South Korean manufacturer didn’t treat the car's relatively strong performance out of the blocks as an excuse to knock off early and head down the pub.

Soon after the original came the i30 N Fastback, which added swoopier coupé styling into the mix and a suspension tune that was slightly softer than that of its at times vice-like sibling. Now, less than three years after we had our first drive of the original in late 2017, Hyundai launched yet another take on its inaugural hot hatch.

When we put the i30 N through the rigours of the Autocar road test, we found it to be a convincing hot hatch brimming with entertainment, value and character, but also one that - aside from its almost bargain-basement price point - didn’t really lead the field in any particular aspect of hot hatchery. That fact, combined in particular with an aggressive suspension set-up that - in its racier settings - really just did not get along with British roads, prevented it from shining quite as brightly as Hyundai R&D boss Albert Biermann and his Hyundai N team might have liked.

This revised version aims to rectify the suspension element of that criticism - not that we’d try to claim outright responsibility for such a decision being made, of course. For the 2020 model year, the i30 N has been bestowed with an updated suspension tune that’s more in line with the one on the Fastback model. Hyundai might not explicitly admit it but, reading between the lines, it doesn’t seem entirely ludicrous to assume the aim was to make the hatch a bit easier to get along with on a daily basis.

So the front spring rates have been softened by some 5%; larger bump stops have been added; and there’s a slightly more slimline anti-roll bar across its nose. The front and rear dampers have been tweaked, too, and the ESP software has been revised. The electronically locking differential remains, as do the 271bhp four-pot motor and six-speed gearbox. 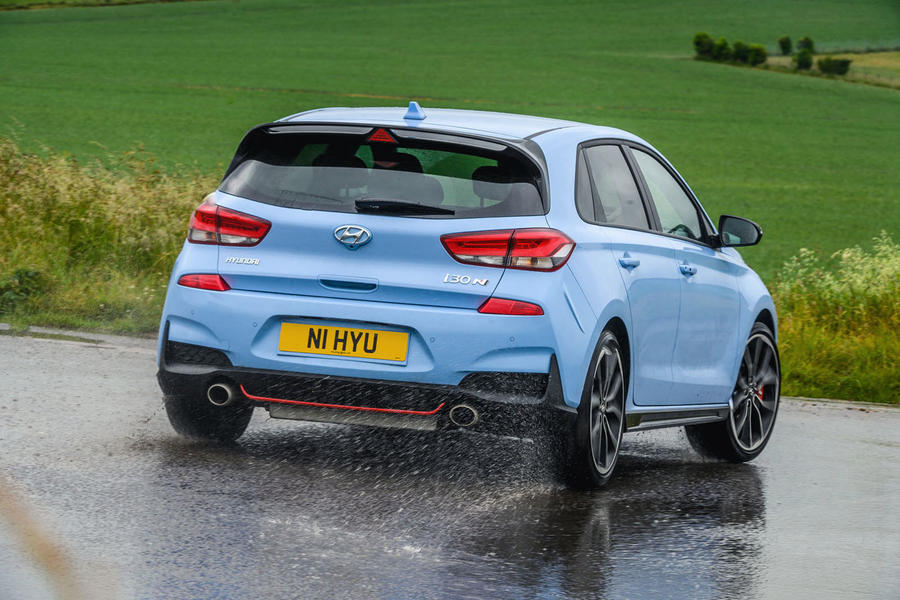 Even with the suspension set to its softest setting, the revised i30 N still has a tendency to sniff out irregularities in the blacktop with a vigour that continues to paint it as one of the more hardcore members of its class.

That said, it doesn’t feel quite as busy or unforgiving over smaller ruts and bumps as a Cup-chassis-equipped Renault Mégane RS might. But equally, I’m not entirely sure that it exhibits quite the same level of willingness as its French rival to then breathe with the undulations underfoot when you up the pace and get a bit more energy flowing through its dampers. There’s a level of suppleness that perhaps wasn’t here previously, but even on a reasonably well-kept B-road, you find yourself wondering if even more leniency might not go amiss.

Such staunchness means you’ll probably hold off selecting the firmer Sport setting unless you’re on particularly smooth stretches of road. N mode, meanwhile, remains relatively unlikely to get much of a look in on anything other than a track - just as before.

Even so, the i30 N’s softened but still comparatively focused set-up undoubtedly has its benefits during cornering. There’s strong front-end grip - even in the really quite damp conditions in which the car was tested - it stoutly resists body roll, and its diff helps to keep things tidy. Excellent brake pedal feel and progression inspire plenty of confidence, too, and you soon end up relishing the process of using the car’s forward weight transfer to pitch its nose in to bends under braking.

The steering is still a bit of an issue, mind. It’s by all means accurate, but the rack’s leaden sense of weight errs on the ridiculous, feeling artificial and contrived even in Normal mode. Ramp things up through Sport and N modes and turning the wheel requires such effort that driving the Hyundai quickly is an experience akin to tackling a high-intensity crossfit circuit. It just feels needlessly physical, and while it exhibits impressive agility and responsiveness, it does feel like a bit of a brutish bully boy next to the considerably more delicate Mégane RS or the lithe and athletic Ford Focus ST.

The engine isn’t particularly memorable, either, despite the punch its 271bhp and 260lb ft pack. It seems happy to do things in its own time, with the full force of its accelerative urgency only occurring once it has been able to take a second to properly fill its lungs. It sounds a bit ordinary from behind the wheel, too, despite the best efforts of the rapid-fire pops and bangs that accompany full-throttle shifts near the redline to jazz things up a bit.

The six-speed manual is still a peach to use, though. It’s not quite as mechanically satisfying as that of a Honda Civic Type R, but it combines a well-defined shift feel with plenty of accuracy across the gate. 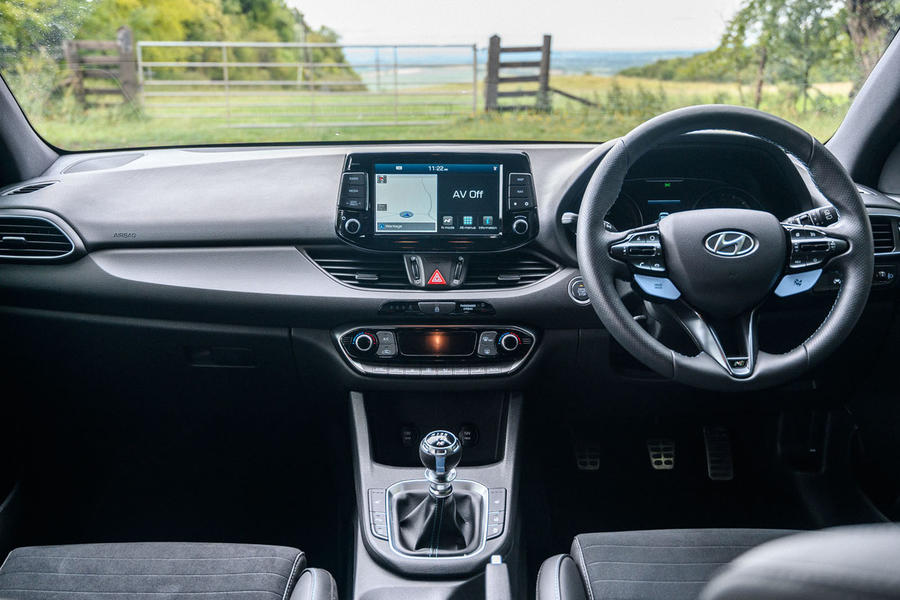 Some of the cabin fixtures and fittings feel less impressive, with plenty of dull, grey plastics used throughout. It’s a spacious, if slightly drab place to spend time, at least when you’re sitting still. Get moving and you quickly learn that the i30 N’s true character is far more colourful.

That said, those suspension tweaks won’t cause the i30 N to trouble the likes of the Volkswagen Golf GTI or, to a lesser extent, the Focus ST when it comes to everyday usability. This remains a pretty full-on hot hatch even when things are pared back, but also one that perhaps doesn’t utilise its aggressive set-up quite as deftly as you might hope.

But there’s still a good amount of fun to be had here, and its street-fighter outlook on life is endearing when you’re in the mood for a more rough and tumble driving experience. But as it stands, even with those suspension tweaks and a fraction more everyday liveability, the i30 N fails to outgun the current class masters in any one particular field as a hot hatch. 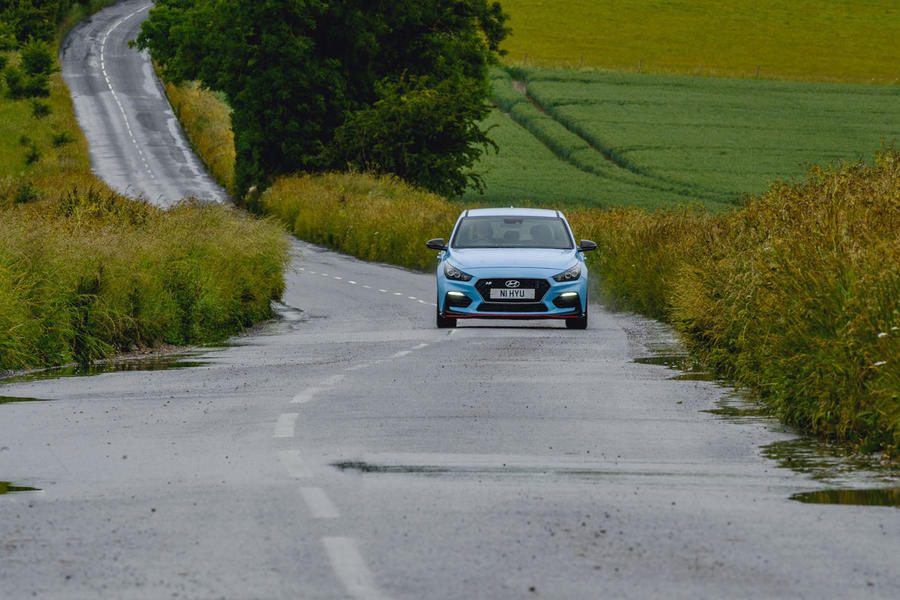 This is a great hot hatch and fantastic value. Have driven as a daily for two years. The custom mode is perfect allowing normal dampers and steering to be coupled with max sporting engine response, rev matching and an exhaust note to suit your mood! I agree the more sporty ride settings are too much for the road and the tweaks for 2020 are probably in the right direction. Smiles per pound this car takes some beating. Rather downbeat review I feel.

Trust autocar to be the only

Trust autocar to be the only motoring magazine to snipe and belittle the i30n when every other publication gives it nothing but high praise. As someone who's test driven the car and all its competitors virtually none of the comments /observations in the article rings true.

Pray tell, what is the reason you detest Hyundai so much?