From £25,0107
Share review
Even without its optional Performance Package, the base-spec Hyundai i30 N is still an entertaining and engaging hot hatchback
Share
Open gallery
Close

This is the base-spec, common-or-garden version of the Hyundai’s i30 N, the Korean manufacturer's inaugural hot hatchback.

That’s not to say there’s anything really common-or-garden about it though, only that it doesn’t have the optional Performance Package fitted to the car we road tested late last year.

This means it’s 2.0-litre, turbocharged four-cylinder engine develops 247bhp as opposed to 271bhp, it doesn’t benefit from an electronic limited-slip differential, and that it forgoes the variable exhaust valve system. It’s also fitted with smaller 18in alloys shod in 225/40 R18 Michelin Pilot Super Sport tyres, as opposed to the 19in wheels and Pirelli P Zero rubber you get with the Performance Package. Whereas that more seriously equipped car costs from £28,010, though, this version is £3000 cheaper.

Past these differences, the hot Hyundai is largely the same. You still get three-way adaptive suspension - comprised of MacPherson struts at the front and a multi-link arrangement at the rear - a reinforced clutch, launch control, a six-speed manual gearbox with a rev-matching function and a full suite of in-car infotainment systems that includes Apple CarPlay and Android Auto connectivity, satellite navigation and DAB radio. Considering the £25,010 asking price, it’s still quite a compelling little package. 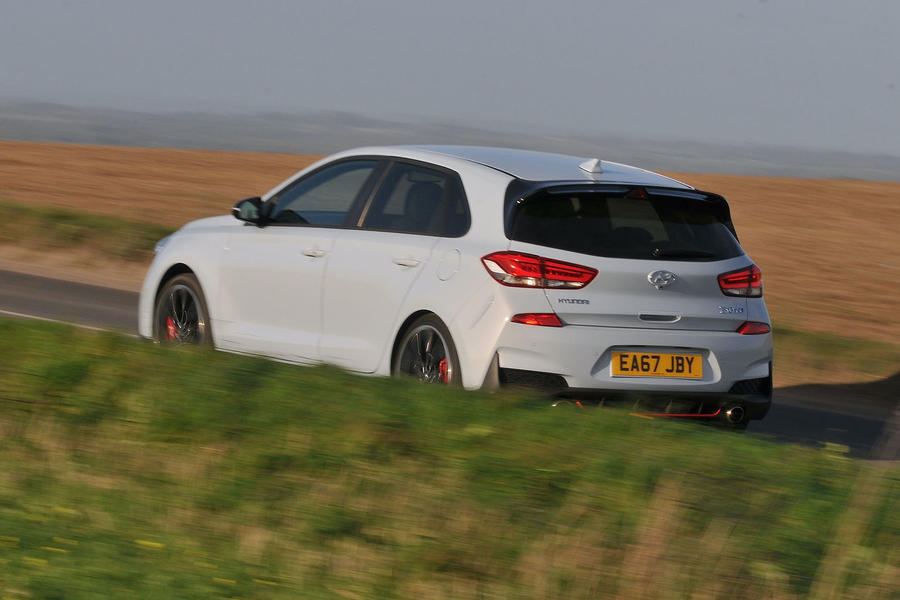 Even with that 24bhp power deficit to its Performance Package sibling, the standard i30 N doesn’t feel as though it’s in any way lacking. Its engine, from Hyundai's Theta family, develops the same 260lb ft as the Performance Package, which is delivered between 1450 and 4500rpm, and makes for a 0-62mph sprint time of 6.4sec.

It’s a muscular engine, too, and thanks to the presence of a turbocharger, that twisting power is easily accessible. In fact, the ease with which you can tap into it is almost a bit of a shame, because it means you won’t have to work the impressively slick six-speed manual gearbox quite as much as you might like to.

The engine will pull reasonably happily from just below 2000rpm, although the manner in which the power is delivered isn’t the most linear. Instead it feels as though it arrives all of a sudden, as soon as the turbos have spooled up. It’s not alarming, but is something to bear in mind before putting your foot down.

More troubling is the rather violent torque steer that comes with using all of the accelerator pedal’s travel. Coupled with front tyres that can scrabble for traction when you accelerate hard at low speed, it makes the Hyundai feel like quite the brute, and helps make a case for forking out the additional £3000 for the Performance Package with its electronic limited-slip diff and stickier Pirelli tyres.

A wealth of adjustability is available courtesy of five driving modes: Eco, Normal, Sport, N Mode and N Custom. Intriguingly, though, even in Normal the i30 N feels every bit the performance car it has been designed to be. The steering is surprisingly hefty, the ride is firm but not unforgiving and there’s plenty of responsiveness from the throttle and engine. Body control is well contained through faster bends, too, and you never get the impression that there’s any particular shortage of lateral front end grip. It’s arguably the best of all the driving modes, as dialling everything up causes the i30 N’s brutish character to become even more prevalent.

Sport mode is just about bearable on a bumpy country road, although particularly rutted surfaces can make it feel a touch unsettled. N Mode, meanwhile, isn’t for the faint of heart. At low speeds, the ride is so firm and unforgiving that the base of your spine feels as though it’s doing the dampers’ work for them, and the steering weights up even more without a properly noticeable increase in feel or communication with what the front tyres are doing. At this point you can feel like you’re fighting, as opposed to working with the car to thread it down a challenging section of road.

While you’d have to be on a particularly smooth track to really get the most out of N Mode, there is one big positive: the overrun. Lift off the throttle after a sustained period of acceleration, and small amounts of fuel will ignite in the exhaust, causing gunshot-like pops and bangs to explode out the back of the car. It’s a bit of hooliganism, and that’s never a bad thing. If you want those pops and bangs all of the time, but don’t fancy dealing with the harsh ride, N Custom will let you pick and choose between all of the available variables to create your own ideal driving mode.

While the driving experience shows where Hyundai’s time and money have been well spent, the interior gives the impression that it’s missed out somewhat. Aside from some relatively low-key (although comfortable and supportive) sports seats and light blue drive-mode buttons on the wheel, the i30 N feels largely identical to the car on which it’s based, meaning there’s scratchy plastic en masse.

That’s okay, though, as it pays to remember the Hyundai is a smidge over £4100 cheaper than a five-door Volkswagen Golf GTI, so levels of material richness or perceived quality were never going to be quite as high. That the i30 N has an additional 17bhp (albeit slightly less torque), comparable standard equipment and a five-year warranty shows its huge appeal as a value proposition. 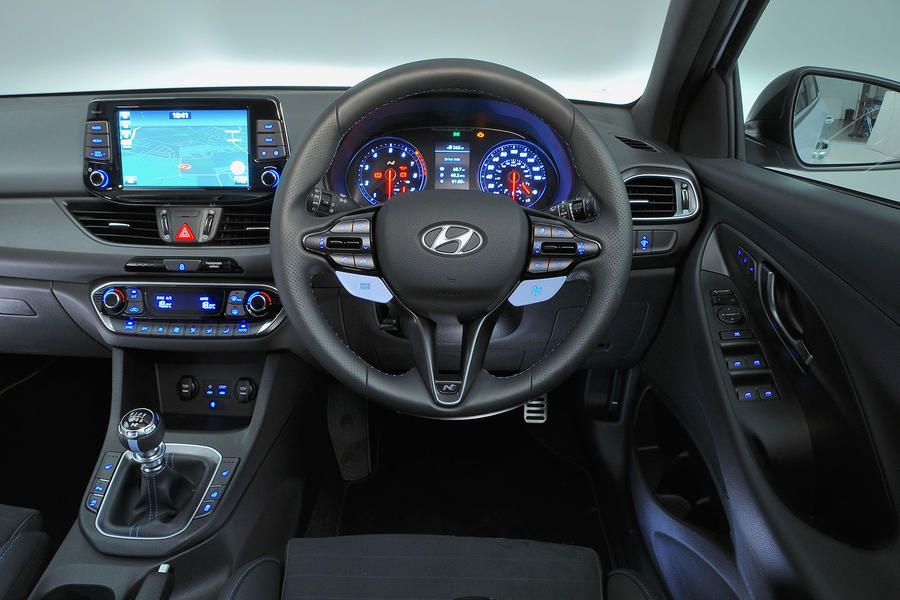 Although the i30 N may not feel as polished, manageable or have the same levels of pedigree in the hot hatch segment as the formidable Golf GTI, that’s not to say it’s any less likeable. Its engaging driving experience and at times savage disposition are to be savoured, as is its ability to settle down and become a reasonably comfortable everyday hatch.

That it comes with a five-year warranty, space in the back for two adults, a useable 395-litre boot (15 litres more than the Volkswagen has), and that £25,010 price tag only serve to make it an even more attractive proposition in a highly competitive market segment.

It may not be the sharpest tool in the proverbial hot hatch shed – a Honda Civic Type-R has more power and keener handling, a Golf GTI is more well-rounded and upmarket and a RenaultSport Megane a superior chassis - but on the merit of its value alone, it’s certainly worthy of your consideration. 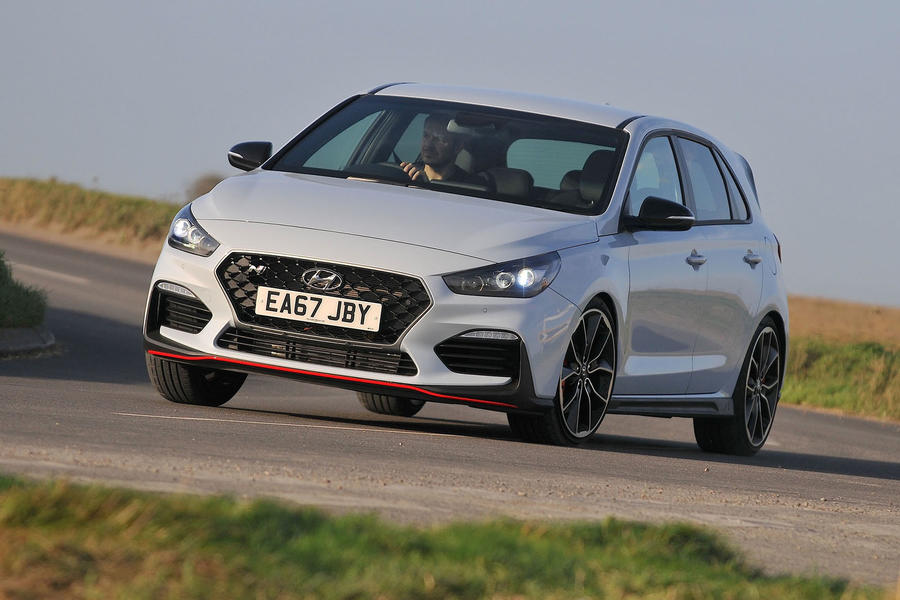 17 April 2018
A Tourer version would give the Octavia vRS serious competition.

For the rest of it, there are already complaints of some i30 N (german) owners about a bit too much turbo lag and the not-so-good mileage --- compared with similar hot hatches -- plus a bunch of glitches (minor ones, ok, but irritating, including seats/interior chirps-squeaks.)

For its price it seems an honest proposition though. Even if, personally, I don’t like the new Hyundai/Kia *teutonic* style direction imposed by Peter Schreyer.

I think this sits in a different category from the Type-R, more the 308Gti approach. I'd cretainly look at it, but it's a bit bland-looking. Hyundai need to up their design game - it's still pretty derivative, and that front-end could be from any number of non-premium brands.

I think this sits in a different category from the Type-R, more the 308Gti approach. I'd cretainly look at it, but it's a bit bland-looking. Hyundai need to up their design game - it's still pretty derivative, and that front-end could be from any number of non-premium brands.

Regarding dull looking, I think the new fastback i30 looks a lot better and hopefully will look even better in N spec.

All the press photos seems to have the car in that dull light blue/grey tone and it does nothing for me. Add a little more colour and it would look much better.