From £25,0108
Firm’s coupe-styled second stab at a hot hatch is slightly more restrained but has become a better daily driver – while staying on the right side of entertaining
Open gallery
Close

That Hyundai could challenge the hot hatchback establishment on its first try should come as little surprise, given the man in charge of its performance arm.

It’s more impressive that in little under 18 months, Albert Biermann and his N division team have learned lessons from the debut attempt and returned with a more refined follow-up. The Fastback N arrives with a level of maturity that goes further than its liftback tailgate.

Not that the exterior styling gives anything away, with an identical front end, matching 19in alloy wheels and Pirelli P Zero tyres. The rear gets a more sculpted diffuser, prominent twin exhausts and bootlid spoiler, but the similarities are clear to see.

Performance is unchanged from the hatch, courtesy of the same 2.0-litre turbocharged ‘theta’ engine - albeit only in 271bhp Performance guise. With the majority of i30 N customers opting for the more powerful variant, Hyundai hasn’t seen the need to offer British customers the lesser 247bhp powerplant. It can reach 62mph from a standing start in 6.1sec, matching the hatchback.

The differences have been achieved not through mechanical changes but software tweaks. Both cars share the same electronically locking front differential, adaptive dampers and electronic power steering system, but Hyundai has overhauled the settings for each one to tone things down from the violently firm hatchback. Softer suspension also promises to deliver a more supple ride.

You may have already read Matt Saunders’ first impressions from the car’s European launch in Gran Canaria (if not, you can find them here), but this is the first time we’ve had the chance to drive the Fastback on British roads. And cold, wet, snow-covered ones at that. 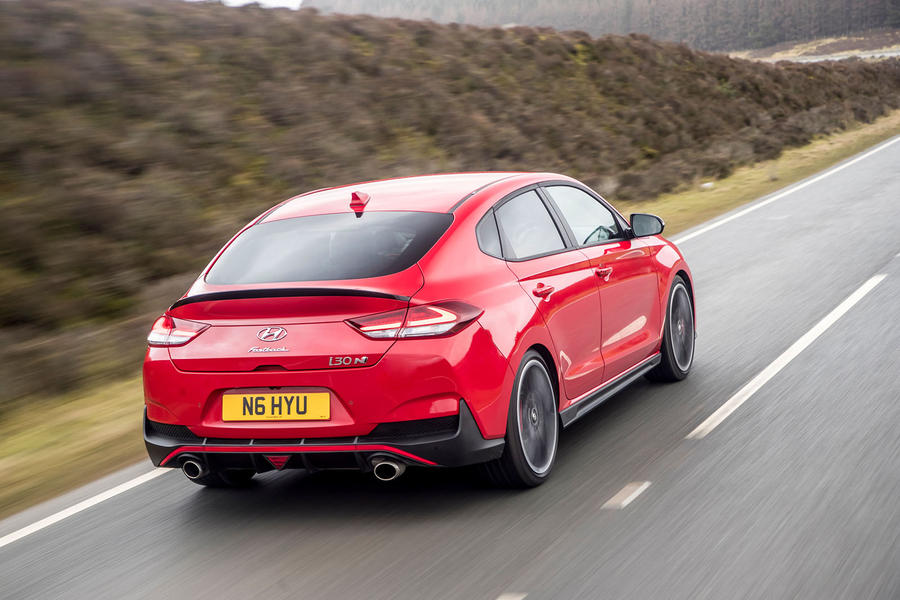 The Fastback is familiar yet different. A few welcome styling tweaks have made the cabin that little more engaging, with red trim panels and stitching on the steering wheel and gear shifter, but the layout remains unchanged.

That means a low-slung driving position, comprehensive 8.0in touchscreen infotainment and a digital dash full of neat touches, like the multiple sets of LEDs that tell you when to shift up, or whether the engine is still warming up after a cold start so you know not to push too hard until it’s up to temperature.

The new bodystyle has eaten slightly into the amount of head room available to the back row, which could make it a bit of a squeeze for taller adults, and rear visibility takes quite a dent too. On the other hand, it allows for a more capacious boot; the hatch has a 395-litre capacity, while this can hold 450 litres.

The Fastback begins to differ from the hatch as soon as you start it up, with an exhaust note that’s more subdued until you decide to explore the upper reaches of the rev range, where it finally delivers some characterful pops and bangs. But even then, the aural impact just isn’t as great here.

The precision action of the ball-shaped gearlever makes slotting each new cog a joy, the taut six-speed ’box up there with the best in the class. The pedals are spaced a little too far apart for heel-toe shifting, but automatic rev-matching in the sportier driving modes goes a long way to make up for it.

That the more aggressive driving modes are now usable on British B-roads without requiring chiropractic intervention is the biggest surprise. It still rides firm, as you’d expect from a performance hatch, but not so much that you’d actively avoid the wheel-mounted drive mode button. The steering feels artificially heavy in N mode, though, meaning a dive into the comprehensive N Custom mode is needed to get the best from the car.

It’s here, with the engine response dialled up but steering and suspension kept at their less aggressive levels, that the Fastback feels most composed and engaging, if not quite to the same level as a Honda Civic Type R or Golf GTI.

There are ample levels of power on tap, delivered in a surge of mid-range thrust that puts the Fastback among the fastest front-driven hatchbacks when grip allows. Even on dry Tarmac, though, sending all 271bhp to the driven axle sees traction easily broken. On a cold, snow-dusted January morning, it was an all-too-common occurrence at traffic lights and junctions, even under a light foot. 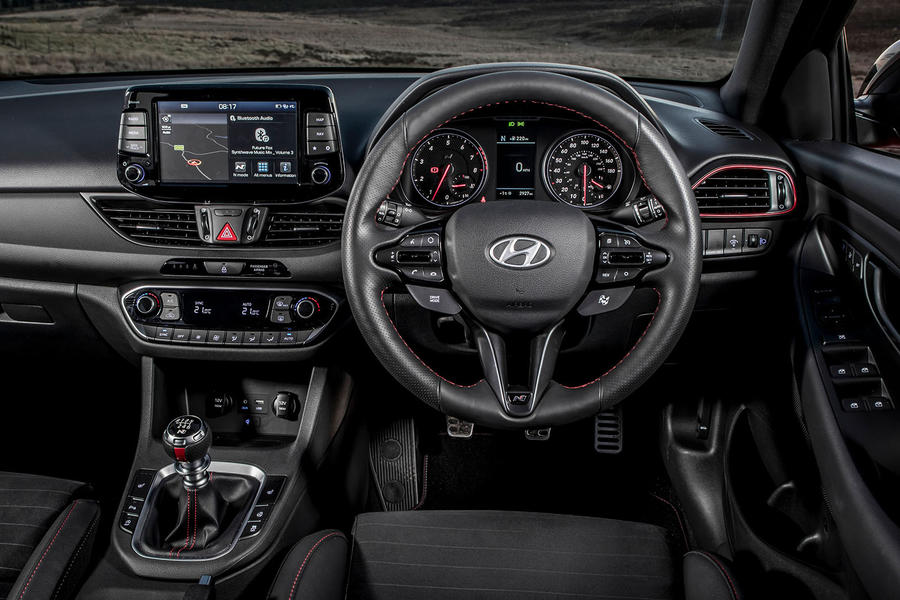 The Fastback N isn’t a sequel to the i30 N. It’s more of a B-side, a slightly different take on the same formula. Depending on what you’re after from a hot hatchback, it may be the better version.

The toned-down ride and handling unlocks more of the available driving modes for everyday use, while the more sedate exhaust note allows for incognito journeys should you want them. Anyone searching for something raw and shouty will be better served by the hatchback, which isn’t afraid to make itself heard. This is more understated and, in this tester’s opinion, all the better for it.

Ultimately, though, these changes aren’t enough to propel the i30 above the current crop of hot hatches on anything other than sheer value. Rivals continue to deliver a more complete driving experience - even if they struggle to match it on price. 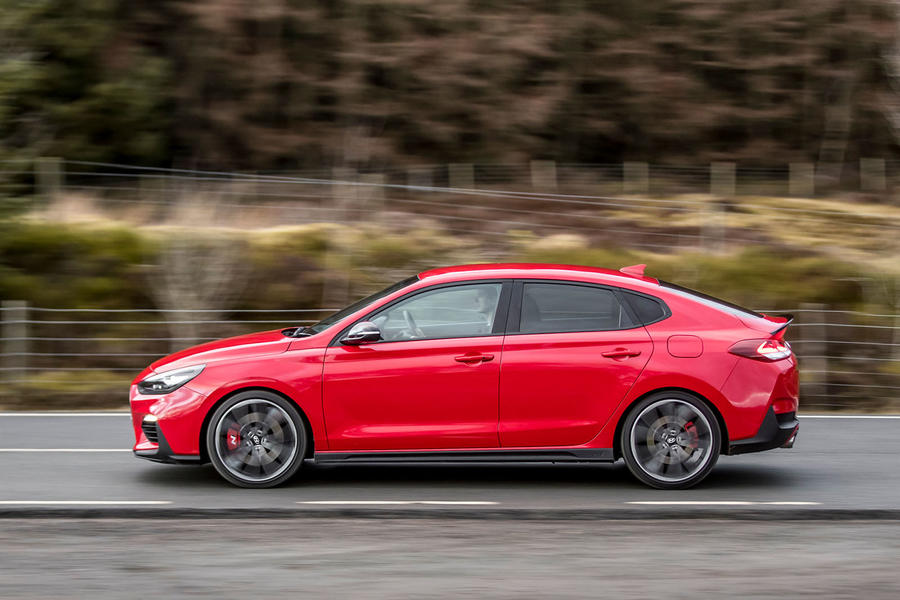 I think this car has the

I think this car has the foundation body of Korean company’s impressive i30 N high-performance hatchback and dresses it in a more elegant five-door coupe body. However, the most impressive thing is its, color is damn awesome.

Really pleased Fastbacks are coming back, always think they look for 'Coupe' than a standard hatchback.  Let's hope it sells in decent enough numbers to warrant a mark 2 etc.

Probably more a competitor to

Probably more a competitor to the Octavia VRS than the Golf GTi, the extra length gives the car more presence.

Years ago all hatchbacks looked like this, fastback, until the fashion became vertical tails.