From £25,0108
Hyundai’s hot hatch follow-up act is a swoopy saloon that also happens to be a great value driver's car
Open gallery
Close

The Hyundai i30 Fastback N is proof that its Korean maker doesn’t intend to hang around with the roll-out of its new breed of performance models. It’s only eighteen months since the launch of the i30 N hatchback and now, having already introduced the Veloster N in markets other than ours, the firm is piling in with model instalment number three.

And these are early days, you might think, for i30 N hatchback buyers to be trading in their cars. But, from an engineering perspective at the very least, working so quickly probably is a smart move. Hyundai uses a great many proprietary components for these cars, after all, and it stands to reason that the more development opportunities they can lever into a short space of time for the various driveline, suspension, steering and electronic governance systems in the N-brand armoury, the more quickly those systems – and the cars they’re attached to – should improve.

Welcome, then, to 'Hyundai N-car v3.0'. Based on the elongated 'coupe-like' i30 Fastback introduced to the UK late last year, the i30 Fastback N uses the same 2.0-litre turbocharged ‘Theta’ petrol engine as the upper-level ‘Performance Package’ version of the hatchback N, as well as the same rack-mounted electric power steering system, adaptive dampers, electronically locking front differential and active exhaust.

But thereafter the Fastback N differs from its sibling with the software tuning of those various electronically controlled systems, and in a few finer suspension details: rear axle wheel geometry, front axle rebound spring calibration, anti-roll bar bushing and bumpstop stiffness. Perhaps most tellingly of all, the i30 N hatchback’s front suspension has been softened off slightly for this car, in terms of both vertical and lateral stiffness, with the aim of creating a more rounded, sophisticated performance character. 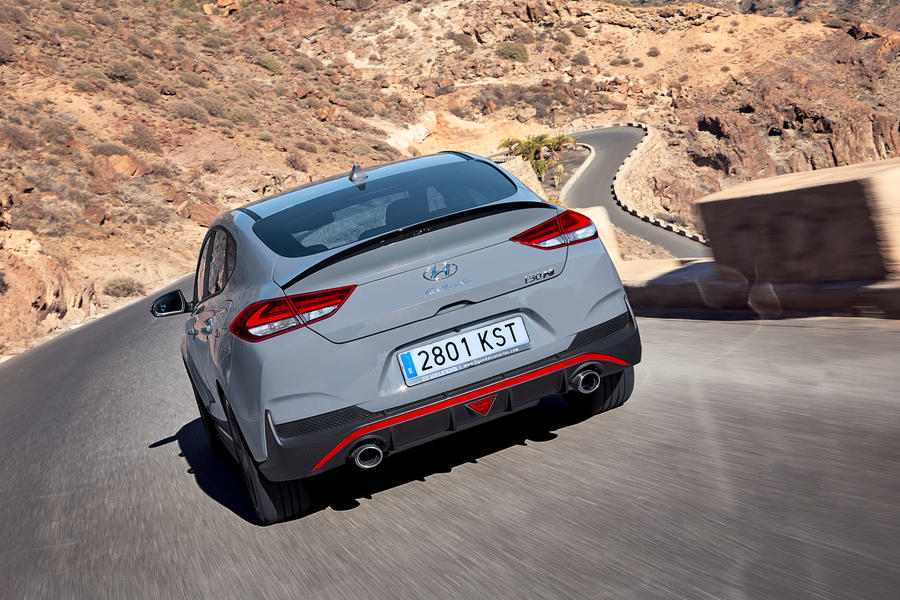 From behind the wheel, this is a pretty minor and incremental shift in course and agenda. The Fastback N’s driving experience feels at least 95 per cent the same as that of its hatchback relative.

To access the car you duck your head past a slightly lower roofline than the i30 N hatchback has on your way into the driver’s seat, where you’ll find a welcome extra dose of colour around the cabin in front of you; there’s a bit of red stitching here and red trim there, the likes of which the i30 N hatchback was crying out for.

The driving position might be a touch lower than that of the i30 N hatchback, but if it is, it can’t be by much. The controls are well laid out, with the exception of pedals that are still too widely spaced to allow you to bridge the gap between brake and accelerator pedal with your right foot for heel-and-toe gearchanges.

Further rearwards, the Fastback body means you get slightly less second-row headroom than the hatchback would provide, so adults over six feet tall may struggle to get comfortable; but you also get a 55-litre boot space upgrade to 450 litres in all, which is presented under a liftback rear hatch that makes access easy.

On the move there’s the same slightly over-complicated mix of driving modes to select from here (five of them in all, managed by two different buttons, the last being a ‘custom’ setting that allows you mix the calibration of each adaptable powertrain, suspension and steering system to your own liking). As a rule, each ‘set menu’ setting (Normal, Sport, N mode) delivers a marginally softer, calmer and more progressive feel than their equivalents did on the i30 N hatchback: which, for road driving at least, is good news. But often, depending on how and where you’re using the i30 Fastback N, none of those settings feels like it ideally suits the car. Use the racier modes on the road and the steering can feel leaden, the ride flat-footed and needlessly aggressive, just as the hatchback often felt. Stick to ‘normal’ and the car’s more compliant but less effusive and enticing.

Get the car configured just right, however, and the Fastback N’s suspension and steering begin to work well – particularly so in ‘custom’ mode, though you have to wrestle with a discouraging amount of complexity in the process. This puts the car in a groove in which well-judged steering weight and perceptible feel come mixed with well-matched steering directness and chassis response. It’s a groove in which outright lateral grip isn’t sky-high and handling isn’t as indulgently, delicately poised as it is in certain rivals, but the chassis definitely holds up its end of the bargain and makes the driving experience fast and involving.

The engine was never the best part of the i30 N hatchback’s driving experience, and since it’s basically the same here at it was there, it’s not the Fastback N’s greatest asset – although it’s not a big disappointment either. The 2.0-litre turbo four makes plenty of power and torque, and endows a performance level that’s as great as you’d want most of the time. It brings the chassis’ various qualities nicely to bear, too.

But it’s not the kind of engine to take your breath away; there’s just a hint of workmanlike ordinariness about its style of delivery that the full force of 271bhp going through the front tyres narrowly fails to shake off. And it sounds as you expect of an engine of that ilk. Nice – but not as rich, exciting or special as some. 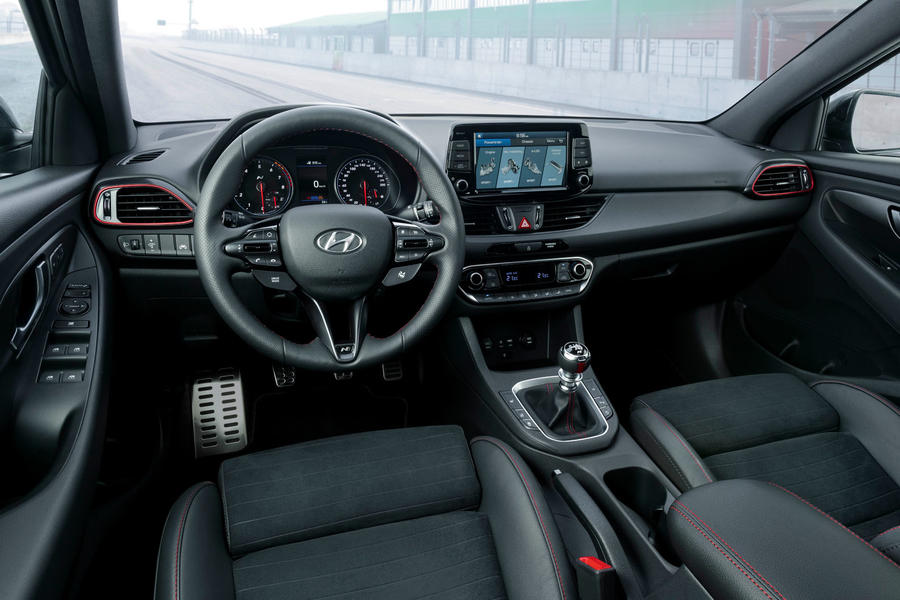 The one big draw Hyundai UK hasn’t forgotten about with this car is the one we’ve yet to mention.

There will be no 247bhp entry-level version of the Fastback N (apparently less than two per cent of UK customers wanted an i30 N hatchback in non-Performance Packaged form), and what might have been the upper-level 271bhp version will be priced at a fiver less than £30,000; only £500 more than the equivalent five-door i30 N. So this is still a great-value driver’s car – and one of a dwindling number of really involving full-sized ones available with a price tag that starts with a two.

If the driving experience has a fault, it may be that it still doesn’t land one killer blow: there’s nothing here to match the incisiveness of the handling of a Renault Megane RS, the tactility and high-rpm thrust of a Honda Civic Type R, or the usability and adaptability of a VW Golf GTI. Is there real dynamic star quality in evidence?

Perhaps not. And, from Hyundai, I fear that’ll be a long time coming. But if you can stop looking for the i30 Fastback N’s ace in the pack and instead just enjoy what’s in front of and underneath you, there’s a lot to like about it. More, certainly, than just an appealing price and a swooping roofline. 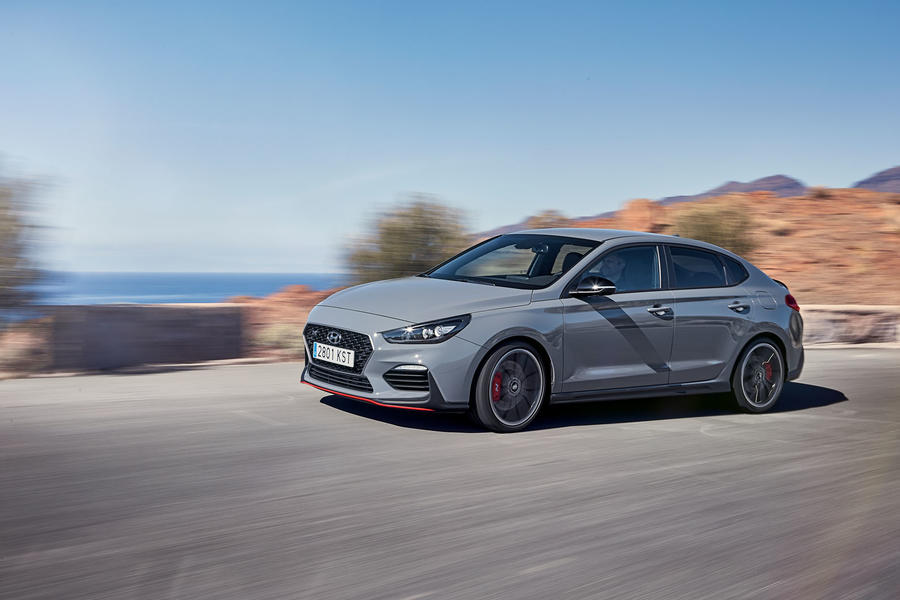 I really like the look of this, works better than the standard hatch.
nicebiscuit 16 January 2019

Yeah I know noone actually BUYS cars any more.  But if they did, surely thats a pretty good private buy, complete with the 5 year warranty that shames the Germans.

As a lease though - well...  some of the deals going last year on Golf Rs and the like, I cant see why anyone is going to bother.  Not even sure why the press bother to quote list price any more.  Average PCPS and leases would give a better idea...