From £28,0956
Share review
New petrol engine and top-end Ultra Prestige spec help broaden the Crossback's appeal, but do little to help it stand out in a crowded market
Share
Open gallery
Close

This is the first petrol-powered variant of DS Automobile’s ‘avant-garde’ 7 Crossback; the first all-new car to be launched under the flagship brand since it split from Citroën in 2014.

While we’re already well acquainted with its oil-burning sibling, which participated in our compact SUV mega test earlier this year, this is the first time we’ve had a go in the petrol-engined model.

Under the bonnet you’ll find PSA Group’s familiar 1.6-litre turbocharged four-cylinder motor, which in this application produces 222bhp and 221lb ft, all of which is sent to the front wheels via an eight-speed automatic transmission. Later this year, a lesser 178bhp version of the same engine will also be made available.

The 222bhp petrol engine is available on all trim levels apart from the entry-level Elegance model. Prices for variants equipped with this engine start at £34,990 for the Performance Line model and rise to £43,190 for our top-of-the-range Ultra Prestige test car.

The latter is a fairly significant sum, but standard equipment is generous, with 20in alloys, a Focal premium hi-fi system, front and rear parking sensors, a reversing camera, full leather upholstery and much more besides all included in the asking price.

Power plant aside, it’s all DS 7 Crossback business as usual. The exterior styling that - to this tester’s eyes, at least - is reminiscent of Audi’s Q-cars remains, as does the active suspension and plush interior. 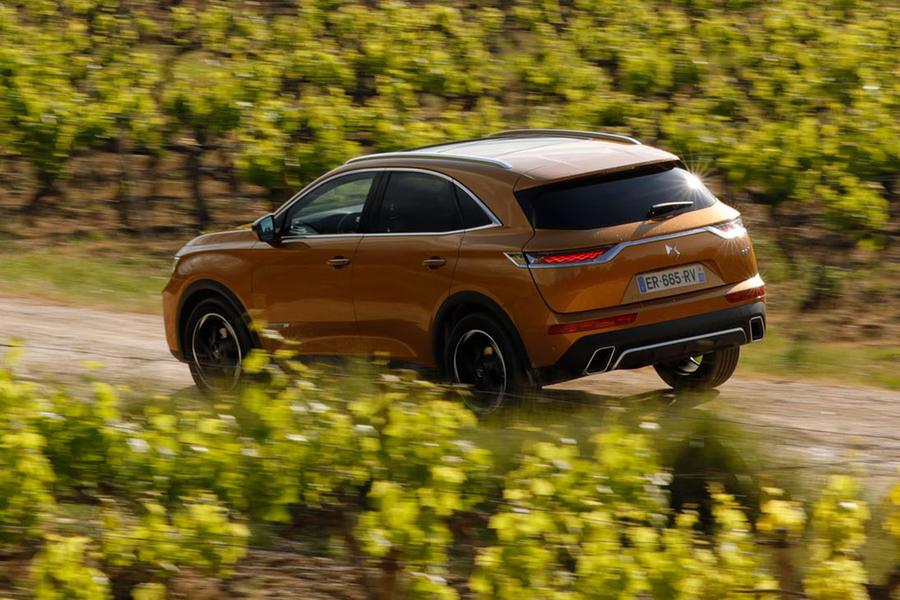 On the whole, the new power plant suits the laid-back, cruisy character of the DS 7 Crossback well. Acceleration is smooth, though not particularly hurried, while the engine note is largely refined - until you stray above 4000rpm or so, at which point it does become fairly loud and intrusive.

However, as its 221lb ft is available from just 1900rpm, the occasions on which you’re required to really rev the engine out are limited mostly to overtaking manouvres and motorway slip-roads. Once you’re up to speed though, it returns to its default hushed setting.

The eight-speed transmission is for the most part smooth, although sudden throttle inputs can give way to a bit of shunt, particularly at low speeds. Fixed paddleshifters are mounted on the steering column and allow for manual gear changes; helpful when you’re travelling downhill and need to engine brake, although it’s unlikely you’d use them at any other time. The DS 7 just doesn’t feel as though it’s been set up to compliment a more enthusiastic driving style.

That’s okay, though. It’s focus has always been more on comfort than outright dynamism, and as with the diesel-powered versions it fulfills this brief nicely. The ride is soft and cosseting - perhaps feeling slightly under-damped at times - but for the most part it irons out imperfections in the road surface nicely.

This is largely down to its active suspension, which, when set to ‘Comfort’ mode, uses a camera to analyse the road ahead and prep the dampers accordingly. While there is a degree of lateral roll through bends, as well as vertical travel over undulations, the DS 7 never feels particularly out of line or unbalanced, but it’s spongy nature will dissuade you from really hustling it along.

The steering rack, meanwhile, is relatively slow in its gearing - three turns lock-to-lock - but is precise enough, if lacking in feel.

As for the interior, it maintains its slightly odd blend of luxurious and not-so-luxurious materials, with attractive leather-upholstered and engraved surfaces contrasting against easy-to-find scratchy plastics. The seats are particularly notable for their sumptuousness, although they would benefit from a greater level of bolstering and vertical adjustability. You sit perched a touch too high even in their lowest setting.

Isolation is excellent, though; in our test car there was minimal wind noise, and the 20in alloys generated only a tiny amount of road roar. This may have been a product of the incredibly smooth roads that made up our French test route, though.

Cabin space, meanwhile, is impressive. Those sitting in the rear will find a comfortable amount of leg and headroom, while the DS 7’s generously sized 555-litre boot is easily accessible thanks to a large opening and negligible load lip. By comparison, the Volvo XC40 - our current class leader - offers 432 litres of boot space. 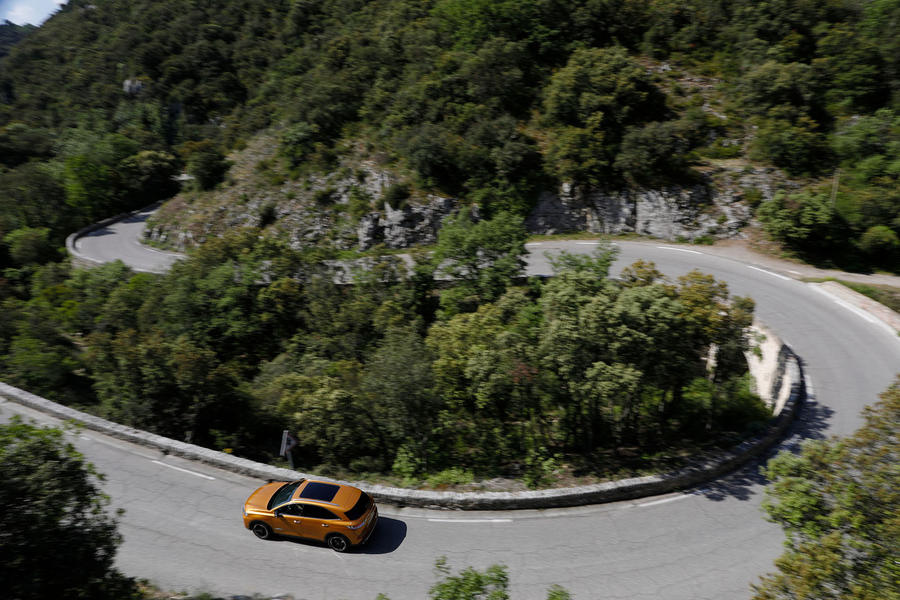 The petrol-powered DS 7 Crossback certainly has its merits. The powertrain is smooth and mostly refined and with a claimed fuel consumption figure of 47.9mpg it’s economy is commendable, too. With CO2 emissions of 135g/km it also qualifies for a lower benefit-in-kind rating than the 178bhp diesel variant, standing at 26% as opposed to the oil-burner’s 27%.

However, in flagship Ultra Prestige trim, residuals forecasts aren’t promising, with our experts expecting the DS 7 Crossback to retain just 42% of its value after 36,000 miles and 36 months of ownership. A fully-loaded Volvo XC40 T5 in Inscription Pro specification will not only hold 53% over the same period, but is nearly £5000 cheaper in the first place. That the Volvo is more dynamically rewarding, not to mention a more well-rounded package, only serves as an added bonus.

So while the introduction of a petrol engine to the DS 7 Crossback line-up has had the effect of broadening its appeal, it hasn’t done so in a way that’s radical enough to make it the stand-out option in an already crowded market segment. 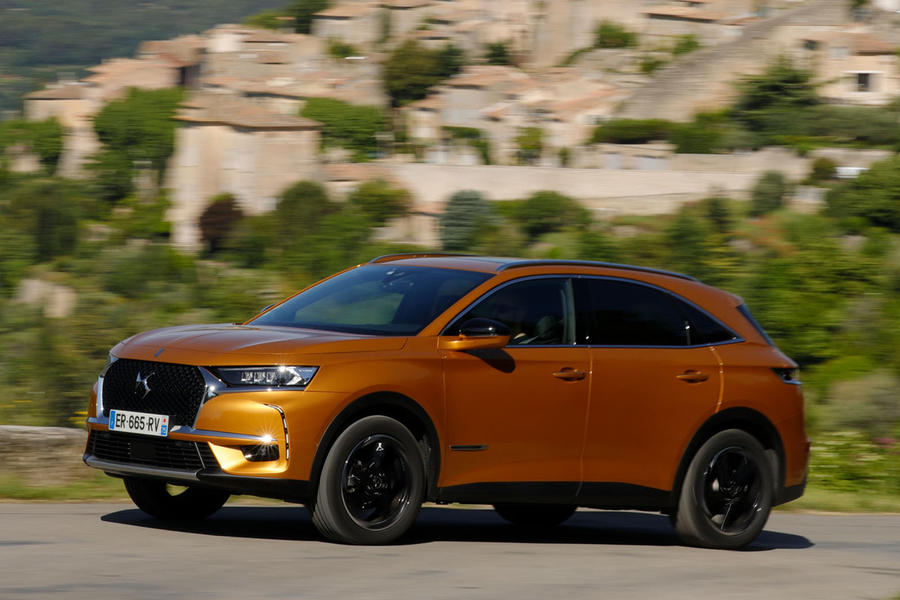 I’m reading it liking comfortable seats, quiet, reasonable turn of pace then I see £43k for a reskined Citroen 1.6 4 pot petrol. Rememer it's upagainst the XC40, GLA (?) and Q3 (new bigger version out later this year).

Sorry DS but you can’t buy class, you have to earn it.

Have to say it doesn’t look like all the others, it has some French flair about it.....

The DS5 was/ is a far more interesting design than this.  I'm surprised that a style-led brand (which I think is how DS wants to be positioned) has shifted itself so much in the mainstream and is just relying on bling to differentiate its offerings.

Ive not made my mind up about

Ive not made my mind up about these yet because I haven't seen one in the flesh. Has anyone? I want to like it, indeed, I want to like anything that challenges the automotive status quo, but the reviews are quite negative (are they accurate though?) about it achieving its declared goals.

One more thing: please, Autocar, teach your staff the difference between its and it's - and to be consistent. As an organ that uses language as part of its toolbox (<- note: its toolbox), you should get this basic bit of English correct. Year 6 kids have just taken their SATs and are expected to know this simple stuff.

Unfair to compare it to the

Unfair to compare it to the XC40, Q3 or E pace, its a fair bit bigger and half way to the XC60, Q5 sizes so pricing should be inbetween. Which it is, infact not bad value.

I keep reading how this is

I keep reading how this is the first all new car to be released by DS since it split from Citroen. I preferred the style of the models released before then.

Still only FWD, a Faux SUV

23 May 2018
Still a FWD only 'SUV'. Like a Matra Simca Ranchero.
Volvo's XC40 has AWD so you don't get stuck on slippery surfaces.

Bad pricing strategy by DS in

Bad pricing strategy by DS in the UK having just played with the configurator, a 180bhp Auto Prestige is a hell of a lot of car, the kit list is loo roll long but if you add metallic (essential as it makes the lease cheaper) and the Autopilot pack to make this into a formidable relaxed distance machine then it just tips over the important £40K point and the running cost bump quite a bit. If they shaved just a few hundred off the list price it would be in a better place sales wise. You would expect UK sales managment to be a bit more clued up.

DS are probably accepting there will have to be major discounting the likes of Volvo and BMW won't have to, so are starting high, certainly some of the DS7 leases prices on our system are not too bad suggesting the lease company are getting them pretty cheap. Trouble is its a double edged sword as company car tax is on list price not discounted price so tax burden is still high to the driver.