BACK TO ALL NEWS
Currently reading: 2017 DS 7 Crossback priced from £28,050
UP NEXT
New 2023 Mercedes-AMG GT: upcoming coupe spotted testing

The DS 7 Crossback, the French brand's first European-market SUV, is available to order now, priced from £28,050 for entry-level Elegance models.

Prices rise to £43,535 for the highest-powered diesel model in range-topping Ultra Prestige trim. However, the most expensive model, at around £50,000, will become the four-wheel-drive plug-in hybrid variant when it hits the road in 2019. This will be badged E-Tense, after DS’s electric supercar concept.

The car was launched priced from £42,650 in La Première edition and was previewed with a special Presidential version used by new French president Emmanuel Macron. 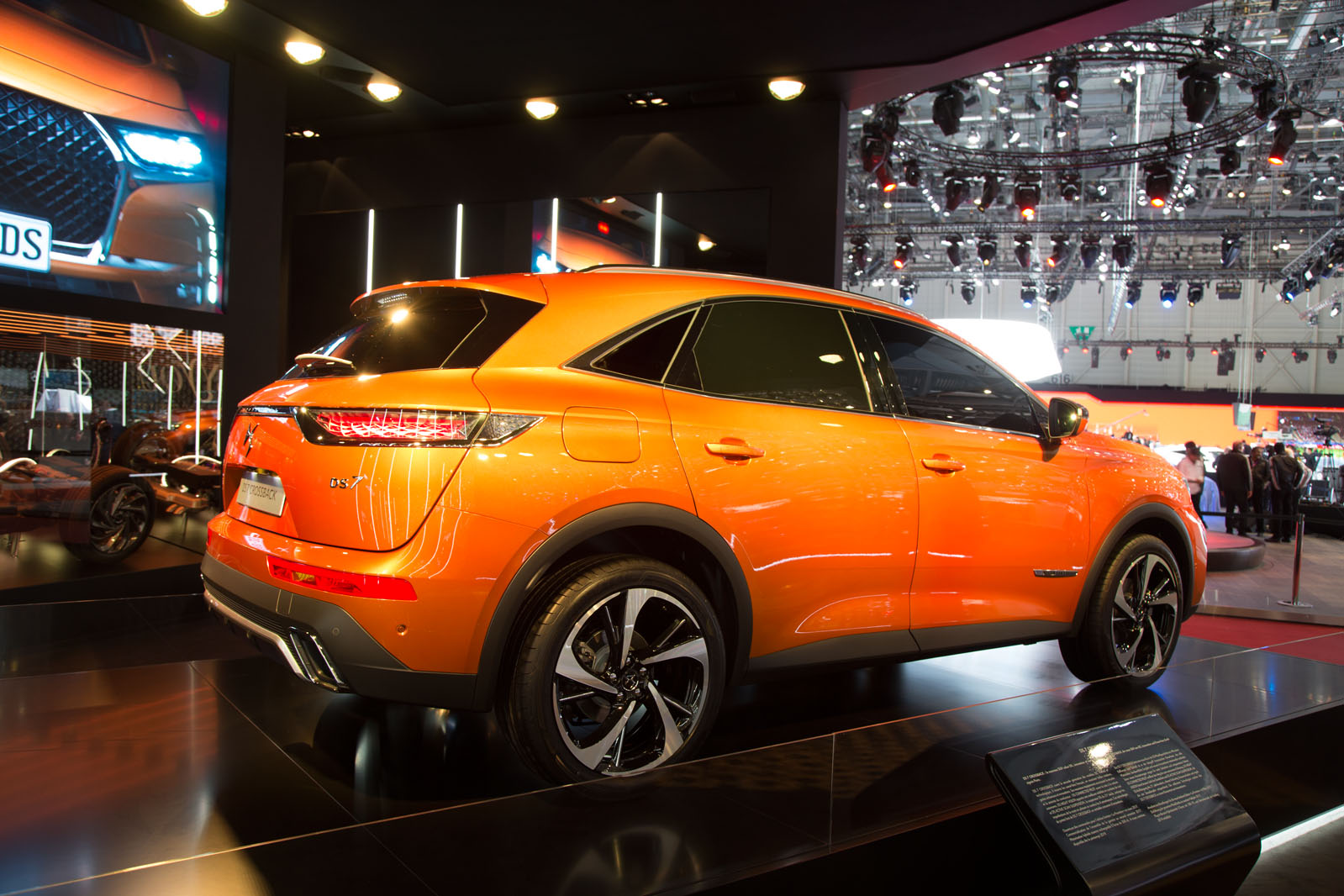 DS's active suspension scanning system is also fitted as standard; it uses a high-mounted camera near the top of the car's windscreen to ‘read’ the surface of the road as it approaches, pre-setting the stiffness of the electronically variable dampers (which will be also be standard on other high-trim versions) to prepare for larger bumps and compressions as they arrive.

DS claims that the Active Scan system will be a segment first, although Mercedes-Benz already offers a similar Magic Body Control system on its pricier models.

The most potent petrol and diesel engines are offered with the La Première trim. Both are turbocharged 1.6-litres, offering 221bhp and 178bhp respectively. They come mated to a new eight-speed automatic transmission. 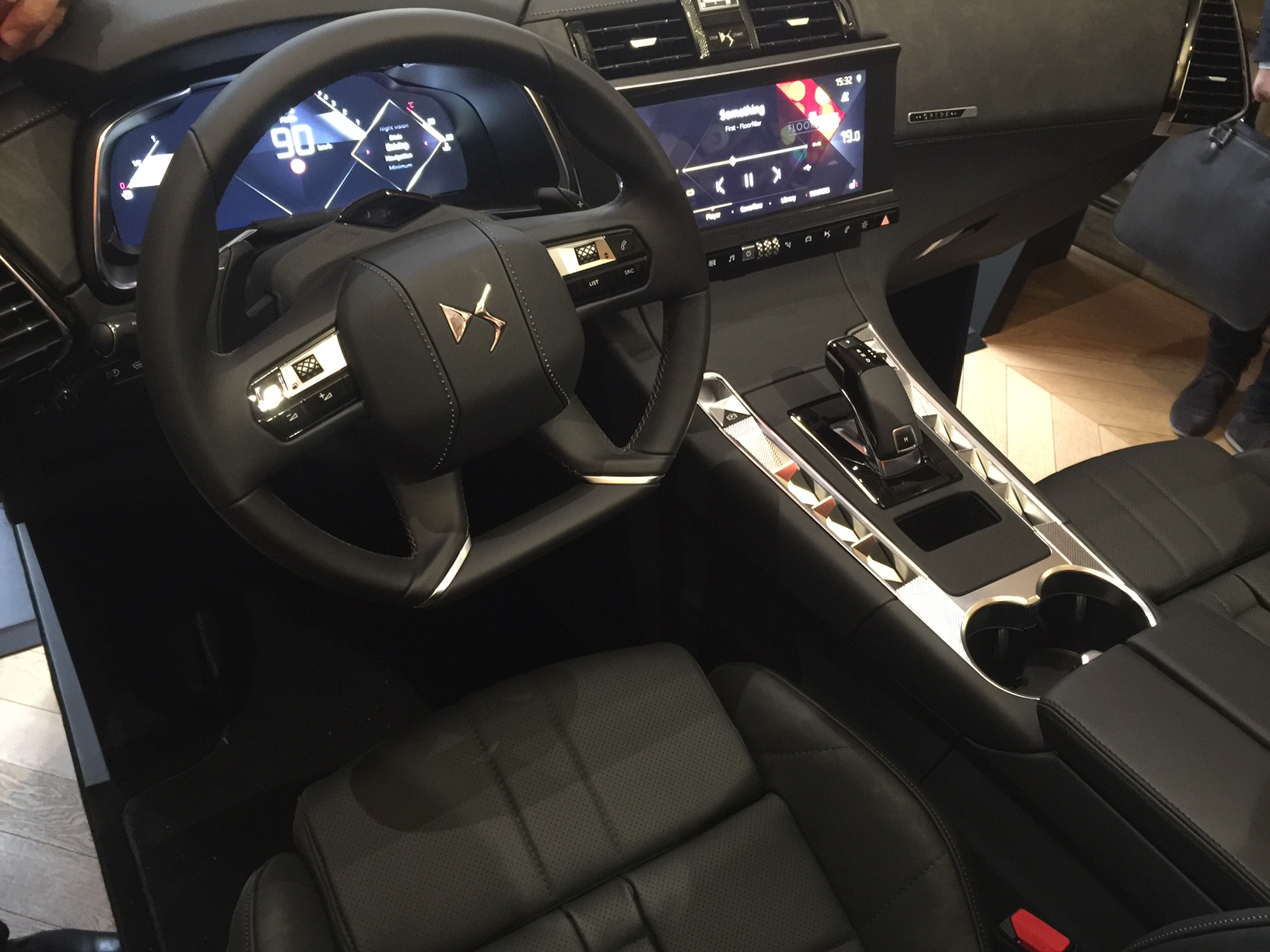 When the rest of the range goes on sale, a wider selection of powertrains will be offered with the DS 7. Added to the aforementioned units will be a 128bhp 1.2-litre three-cylinder petrol and the 1.6-litre petrol in 178bhp guise. A new ultra-frugal 1.5-litre diesel engine, named DVR, will be the second diesel option.

The 1.5 diesel and 1.2 petrol will have a six-speed manual gearbox. All other engines will come with the eight-speed 'box, which will also be an option on the 1.5 diesel.

For now, the DS 7 will be offered with front-wheel drive only. PSA Group engineers have confirmed that there are no plans for a four-wheel-drive 7 Crossback with a mechanical system.

The only model with a powered rear end will be the range-topping hybrid version due in 2019. This model will have two 107bhp electric motors working in conjunction with a 197bhp version of the 1.6-litre turbo petrol, giving a total output of 296bhp. 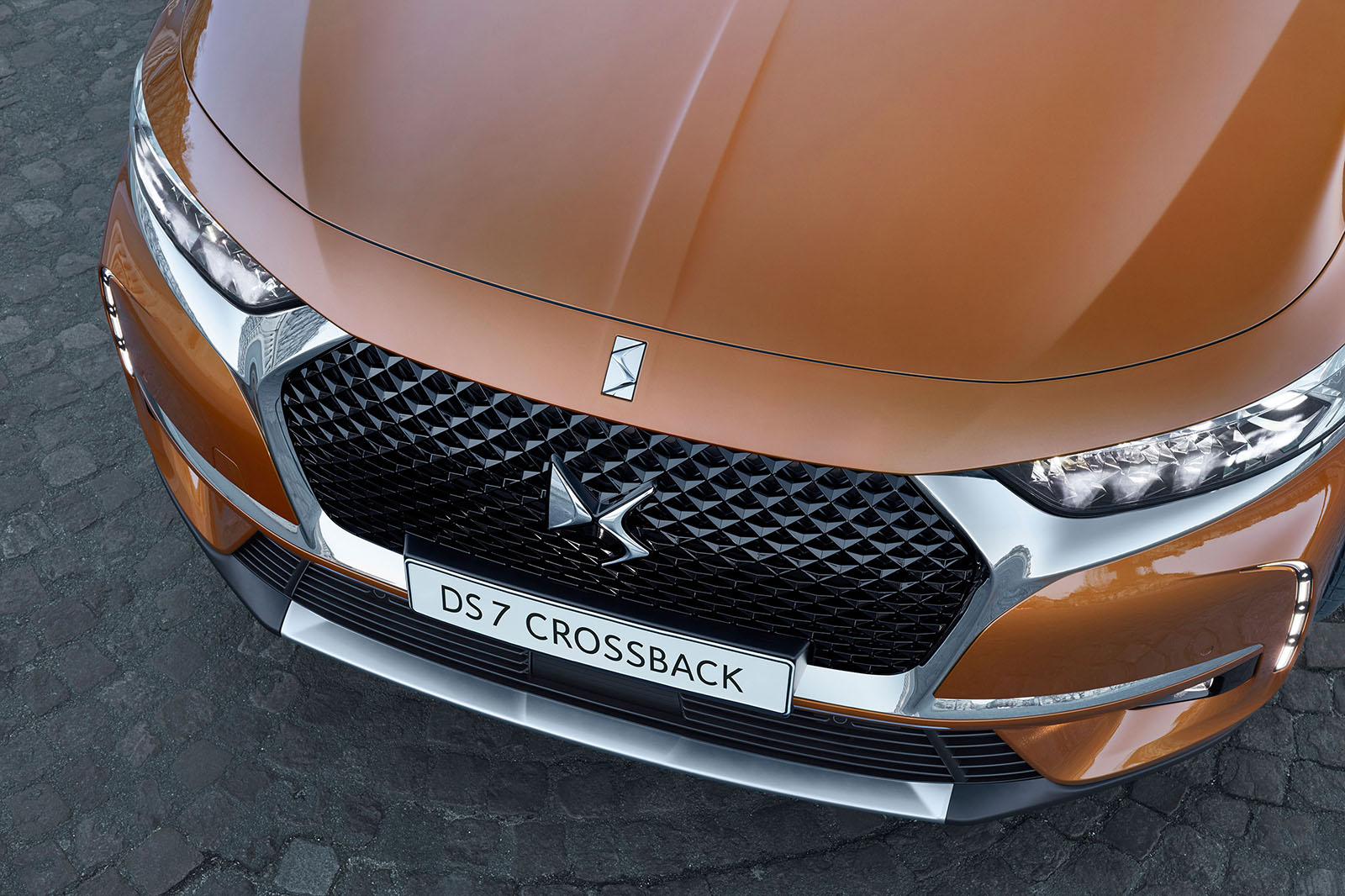 DS says all models (not just La Première) will have upmarket materials in their interiors, as well as potential for customisation that’s unprecedented for a PSA car. The amount of passenger space in the 7 Crossback is generous in both the front and rear, and plusher versions are set to get electrically tilting rear seats.

The brand is keen to market the 7 Crossback as a technology leader, so even the entry-level version will get active LED headlights with three powered moving elements. These turn to give a ‘welcoming animation’ as the car is unlocked and allow different lighting modes, with longer-range beam projection at higher speeds and corner illumination (something Citroën effectively invented on its DS saloon in 1967).

Elaborate tail-lights, each with 42 LEDs, will also be standard and an infrared-based night vision system capable of identifying pedestrians and animals will be offered as an option. DS has also confirmed plans to offer the 7 Crossback with a semi-autonomous Connected Pilot driving system. A state-of-the-art Focal Electra audio system will be on offer, too. 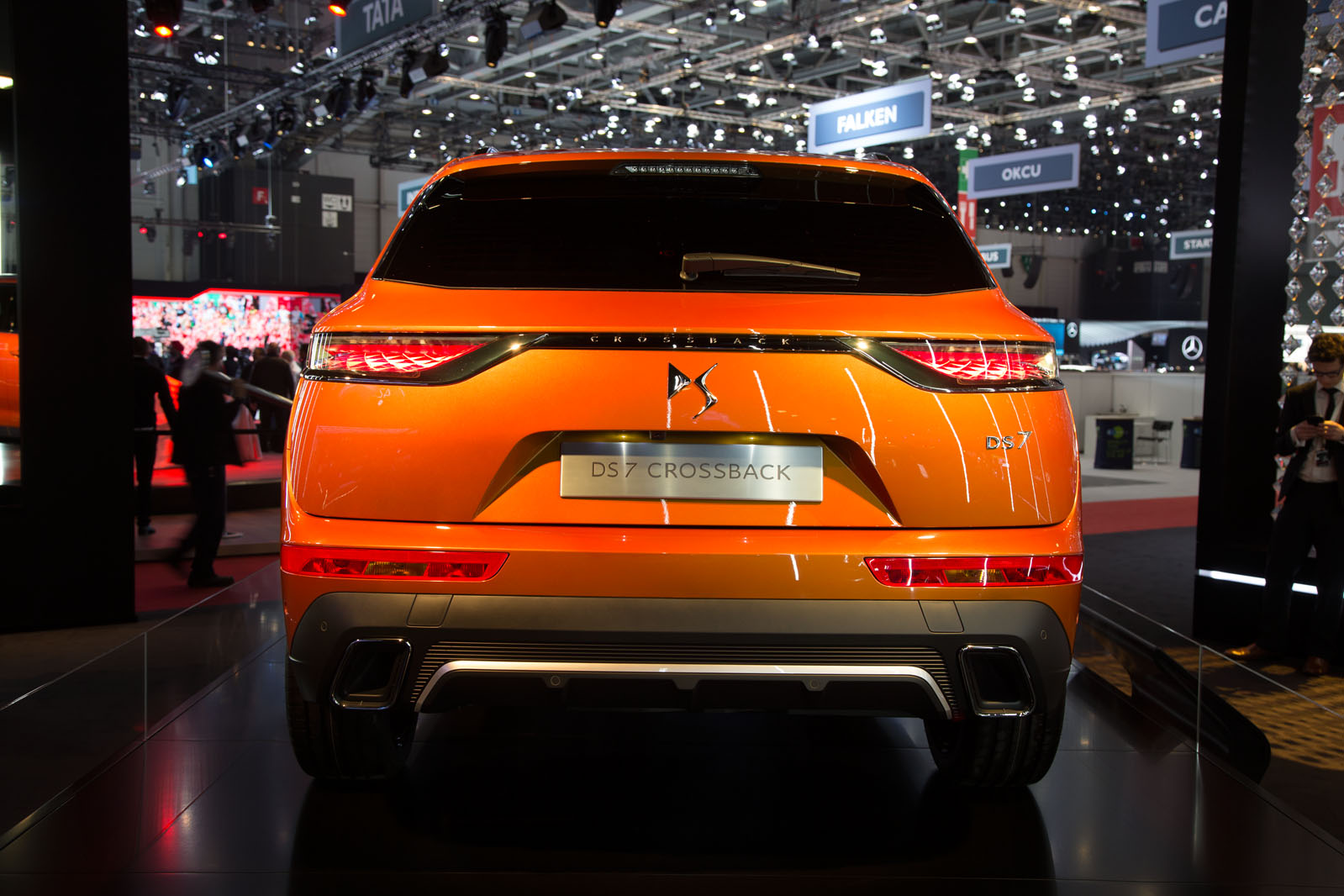 The car, which was developed under the codename X74, is built on the mid-sized version of PSA’s EMP2 modular platform. It's the first of what will quickly become a slew of new models from DS, among them a small SUV and a large saloon. However, there are no plans to bring the slightly smaller Chinese-market DS 6 crossover to Europe.

The 7 Crossback arrives less than two years after PSA split DS into a third brand positioned above Peugeot and Citroën. PSA is determined to portray its newest brand as a premium player and, as such, the 7 Crossback’s styling takes on plenty of upmarket cues; at the rear, it especially resembles the Q5 with a similar full-width tailgate with integral tail-lights.

We ride in the DS 7 Crossback

Test track demonstrations are normally conducted at a speed designed to make the passenger feel moderate awe, but not today.

Andrea Louis, the DS 7 Crossback project manager, is driving a hard-working prototype wearing a tatty disguise at a brisk but restrained pace. He deliberately takes aim at every imperfection he can find, including some nasty artificial ridges across the surface of the track. He’s intent on proving the 7 Crossback rides like a big French car should. 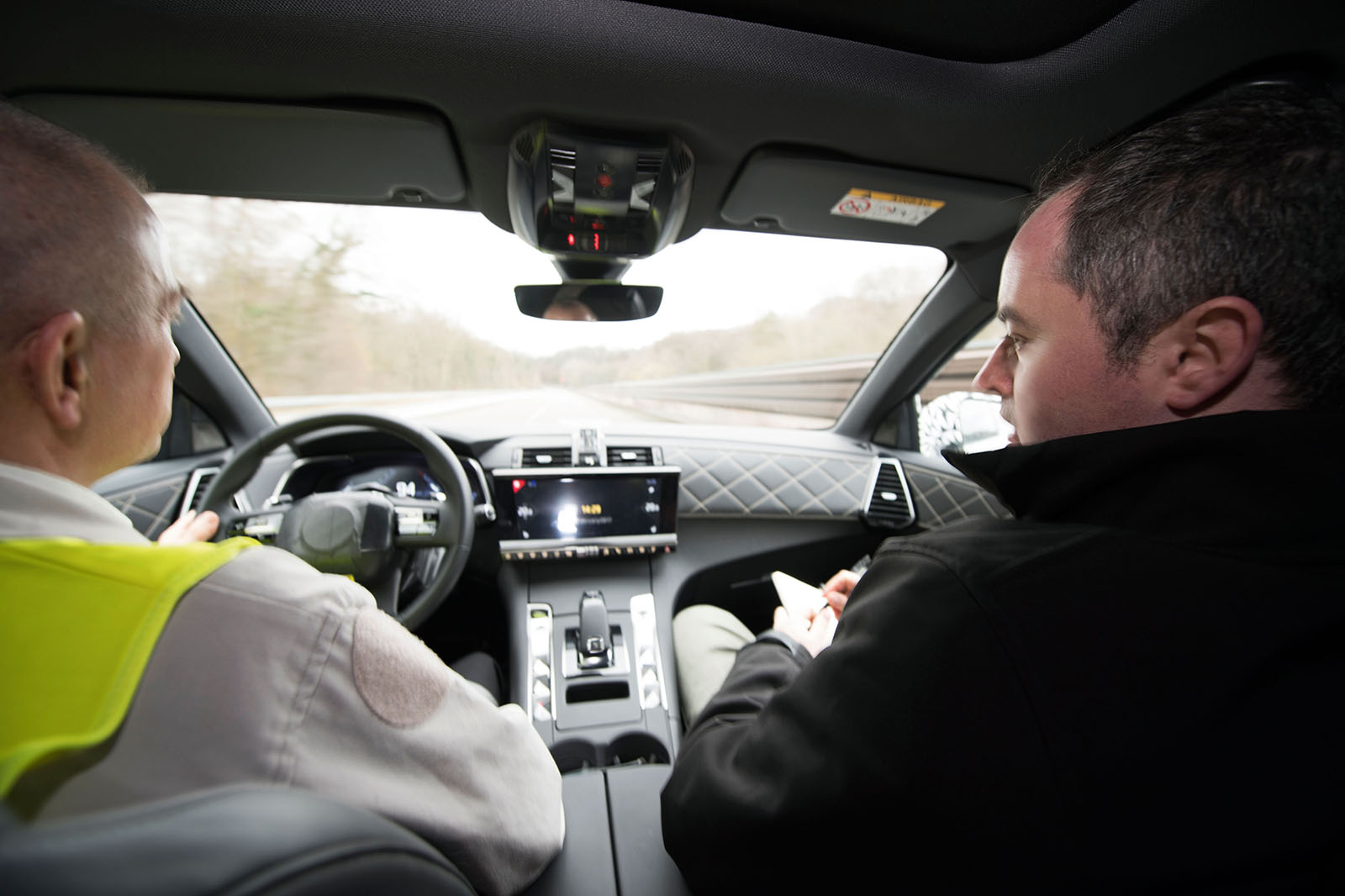 Unfortunately, our 7 Crossback isn’t fitted with the Active Scan suspension, which is apparently still undergoing final tuning, and the variable dampers are working only in their default Normal mode. Yet the car feels impressively compliant from both the front passenger and rear seats when asked to digest the Belchamp test track’s modest number of rougher surfaces, although they are still some way short of the challenge of a British B-road.

We’re told that PSA engineers are fully aware of what asphalt in the UK can be like – apparently, a group of them were moderately appalled after they were brought over to encounter our potholes – and DS is determined to reclaim the reputation for ride quality that French cars used to enjoy.

Opinion: the DS 7 Crossback should be the car that takes PSA back to America

Very optimistic to think many

Very optimistic to think many people in Europe will pay more than £30k for this, the brand just doesn't have the strength to compete with other £40-50k rivals

That first picture makes it look like a dodgy Chinese "Landwind" copy of an F-Pace complete with DFS interior!
AndyT 17 May 2017

It looks absolutely awful and

It looks absolutely awful and will do nothing to stem DS's massive sales declines in Europe and more worryingly in China. DS would have been better kept as a variant of Citroen then this unwanted marque of ugly models.
View all comments (19)