From £62,9007
Medium-sized fast Audi sticks with what we know, and may end up all the better off for doing so. Fast, super-composed, luxurious and supremely usable
Open gallery
Close

Audi might just have worked out that the smartest thing to do right now with some of its RS performance models is simply to sit tight. The Mercedes-AMG C-Class range is shortly to lose its character-defining V8 engines, after all; and have you seen the grille on the next-generation BMW 4 Series? Like it or not, I suspect you won’t be able to miss it on the M4 replacement.

One way or another, German performance car aficionados who haven’t owned or driven an RS5 before might feel quite inclined to do so these next couple of years. For those who do, taking on a known quantity might even make the Audi appeal all the more.

There are some styling and interior revisions to this car, bringing something that was looking and feeling a bit tired and old up to date fairly effectively; but there really is very little to report about the powertrain and running gear. The same Porsche-co-developed, 2.9-litre, 444bhp twin-turbo V6 does the grunt work as it did before, hooked up to the same eight-speed automatic gearbox and torque-vectoring quattro four-wheel drive transmission. And the same five-link steel coil suspension (adaptively damped as standard, with a diagonally interlinked ‘DRC’ set-up optional) serves for suspension. Variable-ratio dynamic steering (previously a little-taken option) has now apparently been removed from the UK order book completely.

The RS5 comes in a choice of three trim levels, and in coupé or sportback five-door hatchback bodystyles. Two-doors are 35kg lighter than sportbacks, and can be made slightly lighter still if you go for a roof panel made from carbonfibre-reinforced plastic. Meanwhile, both RS5 bodystyles continue to be priced identically. 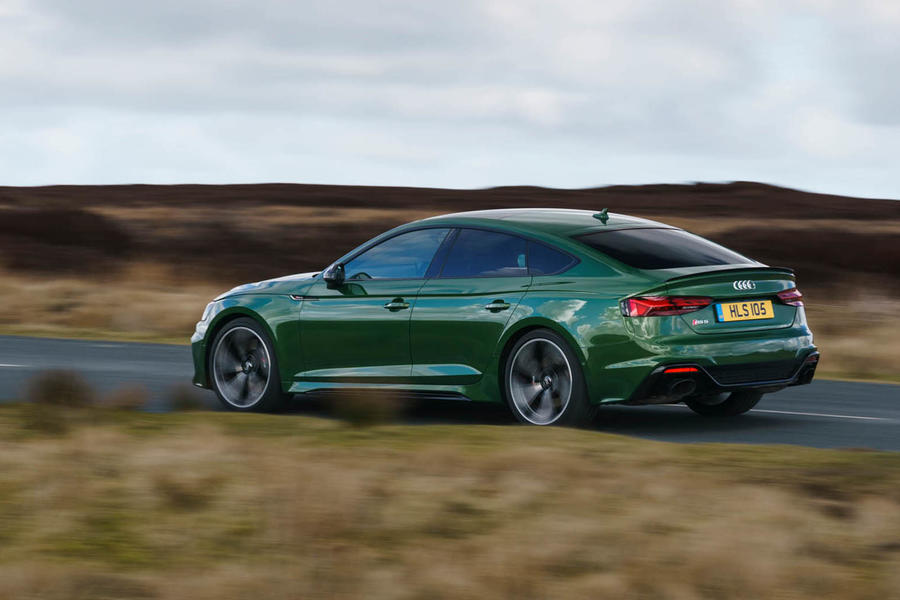 The sportback we tested had a slightly high-set driving position and was a little short on outright head room up front – but if you like your performance-car cabins super-smart, stylistically restrained and meticulously constructed, you’ll find little else not to your liking inside.

Audi’s latest MMI Touch infotainment system is higher-mounted than in other applications, and the deletion of the old rotary input device means you have to operate it via the screen, at arm’s length, or lump it. A good job the system’s pretty slick and easy to navigate, then.

Elsewhere you get Virtual Cockpit digital instruments as standard, which still set the standard for display clarity and configurability of layout. Most importantly, if you want to – let’s say you’ve got a long night drive ahead of you – Audi makes it easy to turn off the central display completely, and to switch the instrument screen into ‘minimal’ mode, in order to reduce that glare you can get from so many sources of artificial light. That can make a big difference to how quickly you tire on a long journey, and how easy it is to keep your eyes on the road – and other manufacturers would do well to follow Audi’s lead on it.

You can make up your own mind about the exterior styling changes. They’re pretty subtle – by far the easiest way to spot one of these new RS5s is likely to be via one of a pair of new paint colours, which are Turbo Blue and Tango Red. The radiator grille’s been made lower and wider, the precise shape and location of various frontal air intakes (both real and, yup, ‘implied’) have been tweaked, and there are new tail-lights and a diffuser panel at the rear. Quite why Audi bothers with so many styling references to the Ur-Quattro here, though – and yet doesn’t bother offering the iconic Nogaro Blue paint of the original RS2 – is somewhat puzzling (to me at least).

There’s a certain relative simplicity and predictability about the way the RS5 goes down the road, which is becoming rare among German performance metal. Unlike an RS6, for example, there is no active- or four-wheel steering here. There’s no height-adjustabile air suspension or active anti-roll bars either. That makes the RS5’s dynamic character a little bit more easy to process, and makes you more confident about what’s going to happen after you switch driving modes and turn in.

That said, it’s only relative simplicity; there are still three transmission modes to choose from, as well as three primary overarching drive modes and two new RS-branded, menu-configurable custom ones. Which all sounds like the opposite of simplicity, I’m sure – but in reality, you’ll probably experiment with individual system set-ups for a bit (for power steering weight, damper stiffness, gearbox and active rear differential calibration, and electronic stabilty control) until you find a combination you like, before ‘saving’ it as one of the ‘RS’ modes.

Do that and you’ll find that the RS5 can combine medium-heavy, moderately paced steering with first-rate handling precision, and good close body control with a firmish but reasonably supple ride. Outright agility isn’t this car’s thing, and neither’s bombastic combustive character or loutish rear-driven driftability. In an ordered list of the most engaging operators of its kind, the RS5 wouldn’t feature highly. But it does have great usability and luxurious habitability, as well as a buttoned-down, super-secure on-road character that makes it easy to drive – and to drive quickly, when the opportunity presents.

The word is that Audi tuned in a little additional exhaust noise to the V6’s audible repertoire for this facelifted car; and that may be so, but the RS5 still needs to be driven under lots of load to even begin to sound particularly interesting. The engine doesn’t have the accessible torque of the best of its rivals, with throttle response feeling a touch soft until you get 4000rpm wound into the crankshaft. At that point, however, the car takes off with a properly vigorous zeal through the lower ratios, and can close in on 7000rpm very rapidly indeed; albeit not that rabidly, funnily enough. 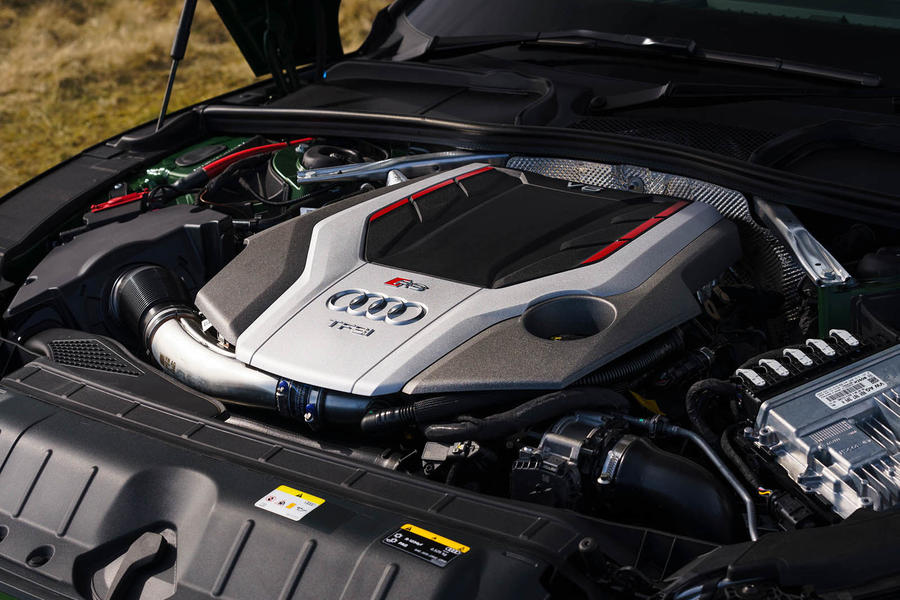 Right now, I’d be more inclined to snap up a V8-powered AMG C-Class or a genuinely pretty BMW M4 and preserve either for posterity, for the reasons we’ve already covered. But once they’re gone, they’ll be gone for good.

The RS5 certainly presents a very strong real-world ownership proposition. It won’t excite you like some; but it won’t surprise you with an armful of oversteer on a slippery weekday morning, or wear you down with a highly strung temperament either.

For those whose go-faster German exec is genuinely intended for everyday use, and not as a second or third car, that ought to stand for plenty. Whoever you are and whatever usage pattern you’ve got in mind for it, this car’s stock could well rise over the next 18 months simply as a result of questionable strategic decisions taken in places other than Neckarsulm, Germany. 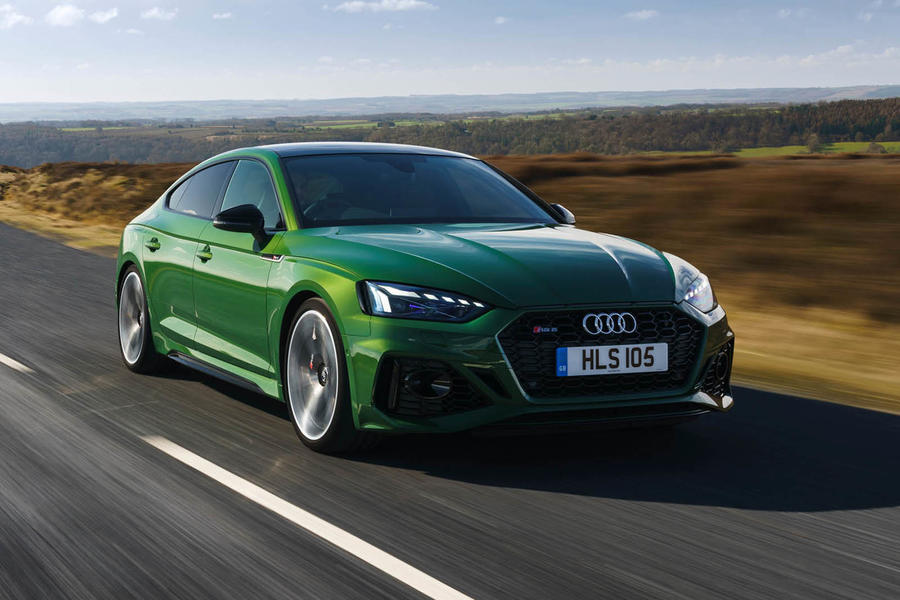 it would have to be the RS5 for me since unless it has been drastically improved I could not accept the ride of the M3 as a daily drive.   Neither could Iface that terrible instrument layout of the Merc - it is just not cohesive.

Nothing exciting with the RS cars. They are all fast and safe. Nothing more. You would think the top of the line sports car would have more personality. All the outputs are muted. Feel is muted as well. The new busy styling direction Audi has taken is not appealing either. The tacked on plastic inserts and too many hard styling lines ruin the once elegant look.
Just Saying 2 June 2020