There are few mid-life changes to the Audi RS4 Avant – and that’s a good thing. Few, if any, cars manage to combine such urgent response, secure handling, outstanding interior quality and overall versatility with quite the same degree of success as the latest incarnation of Ingolstadt’s performance estate.

Like its RS5 Coupé and Sportback siblings, the facelifted fourth-generation model receives some small exterior styling changes to help distinguish it from the car it replaces. However, none of them is what you would describe as being particularly significant.

At the front, there’s an altered front bumper with newly styled air ducts and an additional air inlet along the leading edge of the bonnet, above a reworked high-gloss black single-frame grille. The angular headlights also get new graphics in a move that gives the daytime running lights a more technical look than before: instead of the single bar of light, there are now six individual elements.

The changes to the rear are even more subtle, with new tail-light graphics similar to those used for the headlights and an altered bumper with a revised diffuser element.

It remains a purposeful-looking car with a fittingly muscular stance that’s arguably at its aesthetic best on the new optional 20in wheels and 275/30-profile tyres, as worn by our test car. They come in place of the standard 19in rims and 265/35-profile rubber.

Inside, the new Audi has the same excellent interior as before. It’s a great driving environment that is not only big on quality but also offers a level of everyday practicality matched by few rivals.

Despite the apparent similarities with the interior that has graced the RS4 since the introduction of the fourth-generation model in 2017, though, a few changes help to lift its appeal by making various functions more intuitive to operate.

Prime among these is a new high-definition touchscreen display for the infotainment functions. As with other recent new Audi models, it features the firm’s MMI touch response system in place of the rotary controller of the pre-facelifted model, as well as new gesture and speech control functions.

The clear draw card, though, remains the 495-litre boot, which can be extended to 1495 litres with the split rear seats folded away. Along with the car's five-door layout, it provides the RS4 Avant with a level of practicality missing in the mechanically identical RS5 Coupé and RS5 Sportback. 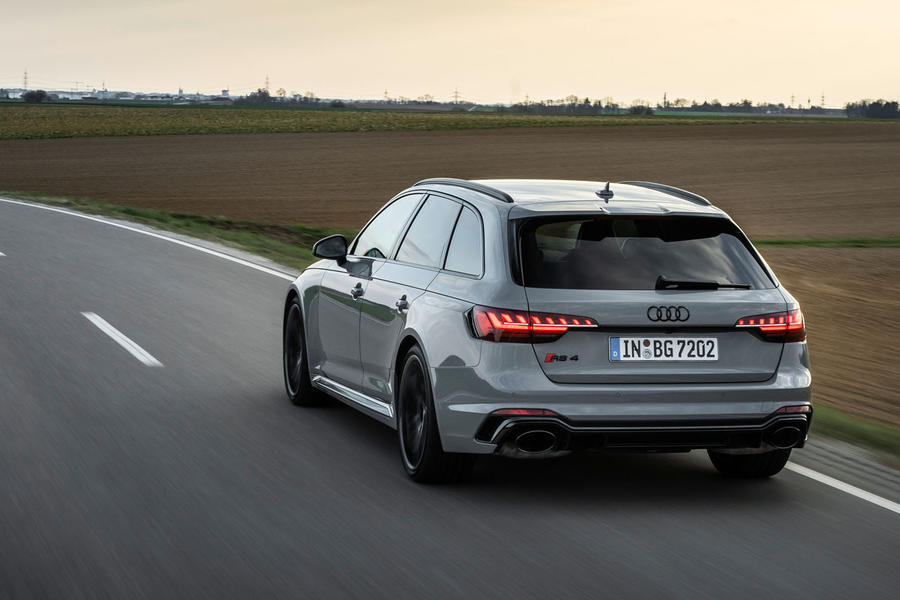 The facelifted RS4 Avant continues with the same-specification 2.9-litre V6 engine as before. With 444bhp, it matches the output of the third-generation RS4 Avant’s larger 4.2-litre V8, giving it 15bhp less than the Mercedes-Benz C63 Estate and 12bhp less than the Alpina B3 Touring.

But whereas the older, naturally aspirated V8 relied heavily on revs, the newer twin-turbocharged powerplant uses its 443lb ft of torque between 1900rpm and 5000rpm as the basis for its performance, which is never anything less than compelling, with great low-end potency and rabid mid-range urge in Dynamic driving mode, as evidenced by Audi’s 0-62mph claim of 4.1sec.

Detailed modifications to the exhaust system also give it a more alluring exhaust note than the pre-facelift version. It’s still not as captivating as the old RS4 Avant’s wonderfully sonorous V8 soundtrack, but there’s now greater volume to RS4’s 90deg V6 than previously.

There's an eight-speed torque-converter automatic gearbox with steering-wheel-mounted paddles and the latest incarnation of Audi’s quattro four-wheel drive system, with a sport differential to alter the amount of drive sent to each individual rear wheel. Both play a big part in moulding the RS4 Avant’s on-road character and providing it with stunning point-to-point qualities.

Indeed, there’s a tremendous ease of operation to the new Audi. You can tap into towering performance with great confidence and an immediate feeling of security.

The speed-sensitive electromechanical steering is well weighted and very responsive, if not quite the last word in feel and communication, providing the RS4 Avant with a decisive change of direction and arguably more engaging agility than at any time since it was introduced to the Audi line-up as a spiritual successor to the Porsche-produced RS2 in 1999.

Optioned with Dynamic Ride Control, which includes adaptive dampers, it also possesses impressive resistance to lean and outstanding body control. It’s the grip and traction, though, that really define the handling qualities and overall dynamics. Those 275/30-profile tyres provide huge purchase, while the torque-vectoring qualities of the RS4 Avant’s four-wheel drive system and rear differential endow it with wonderfully sure-footed ability even at high cornering speeds.

A further dimension worthy of note, is the new Audi’s outstanding longitudinal stability. With an optional Dynamic package that extends its top speed to 174mph, its ’bahn-storming billing is fully justified.

As you’d expect, it’s quite firmly sprung. But there’s sufficient compliance and shock absorption in Comfort mode to make sure it is never harsh on anything but the worst of pockmarked back roads. 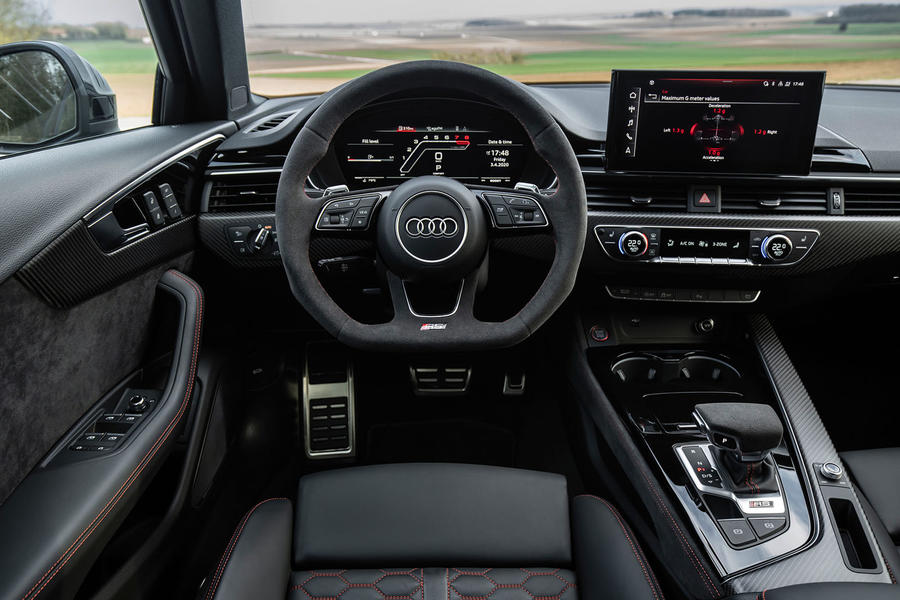 The new RS4 Avant is a wonderfully competent car that boasts all the accelerative potency of a proper supercar as well as truly effortless long-distance qualities - all in a package that will accommodate up to five adults and a good deal of luggage behind the second seat row if need be.

In this respect, it’s a rather rare machine. One that can be scintillating to drive in Dynamic mode one minute and extraordinarily tame in Comfort mode the next.

This exceptional breadth of operation is very much at the root of its appeal, making it a car for just about every occasion. If you like the idea of the two-door RS5 Coupé and five-door RS5 Sportback but require even more versatility or simply seek something a little more out of the ordinary, it’s the perfect alternative. And at £64,625, the multi-faceted estate is cheaper than either of its siblings, too. What more could you want? 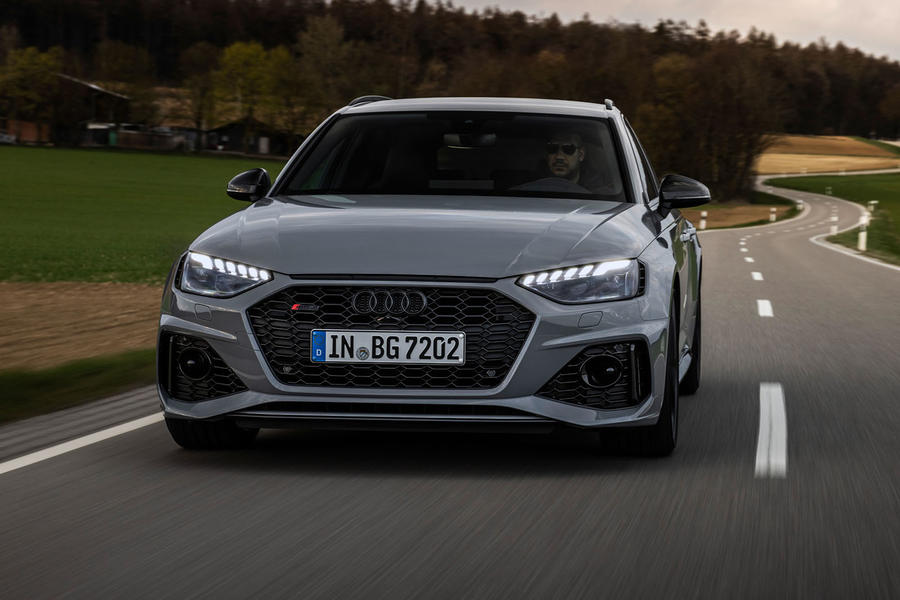 My friend is making 77 hourly at the laptop . He has been laid off from work 5 months ago, but last month he raked in  10258 by just working from home with program he found online. This is what he does... Try it out yourself

To integrate the touchscreen into their vehicles and it looks all the better for it.
OK, we're all getting a little bit more used to them now being up on the dash but the sharp corners on Audi's latest monitor make it stick out like a sore thumb, especially amongst the lovingly designed heater control panel (which is better for being buttons and knobs).
On the subject of heat, has the Audi flat-bottomed steering wheel managed to acquire a heating element yet, or is that beyond the realms...?
Deputy 5 May 2020

I was trying to spec an S4 or SQ5 recently.  Nope, not even an option.  Obviously Audi assuming most people driving a sporty Audi have just stolen it whilst wearing gloves so no need to have it heated!

No mention at all of fuel consumption or pollution emissions in the narrative. For most purchasers co car bik is irrelevant, but burning petrol at a vast rate should be. I wonder if / when the RS Audi's (not to mention M Bmw and real AMG mercs, as opposed to the stupid trim level) will become deeply uncool, a bit like smoking