From £26,2658
Entry-level petrol version of Audi’s refreshed A4 has the maturity, refinement and equipment-driven value to appeal loud and clear, albeit in very rational terms
Open gallery
Close

This is expected to be one of the biggest-selling engine and trim derivatives of what remains one of Audi’s most important models in the UK.

That, as such, the A4 35 TFSI Sport has a petrol engine still surprises this tester, but it probably shouldn’t, given the way so many customers are continuing to avoid buying a diesel wherever they possibly can. Although lower-emissions, more frugal diesel derivatives are coming soon, the cheapest and most efficient version available at launch (the 40 TDI quattro Sport) is nearly £6000 more expensive than this, would cost you 5% more in company car tax and isn’t rated as a great deal more fuel efficient even in the emissions lab.

That helps explain why Audi is forecasting that this 148bhp petrol A4 will lead the UK sales mix, albeit in more dynamic and slightly more equipment-laden S line trim than our Sport-spec test car. It’ll be on offer with either a six-speed manual gearbox or Audi’s seven-speed S tronic dual-clutch automatic and exclusively with front-wheel drive, the manual being the marginally quicker of the two in terms of 0-62mph performance and the auto the marginally more frugal and carbon-efficient, the latter depending a bit on equipment level and associated wheel size.

In any other 148bhp petrol model in the sprawling VW Group (and indeed in other 35 TFSI Audis) you’d get a turbocharged 1.5-litre engine, but this A4 uses a detuned 2.0-litre turbo instead, most likely for the greater and more broadly spread torque it yields: 199lb ft of it in all, available from less than 1350rpm. The engine also uses 12-volt mild hybrid assistance, although, unlike a 48-volt system, that only really amounts to an intelligent alternator and automatic engine start-stop. 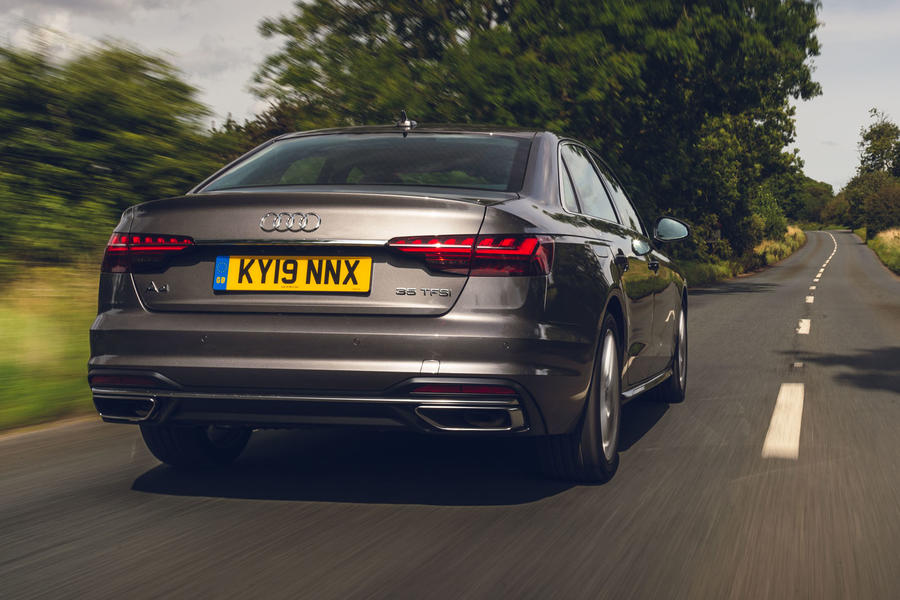 As we’ve reported already, Audi’s mid-life facelift for the A4 is mostly about revised exterior styling and beefed-up equipment level, but it has also brought the car in line with Audi’s new-wave engine nomenclature regime and allowed turbo petrol to be swapped for diesel at the very top of the A4 pile with the new S4 TDI.

The car’s model trim hierarchy has been tweaked too: it now starts with an entry-level version called Technik and ends with fully loaded Vorsprung – although in an interestingly generous move, Audi is providing an enlarged, 10.1in infotainment screen, a 12.1in Virtual Cockpit digital instrument cluster, heated front seats, LED headlights and three-zone climate control as standard kit even on bottom-rung models. We can probably thank the competitive influence of a new and rather good BMW 3 Series for that.

The A4’s cabin remains, for the most part, exactly what it was, then: a very smart, materially quite rich, solid-feeling capsule of stylistically restrained discipline and high-tech ambient cool. Most of the fittings on which your gaze comes to rest look appealing and feel likewise, with the exception of that new free-standing infotainment screen, which is just a tiny bit yielding and wobbly if you anchor your outstretched arm on its upper edge while jabbing away with your thumb at the screen. The cabin is very competitive for spaciousness and visibility is good, thanks not least to a driving position that isn’t quite as low as you’ll find in some compact saloons, while the car’s standard sport seats are comfortable enough.

On the move, the 2.0-litre turbo petrol engine provides good refinement and decent outright performance and driveability for the car – although the last item doesn’t come entirely without qualification. The car picks up speed with enough urgency to satisfy most tastes and is nicely responsive to bigger throttle inputs, the seven-speed gearbox feeling smooth and slick both under hard acceleration and when simply cruising.

The transmission is a little bit slow to kick down, though, and can feel reluctant on the uptake when you’re just tipping into the pedal after a tight bend or when pulling away from a standstill. Using the car’s paddle-shift manual mode, you can, as ever, take direct control of gear selection and shift timing and smooth out a few of those unwanted operating quirks, but you won’t feel like doing that on every trip – and you shouldn’t be obliged to.

The engine would feel smooth and quiet to a driver who’d given up any comparable four-cylinder diesel saloon, but also plenty of direct petrol rivals you might mention. On our short test route, under a mix of quicker driving and A-road cruising, it returned better than 40mpg.

Handling is secure, linear and entirely competent, with medium-paced and weighted steering and useful on-centre stability and feel. The A4 doesn’t feel especially agile or athletic, but it’s obedient and easy to drive – while wider test experience suggests the lowered sport suspension fitted to S line and Black Edition cars adds very little in the way of driver engagement and has a regrettably unsettling effect on ride quality.

The good news is, on standard passive suspension and moderate-sized alloy wheels, the A4 rides fairly quietly and with good comfort and isolation at both low speeds and high. Go all the way to Vorsprung trim and you can add adaptive damper control too, if you want to. 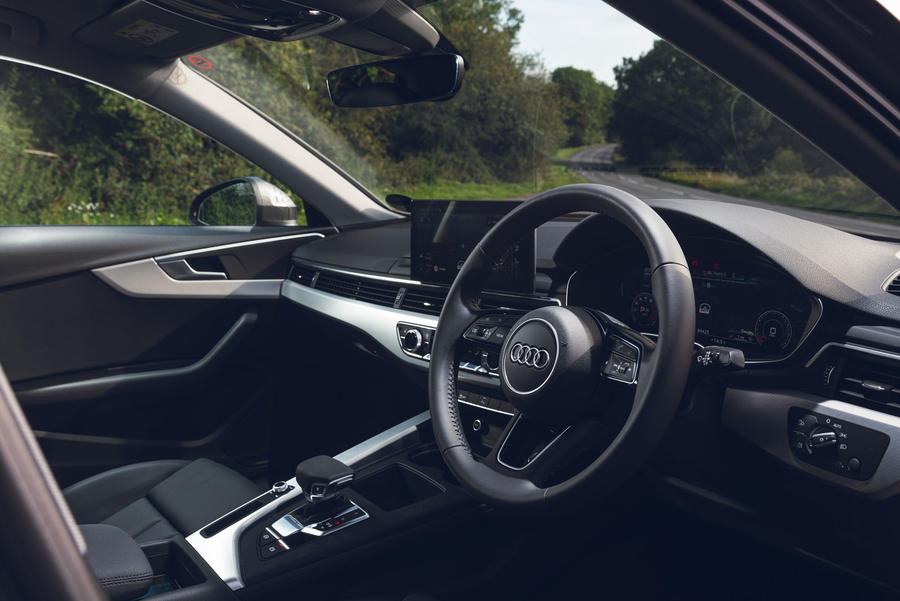 Plenty of people certainly will buy an A4 – and considering the intensive, high-mileage everyday use that a lot of those customers are looking to cater for, the A4 35 TFSI will be a wise buy.

Well mannered, well equipped, practical, easy to use and brisk enough when needed, this car ticks the sort of boxes that many might wish weren’t so tediously important but also aren’t daft enough to deny.

To these eyes, it’s little more memorable or appealing to behold than it was before the facelift; nor is it any more exciting to drive. But when the A4’s all-round package is so complete and convincing otherwise, that perennial failure to inspire much real enjoyment out on the road shouldn’t be much of a barrier to continued success. 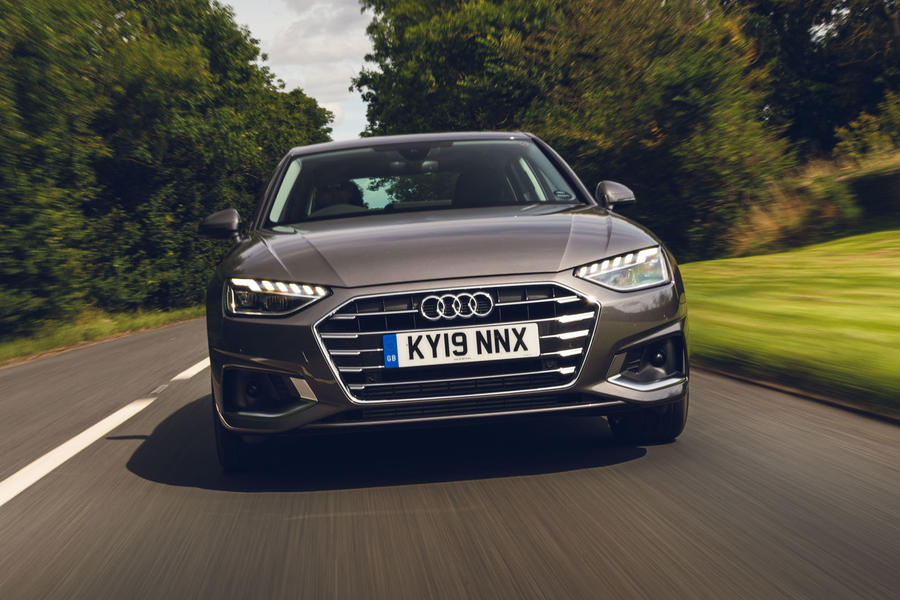 Come on Audi, you aren’t fooling anyone. (Or maybe they are, that is why they do it!)

You've only got look at what

You've only got look at what is on offer here to understand why an XE will never be competitive in this class.
si73 21 August 2019

Whilst I am not an Audi fan I

Whilst I am not an Audi fan I must admit I like their older stuff, this looks bland and doesn't convey the image to me that an old 80 or 90 from the 80s did, that it looked so solid and hewn from stone. Audi seem to have lost that solid simple and elegant style they once had in abundance.
abkq 22 August 2019

Whilst I am not an Audi fan I must admit I like their older stuff, this looks bland and doesn't convey the image to me that an old 80 or 90 from the 80s did, that it looked so solid and hewn from stone. Audi seem to have lost that solid simple and elegant style they once had in abundance.

Agreed, I put Audi's styling decline after the original TT & the A2. After TT & A2 its not about purity of design anymore. Every generation adds more and more irrelevant details.