BACK TO ALL NEWS
Currently reading: Volkswagen T-Roc Cabriolet to launch next year
UP NEXT
How Max Chilton and the McMurtry Speirling conquered Goodwood

Volkswagen's chief operating officer has confirmed that the Volkswagen T-Roc convertible will be revealed next year ahead of going on sale in early 2020 - and says it will be the "emotional highlight" of the firm's SUV range in Europe.

The two-door model, which has previously been spied testing, is set to be the only convertible in Volkswagen's range: the Golf Cabriolet was axed in 2016 and the Beetle Convertible has also been dropped. Volkswagen has said the car will go into production in time for early 2020, and COO Ralf Brandstätter said at the launch of the new T-Cross small SUV that it would be revealed early in 2019.

The T-Cross completes Volkswagen's mainstream European SUV line-up – alongside the T-Roc, Tiguan, Tiguan Allspace and Touareg – ahead of the introduction of both Convertible and R variants of the T-Roc. Brandstätter said that the firm's SUV strategy was built on a series of global models, such as the T-Roc and Touareg, that were adapted for each market, alongside a number of individual vehicles for those markets.

The T-Roc Cabriolet is likely to be aimed largely at the European market due to the relative popularity of soft-tops here, with Brandstätter adding that "it will be our emotional highlight for Europe".

The car will be one of the only convertible SUVs on the market when it goes on sale, but Andreas Krüger, Volkswagen's head of product line (small), said that the success of the standard T-Roc meant it made sense. "If you have a strong model you can base a derivative on, such as the T-Roc, you can already justify a second model because the first model sells in six-digit numbers," he said. "It was the same with the Golf Cabriolet. It is a project that’s worth doing."

The recently spotted prototype sported a surprisingly modest design, given that the car is more than a year away from production, showing its thin window line with a fabric folding roof in place up to the rear.

The T-Roc Cabriolet is to be built at the Osnabrück plant - formerly the home of coachbuilder Karmann, which produced the Golf Cabriolet and original Volkswagen drop-top Beetle. Currently, the facility oversees part-production of Porsche's Porsche Cayenne and 718 Cayman, the Skoda Fabia and the Volkswagen Tiguan, which is finished in Wolfsburg. 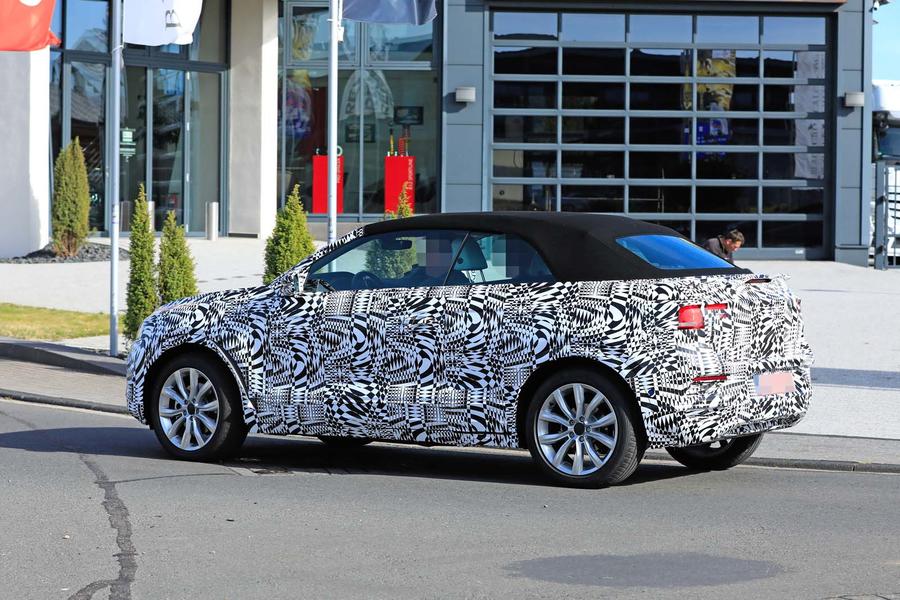 At its peak, around 20,000 T-Roc Cabriolets will be made per year, representing an investment of around £70 million in Osnabrück targeting logistics and modernising of production and assembly technology.

More than 40,000 orders for the regular T-Roc have been placed since its launch late last year, although convertibles tend to be slower-selling for Volkswagen; just 613 Beetle Cabriolets were sold in the UK in 2017.

However, SUVs are increasingly important for the brand. It plans to launch 20 before 2020, and the firm estimates the high-riding machines will account for half of its sales by 2025.

The T-Roc Cabriolet is part of a new, more 'emotional' strategy as the brand introduces cars that steer away from its traditionally rational approach. The dramatically styled Volkswagen Arteon was the first example.

The concept designs for the machine were so good that a production run was approved by Volkswagen's board even though it didn’t make “rational sense”, according to company sales boss Jürgen Stackmann. He said: “It’s a car we all wanted to make. There isn’t a huge market for it. That sort of car is only popular in a small number of countries. But we felt passionately we should do it.”

Volkswagen boss Herbert Diess added: "Volkswagen is evolving into an SUV brand. The T-Roc is already setting new standards in the compact SUV segment. With the cabriolet based on the T-Roc, we will be adding a highly emotional model to the range.”

A T-Roc R model is also in development, although Volkswagen remains tight-lipped about it.

Volkswagen T-Cross due on sale in 2018 with Polo engines

Body texture of the car is not so bad. it's a different from others.

I wish VW were as keen to

I wish VW were as keen to produce small 3-door hatchbacks, are they are to have this convertible SUV. Once the Up goes, they won't have any, and despite what the manufacturers and motoring journalists say, I'm sure there's still a good market for them.

I wish VW were as keen to produce small 3-door hatchbacks, are they are to have this convertible SUV. Once the Up goes, they won't have any, and despite what the manufacturers and motoring journalists say, I'm sure there's still a good market for them.

Those cars which you would like them to produce, give little profit margin and take up manufacturing space that can be used to make the SUV models that people want and go on to spec up...more sales, higher profits, looking after their customers vehicle expectations and their shareholders dividends expectations, while preserving/increasing jobs...you see how it works now?.

Evoque 'the skip' convertible never appealed in the least, and neither does this, but if there really is a market for these things I guess you can't blame the manufacturers trying to make a few more quid.

But judging by the number of the Evoque convertibles I've seen (2 in the whole of this past year), it can't be that big a market, at least not in the South East.