BACK TO ALL NEWS
Currently reading: 2018 Volkswagen Touareg confirmed for late March debut
UP NEXT
Exclusive: Aston Martin seeks funds to safeguard its future

Latest version of Volkswagen's large SUV targets the BMW X5 and Volvo XC90; it gets a more luxurious interior and an Arteon-inspired design
Open gallery
Close

The 2017 Volkswagen Touareg has been confirmed for a late March reveal, with a revealing sketch showing the look of the car.

Although the sketch reveals much of the car's look, its full styling, front and rear was shown in the most recent spy shots, which show the car in two different specs, with two different colour choices. The SUV appears to have grown in length from the current car, with a sloping roofline and clear inspiration drawn from the Arteon, horizontal chrome detailing across the front tying the two designs together.

Full styling and details will be officially released on 23 March at an event in Beijing, but Volkswagen has revealed that the car will benefit from rear-wheel steering and air suspension as the brand aims to sharpen its handling over the previous model, as well as being available with a new digital instrument cluster, which Volkswagen has named Innovision.

A previously spotted model was largely covered, although it did have a light disguise over some of its details. It shows that the next-generation SUV will get a design influenced by its smaller sibling, the Volkswagen Tiguan, as well as the larger, US-focused Atlas.

The Touareg's headlights are sharper and more angular than before, while the tail-lights, which were previously hidden by fake light covers but were fully visible for the promotional shoot, are also far slimmer than before. 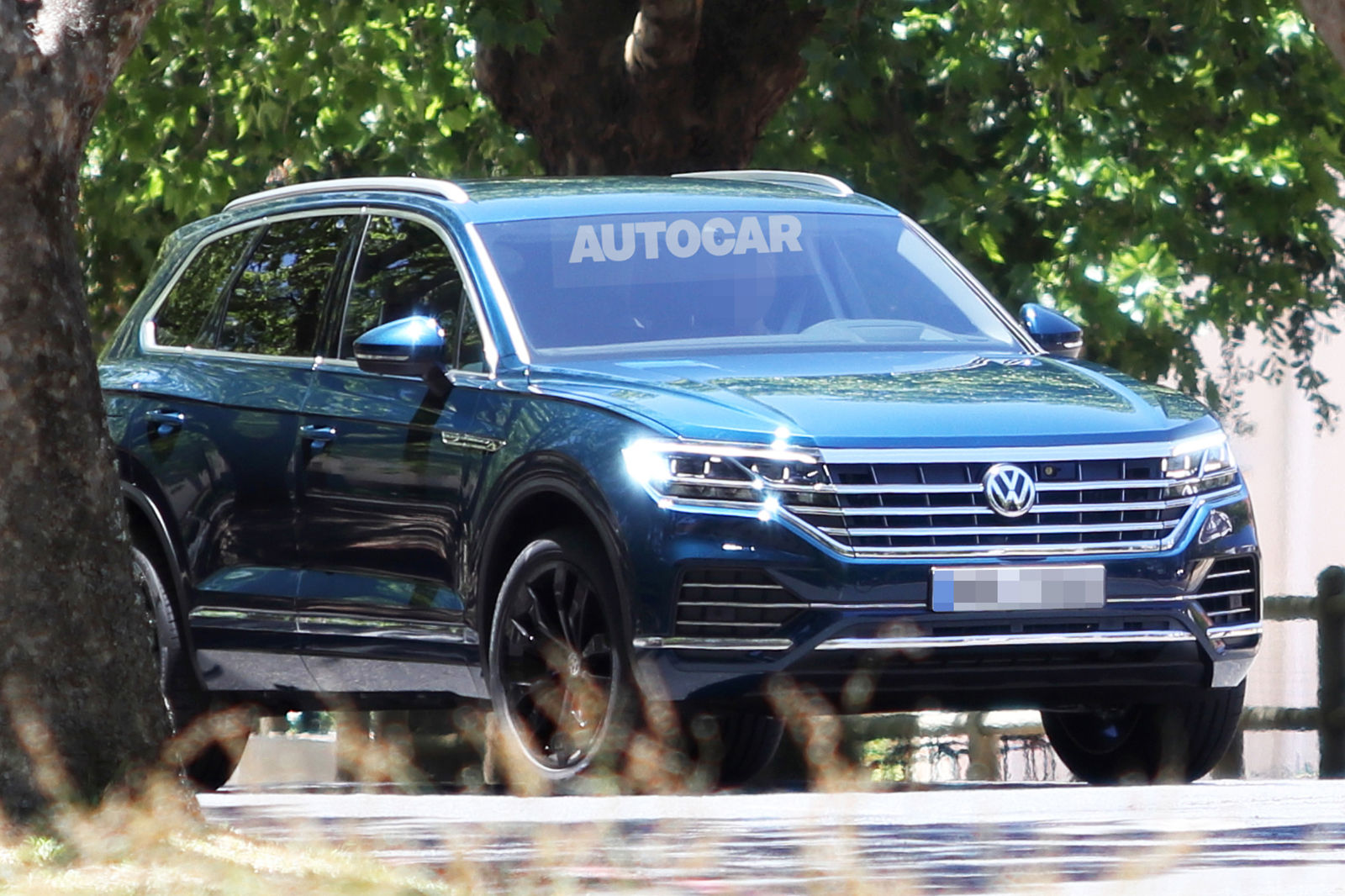 Earlier sightings also suggest that the next Touareg's interior will also be more premium than before, with higher-quality materials and a larger infotainment screen. This is intended to help it remain strong in the battle with the upcoming BMW X5 and the Volvo XC90. The car's look marks the push upmarket of Volkswagen's larger cars, the Arteon in particular.

Powertrains for the Touareg will include a plug-in hybrid drivetrain, which will likely be related to the one that was used in last year's Beijing motor show concept. That produced 381bhp and 516lb ft of torque, and could drive in full-electric mode for up to 50 miles. In its most economical mode, the concept was also said to be capable of more than 94mpg combined. 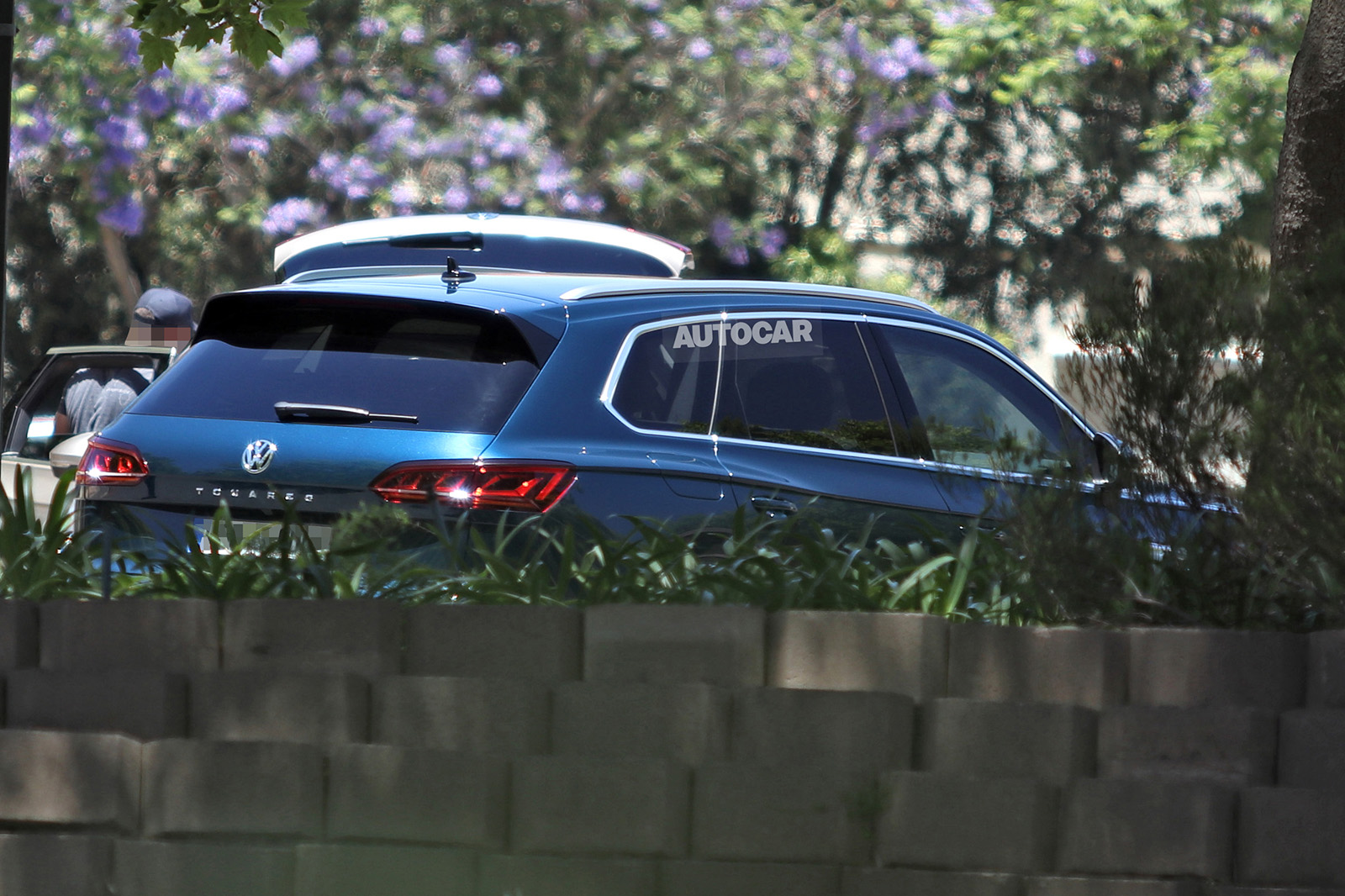 Below the hybrid drivetrain, more conventional turbocharged four-cylinder diesel and petrol units are likely to form the bulk of the Touareg's engine line-up. Volkswagen remains tight-lipped on engine options ahead of the car's official unveiling, though.

As is the case with the current car, all models will come with four-wheel drive as standard.

Being one of Volkswagen's oldest models didn't do the Touareg's 2017 sales any favours - VW shifted just 3689 across the year, compared with 29,121 Tiguans. This is just 474 more than the Volkswagen Sharan, despite large SUVs all but devouring the MPV market.

Pricing is likely to stay close to that of the current car, so expect an entry-level figure of around £45,000. First customer deliveries are scheduled for April.

I found free askLocation cell phone offline locator app which can track location of your hidden cell phone in the car even if car is in underground garage. GPS track device can be found easily but this app uses GSM service for location data, very good...and not battery draining...
WallMeerkat 9 February 2018

Still don't get the appeal of

Still don't get the appeal of these things, they're just vulgar and needlessly big whilst being space inefficient on the inside.

Aestethically they look like a cross between a van and a people carrier.

Very (too) close to the look of the Q7

Change the front fascia and this could be a Q7.  VW Group seems to have lost the ability to differentiate its marques and so has truly become a 21st Century BLMC.