Volkswagen has released a sketch of the new T-Roc R performance SUV ahead of an expected unveiling at next month's Geneva motor show.

The images shows that, as expected, the model will feature pumped-up styling compared with the standard Volkswagen T-Roc, including enlarged front air intakes with a honeycomb grille and bigger wheels.

A previous teaser video, released by VW, shows the T-Roc undergoing development testing in disguise at the Nurburgring.

The video was the first confirmation of the T-Roc R's existence, which the company had previously been keeping a relative secret. It shows rally driver Petter Solberg figuring a camouflaged prototype on the Nordschleife but reveals little else about the car.

Autocar understands the T-Roc R will use the same 296bhp 2.0-litre turbocharged engine as the Golf R hot hatch, with which it shares its platform.

Earlier spy photos had shown a different prototype to the one spotted originally, with a different body colour and the same distinctive hoop daytime running lights of higher-spec cars. A production T-Roc R will undoubtedly follow this distinction.

A performance version won't be the only new T-Roc model; Volkswagen has also announced the launch of a T-Roc Cabriolet for 2020. The T-Roc R's more advanced stage of development means it will arrive before then, though.

Volkswagen sources hinted at the hot SUV being developed to become the most agile offering in its class, with chassis development guru Karsten Schebsdat and professional racing racer Benny Leuchter on hand to ensure its competitiveness.

Speaking at the launch of the new Volkswagen Polo GTI, Schebsdat, who led the development of models such as the Volkswagen Golf GTI Clubsport S and previously headed up chassis development at Porsche, said the T-Roc is already well suited to a performance application and therefore would be an effective R model.

"I think the standard T-Roc with 4Motion [four-wheel drive] and the DCC chassis with 19in wheels is the most agile SUV in that class," he said. "If there will be a T-Roc R, it will definitely be even more fun."

The model, a rival to group stablemate the Cupra Ateca, will put out 296bhp and had been spotted testing at the Nürburgring long before Volkswagen confirmed its existence.

Leuchter has been drafted in to provide input for the car's set-up. He was a key contributor to the Clubsport S's final technical settings and was the man at the wheel when it set an earlier Nürburgring front-wheel-drive lap record. 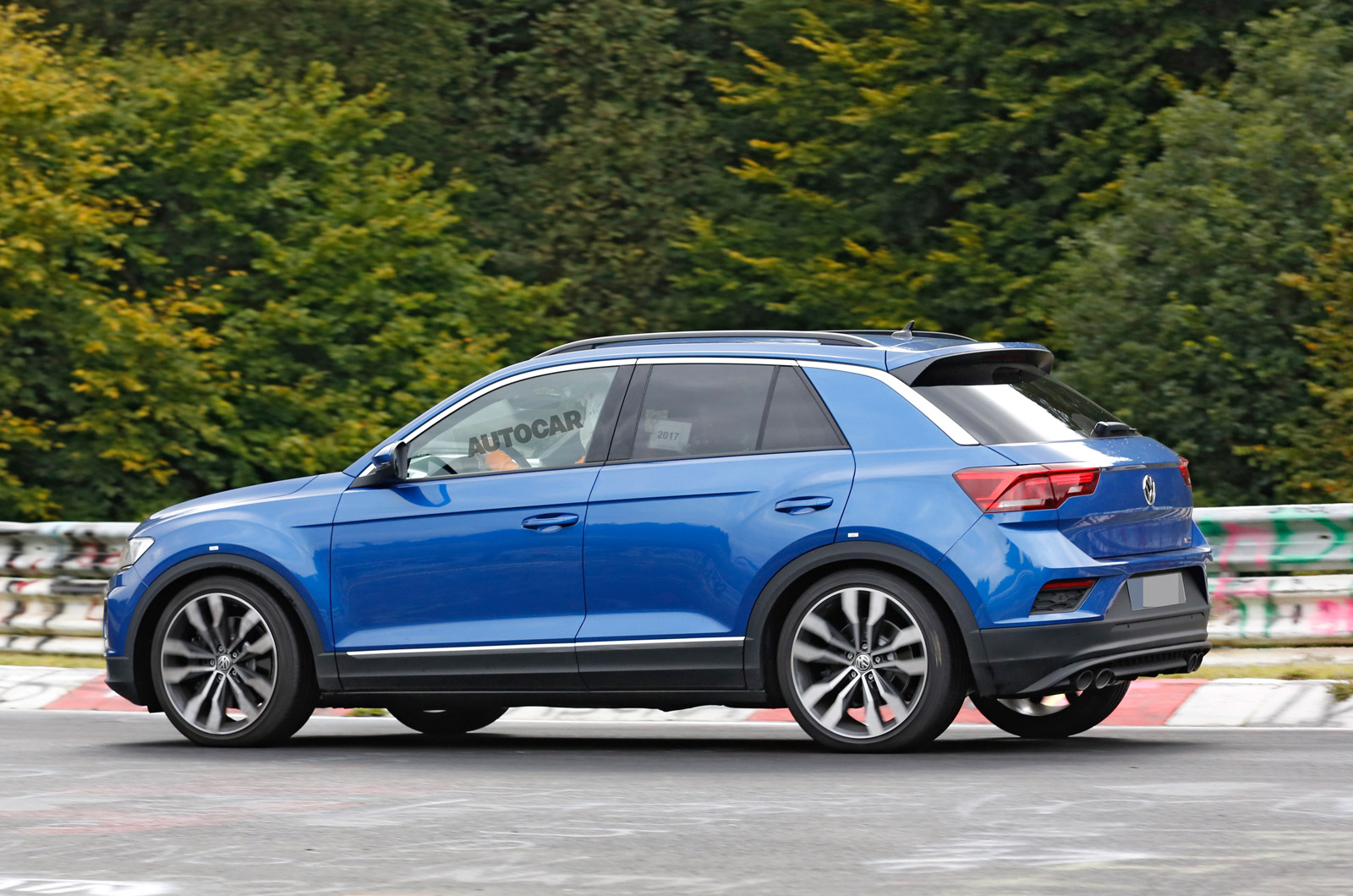 Leuchter said he has been pushing for more agile set-ups on Volkswagen models that reduce the understeer previous models had become synonymous with, suggesting that the T-Roc will be given playful characteristics in order to appeal to driving enthusiasts. Leuchter's input on the Polo GTI, for example, has increased its adjustability.

The T-Roc will be powered by the same turbocharged 2.0-litre four-cylinder engine as the Golf R, and the two will share much more, because each uses MQB A underpinnings. However, with the same power outputs, the T-Roc R's additional weight and higher centre of gravity will ensure it falls short of matching the 4.6sec 0-62mph time and dynamic handling of its smaller sibling. 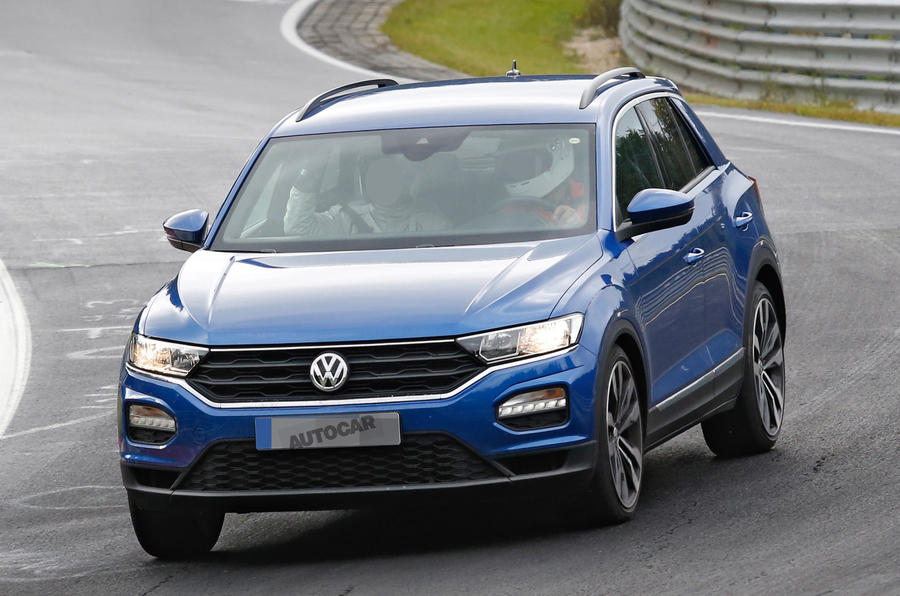 In typical Volkswagen R style, the future performance T-Roc's styling will likely remain restrained to give it an understated look.

Early 'in the metal' sightings came weeks after Volkswagen research and development boss Frank Welsch told Autocar that he had commissioned the building of a development car to test the T-Roc R formula. Welsch said he "liked the idea" and expected it to "go well in the UK".

Volkswagen chairman Herbert Diess revealed last year that the fastest T-Roc would bypass the GTI name because "GTI is for us the hot hatch; a sporty car, classless and accessible for many. It should be this car - a hot hatch". For an SUV, Diess said "we have another sub-brand, R".

The T-Roc R would sit above the current most potent 187bhp T-Roc, which Welsch believes will help the model stand out in its busy segment.

“We have a 187bhp T-Roc, which is more than the competitors offer," he said, "and we’ll see if lots of people take that." 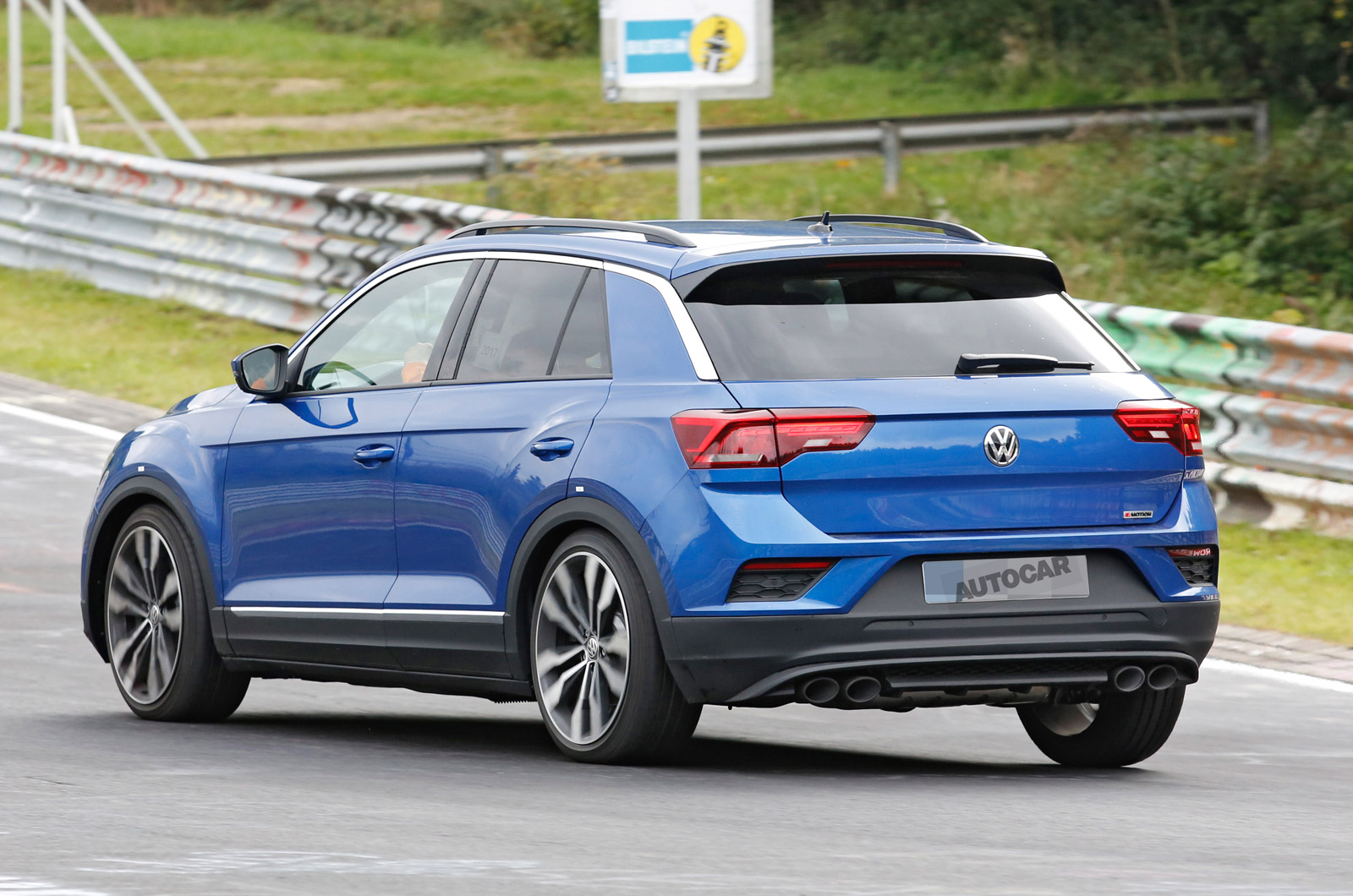 The commonality of parts for cars using the MQB A platform on which the T-Roc sits also raises the prospect of the new SUV being sold in plug-in hybrid GTE form along with, potentially, a warm GTD set-up.

However, the future of diesel engines in smaller cars remains up for debate as manufacturers weigh up the cost of meeting new emissions regulations for diesels against how much of a premium buyers will be willing to pay. A pure-electric version of the T-Roc is unlikely, however, as VW is set to launch a bespoke family of electric models on its MEB platform from 2020.

Welsch’s openness to branding a fast T-Roc as an R model rather than a GTI also signals a clear policy to reserve the latter badge for its famous hot hatches. Even so, the firm has broadened the appeal of its GTI range, with the expansion of the brand into the entry-level Up GTI.

As the SUV sector booms, car makers are looking to exploit sales niches while creating halo models that attract attention to a line-up. For example, Nissan launched Nismo models of its Juke, but VW’s decision to launch an R version of the T-Roc would signify a step up in the mainstream performance SUV stakes.

Comment: will a hot Volkswagen T-Roc be a sales success?

It's still incredibly dull and boring...the article and the car.

Only goes to prove...

You can have an opinion,you don’t have to agree or disagree, if you like it that’s fine, putting up some older comment might give others a chance to revaluate there opinion, i personally am not a fan of SUV’s in all areas of motoring, there meant for rough terrain or are an advantage when the Weather is bad and the Roads are bad, they shouldn’t be capable of 150+mph or 0 to 60mph in under 4 seconds,ok, have themwith plush interior, but car makers please stop saying this is what we should be driving!, just my opinion, thank you....

great car. Why shouldnt suv's be fast? It is just a more practical golf.

You can have an opinion,you don’t have to agree or disagree, if you like it that’s fine, putting up some older comment might give others a chance to revaluate there opinion, i personally am not a fan of SUV’s in all areas of motoring, there meant for rough terrain or are an advantage when the Weather is bad and the Roads are bad, they shouldn’t be capable of 150+mph or 0 to 60mph in under 4 seconds,ok, have themwith plush interior, but car makers please stop saying this is what we should be driving!, just my opinion, thank you....

If people continue to buy them in their droves (which they are), then it's hardly the manufacturers who are saying we should be driving them. Your tastes are not the tastes of tens of thousands of motoring consumers. It's "supply and demand", not "supply and you must buy!"

It's your opinion that SUVs shouldn't be fast... and you are obviously allowed to have that opinion... but as stated, thousands disagree and are willing to pay for such a vehicle. They'll stop being built when no one wants to buy them... I'm sure you understand how business enterprise works.

I’m embarrassed to say I

I’m embarrassed to say I quite like it. A slightly more practical golf r and not as ugly as the golf r estate.