Volkswagen has given its clearest look yet at the upcoming T-Cross compact SUV, with a new video featuring close-up shots of the finished car's styling.

Jürgen Stackmann, the firm's marketing chief, posted a short video on his official Twitter account that showed elements of the crossover's exterior and interior styling. The T-Cross will be revealed in full on Thursday (25 October).

The video contains a shot showing a close-up of the front grille of a T-Cross, with the rear of another example in the background. It showcases that the car, similar in size to the Polo supermini, will feature the traditional rugged SUV styling. Another shot shows the T-Cross name spelt out on the rear boot, and features a close-up of an orange-coloured wheel rim, likely to be an option for buyers.

There are also views of the interior of the new car, showing VW's well-regarged digital instrument and infotainment display.

VW has previously shown off a close-up of the supermini-SUV's headlights and daytime running lights on Twitter, while also hinting at what paint options to expect when it goes on sale early next year.

The T-Cross, which Autocar has already driven in prototype form, will become the fourth SUV in VW's European line-up, beneath the T-Roc, Tiguan and Touareg.

Previous design sketches have hinted at a design that draws heavily from the larger T-Roc but with a distinctive rear end and on-trend light bar tail-lights. A recent preview showed designers working on the car, with brightly coloured trim being selected for the interior. Twelve interior colours will be available at launch, while a two-tone paint job will be available for the exterior.

The T-Cross focuses on practicality, according to another preview revealed by VW, with 385-455 litres of boot space with the rear seats in place, depending on their position, rising to 1281 litres with the rear seats folded. With the seats in place, this space is 33-103 litres larger than the Kia Stonic, and up to 55 litres larger than the Seat Arona, although with the T-Cross's seats positioned for maximum leg room, 15 litres down on its Seat cousin.

The T-Cross is expected to cost around £17,000 when it goes on sale, rivalling the Seat Arona, Renault Captur and second-generation Nissan Juke. Latest spy shots show the car in its most undisguised form yet, although some cladding on the front and rear disguises the car as a T-Roc, covering its actual features.

The T-Cross is the latest in a 19-strong line-up of SUVs that VW plans to have in place within the next two years. VW’s aim is to boost sales of high-riding models to 40% of its overall global total by the end of the decade.

It uses VW’s MQB A0 platform, shared with the VW Polo, Arona and Audi A1, among others. 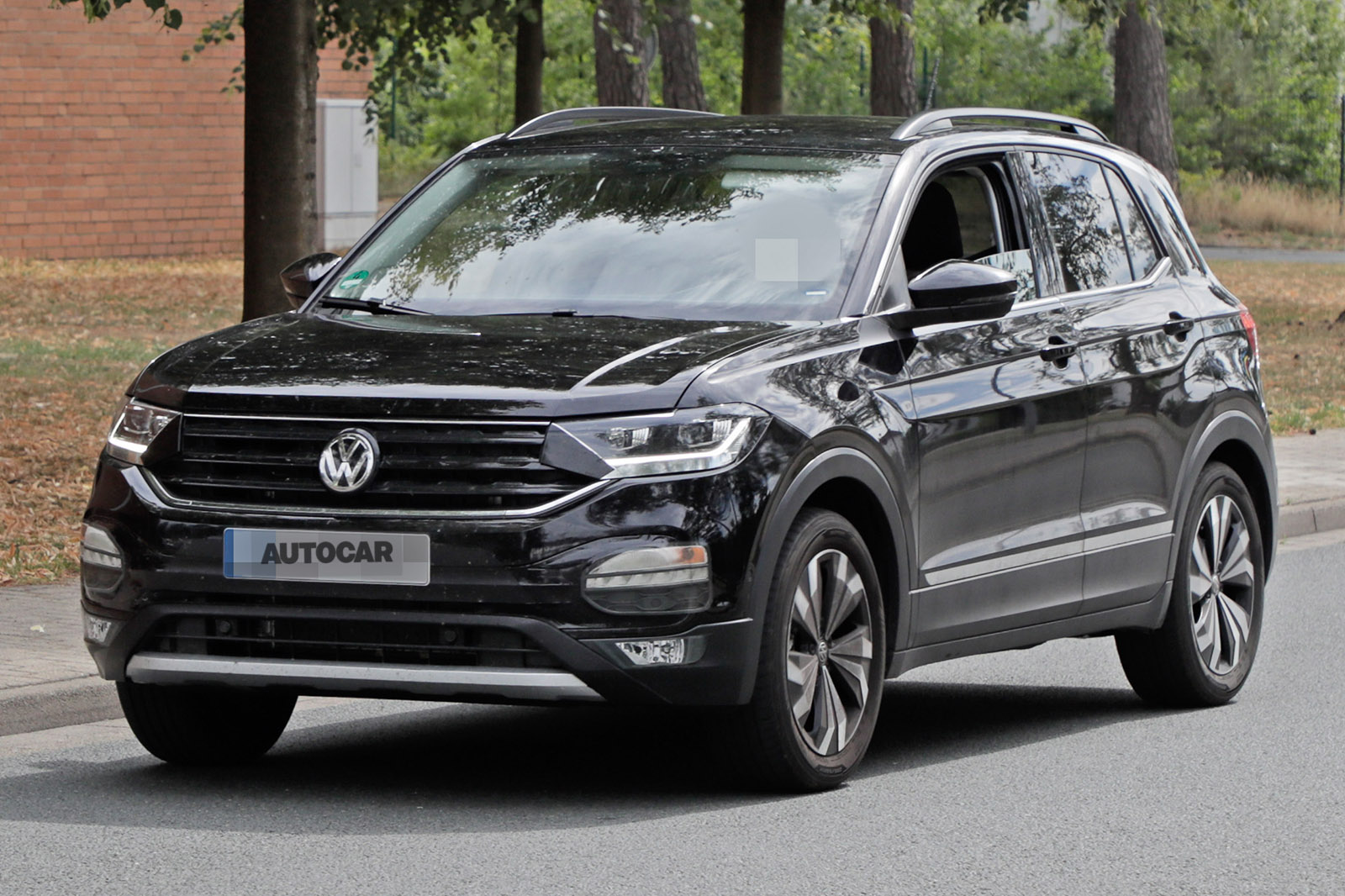 Engines will also be shared with the T-Cross’s Polo sibling, meaning that 1.0 TSI petrol and 1.6 TDI diesel units will make up the vast majority of the range (the cars we drove used these two engines).

While the platform has been engineered to accommodate a plug-in hybrid variant, the first-generation T-Cross is unlikely to be electrified. It is too small to yet be considered for what still remains relatively expensive hybrid tech; a 48V mild hybrid will only appear on the Mk8 Golf next year.

The T-Cross will not get a GTI variant, with VW having previously said the badge will only be used on its Up, Polo and Golf hatchbacks.

A harder R version is more likely, but a decision will be based on the success of the larger T-Roc R arriving next year.

VW design chief Klaus Bischoff told Autocar recently that the T-Cross’s design had already been signed off and was “not so far from the [T-Cross Breeze] concept”, albeit without its drop-top.

Between a t-roc and a hard place.

Autocar writes: "The T-Cross focuses on practicality, according to another preview revealed by VW, with 385-455 litres of boot space with the rear seats in place, depending on their position".

Is it not the case a T-Cross is a T-Roc with different trim / specs?

To carry the top window trim

To carry the top window trim across and down the rear side of the C-pillar is a Vauxhall signature. Am surprised it appears in this T-Cross.

These days VW models are really running out of ideas. Let's hope the Skoda & Seat versions are better.

is silver tape and won't be on the final car. It won't make it look any prettier mind.

The T-Cross focuses on practically

What. A tiny car like that?  Are they kidding?