BACK TO ALL NEWS
Currently reading: Renault Zoe given zero stars in Euro NCAP safety tests
UP NEXT
BMW opens door to M1-inspired electric supercar

The Renault Zoe, one of Europe's most popular electric cars, has been given a zero-star safety rating in the latest round of Euro NCAP crash tests, while Renault's sibling brand Dacia Spring EV was awarded just one star.

The Zoe becomes just the third car in Euro NCAP's history to record a zero-star rating, 20 years after the Renault Laguna became the first car to achieve a five-star verdict.

The Zoe previously held a five-star Euro NCAP rating but was entered into the tests following a substantial facelift last year which ushered in a bigger battery and extra power but also, the safety organisation notes, a new seat-mounted side airbag that protects just the occupant's thorax, rather than the head and thorax as it did previously.

This change represents "a degradation in occupant protection", according to Euro NCAP, which reported that in the side-pole-impact test, the "driver's head directly impacted the intruding pole and head injury values indicated poor protection of this part of the body". 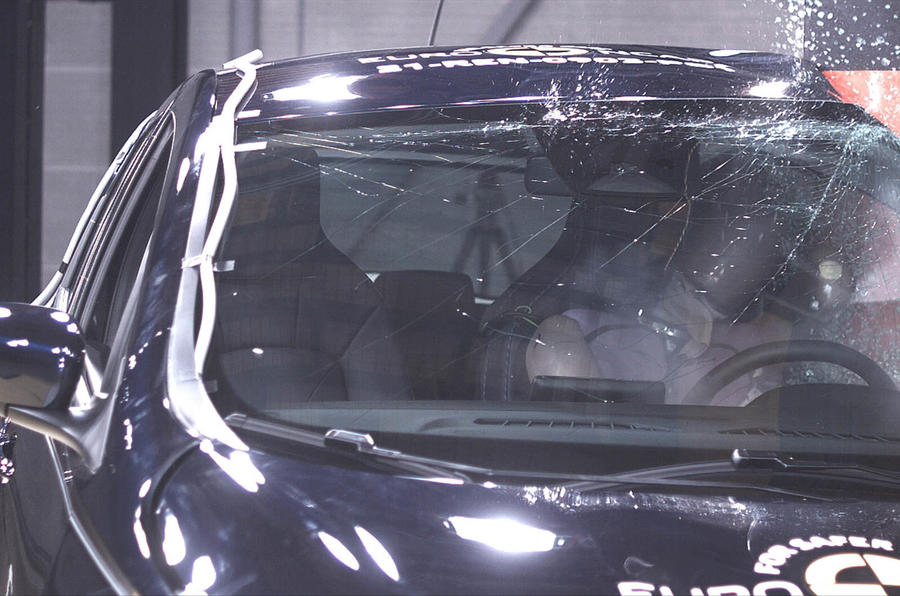 The supermini's performance in the frontal offset crash test was also "poor", with Euro NCAP citing weak protection for the driver's chest area and the necks of children in the back seats specifically.

The Zoe is also said to lack active safety technology "commonly fitted as standard", such as lane-departure warning and standard-fit automatic emergency braking (AEB), which vehicle safety research firm Thatcham says can reduce "front-to-rear crashes with injuries by 56%". Therefore it achieved a rating of just 14% in the Safety Assist category, some 61% lower than the 2021 average.

Importantly, however, Renault will make AEB standard to all Zoe models ordered from 1 March 2022.

Overall, the Zoe achieved a 43% adult occupant safety rating (the lowest for 11 years), a 52% child occupant rating and a 41% rating in the Vulnerable Road Users category.

Matthew Avery, Euro NCAP board member and chief research and strategy officer at Thatcham, told Autocar: “Every few years, Euro NCAP raises the bar by introducing new tests which either exploit new technologies or lift the hurdle to make manufacturers do better. If everyone is five-star, we need to lift the barrier."

As a result of these alterations, he explained: “When we first tested the Zoe, it did reasonably well and had all the elements you needed back then to get a reasonable score. But if you've still got the same design 10 years later, you aren't going to score as well.”

He said that the inclusion of the previous Zoe's side-mounted airbag might have pushed the current model's rating up to one star, but “it certainly wouldn’t be any better”, as “we would expect to see the general poor performance and red areas on the dummy”. He also clarified that the previous model's five-star verdict wouldn't necessarily still apply, given changes to the testing process.

The Euro NCAP crash test process isn't mandatory so is either undergone by cars entered voluntarily by their manufacturers or by cars purchased by the testing body itself.

In a statement sent to Autocar, Renault said: “Renault takes note of the results published by Euro NCAP following specific tests on Zoe E-Tech Electric according to its new protocol implemented in 2020.

"Renault reaffirms that Zoe E-Tech Electric is a safe vehicle, which complies with all regulatory safety standards. These standards are constantly evolving and are becoming more stringent in all domains, especially in safety. Renault therefore continually improves its offer in order to comply with the regulations applicable where its vehicles are sold.”

Renault also pointed out that the Zoe “has been launched with several standard elements according to the equipment level to improve the safety of occupants and other road users (Active Safety): front LED headlamps, overspeed prevention, advanced emergency braking with pedestrian and cyclist detection, lane-departure alert, lane-keeping assist, traffic-signs recognition, automatic high/low-beam switching of the lights [and] blindspot warning.”

It continued: "The Zoe was launched in 2013 and received 5 stars with Euro NCAP protocol at that time. The Euro NCAP protocol has since 2013 undergone five changes. With the same equipment, a model can lose up to two stars in each protocol change.

"The evolution of the current Zoe was decided in 2017 adapting the passive safety equipment to real accidentology and updating the car with state of the art ADAS equipment such as Advanced Emergency Braking with Pedestrian and Cyclist Detection, Lane Departure Alert and Lane Keeping Assist, using a radar and a camera."

The new Dacia Spring EV, Europe's cheapest full-sized electric car, which is set to go on sale in the UK in 2022, was awarded its one-star verdict on the basis that "its performance in crash tests is downright problematic," according to Euro NCAP. 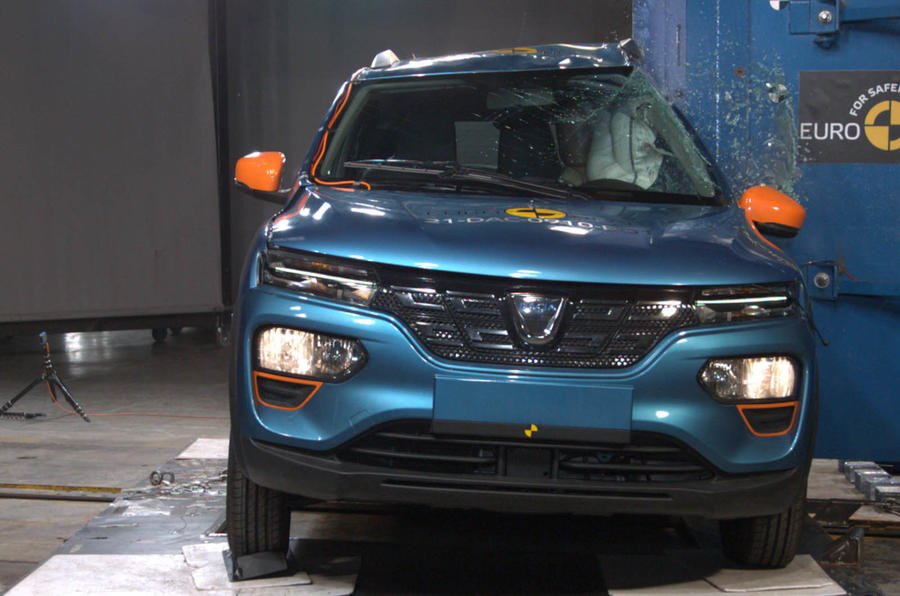 Despite being fitted with the head-protecting airbag removed from the Zoe, the Spring achieved only a 49% score for adult occupant protection, while a risk to rear-seat passengers resulted in a 56% child occupant rating.

Avery said: "This is anything but a safe family car, despite being marketed as a good option for families."

Citing an Autocar article from earlier this year, Euro NCAP noted that Dacia wins appeal with certain buyers who don't want "useless features" on their car but said that the Spring goes "beyond no-frills".

Avery said: “Dacia argues that drivers don’t need collision-avoidance technology. We would argue that’s not right, because nobody wants to have a crash; nobody wants to feel what it’s like to be smacked in the face by an airbag, really. So active safety is just as important as passive safety.”

He suggested that the Spring’s shortcomings in the active safety segment (ie. a lack of advanced driver aids) isn't necessarily compensated for by a strong active safety performance. It has “very poor active and passive safety,” he said.

Commenting on the Spring’s one-star rating, Dacia said: “[The] Spring is a safe new A-segment car. It is homologated, complies with European safety regulations and goes even beyond."

The manufacturer added: “[The] Spring proposes a full list of safety features providing better protection than most of the cars on the roads of Europe today (including those of upper segments).

"However, the contradiction remains between the light weight/small size of the car (which makes them more efficient and more accessible) and the resistance in terms of crash; especially with Euro NCAP protocols getting more and more stringent every two years, in particular for small city cars.”

The electric Fiat 500 and MG Marvel-R were given four stars apiece.

I think we all understand these systems, and most of us would be happier if other drivers had them fitted. The problem is that the technology doesnt work well enough, so people turn it off. If it never gave a false alarm people would leave it turned on, but be oblivious to its presence.

Dacia's attitude to safety is pretty depressing and weirdly laddish. As is the attitude of several posters here who think they're such great drivers they don't need help avoiding crashes that kill people. Many people call them 'accidents' of course, and maybe that's the point. People have accidents. So we need help to not have them. And you only have to watch the thousands of car crash videos on YouTube to know that we need an awful lot of help not switching lanes at the wrong moment and not running into the back of the car in front because we're too busy texting our mates about how clever we are at switching off the safety systems.

Yes, I'm perfect too, so I don't need any safety equipment on my car but I sure want everyone else to have it on theirs.

Why do we "need an awful lot of help not switching lanes at the wrong moment"?  I have a pair of eyes that I was born with that help me do that.

And as for "not running into the back of the car in front because we are too busy texting our mates"?. Where do I start with that?  Anyone who texts anybody while driving deserves to lose their licence at the very least.  I have never texted anybody, or even used my phone at all when driving.  Your insinuation that anybody posting on here does so based on what you have read is bizarre at best, immature at worst.

if you are so lacking in confidence in your own abilities as a driver that you cannot drive safely without loads of electronic driver aids, perhaps it is time to return your driving licence.

Lane Departure Warning is dangerous. It presents an additional distraction at the very time full attention is needed most. In an emergency I trust my judgement and skills to avoid an accident more than I do some contraption tugging at my steering, making the manoeuvre I need to complete both slower and more difficult. Or would you prefer I waste precious time  indicating to regain steering control, before avoiding the hazard. Cars without this jump further up my shopping list not down.

I want NCAP to concentrate on the structural integrity of the vehicle, the rest I can manage myself thank you.

The biggest safety feature in any vehicle is the driver and I would prefer a skilful one to one that relies on electronic wizadry to create a false sense of self satisfied arrogance.

@Old But not yet Dead.

I have a friend who was a Traffic officer in the police a few years ago.  On a night shift he and his crew mate were sent to something that had fallen off a lorry in an unlit stretch of the motorway in the middle of the night.  They were almost there when they got the call, and it suddenly appeared in front of them.  If the driver had bothered to indicate first before driving round it they would probably have hit it and might now be dead, and the system would probably have tried to pull thm back towards the object.  A truly dangerous system.

I presume you never drove a car with that system? It works only if you slowly drift over the demarcation limes and not when you pull hard. Any input from the driver will take priority and what gives back is just an audio or vibration "nudge", dependent if how the is implemented. Top that, it can't take you by surprise as you can disable that first time you use the car. I presume you're checking to see what systems are implemented on the vehicle you drive as the driver must have full knowledge and control of if and how abs, (adaptive?) cruise control, emergency breaking, electric hand brake, and so on, will function

I have driven a car with that system.  Read my other posts.

Hated it.  Turned it off.