BACK TO ALL NEWS
Currently reading: New Assisted Driving Grading aims to reduce safety tech confusion
UP NEXT
Two worlds collide: Porsche Taycan vs Alpina B3

Thatcham Research and Euro NCAP have jointly launched a new grading system for driver assistance tech to reduce confusion around its capability.

The Assisted Driving Grading will supplement Euro NCAP’s traditional crash test and feature-based star rating system, providing scores for the effectiveness of the driver assist tech on offer, its ability to keep the driver engaged in the process of driving and its performance in an emergency.

The safety bodies will also consider the way the systems are marketed by each manufacturer, determining whether they encourage the driver to put too much faith in them.

“The systems that are currently allowed on our roads are there to assist the driver - but do not replace them,” said Matthew Avery, Thatcham’s director of research.

“Unfortunately there are motorists who believe they can purchase a self-driving car today. This is a dangerous misconception that sees too much control handed to vehicles that are not ready to cope with all situations.”

Avery also claimed that legislators, insurers and manufacturers cannot move to the next step of automated driving if the full capability of assisted driving tech is not understood clearly by consumers.

The Assisted Driving Grading uses a sliding points scale across multiple categories, with 200 points awarded. The points awarded in testing put the car into four categories: Entry (between 100-120 points), Moderate (over 120 points), Good (over 140 points) and Very Good (160 points or more). Cars that score below 100 points are classed as Not Recommended. 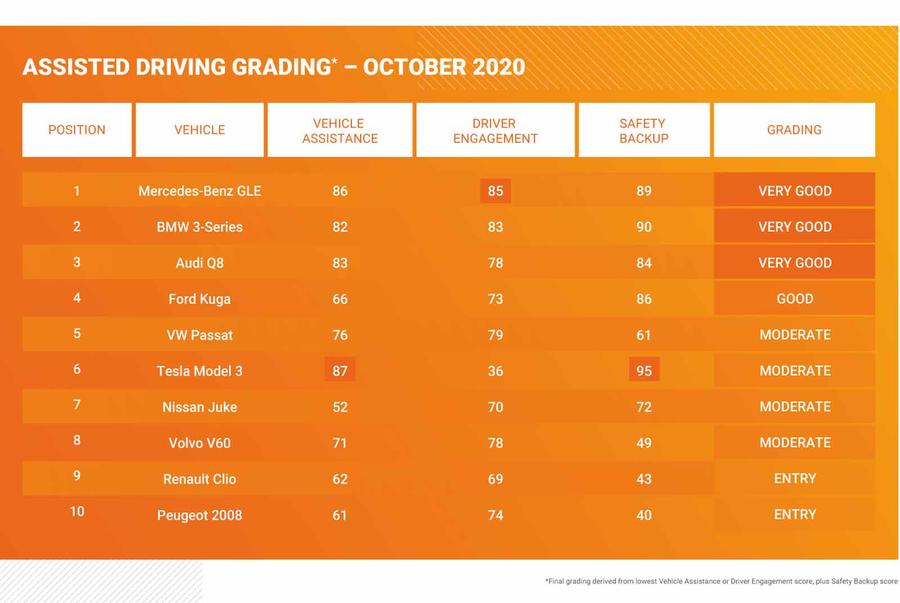 The first batch of 10 results issued includes the latest Renault Clio (awarded an Entry rating as an effective but basic system), the Tesla Model 3 (given a Moderate score and criticised for reduced driver engagement and misleading marketing) and the Mercedes-Benz GLE (which achieved the highest rating of the cars tested so far).

“The best systems strike a good balance between the amount of assistance they give to the driver and how much they do to ensure drivers are engaged and aware of their responsibilities behind the wheel,” continued Avery. When performing at their best, the systems can both reduce fatigue and keep the driver out of trouble.

Autocar attended a demo session at Thatcham’s test track to try out few of the methods used to test the systems. With Avery in the passenger seat, we went out first in a BMW 3 Series (one of the highest rated) and then a Tesla Model 3, illustrating the differences in the systems at a broadly similar price and size point.

One was a traditional scenario where the car has to react to a stationary car in front with no driver input. Both systems worked well, with the Tesla in particular gently braking well in advance and slowing smoothly to a stop. 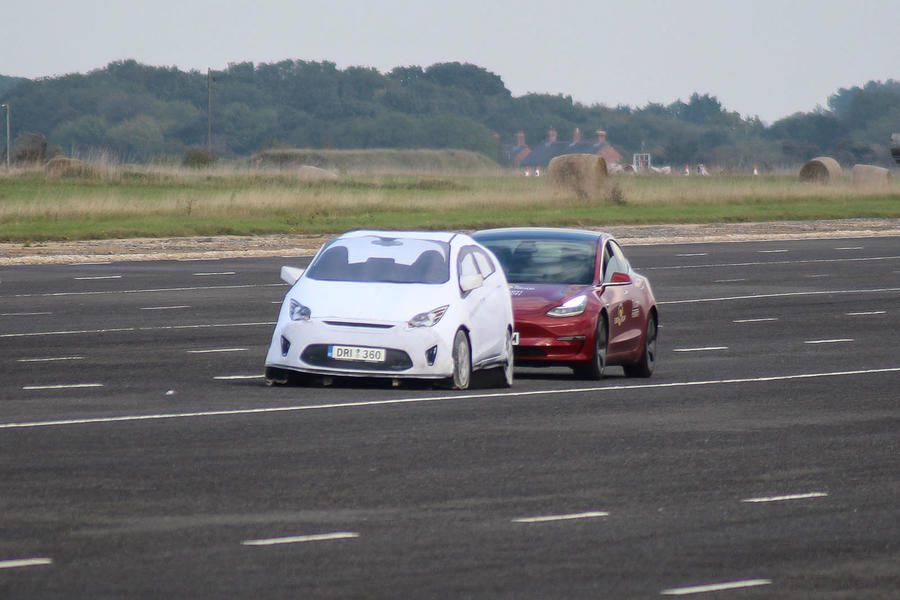 More interesting was the ‘pothole avoidance test’. Rather simply, a cone is placed within the car’s lane and, with the lane assist and adaptive cruise control functions activated, the driver has to quickly and sharply regain control and steer around it.

When approaching the cone in the BMW with the systems on at 50mph, we were able to easily apply steering without the system fighting our inputs, with it quickly reactivating on our return to the lane. In the Tesla, however, real effort was required to break the system’s set steering angle, whereby it fully deactivates with a series of warnings.

“The BMW’s feels far more like a support system interacting with the driver, whereas the Tesla’s system, despite being very capable, actively discourages drivers from engaging from behind the wheel,” said Avery. “The BMW very quickly brings the driver back into the loop [if they keep their hands off the wheel] and makes it clear what the driver should be doing. There is never a situation where it feels like the car is doing all the driving and you are not, unlike the Tesla.”

The other reason why Tesla’s system isn’t up with the highest graded is in the marketing itself. “The use of the term Autopilot, and the descriptions surrounding it, we think are misleading,” Avery said.

From this month, an Assisted Driving Grading will be provided on every new model that features steering, throttle and braking assistance. Thatcham and Euro NCAP hope it will bring clarity to buyers and also help towards the UK government’s intention to legalise hands-off automated lane keeping systems on motorways in 2021.

This kind of testing has been long overdue imo, particularly the false impressions being given by Tesla with the false connotations inevitably brought about by the 'Autopilot' name. In reply to previous comments expressing ridicule at the points deduction due to lack of driver input, the problem is that no system - no, not even Tesla's - is capable of full autonomy in all situations. If that were the case, then yes, the points deduction for lack of driver input would be silly. But seeing as current systems are merely assistance systems - i.e. they just assist the driver - then it has to be ensured that the driver is still in full control of the vehicle and ultimately repsonsible for whatever happens, with the tech simply alerting the driver of danger and helping in avoiding a collision.

I can't believe there are "Satnav says" drivers out there who'll Blythely do what a electronic voice says!, so, yes there has to be some sort of system to prevent accidents created by these drivers.

Another desperate attempt by NCAP and Thatcham to remain relevant and charge for their services!  Why on earth would you penalise something that tries to remove that most usless of all car systems - the human driver.  Again, most Autocar readers enjoy cars and driving so can't understand that 99% of the population don't care about driving.  Just this morning: 2 drivers deliberately jumped red lights, another slammed on his brakes when the next lane over went red (not ours) and an incompetent buffon actually went the wrong way round a town roundabout causing 10 other cars to slam on and beep horns. Driver was oblivious.  And Thatcham NCAP give systems more points for prioritising humans!!