BACK TO ALL NEWS
Currently reading: Audi Sport to go electric with RS-branded E-tron GT
UP NEXT
New Aston Martin DBR22 is £1.5m, V12 speedster

Audi Sport is ramping up its electrification offensive under new management, and will next year introduce the RS branding to a battery-powered model in the form of the production E-tron GT saloon.

The sister model to the Porsche Taycan, set to be offered in regular, S and high-performance RS trims throughout its existence, is also likely to be joined by an RS version of Audi’s recently revealed E-tron Sportback. A number of plug-in hybrid RS models are also on the cards, while a new E-tron version of the current-generation Audi R8 is tipped to appear next year as a prelude to a possible all-electric R8 replacement in a few years’ time.

The plan for the Audi Sport division to embrace hybrid and electric propulsion has been devised under the joint management of directors Oliver Hoffmann and Julius Seebach. Expanding into new EV and PHEV markets is the priority now the division’s SUV offensive is well under way; this year it has launched the RS Q3 and RS Q3 Sportback, the diesel-powered Audi SQ5 and both Audi SQ8 and RS Q8 range flagships. 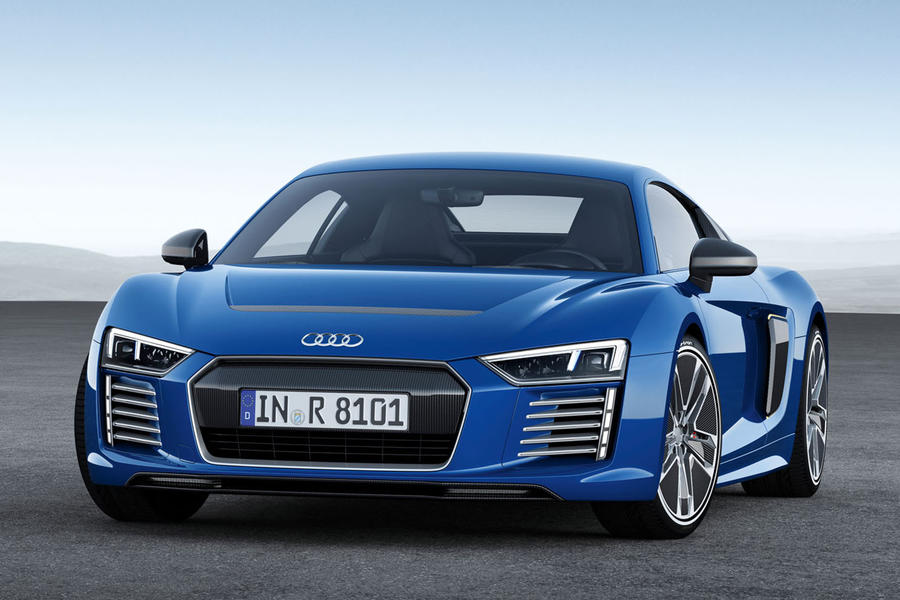 Speaking at the recent Los Angeles motor show, Seebach confirmed that the E-tron GT – revealed in concept form at last year’s LA show and later driven by Autocar – will be offered with the same three powertrain choices as traditional Audi models, such as the Audi A6, S6 and RS6.

The concept E-tron GT featured a dual-motor, all-wheel-drive electric powertrain making 582bhp and around 600lb ft. A 96kWh battery gave a claimed range of 250 miles, with 0-62mph quoted in 3.5sec. The production version, which will make its debut at next year’s LA motor show, will share its J1 electrical architecture with the Taycan, but it’s not clear if the Porsche’s three-variant lineup, comprised of the 523bhp 4S, the 670bhp Turbo and 751bhp Turbo S, will transfer over with identical specs.

More likely is that the base E-tron GT will start at a lower output, and therefore a lower price point, than the base Taycan. Both cars will use the same 800V electrical architecture, however, and weigh about the same. Expect standard and S models at launch, with the RS arriving slightly later. 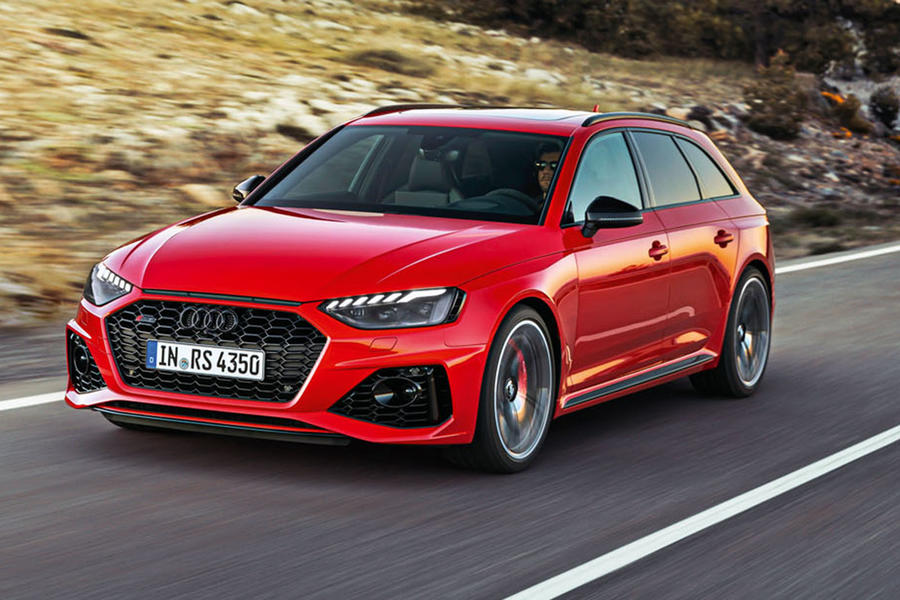 Seebach also confirmed that, as Autocar first reported in September, plug-in hybrids are formally under development by Audi Sport’s engineers. The powertrains will be introduced on the next generation of RS models, and it is understood that the first Audi RS model to be offered as a PHEV will be the next-generation RS4.

That car will compete head to head with the next Mercedes-AMG C63, which, as confirmed in October, will ditch the current car’s V8 in favour of a 500bhp-plus plug-in hybrid four-cylinder powertrain. It will also be four-wheel drive, challenging Audi Sport’s long-established quattro system when it arrives in early 2022. Expect the new RS4 to arrive slightly later, given that the current model only went on sale last year.

Discussing the potential for an RS E-tron Sportback, Mindt said: “It’s very similar to what you see with the RS Q8. You have to start with the standard car and build it up.”

Such a model would carry over the classic RS design principles of big wheels and an aggressive bodykit to help differentiate, while changes to the chassis and steering will also be introduced. In a theoretical sense it’s relatively easy to turn up the wick for the electric motors, which in the standard E-tron Sportback together put out 402bhp in the most powerful Boost mode. One possibility already hinted at is the introduction of a third electric motor, which would not only significantly increase peak outputs but also allow torque to be apportioned across each individual rear wheel for more neutral handling qualities.

A timeframe for a performance Audi E-tron SUV is unconfirmed, but prototypes of a standard-bodied E-tron with uprated, lowered suspension have been seen lapping the Nürburgring since May. It’s possible we’ll see something previewed next year for introduction in 2021. 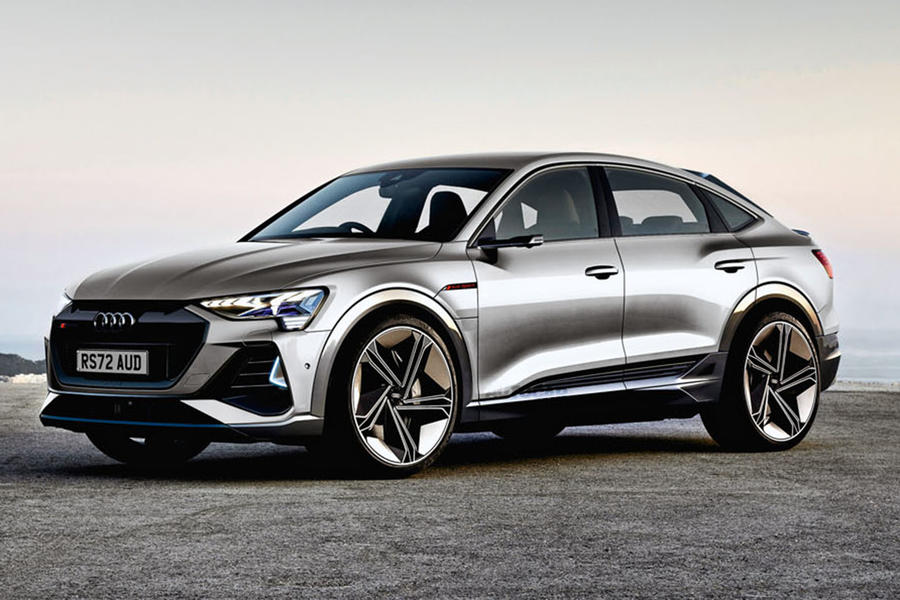 Before all this, however, it is understood that Audi will revive the all-electric R8 E-tron as an upgraded model to go into limited production once again late next year. The brand first presented a second-generation version of the pure-electric supercar in 2015, but production was canned around 16 months later due to extremely slow demand. A price tag of around £850,000 was considered to blame for Audi only producing 100 examples in that period.

Details of the new car have yet to be made official, but it is expected that it will look broadly similar to the 2015 car (see previous page). That model used a dual-motor EV powertrain, mated to a 92kWh battery, putting out 456bhp and 679lb ft for a 0-62mph time of 3.9sec and a promised range of up to 280 miles.

Substantial developments of EV powertrains over the past four years mean that a power increase is likely, but the focus for Audi will be to bring the model’s price down to a more reasonable figure. Nevertheless, it is not expected that the revived R8 E-tron will be any more than a limited-production model.

Why I won't be buying one !

I consider myself a car guy, I value the passion and excitement that cars like the GT3, GT4, 205GTI and Integra Type R represent, to name but a few I have owned over the years. I like performance, speed, stealth and cutting edge technology. Yet having driven a Tesla model S on numerous occasions, and a dual motor Model 3 once, I have no desire to embrace the future if that represents the future. I fully accept that electric and hybrid electric vehicles are the future whether it be Ferrari, Ford, VW or Porsche, but they do not excite me or make me 'want' one. Will this change or do I need to change? A friend here in Florida has a Shelby Mustang GT500 and whilst not my cup of tea, the sense of occasion and drama when going for a spin in that is missing in the electric offerings of similar performance I have driven?

The green car looks real mean, I do hope Audi has the nan veggies to put it out the Factory gate as is.

Is that my grandmother's potato bake you are alluding to?!?

Talk sense for once please Cavellini