BACK TO ALL NEWS
Currently reading: Audi E-tron GT concept 2018: first drive of electric sports saloon
UP NEXT
Testing the UK's newest circuit in a Porsche Cayenne Turbo GT

Is Audi’s apparent confidence in its electric four-door coupé justified? We find out with a prototype drive in downtown LA rush-hour traffic
Open gallery
Close

Time behind the wheel can be very restricted, sometimes to a couple of hundred yards in a straight line or two laps of a car park at 10mph. You’re surrounded by minders who are understandably nervous at the thought of a careless buffoon climbing behind the wheel and wrecking a near-priceless piece of their brand’s design history, and any hint of rain always stops play.

There are rare exceptions, though, and our time driving Audi’s new E-tron GT was one of them.

After last month’s Los Angeles motor show, where the E-tron GT made its debut, Audi pulled the concept, claimed to be worth €5 million (£4.5m), out onto the streets and gave a select group of journalists the chance to take it for a spin. On the public road. In downtown LA. During rush hour. Escorted through red lights by police officers on motorcycles. This sort of thing doesn’t happen often.

It’s perhaps unsurprising that Audi was so keen to let us try the E-tron GT in a real-world environment. After all, it may officially be a concept, but those involved tell us it’s 95% finished visually, and a significant amount of the development work for the car’s oily (well, sparky) bits has been completed. The electric four-door coupé is due to arrive in production form in around 18 months, with only a handful of small-scale changes from the prototype.

The E-tron GT will be the third EV from Audi to roll out after the recently launched Audi E-tron and upcoming E-tron Sportback SUVs. That’s three out of a planned 12 bespoke electric Audis due to be launched before 2025, as part of a €14bn (£12.6bn) investment plan for one brand alone. The sum itself is a fraction of the simply vast cash reserves being ploughed into transforming a number of the Volkswagen Group’s marques into mass-volume electric car makers. 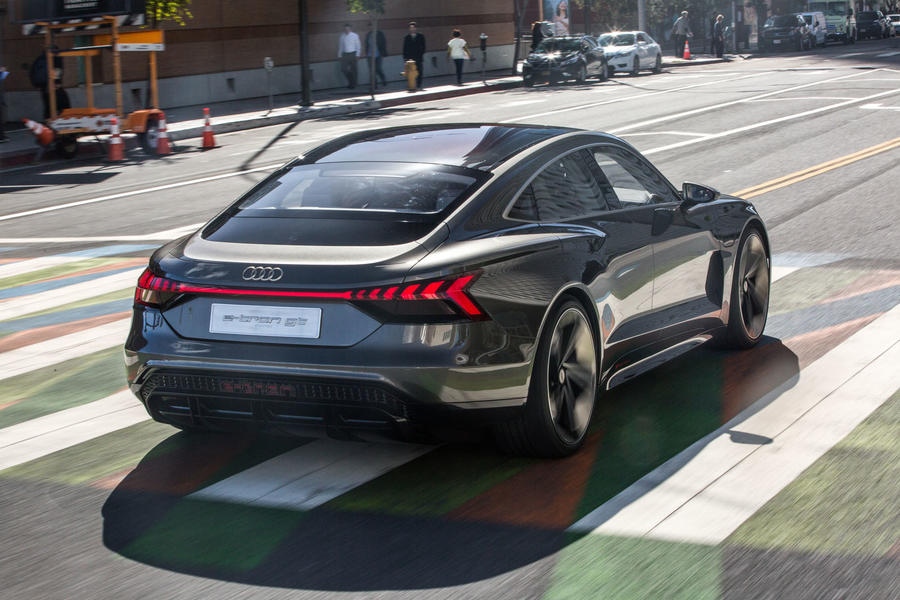 Part of the reason for this is that the VW Group needs to be seen to be reacting in a wide-reaching way to the infamous Dieselgate scandal. Audi bosses will trot out the official line that diesel remains an important part of its range – and, for the time being, it still is. But, behind the scenes, they know that the sooner they can distance themselves from the fuel, the better.

Then there’s the Tesla factor. The controversial Californian electric car firm has enjoyed a meteoric rise in the past few years, pioneering not just with large, long-range and high-performance EVs, but also desirable ones. It’s still only churning out about one car for every 18 Audi makes, but let’s not forget that at the turn of the decade Tesla was posting annual sales in the hundreds.

The significance of Audi launching the E-tron GT in California cannot be ignored. This is the Tesla fanzone: the increasingly environmentally conscious, tech-savvy state takes in nearly 50% of the US’s total EV sales, and you can’t walk for more than two minutes through LA’s financial district without catching sight of a Model S, X or 3 with an ‘amusing’ personal numberplate.

Rocking up at the on-trend kerbside event room Audi has hired for the day, the E-tron GT immediately catches the eye. You don’t have to be Poirot to work out the inspiration behind the four-door coupé, occupying as it does roughly the same footprint as a Model S and operating at the same price and performance level. But the design, to my eyes, is far more arresting than the now five-year-old Tesla.

First, there are the proportions. The GT is strikingly low and squat for an electric car, particularly one that’s meant to be able to seat five in production spec. Exterior design head Andreas Mindt claims that balancing the space demands of a chunky 96kWh underfloor battery with the need to seat two adults in the rear in comfort was “perhaps the biggest challenge”. But it’s a challenge that was met, with the E-tron GT’s roofline a full two inches lower than Audi’s comparable Audi A7 Sportback. The trade-off is the car’s near-two-metre width, necessary for the battery’s substantial surface area.

Audi hasn’t yet rolled out the cameras-as-mirrors system that’s an option on the E-tron SUV, for two reasons. First, it’s still not a legal set-up in the US for a production model. And second, the traditional mirror, set to be larger on the production car than on the prototype, pushes air away from the rear end, which, according to the designers, has allowed them freedom to pen the car’s distinctive haunches that jut out and curve around the back.

The prototype E-tron GT’s doors are opened by a touch capacitive padlock logo mounted on the B-pillar, but again that’s been junked for production in favour of plain old handles, necessary for safety reasons.

Step inside and you’ll find a cabin that doesn’t look or feel a million miles away from production – not everything is functional, yet the fit and finish already feel better than in your average Tesla product, let alone any other prototype we’ve tried. There’s bad news for the touchscreen-phobic, though: Audi has increased its display screen count to four, including a new configurable one mounted up by the rear-view mirror.

Despite designers insistently referring to it as “more of a sports car than a sedan”, there’s sufficient space for four adults to travel in comfort with suitably low seating positions, although six-footers will brush the headlining in the rear. 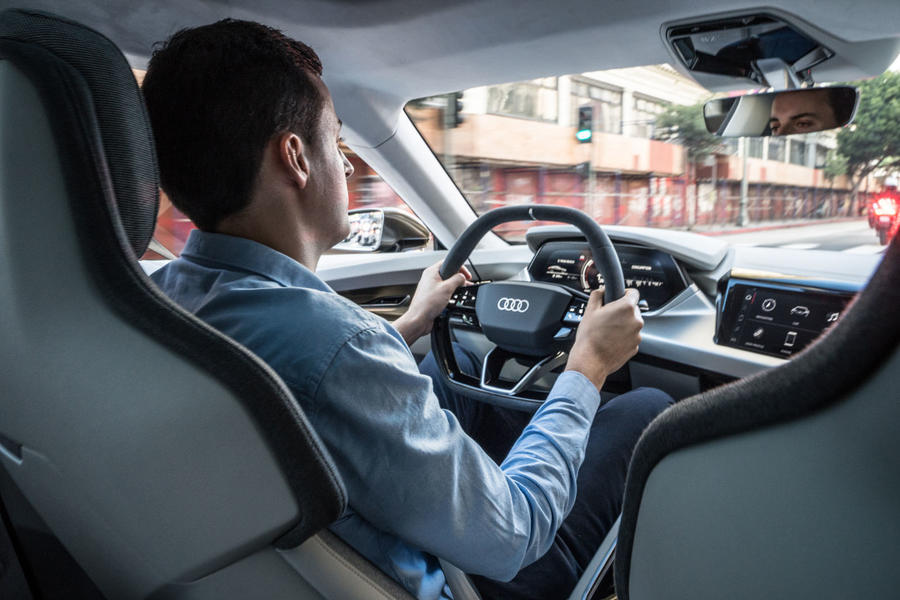 But enough about head room: what about the powertrain? Well, Audi has provided some conveniently rounded figures for the concept that are targeted for production. A 0-62mph time of 3.5sec, 0-120mph in under 12sec and a range of 250 miles on the new WLTP test regime. All Tesla-baiting figures that should be easily deliverable by 2020.

Engaging drive in the E-tron GT is as simple as selecting D on the new push-button gear selector (set to gradually replace the rocker gearshift in current Audis), stabbing a button marked with a chequered flag on the wheel and pulling away.

Of course, the only noise registered from inside comes from the burbling motors of the police escort bikes – ridden by retired officers, if you were wondering why they are catering for spoiled journalists rather than out catching criminals.

The lack of squeaks and rattles as we negotiate our first crossroad is very unlike a concept car. The whirr of the motor isn’t as well insulated as it will be for production, but its response in our admittedly low-speed situation is as crisp as you’d expect from a brief stab of the accelerator.

The steering feels consistently weighted and accurate, and the brakes seem unusually consistent for a regenerative set-up.

Yet something that’s clearly not finished is the suspension: the GT will have double wishbones combined with air springs for production, and the current steel spring and damper system is seriously stiff, pogoing over broken and undulating surfaces. It’s likely that the ride height will increase slightly for production. The potential for this car to offer a reasonably dynamic driving experience is there: after all, it has a lower centre of gravity than an R8, rear-wheel steering and electric torque vectoring.

Chances to test the handling, outright performance and, indeed, the range are limited here. The only firm conclusion I can draw while we wait at the lights for the photographer to set up is that the air-con isn’t functioning. It’s November but in the mid-20s, and the glass roof is gently cooking the GT’s occupants. What’s easier to gauge is the amount of attention from the smartphones being pointed at our car by passers-by, even in a city known for its fair share of dramatic public spectacles.

As we pull up back where we started, the car’s minder lets slip that we will be seeing the E-tron GT on the move again soon – as Tony Stark’s ride in the next Avengers film, due for release in April.

While the public will decide if the blockbuster marketing pays off, this early go behind the wheel delivers a promising insight into Audi’s battery-powered future. 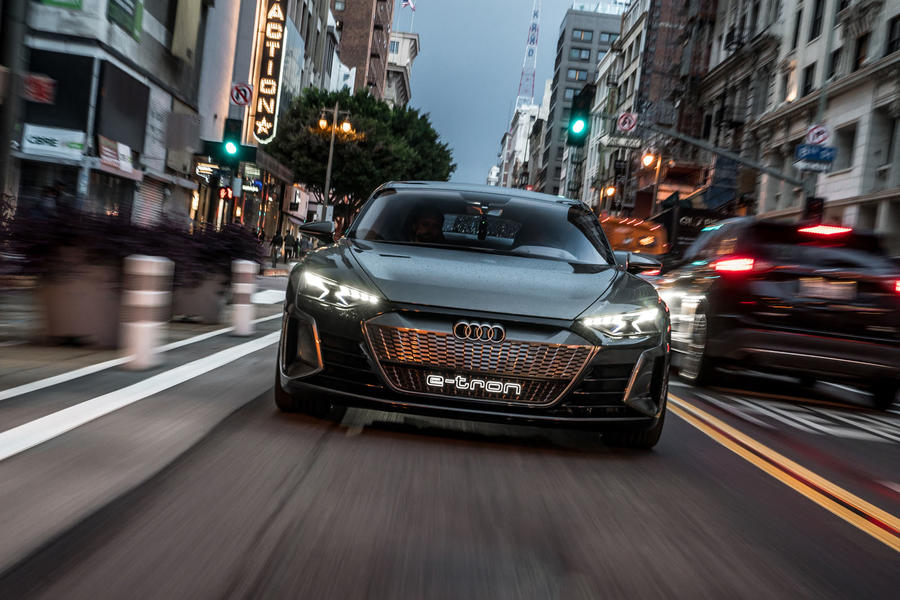 I'm sorry but in what world is 250 miles on the WLTP range test Tesla baiting? That probably equates to about 200 miles on the EPA test, or 135 miles less than the 100D!! That's falling short by over 40%!! It's a great looking car, and I'm sure it'll be solidly engineered but those range numbers are embarassing.

But the rear window should be a full hatch and ditch the contrived blacked out section across the bottom third of the glass.