BACK TO ALL NEWS
Currently reading: Tesla Model Y deliveries begin ahead of 2022 UK debut
UP NEXT
New Aston Martin DBX variant is "world's most powerful luxury SUV"

Tesla has announced that deliveries of its Model Y electric compact SUV have begun, and that the Fremont factory where it is produced will continue to operate despite a global automotive shutdown.

Early buyers of the all-electric crossover have started receiving their cars, and an official video posted to Tesla's Twitter feed (below) shows the Model Y in operation. It comes as car manufacturers worldwide enter a state of shutdown in response to the coronavirus pandemic; it had initially been reported that Tesla's Fremont plant would close - as a result of the 'shelter in place' policy being implemented in California - but it has been deemed an 'essential business', and will remain open for the foreseeable future.

The first versions to arrive will be the Long Range, Dual Motor and Performance models. The car is likely to arrive in the UK by 2022, based on previous Tesla model roll-outs globally.

The Model Y is compatible with Tesla’s third-generation Superchargers, which are capable of 250kW charging. Cars will be able to recover 75 miles of range in five minutes, with a peak charging rate equivalent to 1000 miles for every hour. Tesla now has more than 12,000 Superchargers globally across 36 countries.

Inside, the Model Y has a similar interior layout to the Model 3, with a single 15.0in touchscreen interface containing all of the car’s controls, and no traditional instrument cluster. It also includes the same "self-driving" hardware, including Autopilot, which can be unlocked for a fee and upgraded wirelessly as new features gain approval from regulatory bodies.

Split-folding second-row seats and a front boot provide a maximum storage space of 1869 litres. Its rear hatchback should prove more convenient when loading than the Model 3's tailgate. 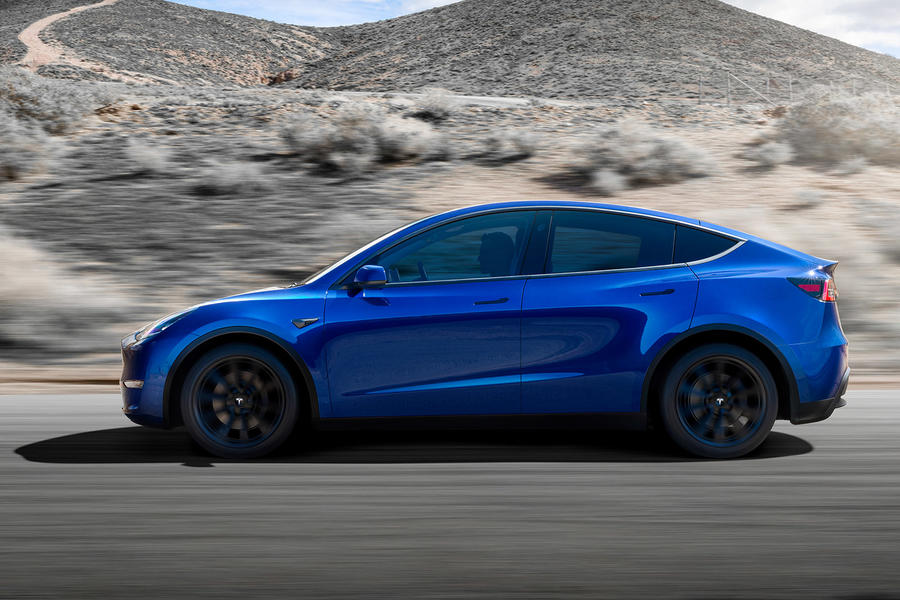 The Model Y will likely prove pivotal to Tesla, because the worldwide demand for SUVs is significantly higher than it is for saloons. Musk predicted that Tesla would go on to sell more Model Ys than its other three models combined. The company opened pre-orders after revealing the car, with customers being asked for a $2500 deposit. Seven-seat versions won't be available until 2021.

The company also faces new challenges from European car makers including Audi, BMW and Mercedes-Benz, which are gearing up to launch their own premium SUVs. Similarly priced rivals, though, such as the Kia e-Niro and Hyundai Kona Electric, can't match the Model Y's range. Tesla recently announced a move to online-only sales and plans to close all its physical stores, but changed its decision following a customer and employee backlash.

The announcement of the Model Y came soon after the entry-level Model 3 went on sale in the US at $35,000 (£26,000) and the first left-hand-drive versions of the more expensive Model 3 Performance arrived in Europe.

Tesla will be hoping to avoid the manufacturing issues that plagued the Model 3, which suffered production bottlenecks for months following the car’s North American launch. Tesla has since recovered from these early setbacks and is on course to achieve its factory target of 10,000 cars per week. It's now the world’s top-selling electric car, having sold more than 120,000 examples in the last year. Tesla aims to produce 2000 Model Ys per week by September 2020.

With the Model Y now revealed, Tesla’s remaining projects include the Semi lorry, the Cybertruck and the new Roadster, which is due to arrive on roads in 2020.

The headline of this article

The headline of this article is a bit of a joke.

Tesla said some time ago that they would begin deliveries in mid to late 2020, Autocar has then added the delay associated with the Model 3 which famously didn't go well and hence ends up with a date of 2022.

Tesla has delivered the first Model Y in early 2020, they plan to deliver the first to Europe in mid 2020. I'd be surprised if their weren't RHD cars before year end especially as UK tax changes are very favourable to Tesla's.

In short the headline is misleading, we don't know when UK deliveries will be and have every reason to believe that it will be well before 2022.