From £56,6058
Audi chooses a 48V-assisted TDI V6 for its latest performance exec, despite diesels being in the doldrums
Close

The easy way to view the arrival of the new Audi S6 is as a new and enticingly warmed-over executive four-door, a decent progression from its predecessors but nothing more controversial than that.

The new S6 – like its close relatives being launched at the same time, the S6 Avant estate, S7 Sportback and SQ5 soft-roader – gets its extra performance from a brand new 48V mild-hybrid powerplant whose heart is a new turbocharged 3.0-litre V6 diesel engine. And diesels, as we know, are in sales decline in the UK following Dieselgate and publicity over the danger to human health caused by exposure to untreated diesel exhaust constituents, principally NOx.

Thus the far more intriguing story is about Audi launching a new generation of S6 models that depend on a form of motive power already discredited in some vocal quarters. There won’t be an S6 petrol alternative offered here. The new cars may well deserve customers but, to succeed, they’ll need to buck a strong market trend.

Audi naturally deploys good arguments to back its move: it cites the low CO2 output of diesels compared with petrols and the fact that the latest exhaust treatment paraphernalia makes 2019 diesel exhausts cleaner than the EU requires (and capable of passing the looming Euro 7 standards). Of course, their impressive fuel economy and generous touring range help many drivers, too. 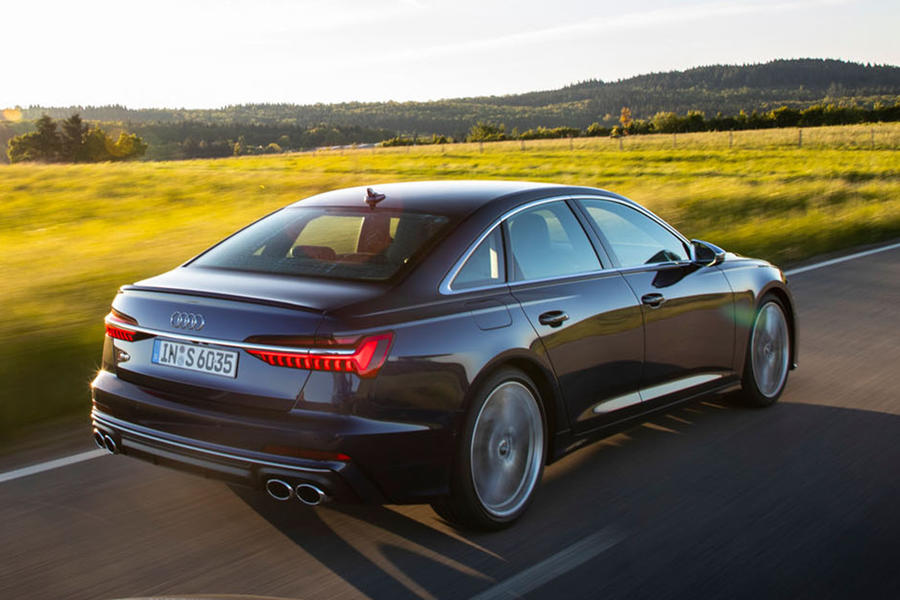 The heart of the S6 is a north-south nose-mounted 3.0-litre V6 equipped with a 48V electrically driven compressor whose output keeps the turbocharger spinning, even when the crankshaft speed is low, to cut spool-up time and reduce accelerator lag. The system also incorporates a 48V belt-driven integrated starter-generator that under acceleration contributes to peak outputs of 344bhp at 3850rpm and 516lb ft of torque at 2500-3100rpm. When the car is coasting or on the overrun, it collects power in a 0.48kWh battery for later use in acceleration.

The hybrid power is directed through an eight-speed dual-clutch automatic gearbox to a permanent four-wheel-drive system, which at extra cost can be specified with a sport central differential to sharpen the car’s agility in corners.

Audi says the mild-hybrid part of the powertrain contributes around 2-3mpg to real-world fuel consumption and helps the whole system run cleaner. The official WLTP combined fuel consumption figure is 36.2mpg and the CO2 output is 164g/km – both impressive results for a five-metre, two-tonne saloon that can pull a 5.0sec 0-62mph time and reach a governed 155mph in very short order.

You can easily distinguish the S6 from its cooking A6 relatives by its different, sportier front apron with wide air inlets either side, its aluminium-look mirror caps, its distinctive wheel designs and its special rear diffuser. Plus badges, of course. Inside, it gets various fascia and door-mounted inlays in aluminium, special sports seats and a very high-equipment specification. Every S6 also comes with sports-oriented suspension with variable damper control. You can specify adaptive air suspension, while other key options include ceramic brakes and dynamic four-wheel steering.

None of the above prepares you for the surprise of starting the engine. The second it bursts into life, you’d swear you were sitting behind a well-schooled, big-capacity petrol V8, so evocative is the sound it makes. Audi’s engine developers have judiciously equipped the system with discreet sound generators, and they really work. Start driving and the impression increases. There’s lots of torque at low revs and the throttle response, although not quite instant, is as good as many an old-school V8 and as strong. The S6 accelerates powerfully through the speed range, pulling 5000rpm on change-up if you can find the place to hold it flat, otherwise slipping quickly, quietly and effortlessly through successive gears (its precise behaviour varied by your choice of driving mode: Sport, Normal or Economy).

The handling is very good but falls short of inspirational. The S6 is heavy for its class and has a good deal of nose weight, so the turn-in is decent without being as adjustable or energised as some. The same goes for holding a line in long, fast bends. But it’s accurate and stable, and as far as we were able to tell in dry, early summer conditions, its traction is terrific. Audi still steals a march on competitors by offering four-wheel drive, although the driver has to contend with extra weight and its consequences. 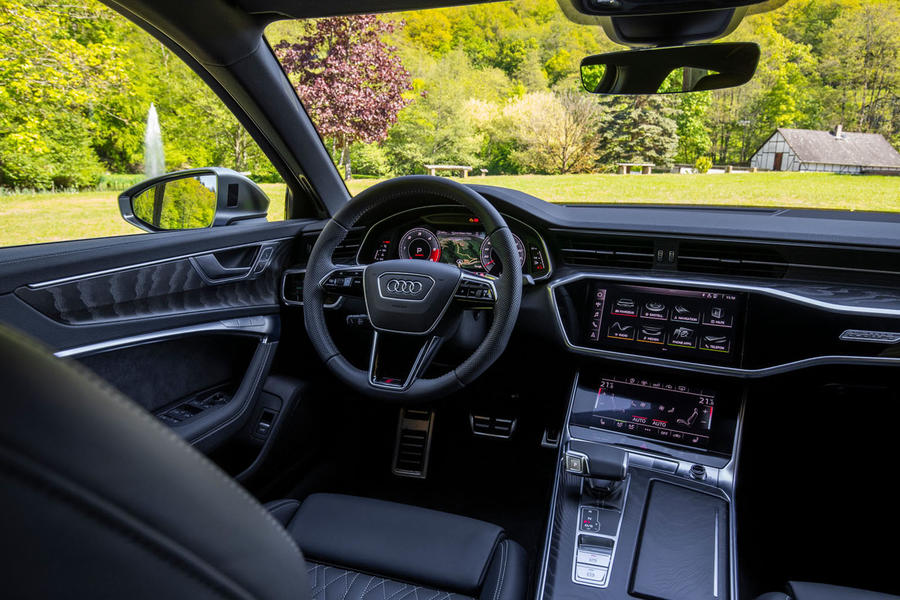 Whether you should go for the S6 is the million-pound question. For many, the engine sound and behaviour will do much to sell it. You simply don’t imagine that something badged TDI could behave like this. But it is a diesel, and a £60,000 diesel at that. Whether a user-chooser will be allowed to take the perceived risk of purchase by his or her employer is a moot point.

Other cars in this bracket offer a bit more chassis adjustability, but precious few are as well made, go as fast or as far on a gallon or sound as great. Tough choice. 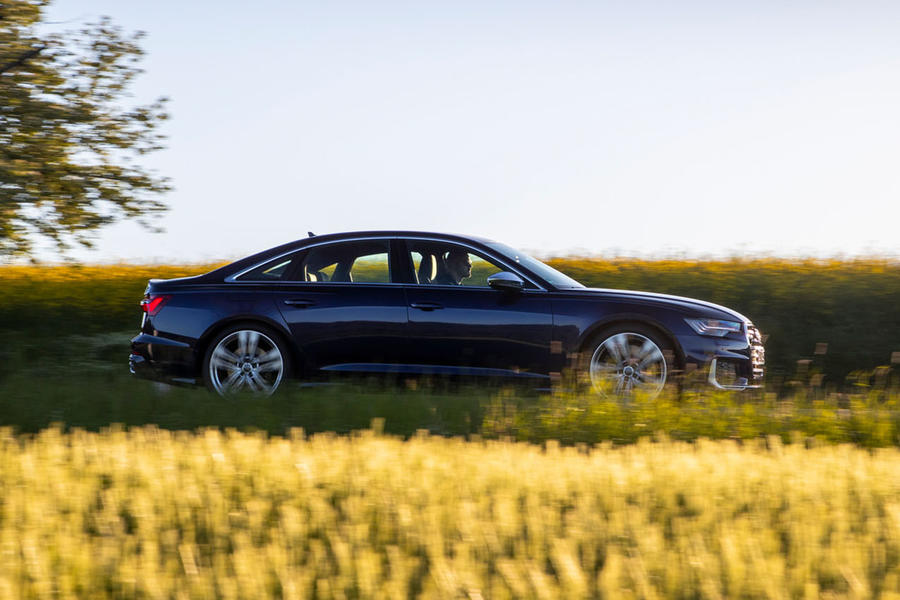 It'll be interesting to see...

After a small search it appears...

23 May 2019
And ride comfort and general refinement?

And ride comfort and general refinement?

Add adaptive air suspension, and I am sure refinement and comform will be very good. The A6 is a very refined car anyway.

And ride comfort and general refinement?

It is an Audi with big wheels. So shit and alright with the expensive optional suspension. Just like almost every Audi. Crappy steering too.

Autocar should just accept that Audi's will always be like this because this is how it wants to make them and what its customers buy/lease.

What crappy reporting , the M5 and C63 are not rivals and the latter is in the smaller class.the only 6 sedan I would buy is an RS6 not this diesel crap, but anyway it is too big for narrow Scottish roads and towns, an RS3 will run rings round it!

I agree with madmac

No wonder mags like Autocar are going bust and closing.  The was a time when they contained tech details, facts, objective comparative tests and were a reliable data source - sadly no longer!!!!!