BACK TO ALL NEWS
Currently reading: Aston Martin previews Son of Valkyrie hypercar for Geneva reveal
UP NEXT
Ford to revive more historic model names for new cars

Aston Martin is soon to reveal the new 'son of Valkyrie' hybrid hypercar, and has released the first official image of the new model.

Although a Geneva motor show debut is yet to be officially confirmed, the release of the image is indicative of an expected unveiling at the show next month.

It will be the third hypercar to emerge from the British car maker after the Valkyrie and Valkyrie AMR Pro. Codenamed ‘Project 003', the mid-engined model is part of a joint development project between Aston and Red Bull Advanced Technologies, and is due to be released in 2021.

Said to be built around a lightweight structure, the Project 003 will be powered by a turbocharged petrol-electric hybrid powertrain of undisclosed size and power output. Aston is claiming an “exceptional breadth of performance”, but the car has also been designed to be usable and practical for road use, with space for luggage.

The Project 003, like the Valkyrie, will feature active aerodynamics for “outstanding levels of downforce in a road-legal car”. Active suspension, likely inboard and pushrod-operated, will again be used for the new car, which is pitched as a model that could eclipse the LaFerrari and McLaren P1. 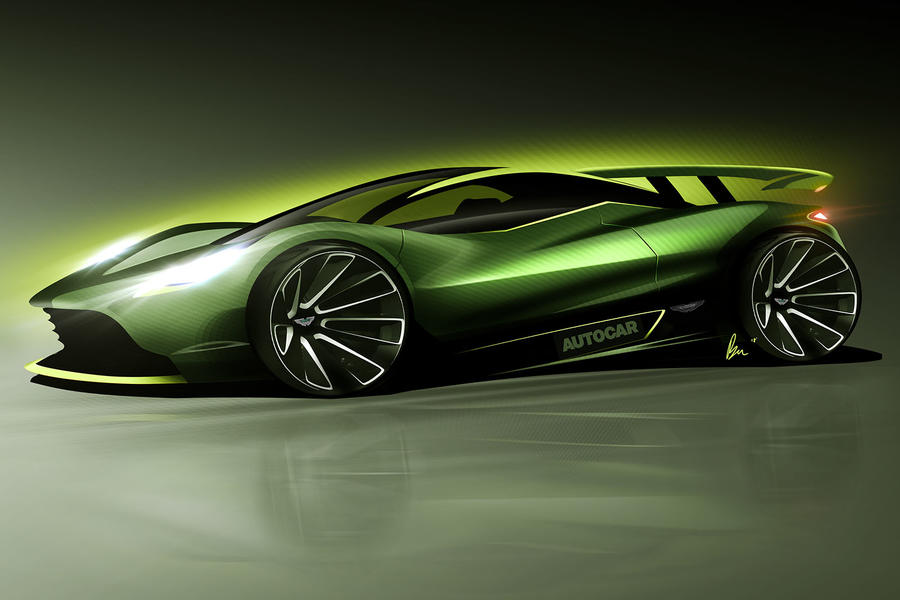 Aston Martin has confirmed it will be homologated in left- and right-hand drive form, with production limited to 500 examples globally. No price has been hinted at, but Autocar expects it to cost around £1 million. The first customer cars will be delivered towards the end of 2021.

Before road-legal production models are released, however, the 'son of Valkyrie' will race for outright victory at Le Mans in 2020, according to CEO Andy Palmer. The debut fits in with regulation changes to put road-derived and concept hybrid cars in the top category, meaning the new car could race against models such as the McLaren Senna.

Known as the 'son of Valkyrie' by its development team, it has been given the internal development goal of establishing a new benchmark for hypercars in the £1m price bracket in around 2021, ahead of any of the established players re-entering the market.

Both the LaFerrari and P1 were launched in 2013 and, while production of both has ceased, such halo cars are typically replaced at extended intervals. The gap between the launch of the Enzo and the LaFerrari was 11 years and, were such a gap repeated, it would mean the Aston-Red Bull car stealing a march on them.

Confirming the project, Aston boss Andy Palmer said: “It’s correct - we have more than one mid-engined project underway - more than two, if you count the Valkyrie. This new project will draw on all the know-how we’ve taken from the Valkyrie, as well as some of its visual identity and engineering capability, and bring it to a new sector of the market.”

As the 'son of Valkyrie' name suggests, the opportunity to develop another ultra high-performance car with Red Bull has been made possible by the success of Aston’s initial collaboration with the F1 team, led by Adrian Newey. While it is loosely termed a hypercar, Valkyrie’s performance will be far in excess of any production car previously sold, putting it in a different league to the likes of the LaFerrari and P1 and even - its makers insist - newer special editions such as the Senna and potentially the Senna GTR.

There has been huge demand for the limited-edition Valkyrie and its track-only AMR spin-off - both of which are sell-outs despite price tags ranging from £2m-£3m, and despite the first cars not reaching customers until 2019. Consequently, Aston Martin has extended its co-operation with the Red Bull F1 team to launch this new car project.

It is not clear how much the 'son of Valkyrie' and Aston’s upcoming, more mainstream 488-rival - set to launch in 2021 - will share in common beyond their basic layout, but it is expected that the former will launch as a halo product to showcase Aston’s skills in the mid-engined supercar market. Consequently, the 'son of Valkyrie' will likely be sold in extremely limited numbers, in order to add to its desirability: 499 LaFerrari’s were made, with 210 open-top LaAperta models later added to the run.

The car’s development also underlines why long-time McLaren development driver Chris Goodwin switched camps at the end of last year, with the specific brief to hone Valkyrie now becoming a much longer-term role that puts him at the heart of the Aston and Red Bull tie-up. Both projects also raise the prospect of taking him back into frontline racing, including a potential Le Mans project if he so chooses.

The creation of the 'son of Valkyrie' also raises the prospects of Aston Martin and Red Bull working together long term on numerous road car projects. Palmer revealed to Autocar that as part of the arrangement for the current project he has set up a campus at Red Bull’s Milton Keynes facility for around 130 staff to work full-time.

“We are laying down some pretty deep roots with Red Bull,” said Palmer. “It is a base that will be known as our Performance Design and Engineering Centre and that gives the perfect clue as to the kind of projects that will be developed there. Perhaps the biggest indications of our intentions is that our office is next door to Adrian’s.”

Aston has already recruited heavily in preparation for launching its 488 rival. Development is being set up by Max Szwaj, who joined Aston from Ferrari as chief technical officer, and Palmer said that the car was being developed with an eye very firmly on the latest offering from Maranello.

“There are arguments that the McLaren 720S is the better car to drive, but we are aiming at the Ferrari because it strikes us as the most desirable package,” said Palmer. “The Ferrari has incredible dynamics and jaw-dropping looks - it has everything, and that has to be our goal, especially with our mantra that every Aston must be the most desirable in its class.

“That’s a challenge to Marek [Reichmann, head of design] and Max and their teams, of course - but they all have the track records in producing visual drama, handling and performance. They are two inspirational leaders, and they have built dream teams around themselves to deliver what we want, recruiting from Alfa, Ferrari and Maserati to ensure the chassis, engine and shape of the car are the best there are."

Palmer has also previously revealed to Autocar that the 488 rival will have an all-new powertrain, but he remains cagey on specifics. The price differential to the 'brother of Valkyrie' means that it may not employ hybrid technology, or use as bespoke a powerplant, although McLaren has shown that such a strategy can be possible. “In our portfolio today, we don’t have an engine capable of giving us the output we require,” he told Autocar. “Whether through collaboration with AMG or whether by ourselves, we have to find an answer.”

The 488 rival will be built in Gaydon alongside the DB11, the Vantage and the Vanquish, which is to move into true front-engined supercar territory. Also planned is the DBX SUV for 2019, to be built at Aston’s new factory in St Athan, Wales, and two Lagonda models; a saloon is likely first, in 2020, followed by an SUV in 2022.

Such is Aston’s rate of growth that it currently has around 400 job vacancies open, mostly in engineering. Palmer confirmed that part of the appeal of spreading the firm’s base to Milton Keynes and St Athan was that it was no longer vying with neighbour Jaguar Land Rover to attract talent. “We’re enjoying incredible growth, but we have to be innovative in attracting the talent to do that,” he said. “But the key point is that Aston is getting more desirable by the day - we are proving to everyone that we are a serious player.”

AMG 53 drivetrain?  NO!  That would just continue the very sad dilution of Aston Martin and accelerate its being reduced to a company that no longer makes its own engines. Yes, that's expensive, but Aston IMO cannot compete with Ferrari if it buys engines from someone else. I bought a previous generation Vantage new, and love it. I have ZERO interest in the new car because it doesn't have an Aston engine (nor am I a fan of its looks, but that's another matter). How good that engine is matters not at all -- an off-the-shelf someone-else's engine is an absolute deal-breaker. The engine is the beating heart of the car, and an Aston can't have an AMG heart. Would a Ferrari with a Benz engine be a Ferrari? Clearly not.

I'm not a fan of the mid-engine 488 competitor either. To me, Astons are front-engined. That's one of the things that makes them what they are. Nothing against mid-engines cars -- they're great -- but we have Ferrari, McLaren, Lotus, etc. for that. Extreme stuff like the Valkyrie (or Bulldog) is a different matter -- they have their own specific purpose and can be anything.

Surprise, I'm not a fan of the DBX either. This is the perfect opportunity to relaunch Lagonda -- enter the potentially lucrative SUV market, relaunch the marque and leave Aston unsullied by making an SUV. A crying shame of a missed opportunity on many levels.

This whole make Aston a "global luxury brand" thing is worrisome, and sounds to me like the antithesis of what made Aston Martin special and endearing. I'm not suggesting they go back to making 45 cars a year by hand. No growth can kill a company, but too much growth -- or attempts at that -- can be just as lethal.

Not sure making their own powertrains is viable for a company of Aston’s size long term, even Rolls-Royce uses BMW engines these days and nobody minds. The Bugatti is two VW W8’s and a load of turbos! Making your own engine in a company Aston’s size is a huge undertaking fraught with risk - see TVR for details - even McLaren outsource engine development and production to Ricardo.

The AMG V8 in the Vantage and DB11 has been very well reviewed and is likely to prove reliable which is critical for residuals, and a straight six has loads of historical resonance for AM, all the way from the early days through to DB7 which was in itself a modified Jaguar engine, the same as the modified Jag AJ-V8 in your car is - and apparently you didn’t even notice!

Agree Lagonda should do the SUVs and saloons, leaving the sports cars to Aston though.

You can foretell the economy...

...by the number of hypercars being announced each week - usually means a recession is just round the corner. How much smarter would it be to skate to where the puck is going and drop the hybrid straight 6 (AMG 53) drivetrain into the Vantage to reclaim the market they used to have with the previous (£85k/400bhp) model. It was very much the best option at that price point for anyone who didn’t want a default 911. Seems nuts to cede that market to Porsche entirely.

This won’t actually compete at Le Mans 2020, with the change of the WEC season meaning the seasons will from now on end with Le Mans (hence the current “super season”)  that means this will compete in the WEC season of 2020/2021, but with the actual Le Mans race being 2021.

the 2020 running of Le Mans will stil be based around the LMP1 regulations.

That’s as I understand it in anycase.