New exclusive pictures of the McLaren Senna show the 789bhp track-focused hypercar on the move in closer detail than before.

The model, which made a surprise dynamic debut during the launch of the new McLaren Composite Technology Centre in Sheffield earlier this month, arrives five years on from McLaren's rule-breaking P1 hypercar and is being tested on the open road before its final settings are signed off.

The Senna is the second member of McLaren's range-topping Ultimate Series, an “ultimate road-legal track car”, and gets the name of the grand prix team’s greatest champion, Ayrton Senna. 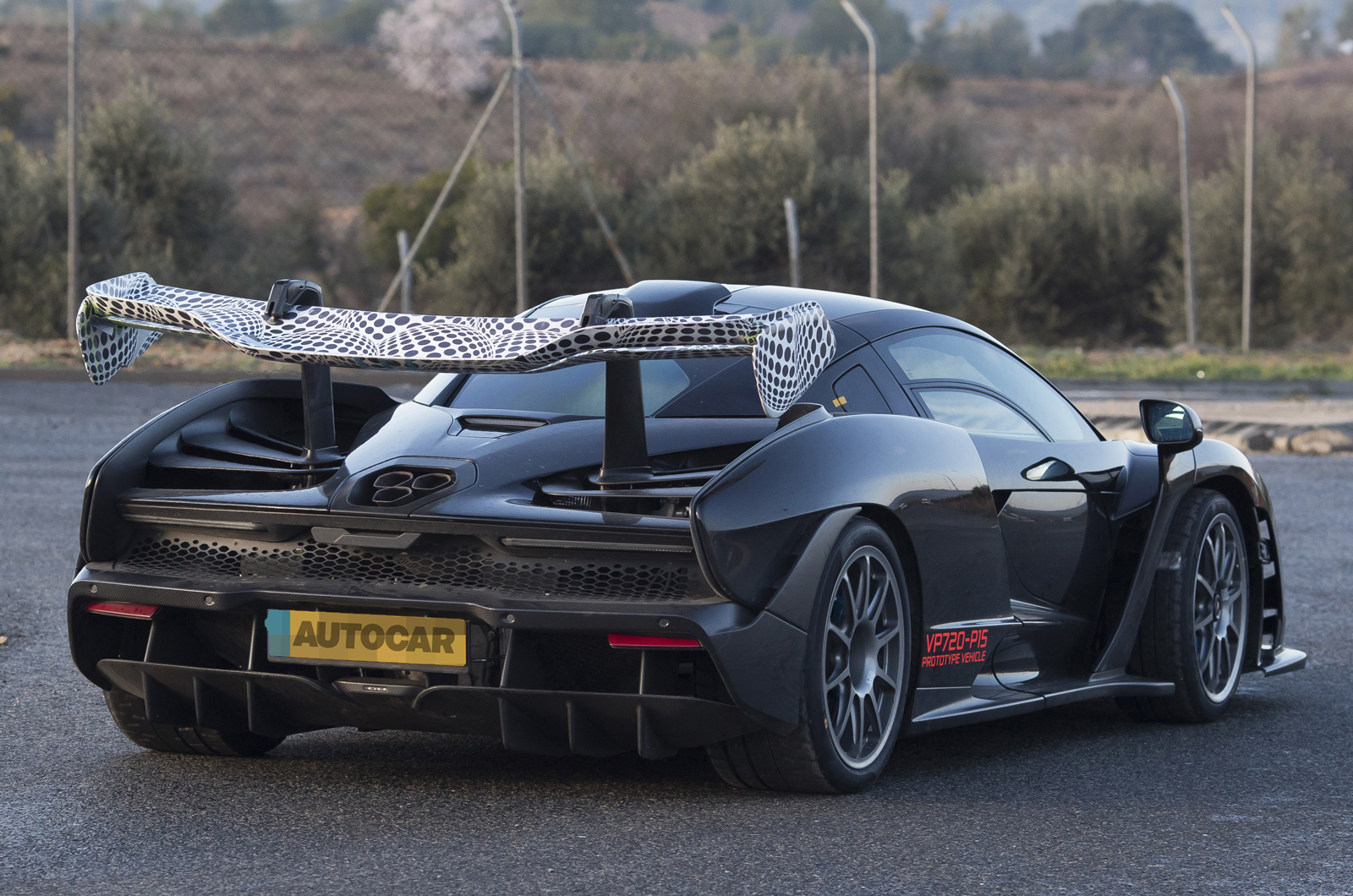 Revealed at an exclusive launch in London in January, the £750,000 McLaren Senna is the first model from Woking to have styling described by its creators as “brutal” and “unforgiving”.

The result is a car with the unprecedentedly low dry weight of 1198kg (undercutting the already light 720S by 220kg). Throw in a 9% power hike for the 4.0-litre engine and the Senna has an eyewatering power-to-weight ratio of 660bhp per tonne. It is not surprising that the factory claims it’ll turn in the quickest lap times of any production McLaren yet.

McLaren has just confirmed the car's straight-line performance figures - you can get a full rundown of them here - but the key ones are this: 0-62mph in 2.8sec and a top speed of 211mph.

Palmer is at pains to point out that, despite the spectacular performance, the Senna is not a direct P1 successor. 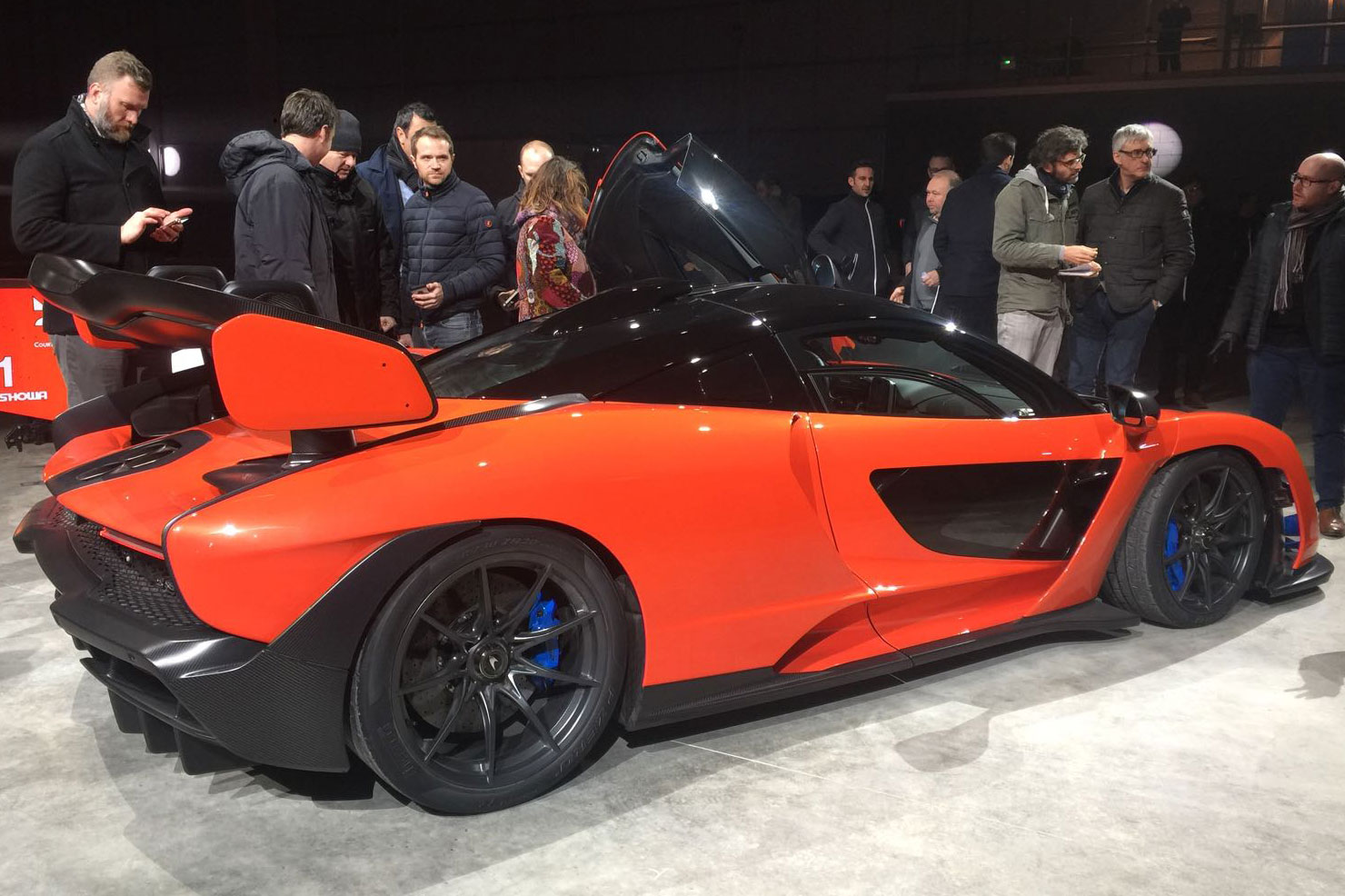 Unlike other McLarens, which claim a breadth of capability, the Senna focuses squarely on lap times, offering “the purest connection yet between driver and car of any road-legal McLaren”. Besides, whereas the P1 was a hybrid (as half of McLaren’s production cars will be by 2022), the Senna is a solely fossil-fuelled car whose lack of electrification is one reason for its amazingly low weight.

Day-to-day practicality also goes onto the back burner in the Senna. A 720S has decent luggage space and cabin storage, for instance, but this track-day special has deliberately very little. A new roll-over structure behind the driver leaves room, according to Palmer, for only “two helmets, two driving suits and possibly a packet of sandwiches”.

The use of the Senna name is underpinned by the continuing presence at Woking of Bruno Senna, Ayrton’s nephew and a former Formula 1 racer in his own right, as a McLaren Automotive driver and ambassador.

“This is the first project that really connects with Ayrton’s racing spirit and performance,” said Senna. “The McLaren Senna honours my uncle because it is so utterly dedicated to allowing its drivers to be the best they can possibly be.” 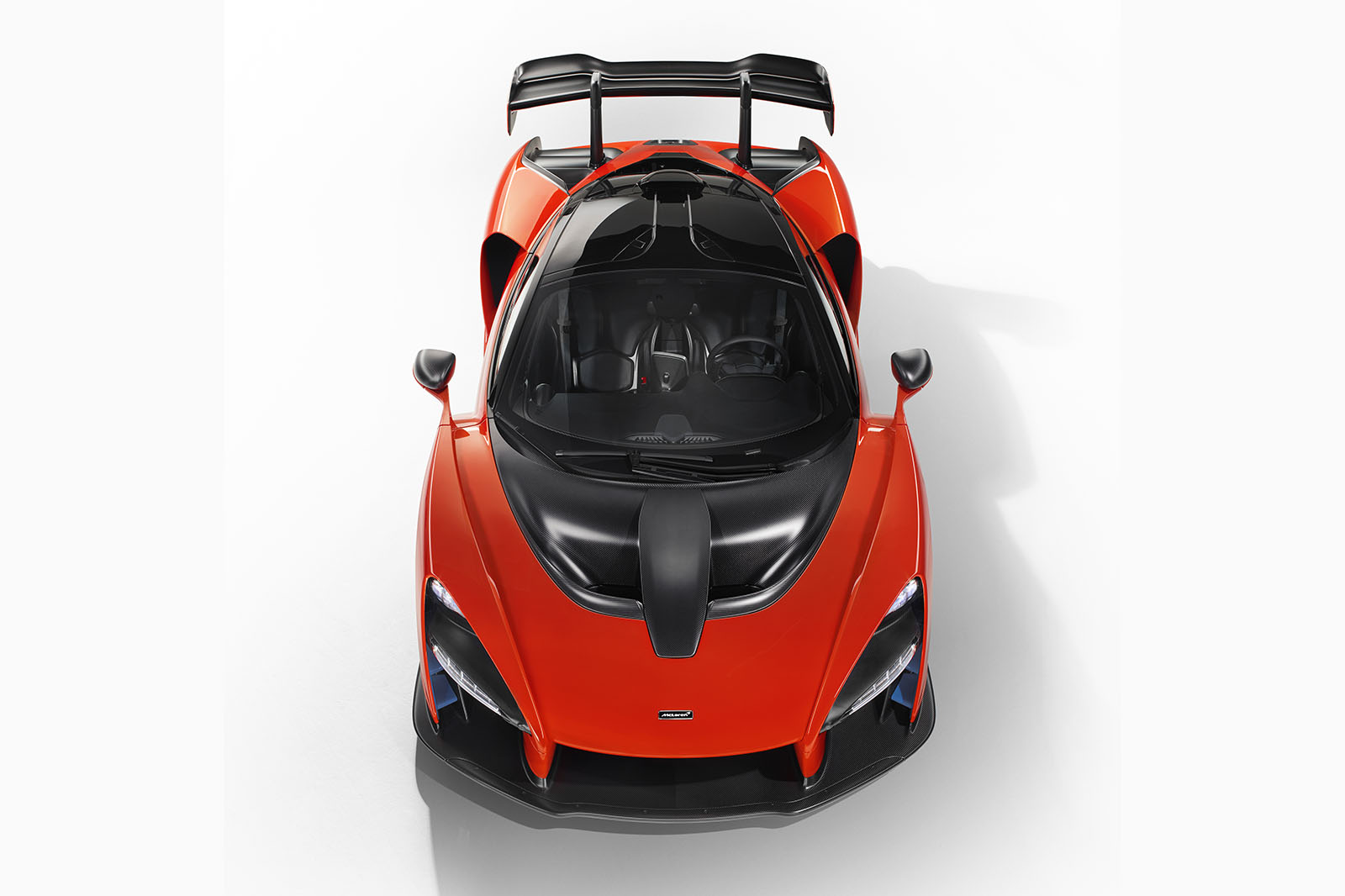 The Senna’s core component is a developed version of the 720S’s carbonfibre chassis, now called Monocage III and claimed to be the strongest chassis yet used in a McLaren road car. It still has an aluminium front subframe to carry the car’s front suspension and deformable crash structure, but the rear bulkhead is now formed mostly in carbon fibre, a measure that saves an impressive 18kg.

There is weight saving all over the car as a result of fanatical attention to detail, including reductions in weighty equipment of a kind the keenest drivers don’t need and improvements in technology – such as a patented new-spec carbon fibre recipe that cuts the weight of the Senna’s front wing from 2.2kg to just 650g, with no significant loss of durability.

The engine sits in the new, lowered position of the 720S, but a redesign of its plenum chamber allows a lowering of the rear deck by another 18mm and saves more weight.

There are no switches on the Senna’s doors, which are similar in size to a 720S’s but have only half-sized lowering glass panes (which both reduce complication and allude usefully to the McLaren F1). In their lightest form, the doors weigh just 8.8kg, less than half those of a 720S. 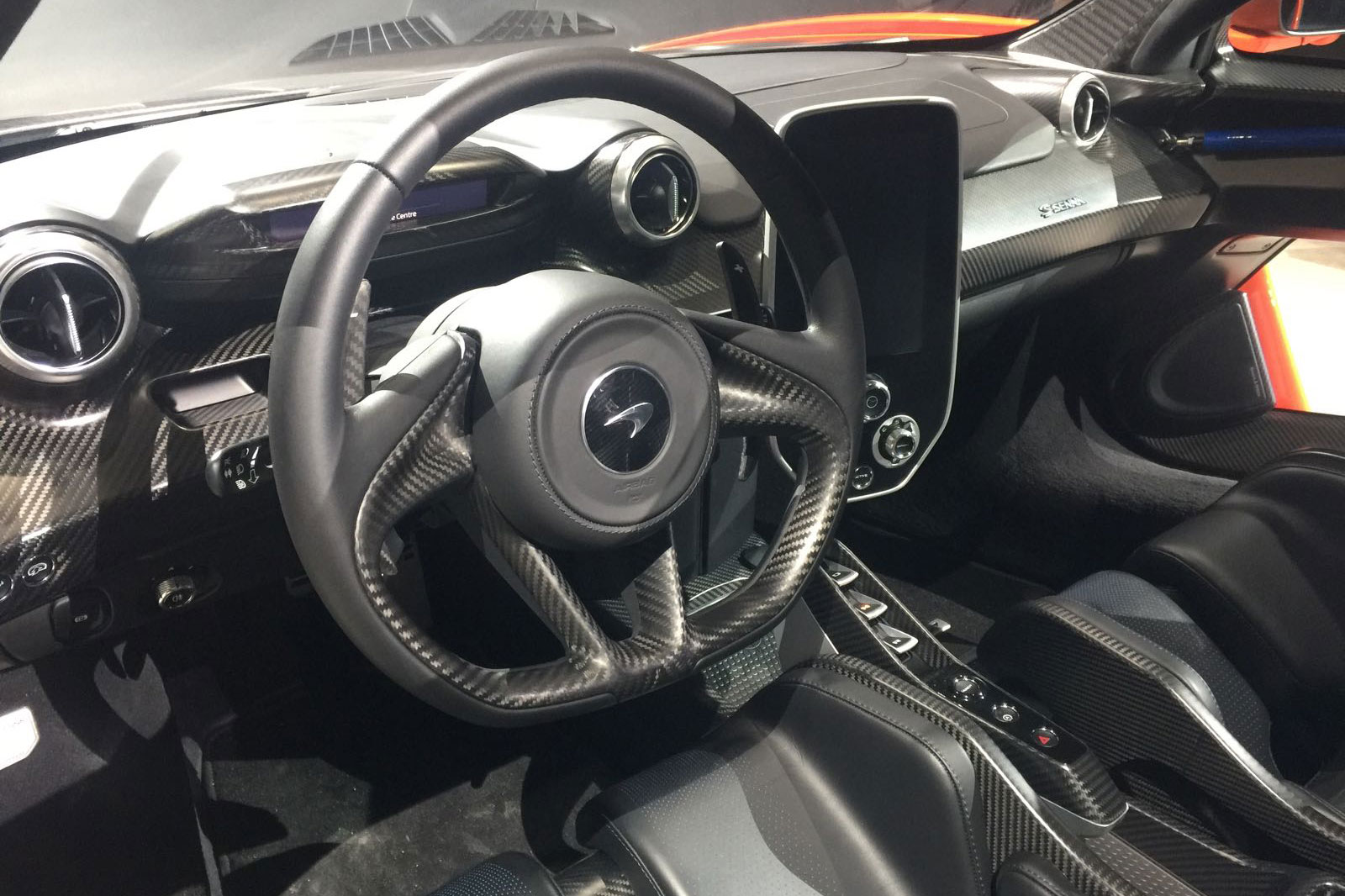 Active aerodynamic addenda dominate the Senna and McLaren engineers claim “groundbreaking” downforce and stability for their carefully coordinated package. There’s a very prominent pylonmounted rear wing that adjusts around 20deg, according to driving mode, providing high-speed downforce, braking drag and a “DRS mode” for when the car is going fast in a straight line.

Smaller but extremely efficient blades in the front air scoops, just above the front splitter, move automatically to balance aero downforce, front to rear, including when the car is cornering.

On the rear deck, prominent Gurney flaps ahead of a line of louvres create a low-pressure area that draws hot air from the radiators and engine bay. An exotic looking four-outlet ‘slash-cut’ exhaust is carefully positioned on the car’s sloping rear deck, below the rear wing but above the diffuser to cause minimum interference.

The Senna also has ultralight seats and many ancillary controls are now grouped in a roof console between the occupants. The interior, painstakingly simplified and shorn of excessive weight, is unashamedly designed entirely to suit the driver (who can be fitted precisely to a new car at the factory). For a while, McLaren even considered leaving out the passenger’s seat as a weight-saving measure but decided many owners would prefer to drive on the track with a passenger. 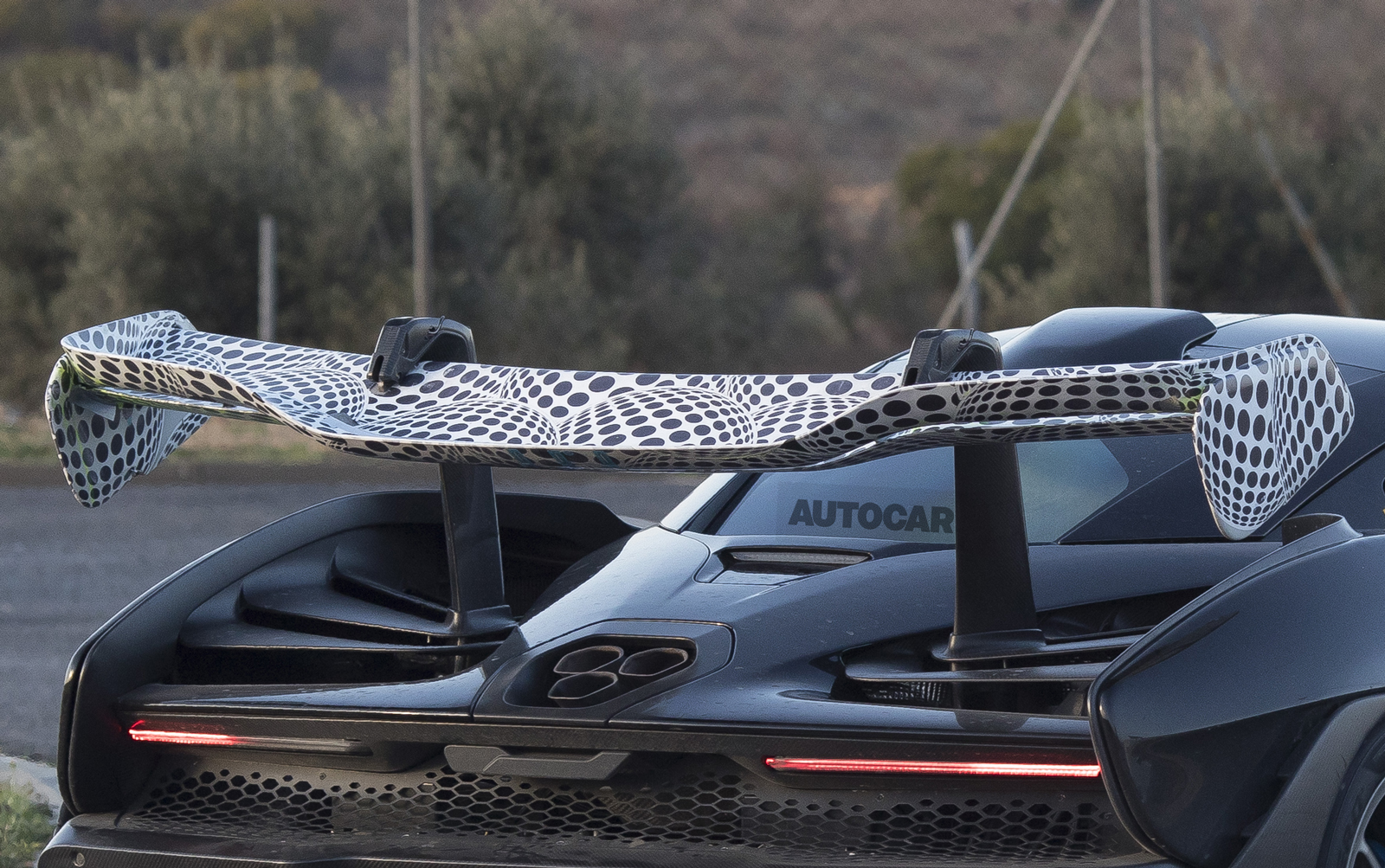 The suspension is a developed version of the P1’s all-independent, doublewishbone layout, with specially tuned dampers that are hydraulically interconnected (both front-to-rear and side-to-side), plus another hydraulic system that functions as an anti-roll bar. The entire set-up is governed by an electronic gizmo called RaceActive Chassis Control II (RCC II) that incorporates an automatic stiffness control called K-damper. The whole lot will adapt automatically to road conditions but can also be configured manually (along with engine and gearbox behaviour) from an Active Dynamics Panel on the centre console that offers Comfort, Sport and Track modes. A Race mode can be selected via the overhead panel.

This hardest-edged road McLaren yet will make its public debut at the Geneva motor show in March and enter production next summer. The first cars from the hand-built batch of 500 will reach their owners before the end of 2018. If you don’t have a confirmed order, says McLaren, you’re already too late. The last car in the production run was auctioned at an event for customers, where the car was revealed in the metal. It sold for £2m with the money raised donated to the Senna Foundation. This last car will reach its owner within a year.

Should speed be king for the McLaren P15?

Who cares how fast it is?

Who cares how fast it is? They're all fast.

But when a car is this hideous, it needs to be fast so you can get away from all the people laughing at you for buying it.

Senna?  Ron Dennis said the Bugatti Veyron was "pig ugly", right? This one is worse. Looking forward to see it action at the NBR or whatever. I suppose it's bound to be fast.

Have they looked at the Rondeau M379C?

Not the best looking Car ever, but I guess there are enough well heeled money rich car collectors out there because all are spoken for already before they are even built, and what does it matter if they are track only?, call them development Cars like Ferrari did with there FXX.