Aston Martin is setting up its new SUV and electric car plant in Wales with a production line running at twice the speed of its Gaydon HQ factory, as it searches for greater manufacturing efficiency.

Workers at the new St Athan plant will have half the time to fit components compared with those at Gaydon, where the Vantage, Rapide, DB11 and DBS Superleggera are built. The assembly stations at St Athan are planned around a 20-minute ‘Takt’ time – the industry standard for organising production lines – compared with Gaydon’s 39 minutes.

“St Athan will be more efficient because it’s a new plant being set up with the benefit of 15 years of experience of operations at Gaydon," said Aston Martin.

Aston Martin DBX shown in near production form before 2019 reveal

The Welsh plant will make 7000 cars per year, the same number as Gaydon but on one instead of two lines. St Athan consists of three converted RAF hangars – the first a body-in-white plant, the second a paint shop and the third a final assembly hall.

The factory will launch pilot production of the new DBX SUV next spring, with a series of models known internally as PT2 (for Production Trial 2). Spearheading the electric push at Aston Martin, the Rapide E will also be produced at the site in 2019, when doors officially open. In 2021, the Lagonda luxury brand's first car will enter production, as part of an all-EV line-up of Rolls-Royce rivals. 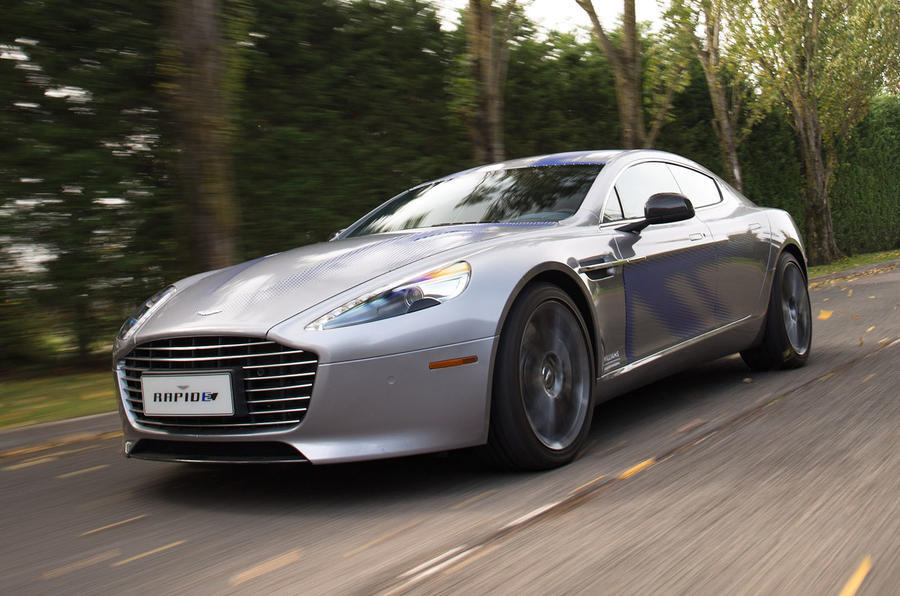 Based on the Rapide four-door and powered by an 800V, 65kWh battery pack and two rear-mounted motors with a total of 602bhp, the Rapide E will be built in a former warplane paint facility on the St Athan site. Once the limited run is complete, the unit will be converted to a pilot production plant where Aston engineers can trial new production methods for future models.

The plant's construction is now in its third and final phase, with the production lines on the way to completion, laying the groundwork for the manufacturer to launch its new DBX crossover in 2019. Although not every car produced at St Athan will be electrified, the brand aims for every car in its line-up to have an electrified option by the mid 2020s.

Entering the world's fastest growing segment, the DBX has massive potential to expand Aston Martin's sales and enable it to tap into new markets. It will be the first of Aston Martin’s seven planned new models, which are being developed to build on the British firm's recent sales success that hit a nine-year high in 2017.

As such, the St Athan site will play a significant role in growing Aston Martin production numbers. It will also be a key location in developing Aston Martin's electric and hybrid models, the first of which, the Rapide E, is also due in 2019. 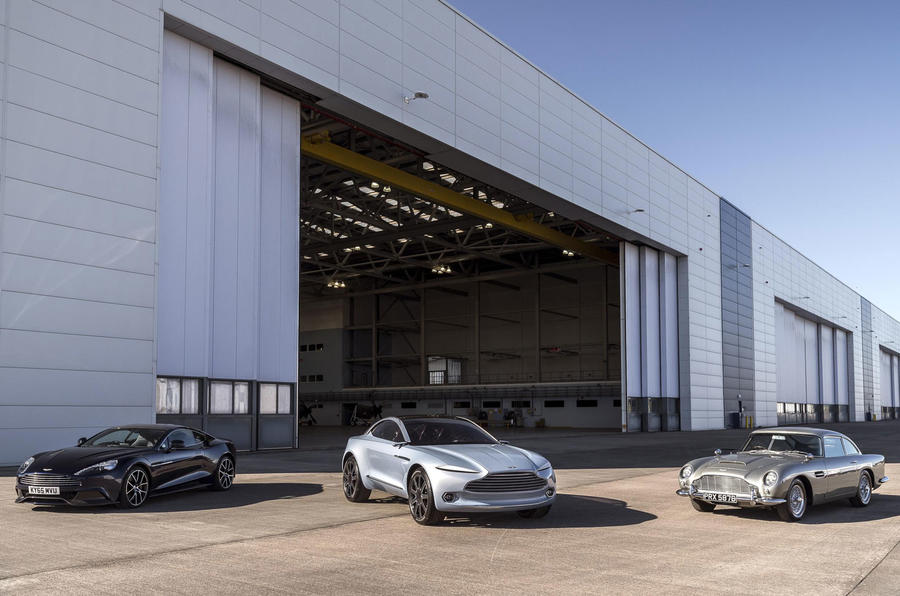 St Athan will employ 700 workers, who were selected from 3000 applicants at a recruitment event in 2016. The existing workforce at St Athan is set to double in size from early-2019, when the newly-commissioned production line will begin to roll out prototypes of the DBX SUV.

Seventy Welsh employees, having spent two and a half years in training at Aston Martin’s existing facility in Gaydon, will be charged with educating all new employees as production of the company’s new model ramps up. The full workforce is scheduled to be employed by early-2020 as the DBX nears completion. 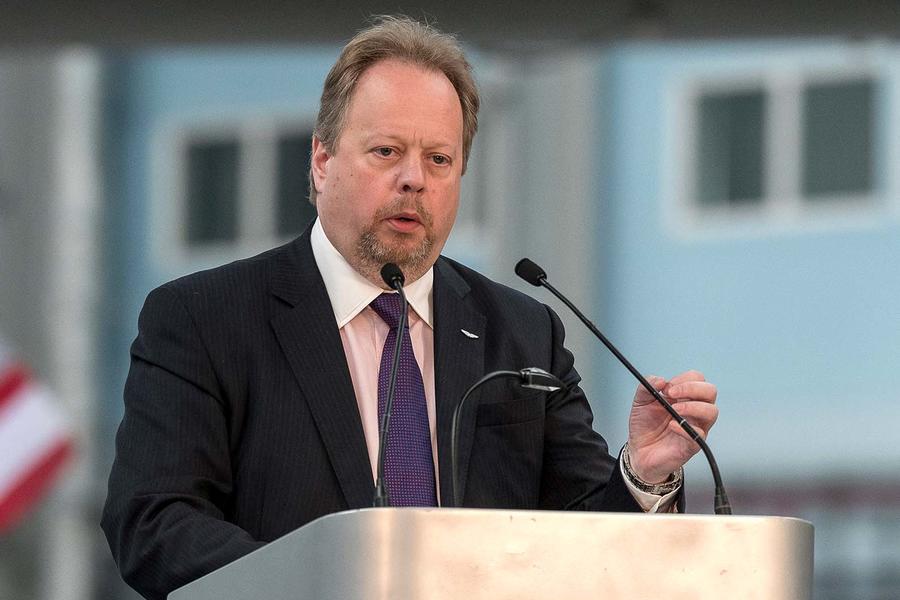 Aston CEO Andy Palmer previously said that there will be some overlap between activities at the company's sites: "If we’re already making components in Gaydon that are needed in St Athan there seems little point tooling up all over again. Likewise, work done in St Athan, particularly in areas such as electrification, will clearly have its applications in Gaydon.

"But, in principle, I like the idea of having two competing plants, particularly as one is in England and the other in Wales. It promotes healthy competition and each will drag the other up."

In August 2017 Aston Martin hired ex-Maserati and Ferrari engine boss Joerg Ross to be its new chief engineer for powertrains - a move which came as part of its push towards electrification. 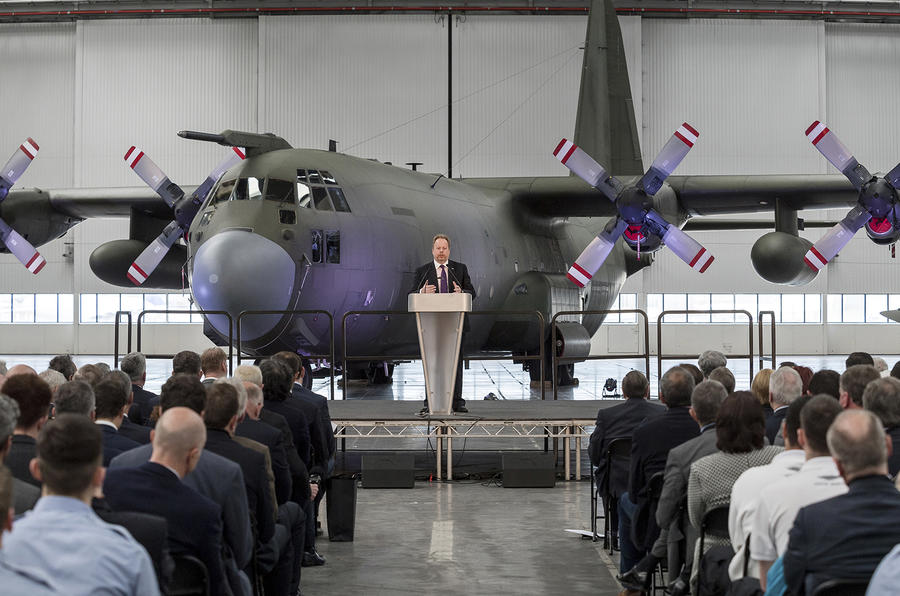 "We will have an engineering centre [at St Athan], it is also likely to be where we do the bulk of our electrification work," said Palmer following Ross's arrival. "Also, we will have our cyber security department here. All the talk these days is of autonomous drive but very few people are talking about how to make sure these cars cannot be hacked, and in many ways that’s a more difficult challenge than autonomy. But until the cars are secure, they cannot be autonomous."

Another 250 jobs are being created at Gaydon. Aston claims that 1000 jobs in total will be created from its current expansion plan.

Palmer said: “Due to its sheer size and scale, the St Athan super hangars represented an excellent opportunity for us to build our second manufacturing facility, within the envelope of an existing structure. It is perhaps fitting that St Athan is, like our headquarters and sports car factory at Gaydon, a former RAF base. We have three hangars; one will handle the body in white, one will be the paint shop and one will look after trim and final assembly."

Aston Martin DBX to be built in Wales

6 April 2017
The report in this weeks magazine about the 7 new Astons said that the production DBX would look a lot different to the prototype. I really hope this is not the case as in my opinion the DBX in prototype form looked a very nice car.

Hate the idea of an Aston SUV

6 April 2017
Hate the idea of an Aston SUV. This is the PERFECT opportunity to keep Aston Martin as a CAR maker, avoiding sullying what it is and what it's about -- there's no Ferrari SUV -- while also allowing the company to enter the lucrative SUV market. Just CALL IT A LAGONDA!!! Or even an Aston Martin Lagonda, if they must. I've heard the Lagonda-isn't-well-known outside the UK argument (I'm in the US), but with good marketing that would not be an issue. Heck, Lexus didn't exist when it was new, and look how marketing made that a huge success. This is the perfect opportunity to re-launch Lagonda and let Aston Martin remain a builder only of sporting CARS.

Would be interested to know whether you have cancelled your Aston Martin purchase on the back of this announcement? SUVs are "on-trend" at the moment and provide the funds to keep the traditional products viable, it would be financial suicide to ignore the whim of the market just to remain pure. The majority of people who bemoan this heretical shift in direction are the very same who are most vocal when the local butcher/greengrocer/post office goes out of business whilst never buying their produce, but the most vociferous when that concern does not keep up with the times and goes bust!

6 April 2017
And the only Lagonda anyone remembers was the fantastic looking and fantastically awful to own 4 door sedan. Let it die.
Sound move for AM. Good luck to them - this is the sort of enterprising spirit Britain needs now.
Robbo

I disagree -- it did Porsche

7 April 2017
I disagree -- it did Porsche a lot of harm. Not to their financial position, but as a marque to respect and aspire to. Yes, I'm a purist. I've had a few Porsches, and I was a big fan of Porsche for decades. I may buy another old Porsche, but I'll probably never buy a new one. It used to be an event to see a Porsche. Now it's just another "premium" car. Let's not forget that the build quality went straight down the toilet when they started building in major volumes. 996 quality vs 993 for example -- no comparison. Cheap plastic everywhere. Engines with major catastrophic problems -- IMS bearings, rear main seals (not catastrophic, but shouldn't happen), cracked and porous bores in 911s and Boxsters. Major bore wear in Cayenne V8s. The GT cars are still interesting, but the others just don't make me want them anymore. A Cayenne is a Q7 and a Touareg underneath. The Macan is a Q5. More platform and engine-sharing is coming. Shame.

I disagree -- it did Porsche a lot of harm. Not to their financial position, but as a marque to respect and aspire to. Yes, I'm a purist. I've had a few Porsches, and I was a big fan of Porsche for decades. I may buy another old Porsche, but I'll probably never buy a new one. It used to be an event to see a Porsche. Now it's just another "premium" car. Let's not forget that the build quality went straight down the toilet when they started building in major volumes. 996 quality vs 993 for example -- no comparison. Cheap plastic everywhere. Engines with major catastrophic problems -- IMS bearings, rear main seals (not catastrophic, but shouldn't happen), cracked and porous bores in 911s and Boxsters. Major bore wear in Cayenne V8s. The GT cars are still interesting, but the others just don't make me want them anymore. A Cayenne is a Q7 and a Touareg underneath. The Macan is a Q5. More platform and engine-sharing is coming. Shame.

I don't agree on the matter of platform sharing, given what everything costs nowadays it makes sense for manufacturers to spread the burden and maximize usage of each design.  Same for engines.

As regards jeeps, however, I'm right with you.  They are a blight on our roads second only to the electric/autonomous fad, but sadly they don't seemed destined to die out so quickly as the electric cars will.  It's especially repugnant to see badges like Lotus, Aston Martin and Volvo stuck onto hideous jeep monstrosities.  They are not only inherently more dangerous than cars, and driven by the worst kinds of driver on top of that, but they are wasteful of valuable resources and environmentally improvident compared to cars.

"Jeeps" are a monstrosity? We live in a democracy that chooses these vehicles whilst they still have free will. Don't like them? Well don't buy them. Various factors will change the vehicles we drive, most notably petty-minded establishment regulation that will drive demand via punitive taxation and ill-concieved legislation. Witness the drive to diesel swiftly followed by the drive against diesel!  Now we have the situation whereby the less well off are driving ten year "smokers" and the more financially capable are running around in tax friendly EVs and PHEVs.

I was going to rant on about how the whole system is geared towards revenue for the establishment as opposed to a government for the people but remembered that this is a site for people who love cars and all things car. Sorry for going off topic

About the wedge Lagonda, it

7 April 2017
About the wedge Lagonda, it was and remains a spectacularly memorable car with massive "Wow factor." Why would you want to let that kind of marketing kudos die when it would be easy to revive? Recognition like that is extremely valuable -- why miss the opportunity?