BACK TO ALL NEWS
Currently reading: Aston Martin Valkyrie could challenge for outright Nurburgring record
UP NEXT
Rodin FZero: V10 weapon aims to be world's fastest car

Aston Martin's Adrian Newey-inspired hypercar, the Valkyrie, is so extreme that it could challenge for the outright Nürbugring record, which was broken last week by Porsche Motorsport's 919 Hybrid Evo racing car. 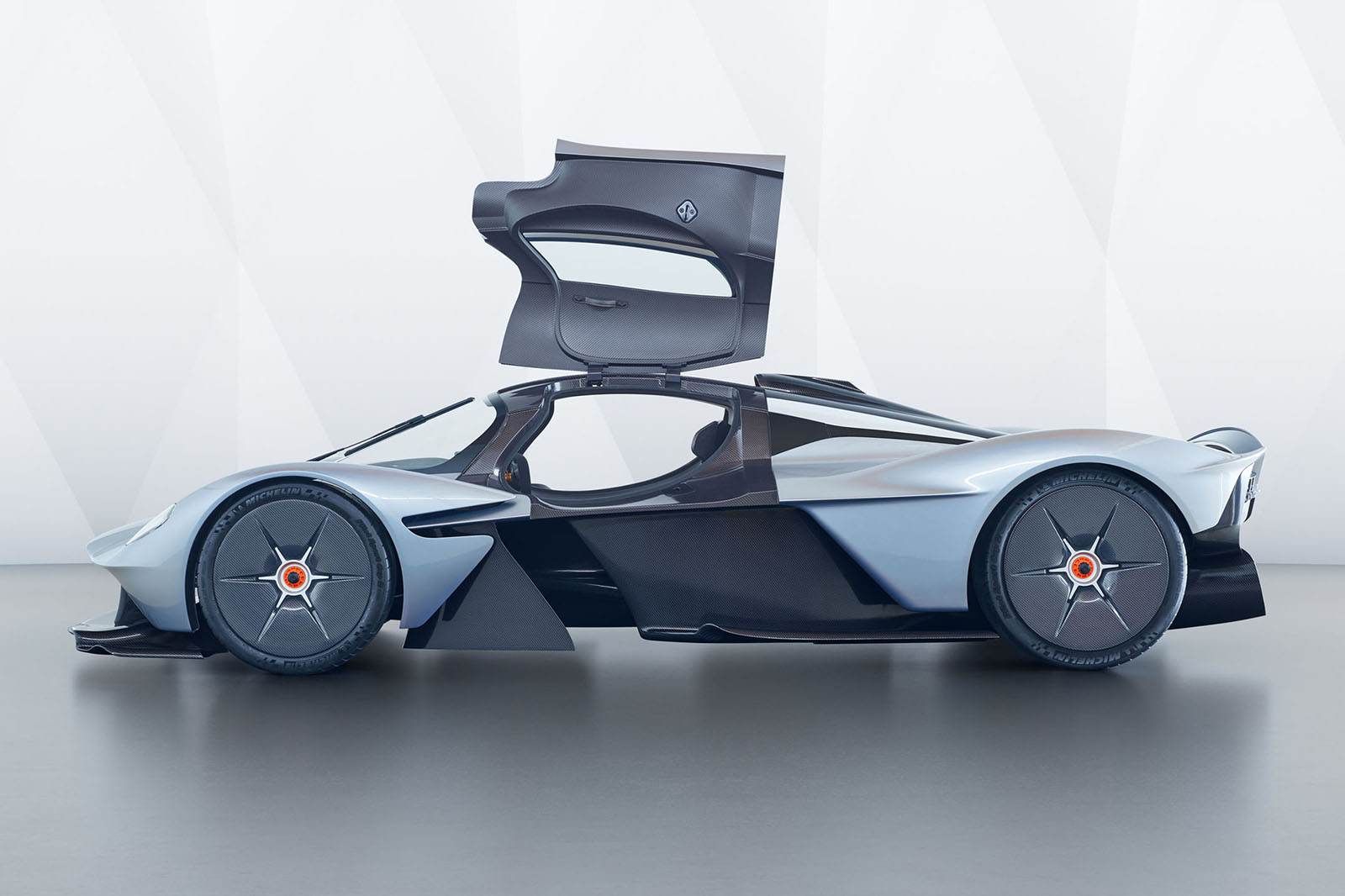 The 919 Hybrid Evo, which has evolved beyond the regulations that restricted it when it competed and won the WEC, clocked a 5min 19.545sec lap around the Green Hell, beating the long-standing 6min 11.3sec record set in 1983 by Stefan Bellof in a Porsche 956 endurance racer.

But the Valkyrie, which will cost from £2.5 million, will use materials and parts that are more advanced than even the cars of motorsport's top single-seater rung, thanks to the lack of regulations and development restrictions affecting it.

No expense has been spared as Aston's designers and engineers, co-developing with Red Bull Racing, seek to make the Valkyrie faster around a lap than exotic alternatives such as the Mercedes-AMG Project One, which, like the Valkyrie, also benefits from F1 powertrain tech.

Designers at Aston’s top-secret design centre at Gaydon completed the Valkyrie's exterior shape earlier this year. It is said to be focused on aerodynamics, with only small tweaks and adjustments made for aesthetic reasons. 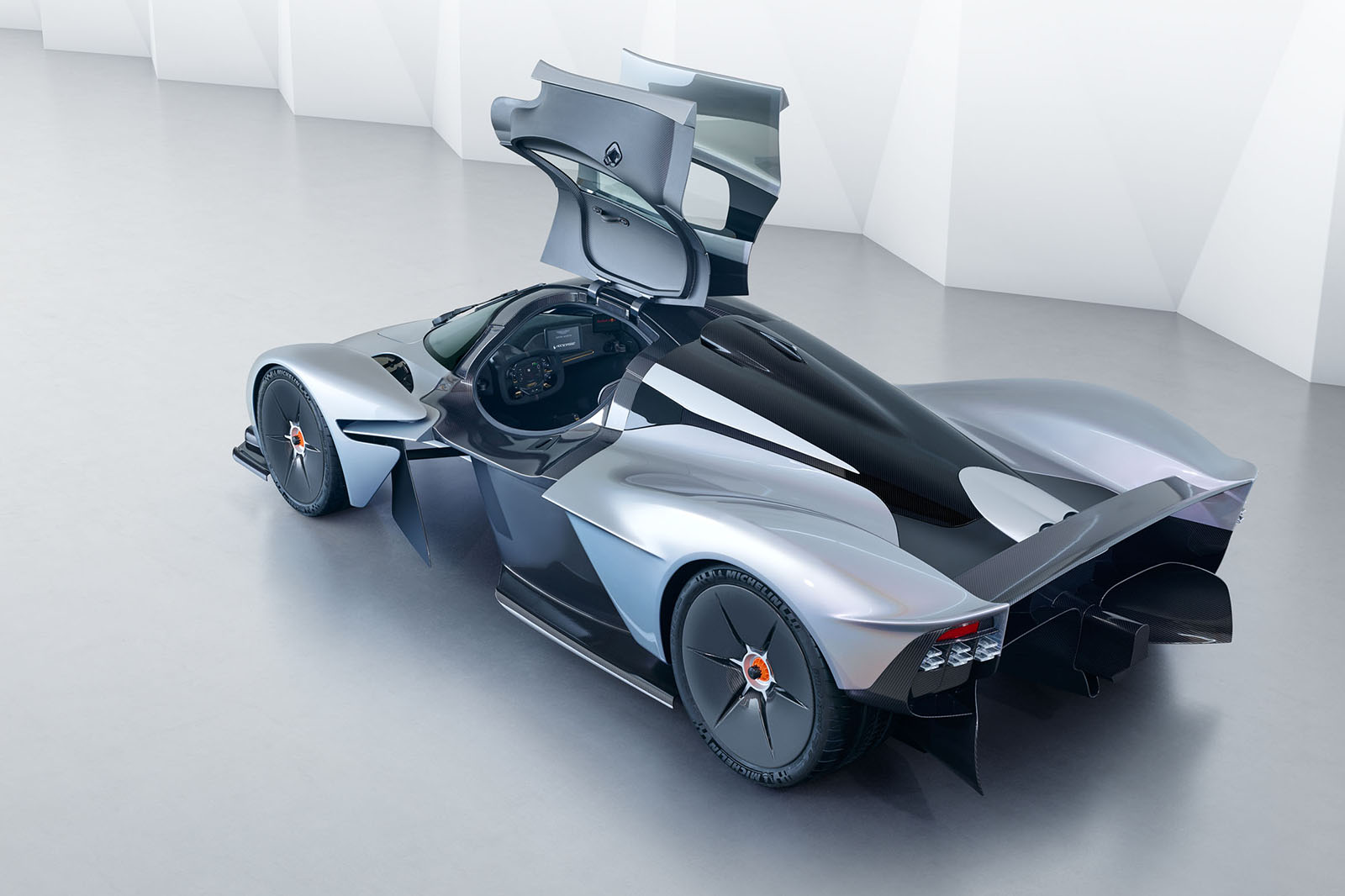 Although the 1000bhp-plus two-seater's proportions have been known for many months, Newey, revered as the world’s greatest creator of F1 cars, has found further ways of increasing its aerodynamic downforce as his colleagues finessed details such as headlights, stoplights, scoops and badges.

"It's been a learning curve for both us and Red Bull Racing," said Libby Meigh, the Aston colour and materials manager for the Valkyrie project and was in attendence at the recent Autocar Awards. "For us, we've learned so much about performance, while Red Bull has had to learn about road laws and safety features."

Opinion: why the Valkyrie feels like the future of Aston Martin

Along with its road legality, the Valkyrie is going to need unprecedented levels of downforce if it is to fulfil Aston boss Andy Palmer's promise that it will “lap Silverstone as fast as an F1 car”. Sources at Gaydon have suggested the Valkyrie will generate up to 4000lb (1816kg) of downforce at top speed. 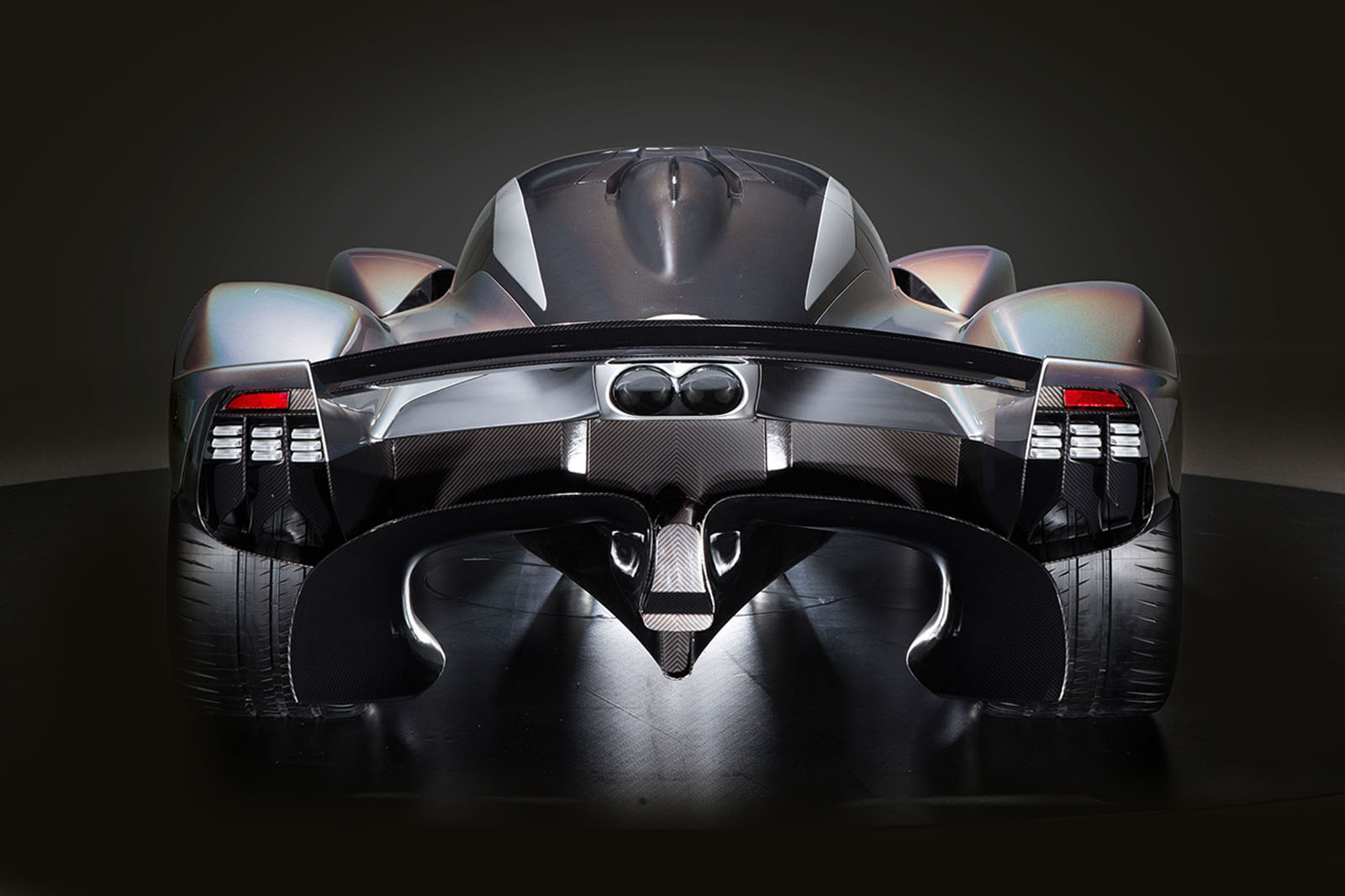 Autocar had exclusive access to a fully detailed, full-sized model of the Valkyrie, shown to a small group of customers at the Monaco Grand Prix last year. The car, pictured here, was used as a demonstrator for prospective owners keen to try the Valkyrie’s F1-style, raised-feet driving position and to begin deciding the specification of their cars. Meigh has met all of them, telling Autocar that buyers' tastes and specifications have varied dramatically.

Flashback: the 1970s version of the Aston Martin Valkyrie

Aston and Red Bull Racing expect to start making the planned run of 150 cars later this year, with a schedule to deliver the first Valkyries to customers during 2019. Jockeying for ownership has begun already; following advertisements purporting to offer Valkyrie build slots for sale, Palmer made clear that Aston would do whatever it could to resist premium market trading.

Aston’s designers and Red Bull Racing’s Newey have made considerable changes since the first iteration of the Valkyrie was unveiled at Aston’s HQ last year. The biggest alteration is a set of new openings between the cockpit and front wheel arches that are designed to increase downforce. Aston’s designers have had the unusual job of incorporating these slots harmoniously into the Valkyrie’s overall styling to ensure aesthetic quality as well as aerodynamic function. 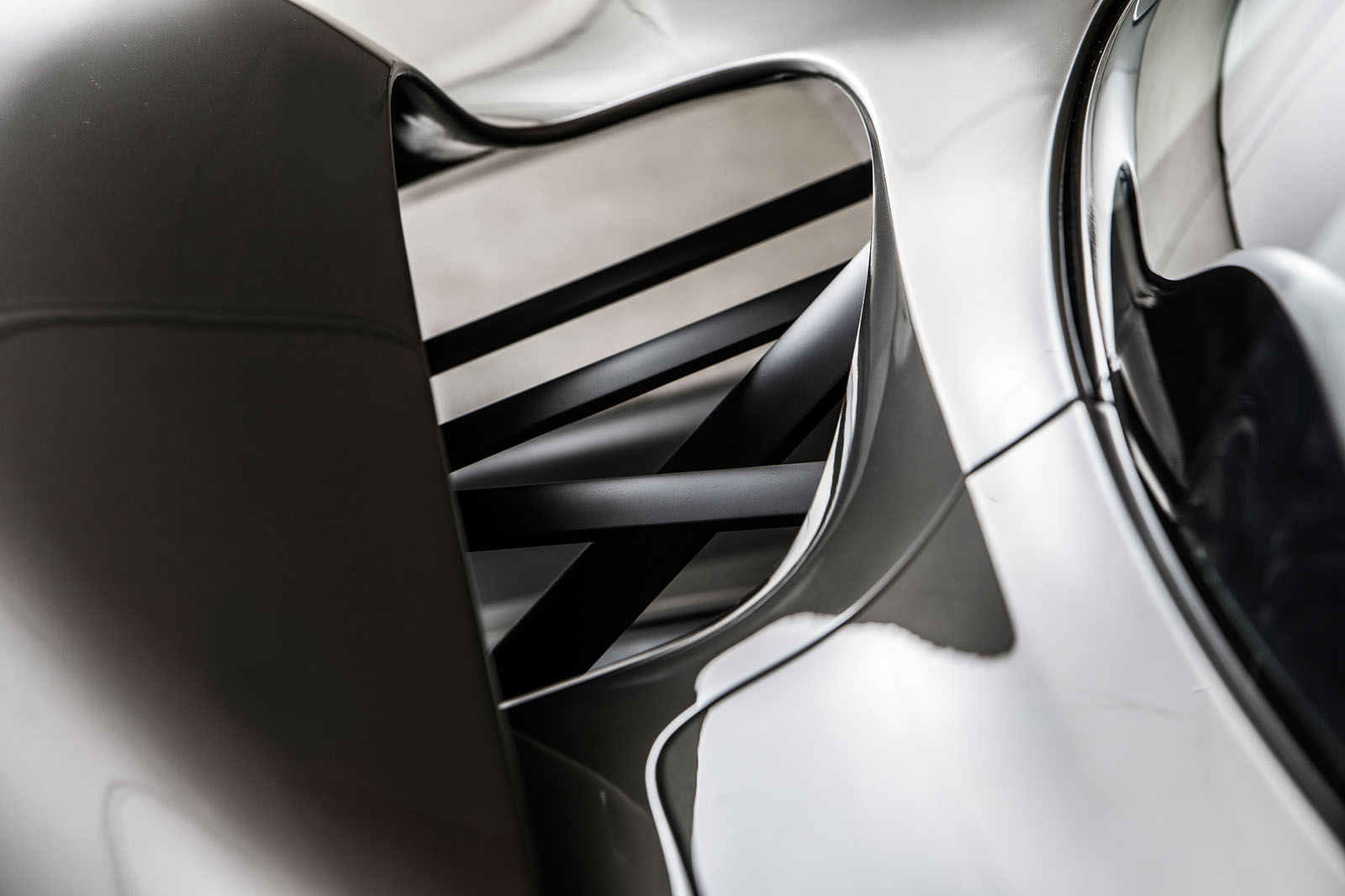 “Much of what you see from outside is the actual structure of the car, which had to be signed off quite early," said chief designer Miles Nurnberger. "Non-structural areas were still subject to evolution as Adrian continued finding improvements.

“Ordinarily, the last thing we’d want is to cut a hole in one of our surfaces, but these new vents work the front wings so much harder that we’ve found a significant gain in front downforce. They have their own functional beauty, but we’ve finessed them without harming the way they work. They also work as windows through which owners can view our fabulous wing-section front wishbones.”

The extent to which the Valkyrie’s main proportions are shaped in the wind tunnel means it makes a complete break from supercars of the past. A low, two-seat, beetlebacked passenger pod with no rear window sits between two large, full-length venturi tunnels. They draw air from beneath the car to feed a very prominent rear diffuser. These tunnels are key to the car’s aero performance, said Aston design boss Marek Reichman, who has worked on this project side by side with Newey.

Despite their aerodynamic obsession, the Valkyrie’s creators are at pains to point out that this car is comfortable and surprisingly spacious, accommodating “a wide range of shapes and sizes”. Occupants must step over the lower aero structure to gain access through a pair of gullwing doors reminiscent of access to a Le Mans racer, but with larger openings. 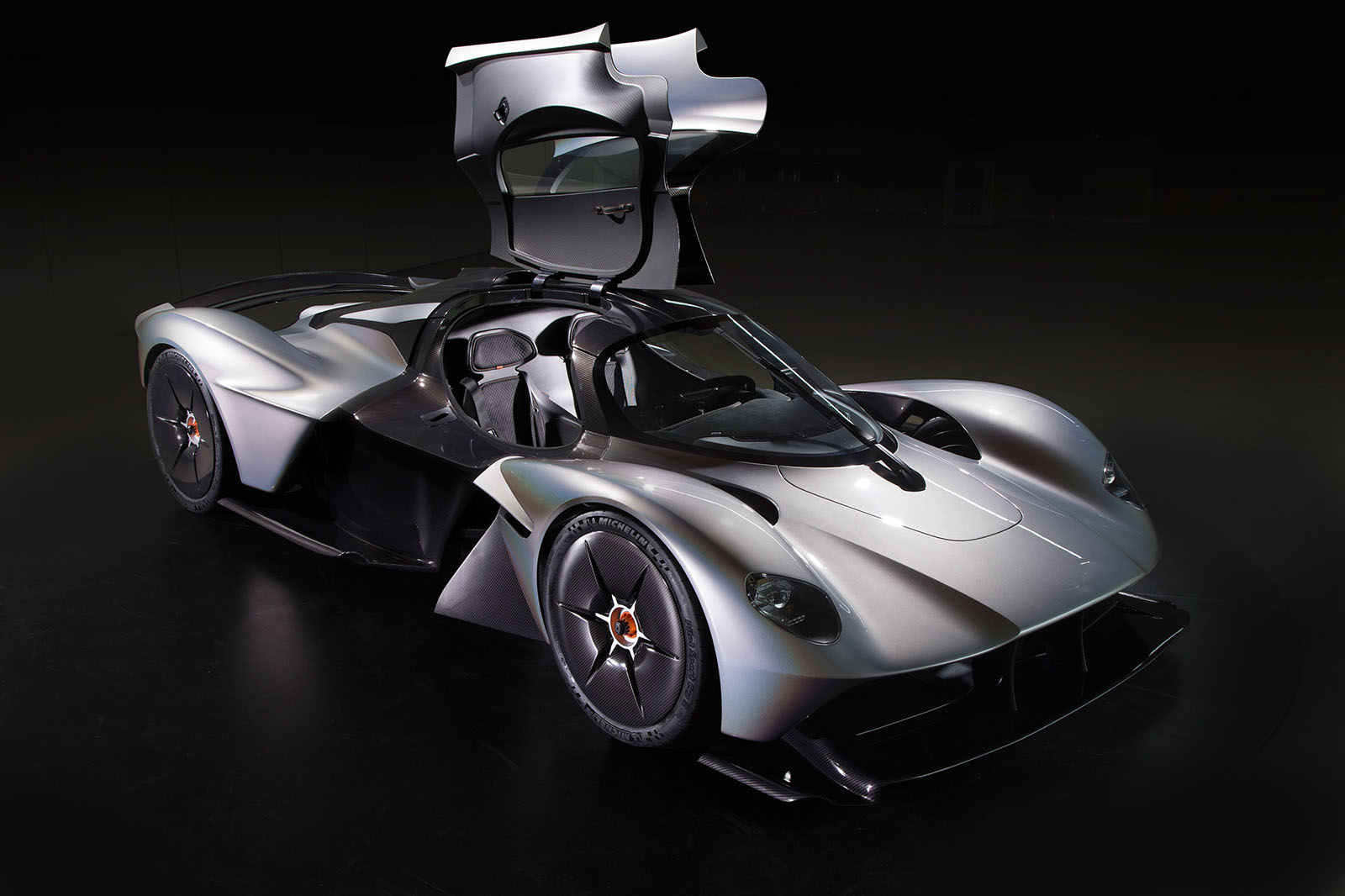 “It has been a tremendous challenge making the interior packaging work,” said Aston designer Matt Hill. “We’ve embraced Red Bull’s F1 ethos and come at things from a different angle. We’ve started from a position that seemed impossible and found a way to make it work, fighting for millimetres everywhere.” The result is comfortable accommodation for two fairly large adults.

“The battle has been worth it,” Hill added. “It has been fantastic watching customers trying the car for size. They love the ritual of getting in and how it feels behind the wheel. They’re genuinely surprised at how the car seems to swallow them.”

Valkyrie owners will be able to have tailored seats made, if they desire, moulded directly to the car’s carbonfibre tub. Aston is pleased with early reactions to the race-style feet-up driving position, which creates a sense of occasion and allows occupants to be reclined further than normal to create head room. A four-point harness is standard.

The Valkyrie’s interior treatment reflects the keenness of Aston’s designers to reduce driver distractions. The traditional exterior mirrors are replaced by rear-facing left and right-hand cameras, whose reduced size also helps cut drag. The lack of a rear window means there’s no need for a central mirror. All important switchgear is on the steering wheel, which is almost rectangular in shape and has a screen on its central boss showing all vital information. There’s a supplementary central screen for minor functions, but ‘minimalist ergonomics’ is one of the design team’s main objectives. 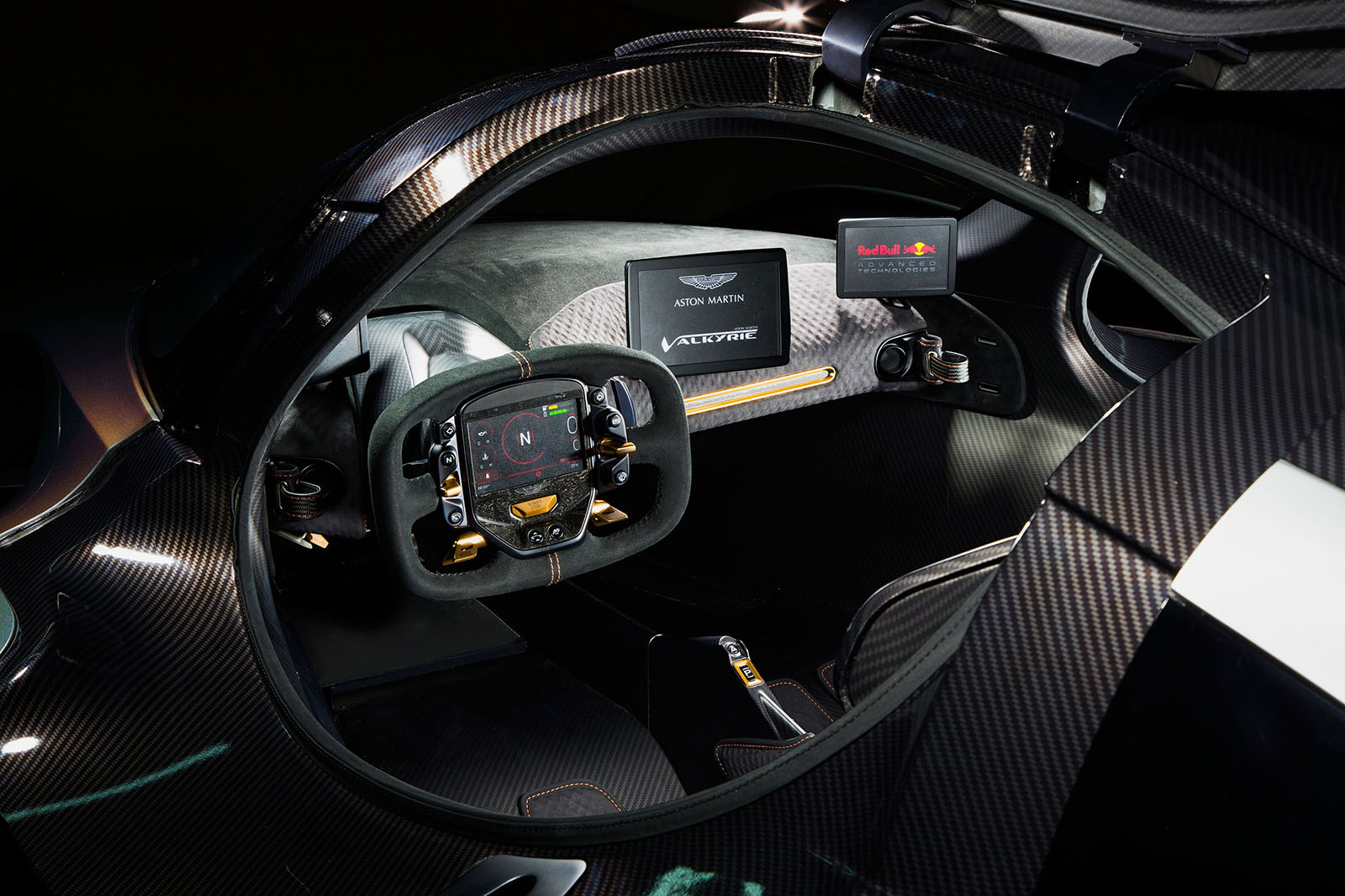 The Valkyrie’s mechanical package has been decided and is proceeding to plan. The mid-engined car uses a normally aspirated 6.5-litre Cosworth V12, tipped to produce more than 900bhp, while the hybrid powertrain (conventional power is augmented by a kinetic energy recovery system) is understood to have delivered 1130bhp during testing. That means Newey’s oft-stated power-to-weight target of one horsepower per kilogram should be comfortably reached, given that the weight is just over 1000kg ready to drive.

The V12’s power reaches the centre-lock magnesium wheels through a seven-speed paddle-operated gearbox made by Ricardo (which also builds Bugatti’s gearboxes and McLaren’s engines). It exhausts through the upper body, Le Mans-style.

Aston says there will be distinct race and roads versions of the Valkyrie, linked by their styling but with “big differences” in weight and aero downforce. Both will use a bespoke central carbonfibre tub built by Multimatic, which also builds the structure for the latest Ford GT.

Little is known of the suspension design so far, except that it uses long, race-style wishbones at both ends. The obvious challenge is to create a system that can withstand huge downforce at top speed yet provide acceptable low-speed, road car comfort. “We want this car to be pure, simple and light,” Newey told Autocar. “It needs to major on comfort as well as performance.” This may be proving Newey’s biggest challenge so far.

Signing off the Valkyrie for production represented “a huge milestone”, according to Palmer, who described managing the expectations of Newey, Reichman and production boss David King last year as the “toughest but best challenge to have”.

Palmer said: “The challenge has been working with three very strong-willed people with three very different agendas. Fighting one corner is Adrian, who wants a no-compromise performance car that sets new technical standards. Then there’s Marek, who is responsible for ensuring every Aston is as beautiful as it can be — something he’s not used to compromising on. And then there’s David, who has to make it, to a schedule, to a budget and so on. He has immovable deadlines that the other two constantly try to push.

“At times, it has been interesting. They have all pushed each other so hard. But it’s challenges like these that get you out of bed in the morning.”

Despite the base car costing around £2.5m, with 150 road and 25 track versions being built, Palmer said the project is unlikely to make money. “We’ll be lucky if this project washes its face, but that’s not why we do it,” he said. “This is the 1977 Aston Martin Vantage V8 all over again — a landmark car that gives you the poster-on-the-wall effect. Kids will fall in love with it. Dads will talk about it. It’s a symbolic car.

“Aston Martin is achieving so much and this is the best symbol of all that. We are getting our confidence back — even some swagger, but never arrogance — and what better way to express that confidence than in the Valkyrie.”

AMG, of all people - what were you thinking?

Another project scuppered by

Another project scuppered by Andy Palmer bluster? What an opportunity to own something designed by an F1 legend, and be able to drive it on the road!

But I bet the design team are pulling their hair out with the boss's circus big top 'roll-up roll-up' posturing about it being as fast around Silverstone as an F1 car. It just isn't, and won't be. What a silly thing to say and I hope it doesn't end up defining the project.

He has form here with the Nissan LMP1 Le Mans project in 2015. How much faster they were going to be than the competition, the tricks they had up their sleeve, what the an advantage the layout would give them over the competition... They got laughed off the track.

Faster than a Hennessy, a Veyron?, handle better than any McLaren Road Car?, come Adrian, put your Car where your reputation is........?!b