BACK TO ALL NEWS
Currently reading: Renault F1 boss: 'We will not be able to hide forever'
UP NEXT
Alfa Romeo to show new sports car in early 2023

Renault F1 boss: 'We will not be able to hide forever'

Cyril Abiteboul knows his under-achieving team must soon deliver. But, as he tells Autocar, he has faith for the future
Open gallery
Close

In a recent television interview, Watford Football Club manager Nigel Pearson said that he wanted to “enjoy” life as a Premier League manager. Those in the studio smiled knowingly. But how can you enjoy a job like that when you’re under such intense scrutiny all of the time? What has sport at the highest level got to do with pleasure?

When we ask the man charged with returning Renault to the front of the Formula 1 grid whether he enjoys his job, he almost breaks into a full smile. Almost. Cyril Abiteboul is warmer than he appears in Drive to Survive, the Netflix documentary series that has boosted his personal profile. But a week before what turned out to be a false start to the 2020 season in Australia, his time is precious. He’s courteous and engages with our questions, but there’s little time for pleasantries.

Abiteboul knows all about the “awful” bit. Recruited by Renault as long ago as 2001, the Frenchman gained a first sour taste of F1 team management when he was headhunted by the small, underfunded and short-lived Caterham (née Lotus) outfit in 2012, then returned from whence he came in mid-2014, not long before it folded. 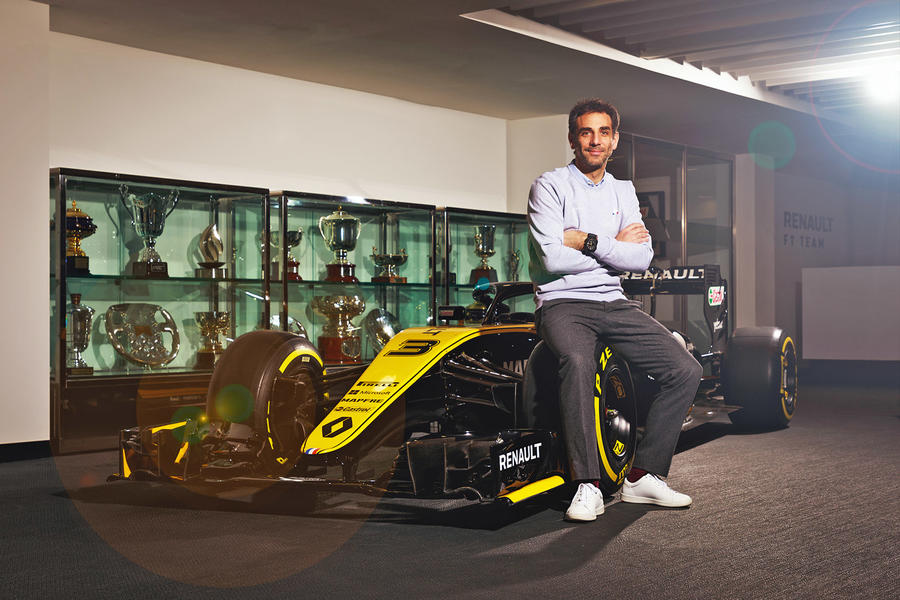 As managing director of Renault F1, Abiteboul has been at the helm since the car maker’s return as a full-blown factory team in 2016 – but has yet to witness a podium finish, let alone taste champagne. A ‘best of the rest’ fourth in the teams’ standings in 2018 represented progress, but a slip to fifth last year behind powertrain customer McLaren was humiliating.

“There is only one word: disappointing,” Abiteboul says of 2019. “It came after three seasons of progression. With Daniel [Ricciardo] joining the team, we would have liked to keep that going – and it stalled.”

At 42, Abiteboul is the youngest team principal in the paddock, and he has a commercial rather than an engineering background. As part of grand prix racing’s new generation, at the head of a true manufacturer racing team, he’s well placed to offer an inside view of F1, its future and Renault’s own in a sport some argue is out of step with its time.

First, Renault itself. There’s almost an assumption that it’s just a matter of time before it sells off the F1 team, just as it did in 2010 – especially because it’s not winning. Changes at the top, with Luca de Meo replacing the disgraced (but F1-friendly) Carlos Ghosn, have further fuelled speculation. Abiteboul doesn’t groan, but he might as well do. “It’s a pressure for all 10 teams,” he says, “but there’s something a bit awkward about Renault. It feels to me that we have to respond to that question much more. It’s not just you asking, it’s everyone. And I wonder why. 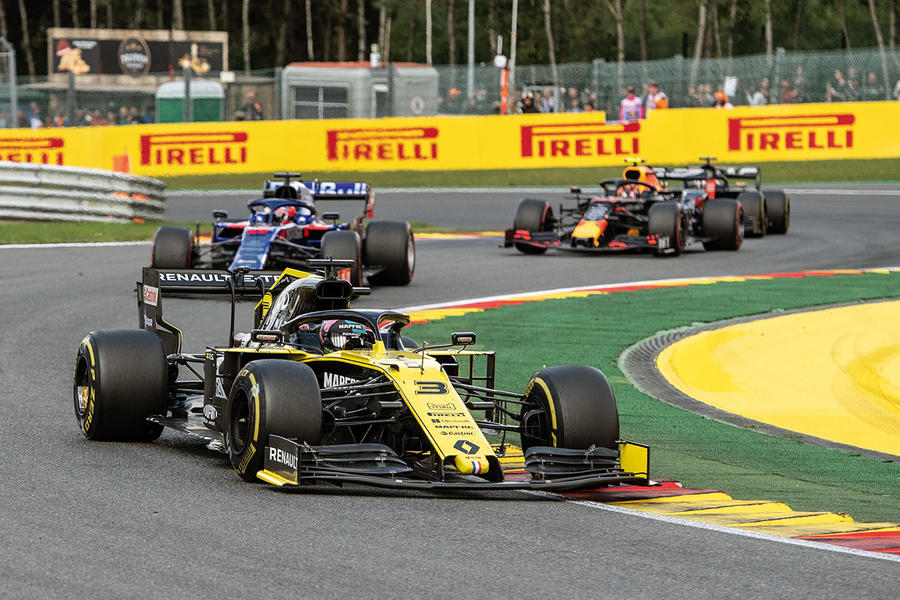 “We have been in F1 for 42 years in some shape or form. I accept our lack of consistency [see box, right], plus there have been some statements and changes of management. I get all of that. But the reality is we’re well established with two factories [the engines are built in Viry-Châtillon, near Paris], we’re now a group of 1200 people and we’re well advanced, not only for this year but into next.

“The new Concorde [Agreement, by which F1’s finances are distributed to each team] is progressing in the right direction and we’ve got a set of regulations which are very positive for us. Directionally, it’s all good.

“I do accept we are part of an automotive industry that is shaking, and that is also true for Renault. But are we really struggling more than [Mercedes parent firm] Daimler? I’m not sure. The value is here already and will be only better in the future. It’s down to us to crystallise our potential, starting with our performance. If our performance was better, we would have to respond to fewer questions of this type.”

His defence of F1’s relevance to car makers is no less assertive. “Connectivity, electrification, artificial intelligence, fuel efficiency, lifestyle…” he rapid-fires the merits. “Biofuels are coming, a first step in the right direction, plus a number of technologies that are becoming more relevant to car manufacturing.”

F1 may have embraced the hybrid age, but the paddock is resistant to full electrification. “For me, it’s not a step for F1, because we need enough energy density to race for 300 kilometres [186 miles] at a very high performance level,” Abiteboul says. “Right now, there’s nothing in terms of battery technology that can offer the same energy density. The big news for Renault at the start of this year is PHEV cars. Electrification and the internal combustion engine are complementary, not in opposition to each other.” 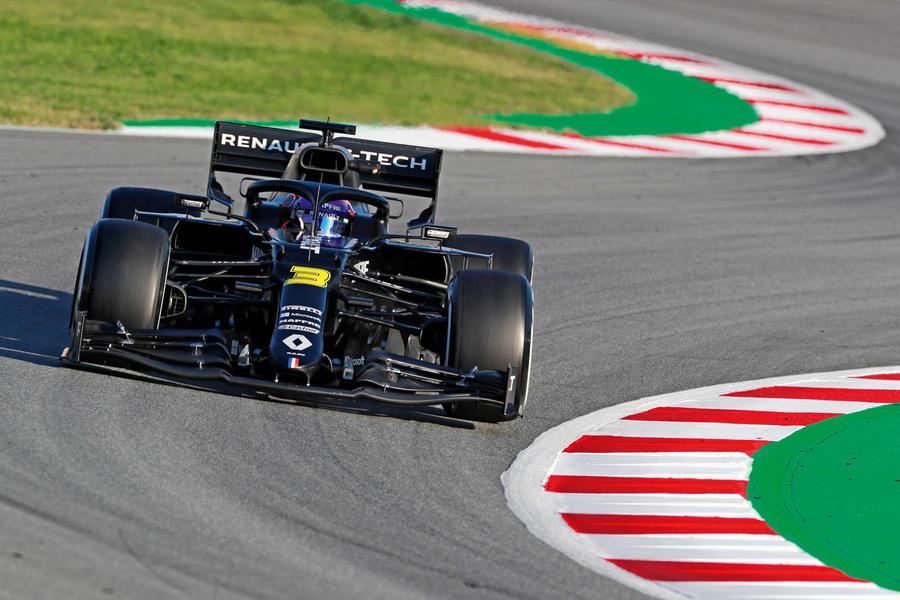 If F1 is truly in tune with wider automotive thinking, though, why don’t more car makers join in rather than head for Formula E? “It’s a risk if you aren’t capable of performing at the appropriate level – a huge risk,” he answers. “Already being in F1, we have critics that we weren’t able to fight for P4 last year, which is what I believe we will be doing this year. But P4 is quite an achievement. There are a number of brands, including the most established that are extremely well financed, that don’t even dare go into F1 because of the risk associated.”

Really? The likes of Audi and Porsche are running scared of F1 failure? And who would want to come in just to fight for P4? A budget cap in 2021, along with new technical regulations (now for 2022) and a fresh financial deal to bring about a fairer and more equitable distribution of revenue, all aim to make the sport more competitive.

“I think it’s a shame,” Abiteboul says of the budget cap, “but I don’t see a better way to fix a system that has been created by the last round of Concorde negotiations, which weren’t negotiations but bilateral agreements created by Bernie [Ecclestone] for a very specific purpose. It badly damaged the sport, and the only way is financial regulation. I don’t like it, but it’s a necessity. It’s a fix which might one day be replaced by something else.”

The criticism of Ecclestone references the individual deals he brokered with Ferrari, Mercedes and Red Bull to settle civil unrest among the teams around a decade ago. A union of teams dissatisfied at their share of F1’s success briefly threatened a breakaway – but Ecclestone turned to an age-old strategy of divide and conquer, fracturing the union by negotiating new terms on an individual basis. Tempted by self-interest, the ‘big three’ each buckled, signed their own deals and set F1 on course for the ‘us and them’ divide that’s so apparent today. 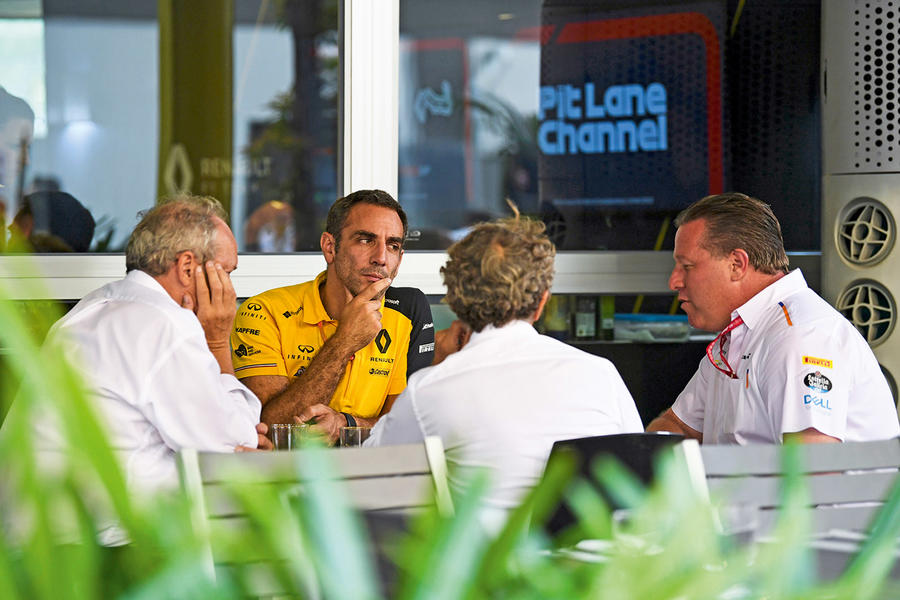 “We need to move away from the two-tier system,” says Abiteboul. “On one side, we’re doing an excellent job with new marketing initiatives such as Netflix and F1 city festivals, but if we really want to capture this new audience, we need to have a sport that’s much more competitive than the one we have now. What I really like about the [2022] regulations is that, for the first time, we have defined them for the show, rather than having a show that is a consequence of a set of regulations.”

But will the grid concertina and allow Renault to fight for victories? Abiteboul is cautiously optimistic – but deep down surely knows that his team’s future is banking on it.

“For sure, we will not be able to hide forever,” he admits. “The expectation has to be realistic and reasonable. But yes, [in 2022] we can’t hide if we aren’t capable of fighting for podiums. We don’t expect to dominate, but fighting for podiums is the target.”

Why less is more when it comes to F1 coverage

Will they test next versions of Apple CarPlay and Android Auto or something?

F1, as far as I am concerned, is a vehicle for some (including pilots) to make downright obscene amounts of money, to get laid and to prostitute themselves.

Entertainment value for me personally is tiny, if someone asked me to pay 10 bucks to get access to the races on TV - I would not pay. Why would I want to spend my money to feed the rich and spend my precious time watching this politicized show?

Will they test next versions of Apple CarPlay and Android Auto or something?

F1, as far as I am concerned, is a vehicle for some (including pilots) to make downright obscene amounts of money, to get laid and to prostitute themselves.

Entertainment value for me personally is tiny, if someone asked me to pay 10 bucks to get access to the races on TV - I would not pay. Why would I want to spend my money to feed the rich and spend my precious time watching this politicized show?

A lot of text. Don't watch it then, and don't waste your time commentating. Oh, and Cyril? A very promising F1 boss. Well, he promises this and that, but never delivers.

He would say that.

If you don't believe in your car, team etc, what are you doing there?

What a terrible interview.

What a terrible interview.

I assume he means well, by my goodness that is depressing.

It is the excruciating pursuit of 'relevance' that kills it. No other sport is driven by such a vacuous goal.

The very essence of sport is irrelevance.