BACK TO ALL NEWS
Currently reading: Mercedes-AMG One confirmed as hypercar's production name
UP NEXT
Geneva motor show axed for fourth consecutive year

Mercedes-AMG has confirmed that its upcoming hypercar will be named the One for production, with the model name signifying its position at the very top of Mercedes-AMG’s road car range.

The Mercedes-AMG One has now been fully revealed - click the link to read the full story.

The name is also a reference to the Mercedes-AMG Formula 1 engine used in the car. The powertrain itself has undergone hundreds of hours of testing in British facilities to meet what Mercedes-AMG refers to as "the immense challenge" of making it ready for series production. The Formula 1-derived 1.6-litre V6 will produce more than 1000bhp, although the specific figure is yet to be confirmed.

Earlier this year the Aston Martin Valkyrie rival was shown for the first time on the move and in near-production form. The concept version was revealed at the 2017 Frankfurt Motor Show. The brand has now revealed that the car’s active aerodynamics culminate on its retractable rear wing, with two stages of extension giving maximum downforce in the car’s most hardcore Race mode.

Mercedes-AMG boss Tobias Moers told Autocar that the downforce generated will be “approximately half the weight of the car” and confirmed that the One will weigh between 1300kg and 1400kg. Taking the 1350kg midpoint, this would indicate that the car is likely to produce around 675kg of aerodynamic downforce. The lap time will be assisted by this, despite the car not having an enormous fixed rear wing such as that on the recently revealed McLaren Senna, which produces a maximum downforce of 800kg.

The One is being tested on "closed-off test grounds and race tracks", with images showing it on the handling circuit at Millbrook Proving Ground in Bedfordshire. 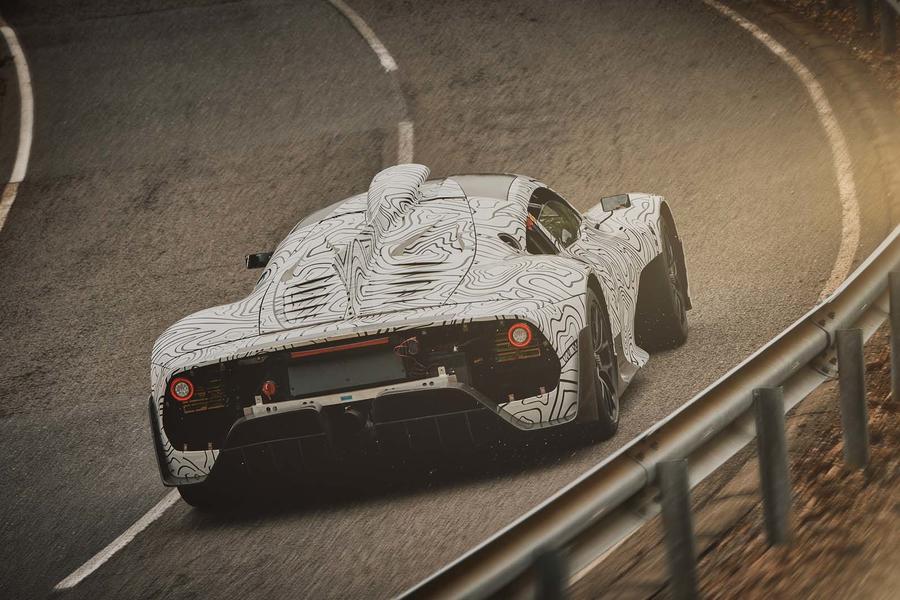 Moers has previously said it "makes sense" to build the hypercar in Britain, where the brand's Formula 1 team is based. The car's F1-derived powertrain is to be built at the racing squad's Brixworth base, but it is being adapted for road use by AMG. Moers admitted that the process is extremely challenging during a conversation at the New York motor show. "That powertrain is really complicated," he said. "It's good, but not good enough yet."

While not an immediate priority, Moers revealed that it's "reasonable to speculate" the One will eventually try to set a new Nürburgring lap record. He wouldn't be drawn on the car’s simulated Nürburgring lap time, but AMG is known to have studied past lap records in detail, including the outright record of Stefan Bellof, who lapped the circuit in 6min 11sec in a Porsche 956 sports car in qualifying for the 1000km race there in 1983. Bellof also set a race lap record of 6min 25.9sec in the same car.

The production road car record is currently 6min 44.97sec, held by the Lamborghini Aventador SVJ. Moers did say, however, that the biggest challenge he faced in extracting the best lap time from the One would be “finding the right driver” to accomplish the feat. 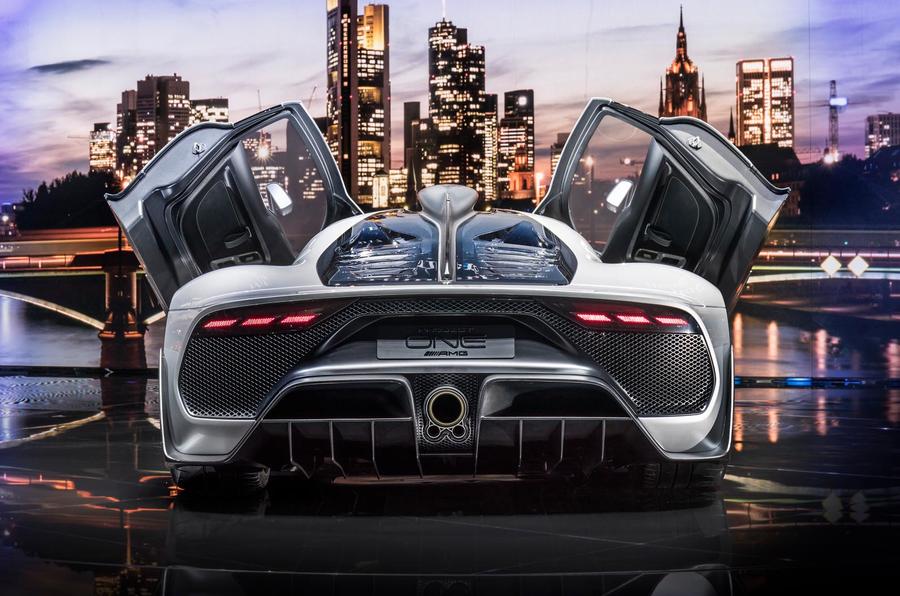 It's not clear at what speed the Project One's maximum downforce figure is developed; in the Senna, it comes at 155mph. Like the Senna and Ford GT, the One’s driver will be able to lower the car for track driving, increasing the amount of downforce. This is just one of many facts about the hypercar that have emerged since its launch at last year's Frankfurt motor show.

Moers stated very clearly that the 1000bhp output quoted for the car is just what the 1.6-litre V6 hybrid engine is developing on the dynamometer at present and that its actual output will be that figure “plus, plus, plus”. Ultimately, he said he expected it to be below 1100bhp, but it's not yet known by how much.

Lewis Hamilton reveals the Project One - in pictures

According to Andy Cowell, head of Mercedes’ High Performance Powertrains division, the biggest challenges with the engine are not keeping it reliable or adapting to road car use; it will idle in a Dubai traffic jam in mid-summer without overheating. Instead, he cited emissions and persuading an engine that usually requires a team of engineers to operate “to start at the press of a button, in all weather conditions, regardless of how long it’s been left”.

AMG boss Tobias Moers on the challenges of Project One

It also now seems that, while the engine will be produced in Brixworth, Mercedes’ F1 team will be involved largely on a consultancy basis. Even so, almost all the other important components will be made in the UK, including the bespoke robotised manual eight-speed gearbox that Xtrac is developing, as well as the tub and bodywork, which will be produced by an as-yet-unnamed third party.

Moers confirmed that, despite the car’s price of approximately £2.4 million, AMG received 1100 requests from credible customers for the 275 units that will be built.

....produced by an as yet unnamed UK supplier. Wonder if this will be coming from a small firm based in Sheffield who go by the acyronym MCTC? That would be a nice little bit of press for Mclaren opening their new Composites facility if they are third party supplying the Mercedes-AMG One.

....produced by an as yet unnamed UK supplier. Wonder if this will be coming from a small firm based in Sheffield who go by the acyronym MCTC? That would be a nice little bit of press for Mclaren opening their new Composites facility if they are third party supplying the Mercedes-AMG One.

Thats some engineering achievment. I rallied 1.6litres 20 years ago and thought 130BHP was pretty hot. Shit I am getting old lol