A 0-62mph time of 2.8sec and a 217mph-plus top speed, plus a Nurburgring lap record, make it the fastest Lamborghini on sale
Share
Open gallery
Close
Share story

The Lamborghini Aventador SVJ has been shown at the Paris motor show after its official reveal at the Pebble Beach Concours d’Elegance – and it can lay claim to the title of fastest Lamborghini you can buy new.

With 759bhp and 531lb ft on tap, the SVJ (Superveloce Jota) matches the power output of the ultra-low-volume Centenario and is 29bhp more powerful than the Aventador S. This power figure is produced by a tuned version of Lamborghini's naturally aspirated 6.5-litre V12 and is transmitted to the road through all four wheels.

Four-wheel steering is also fitted, as per the Aventador S, but the SVJ builds upon the standard car’s agility with a second generation of its active aerodynamics system (ALA 2.0), with improvements over the first system including redesigned air inlets and aero channel designs. The system aided the SVJ in lapping the Nürburgring circuit in 6min 44.97sec - a new record for a production car.

Lamborghini claims the SVJ’s downforce is 40% greater than that of the Aventador SV - its former performance flagship. Larger side air intakes, a huge rear wing, tweaked underbody with vortex generators and prominent rear diffuser and aerodynamic bodywork at the front help to achieve the improved aero figure.

We've driven the Aventador SVJ - get the verdict here 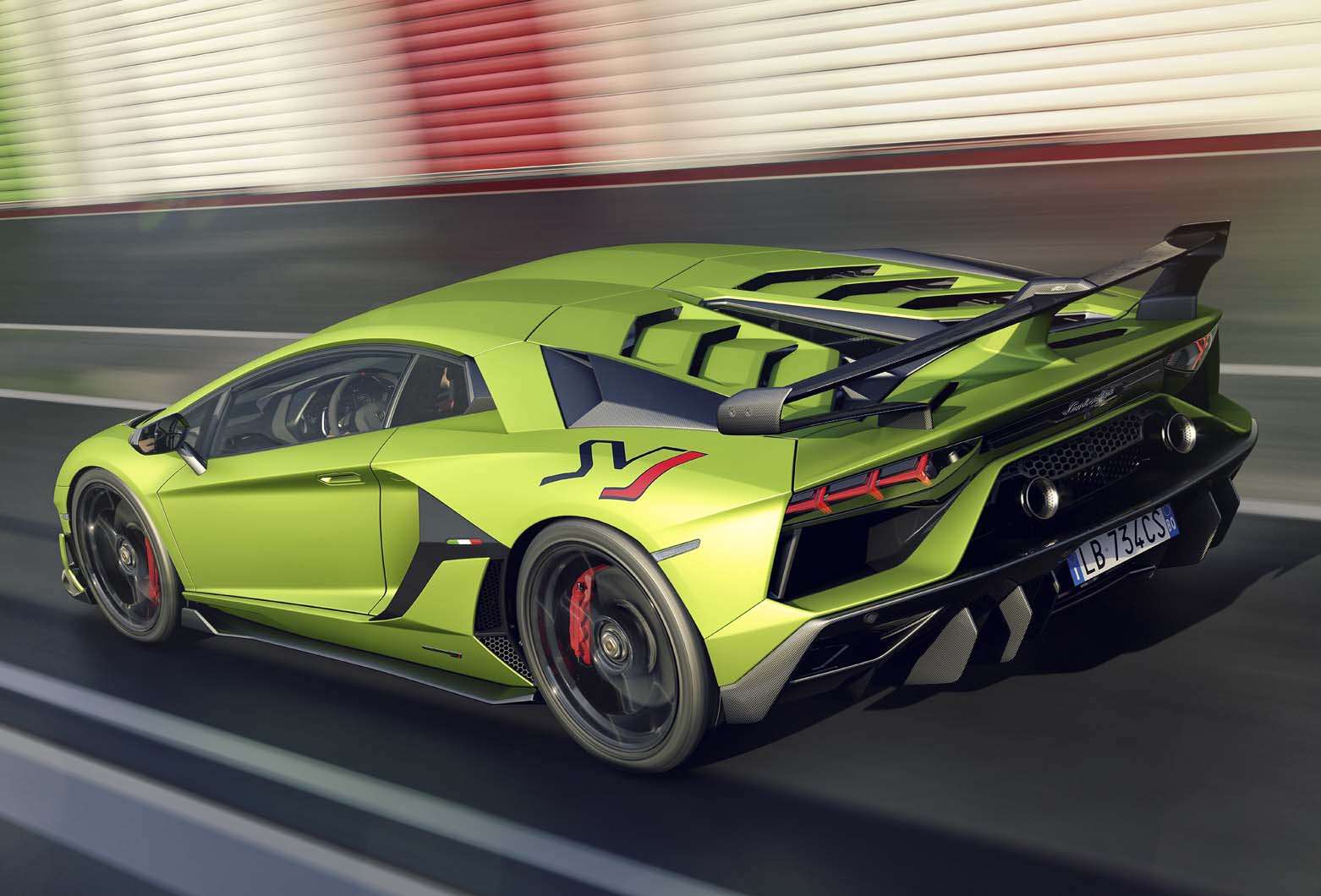 The chassis is tweaked for additional stiffness - a 50% stiffer anti-roll bar compared with the Aventador SV has been fitted, while the suspension’s damping force range is increased by 15% over the SV. Other tweaks to the suspension are claimed to improve the car’s on-track stability.

A re-engineered exhaust system reduces back pressure and has been fettled to produce a "more emotive' sound, as well as being lighter than the standard set-up, with higher exit points.

Also among the mechanical upgrades is a tweaked seven-speed automated manual gearbox, while the four-wheel drive system now sends 3% more torque rearwards. The stability control and ABS systems are tweaked to accommodate the greater grip provided by the active aerodynamics. 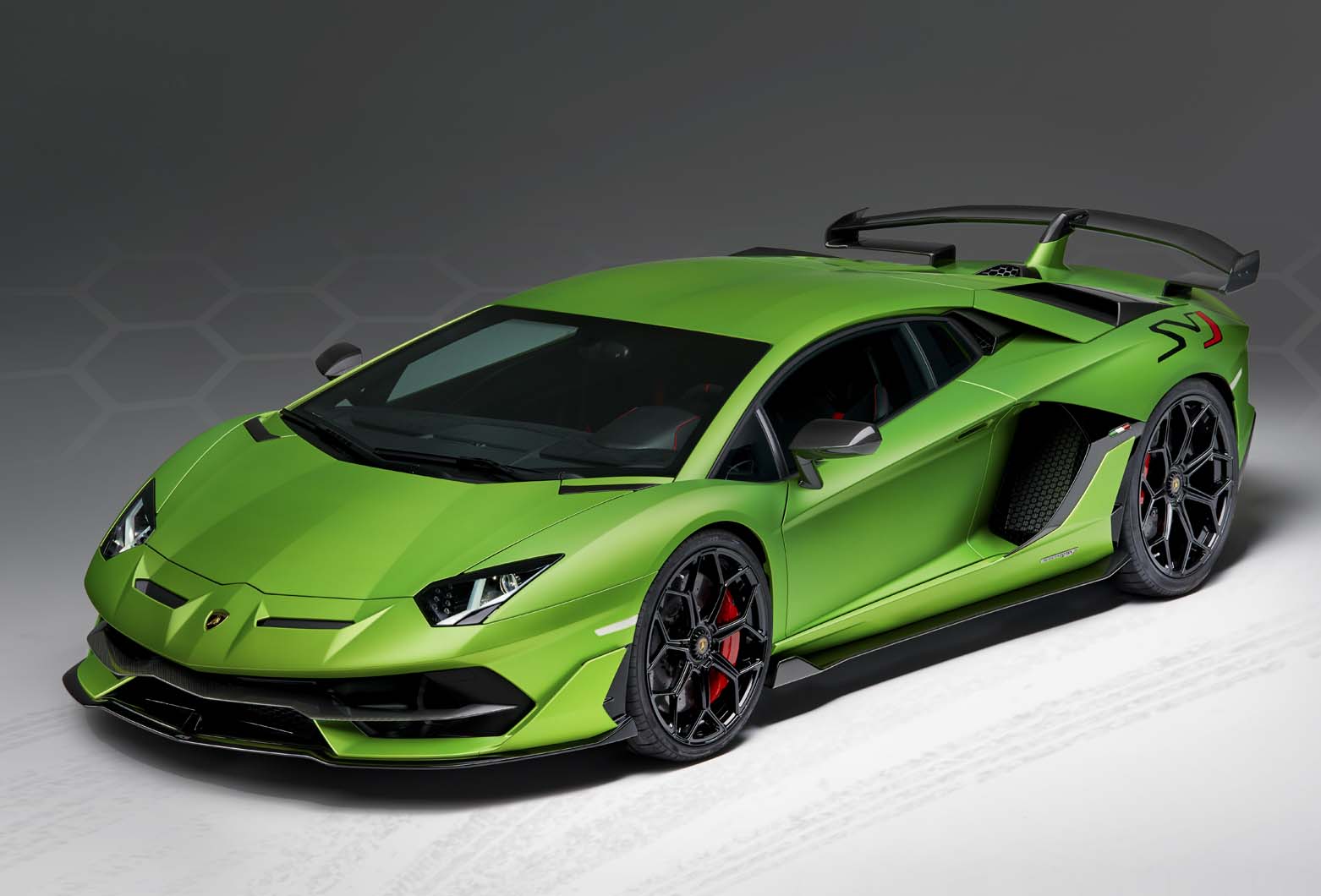 The car’s exclusive aluminium Nireo wheels are shod in specially made Pirelli P Zero Corsa tyres and are stiffer, with a bespoke tread design for the Aventador SVJ.

Lamborghini plans to build 900 SVJs, with UK prices starting at around £356,000 when deliveries begin in early 2019. An additional 63 units will be produced in 63 Edition guise, of which the Pebble Beach reveal car is one, celebrating the brand’s 1963 inception. These feature a bespoke colour and trim and will carry a higher price tag than the regular SVJ.

Whenever I see a new Lamborghini I know I’m seeing the most exciting looking Car on the Road bar none.

I agree Peter, nothing beats this for the sheer theatre it brings to the road.