BACK TO ALL NEWS
Currently reading: Mercedes-AMG plots first EV-only sports car
UP NEXT
All-new entry-level McLaren to be 600bhp-plus V6 PHEV

Mercedes-AMG has begun work evaluating its first series-production electric performance car, CEO Ola Källenius has revealed, although he has declined to give any specifics.

Talking about the performance brand's future, Källenius said: "We have to get to the point where the means of propulsion is not considered important, because AMG is all about the experience of customers.

“That is why we are starting to work not just on electrified AMGs but also our first fully electric AMGs.”

Mercedes-AMG previously launched the limited-edition SLS Electric Drive in 2013, priced at around €450,000. It was powered by four electric motors producing 740bhp and 738lb ft of torque and delivering a 0-62mph time of 3.9sec.

The model was briefly the fastest production EV in the world. However, range was limited to 160 miles on the official test cycle, and greatly reduced if the car’s performance was fully utilised.

Although official figures have never been released, it is believed that fewer than 100 cars were sold. 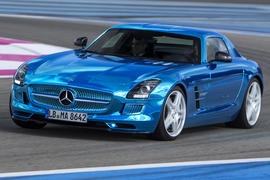 Mercedes' Electric Drive supercar is capable and beautifully well resolved, but its huge weight gain and prohibitive price detract from the overall appeal