BACK TO ALL NEWS
Currently reading: New Smart Fortwo EQ and Forfour EQ priced from £16,850
UP NEXT
Spending 48 hours touring in a Ferrari Roma

The revised line-up opens with the two-seat Fortwo, with prices rising to £17,285 for the larger Forfour and topping out at £20,420 for the soft-top Fortwo Cabrio. All prices include the Government's £3500 electric car grant.

Standard equipment includes a multifunction leather steering wheel, rear parking sensors, 7.0in touchscreen, a charger finder, Bluetooth, automatic climate control, a DAB radio and Android Auto. A 22kW onboard charger is said to allow the battery to be charged from 10-80% capacity in 40 minutes.

The models, which made their public debut at the Frankfurt motor show in 2019, are said to allow the brand to “return to its origins”. Parent company Mercedes-Benz first envisaged an urban vehicle powered by a zero-emissions powertrain long before Smart was even formed.

After offering electric versions of its models in both generations since 2007, Smart announced in 2018 it would transition to a “fully electric urban mobility brand” as its leadership was overhauled, ditching its three-cylinder petrol engines. 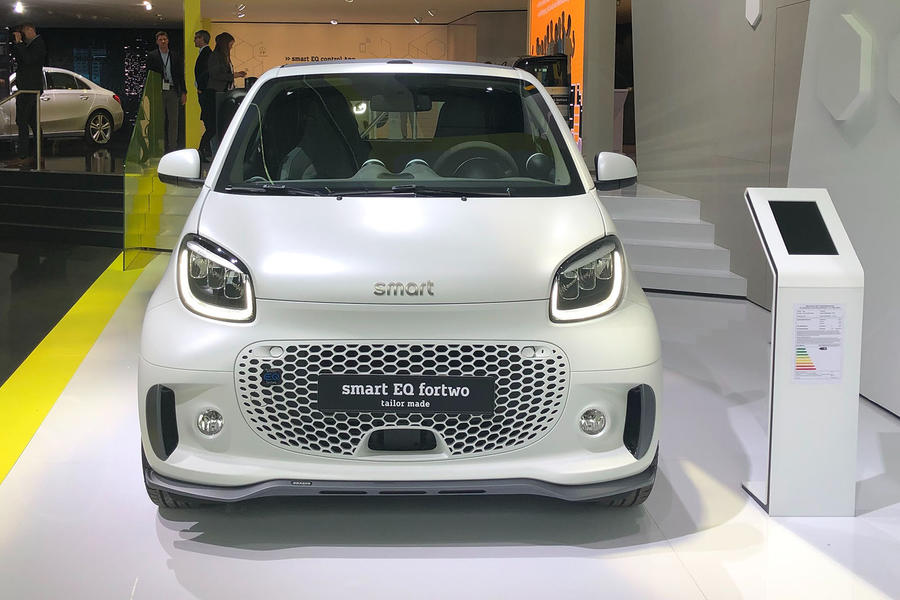 The exterior of the new Smart EQ trio, described as “radically simple” by Daimler design boss Gorden Wagener, is evolutionary. The grille has been lowered and made larger, albeit with much of the surface area blanked off, because EVs require less air cooling.

For the first time, the Fortwo and Forfour have different front-end looks, with Smart giving the four-seater a more “dynamic” profile than the “familiar friendly face” of the Fortwo. New tail-light designs also feature, while full LED headlights are optional, as are variety of colour combinations.

A revised centre console inside brings a new compartment in front of the drive selector to accommodate smartphones or two removable cupholders. More significantly, a new, simplified infotainment system offers better smartphone and wearable tech compatibility at the expense of some on-board functions, making greater use of a devices own apps and immediately introducing new apps or features when the customers downloads them or upgrades their phone. There’s also a redesigned smartphone app that displays the car’s level of charge and allows pre-entry climate control to be programmed. 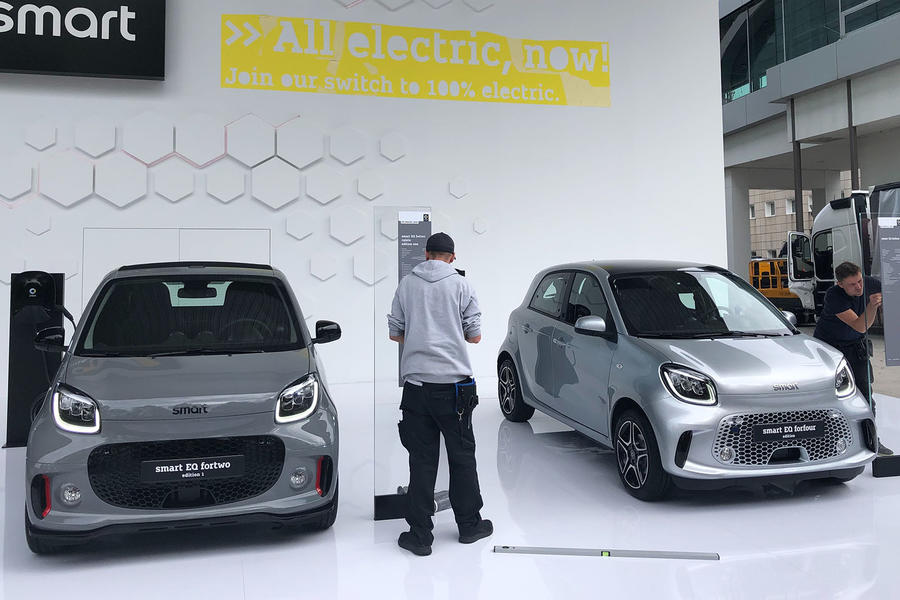 The motor is fed by a compact 17.6kWh battery, allowing a claimed range of "around 70 miles" - significantly less than most EV rivals. Smart claims this is still “several times” the average daily distance driven in Germany, however, and the small battery size and weight means less packaging and dynamic compromises.

New features such as radar-based kinetic recuperation, which allows the car to slow down automatically behind the vehicle ahead in the ideal way to charge the battery, also help extend the range.

The other benefit of the small battery is charging times. Even a standard domestic socket can charge an EQ model in just over three and a half hours, while an optional 22kW on-board charger can take the range from 10% to 80% in 40 minutes. There's still no DC rapid-charging capability, but Smart is cooperating with network partner Plugsurfing, which claims to allow easy access to almost all public charging points via its app.

Prices for the new Smart range have yet to be announced, but we don’t expect them to stray too far from the outgoing model’s base price, given the lack of any powertrain upgrades.

To use a word from the 60's 70's funky ,and that's just about all you could say, I agree with others about a small sports car , they should have one,maybe an EV powered one?

Autocar say they haven't seen the interior, but it is on the Smart Press release website. It is the same, bar a few details, like carplay option and the cubby in front of the gear lever being different.

As for the looks, not bad. The fortwo version looks like a Mk1 Citreon C1 redesign.

Still wish they hadn't got rid of the petrol version until the next generation. As it is, it is going to be a tough sell, particularly to current owners

The fronts look a lot better although the difference between the Fortwo and Forfour seem hardly worth mentioning from the pictures.  I still prefer the shape of the Mk1&2 though.