Audi has pulled the wraps off its Q8 concept at the Detroit motor show, offering a clear glimpse of what’s to come in its future flagship SUV, which is due to be released next year.

The Detroit concept sports a striking exterior design that combines the large footprint of an SUV with the sleek lines of a coupé. It is powered by an e-tron-badged plug-in hybrid powertrain made up of a 3.0 TFSI petrol engine, which produces 329bhp and 369lb ft, and an electric motor.

A 17.9kWh lithium ion battery is located at the rear. It gives a claimed all-electric range of 37 miles and takes two and a half hours to fully charge via a 7.2kW charger. With a full tank of fuel, the Q8 has a claimed maximum range of up to 621 miles. 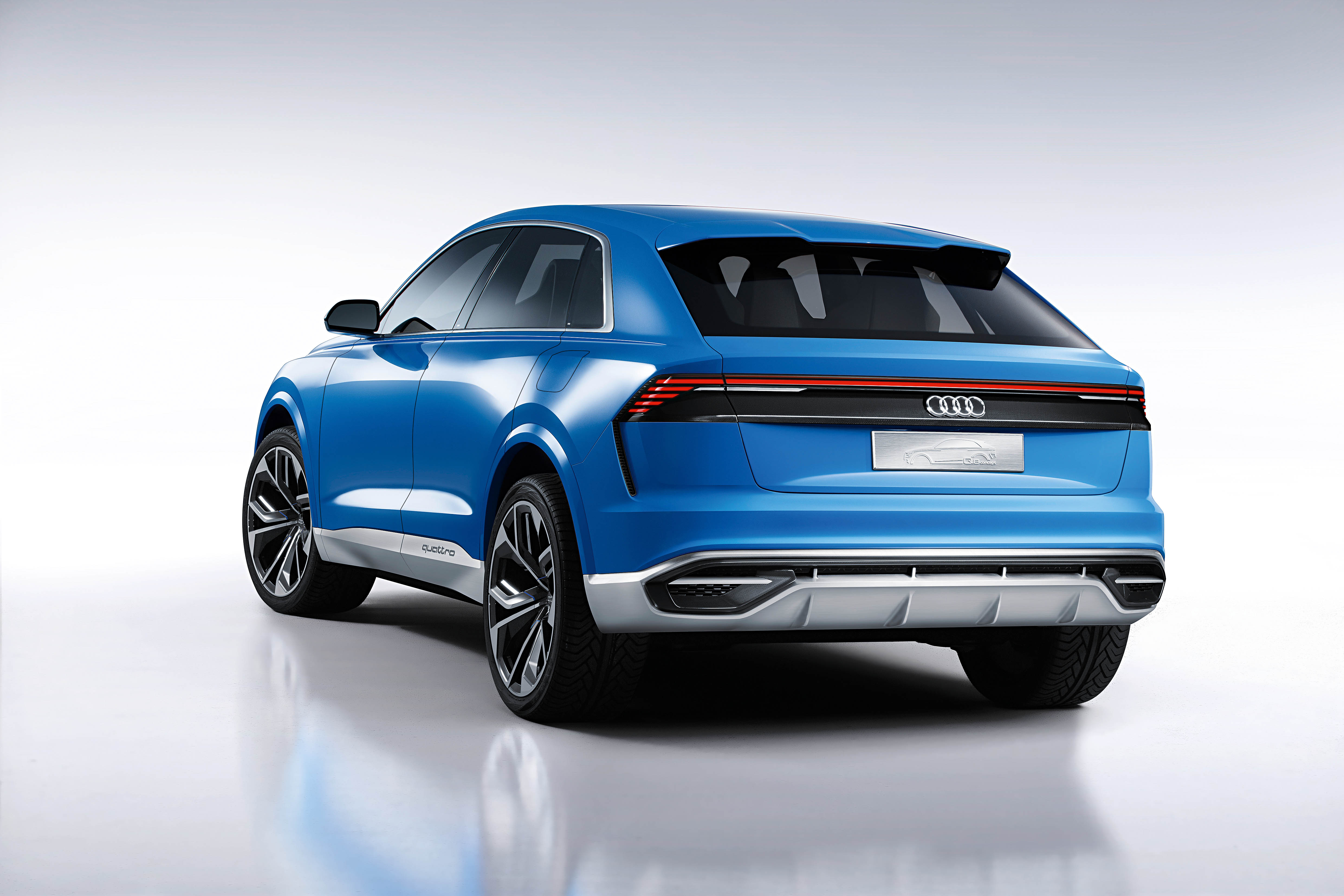 The concept uses an eight-speed tiptronic automatic transmission with permanent quattro four-wheel drive. It features a torque control system to improve agility by braking an inside wheel when cornering at speed.

The car sits on five-link adaptive air suspension front and rear. Adjustable damping control allows the driver to switch from Comfort through to a firmer Sport mode, with the different settings raising or lowering the car by as much as 90mm.

Much like the smaller Audi Q2, Audi’s designers have used the arches to give the lower section of the car a more muscular stance. The wheels wear 305mm-wide tyres and feature intertwining Y-spokes. The concept also has 20in ceramic brake discs. 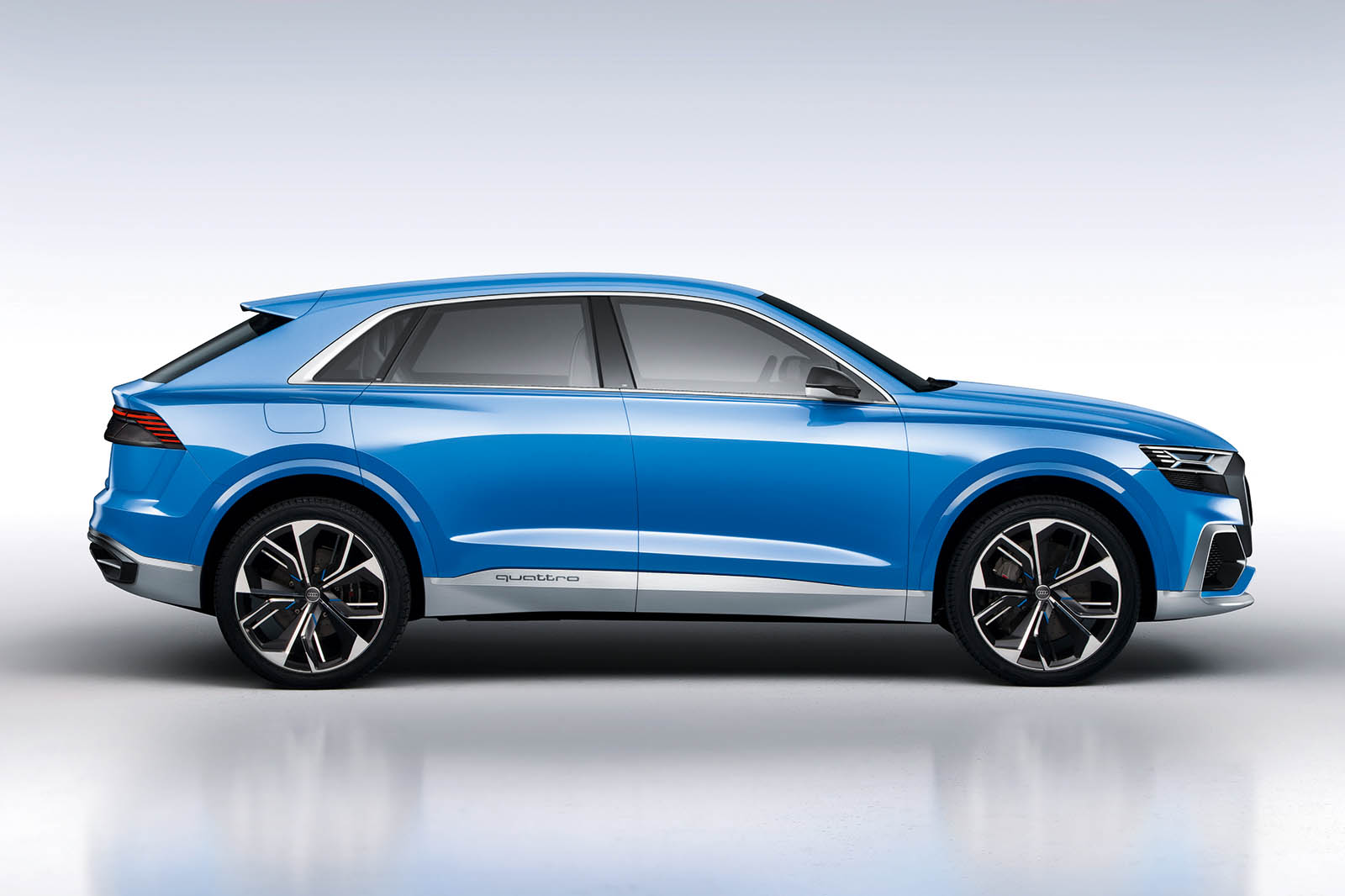 An octagonal grille, bigger than that fitted to any current production Audi, dominates the concept’s front end. It features a honeycomb pattern inlay and extends down towards the front bumper, where it is undercut by an aluminium blade.

The Q8’s headlights follow the lines of the grille and bonnet and feature digital Matrix laser technology that can project one million pixels onto the road ahead. There are also LED daytime running lights, which double as dynamic indicators, mounted within the headlight cluster.

At the rear, the tail-lights extend across the full width of the car and use LED technology to allow the single strip of lights to act as brake lights and dynamic indicators. Both the black trim panel that the light strip is mounted on and the car’s C-pillars are said to be inspired by the Ur-quattro of 1980. 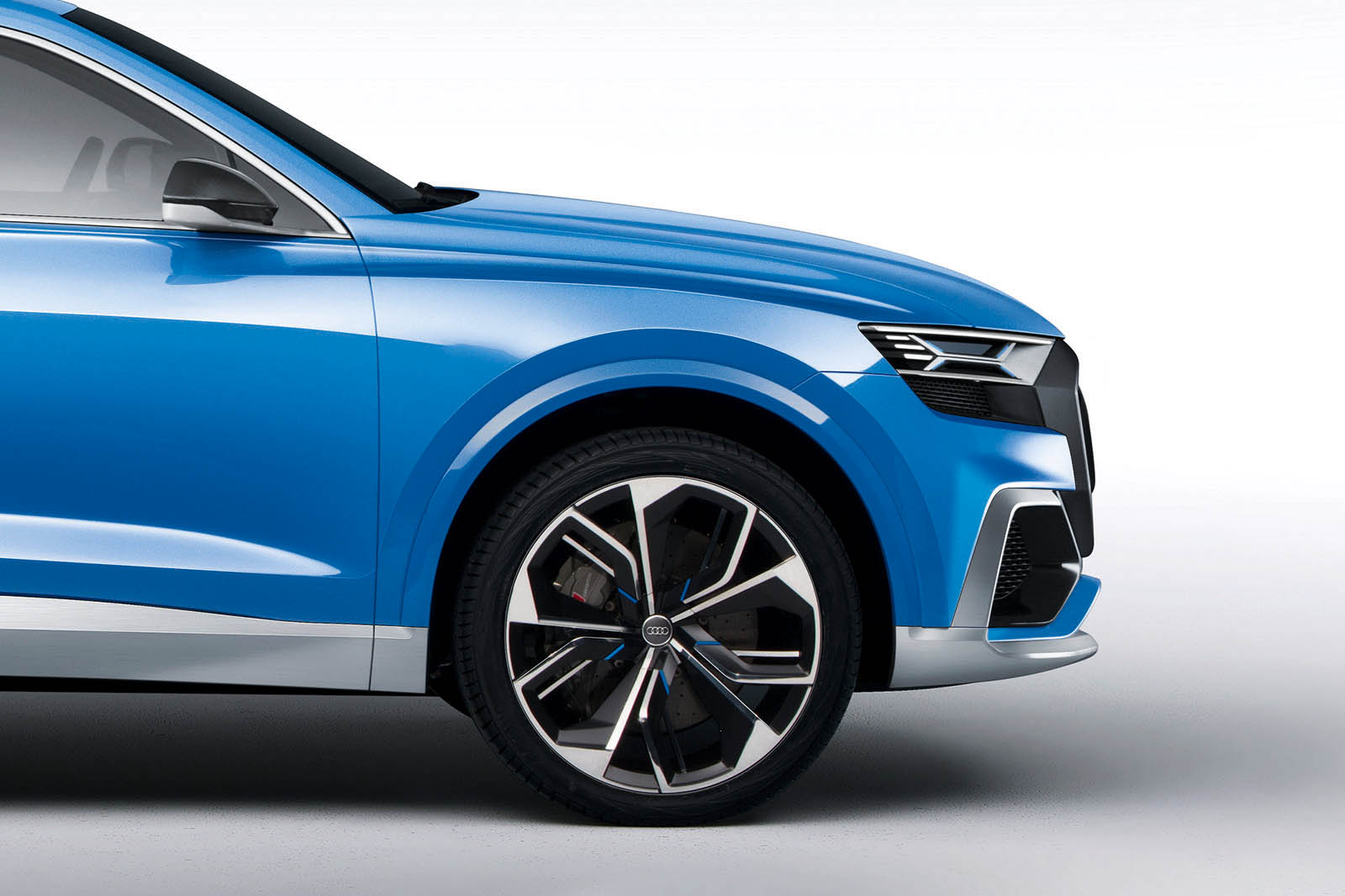 The frameless doors are opened by touch sensors that detect the presence of a hand or fingers and then open the doors automatically to a defined angle.

Inside, the Q8 concept has four fine nappa and nubuck leather-wrapped seats and Audi’s Virtual Cockpit technology. The digital displays are headed by a 12.3in TFT screen that features a new design for its menus and works with augmented reality to project virtual graphics over the windscreen. Additionally, the Q8 has a 630-litre boot — 80 litres bigger than that of a Range Rover. The Q8 concept will inspire a production version that’s due to go on sale next year.

The Q8 is scheduled to be built at Volkswagen’s Bratislava plant in Slovakia alongside the current Audi Q7 and future versions of the Porsche Cayenne and Volkswagen Touareg.

Opinion: Why the Audi Q8 will be a major sales success

Where the product sells you the dream. Like Apple on 4 wheels!
dickieb 11 January 2017

Sleek lines of a coupe?

Can someone show me where these sleek lines are?
It's the same generic Audi look like a giant cross between a Q3 and Q5 with a hideous grill.
Horrific.
Pete-Suffolk 10 January 2017

Whenever a design is described as striking, it is code for flipping hideous! And that front certainly is! To think Audi earned its initial reputation by producing cars of such understated good taste! The rot set in when the snout suddenly doubled in size. Now they seem embarked on a drive to make ever uglier fronts on their cars.
View all comments (15)