The Audi Q8 Sport Concept, a sporting 469bhp variant of the brand's forthcoming Q8 large SUV, has been revealed at the Geneva motor show.

The second Q8 concept - the first was revealed at the Detroit motor show in January - runs a newly developed petrol-electric hybrid driveline that is claimed to endow it with 0-62mph acceleration in 4.7sec along with an overall range of up to 746 miles, in combination with an 85-litre fuel tank and 0.9kWh lithium ion battery pack.

The new Audi is expected to be placed into production in 2018, acting as a range-topping model in the new Q8 line-up. Although officials at Audi’s Ingolstadt headquarters in Germany initially hinted the new SUV would wear RS Q8 badges, it now appears it will be marketed under the SQ8 name.

The Q8 Sport Concept is outwardly distinguished from the earlier Q8 Concept by a series of stylistic upgrades aimed at endowing it with a more sporting appearance than its milder powered sibling. Included is a restyled single frame grille featuring a black frame and honeycomb lattice insert.

The new grille is set within a more heavily structured front bumper housing enlarged air ducts and a more prominent splitter element in the form of a black blade along its lower edge. The headlamps have also been modified with darkened inserts but retain the same distinctive x-shaped LED graphics as the earlier concept to give the new Audi a rather sinister look from front on.

Further back, there are black exterior mirror housings and black sills underneath the doors. Compared to the Q8 Concept revealed at the Detroit motor show in January, the wheel houses have also been widened by a further 12mm.

The rear end of the new SUV is dominated by a full width tail lamp graphic set within a black panel. On the Q8 Sport Concept, the lower section of the bumper adopts a black diffuser rather than the silver element used by the original Q8 Concept. It also eschews the earlier trapezoidal shaped tailpipes for oval shaped exhausts, typical of Audi’s more performance orientated models.

Rounding out the visual upgrades are new 23-inch alloy wheels with intertwining spokes. Some 11-inches in width, they come shod with 305/35 profile tyres and hide sizeable 508mm carbon ceramic brake discs.  The first official photographs of the new Audi also hint at a lowered ride height for the Q8 Sport Concept in keeping with its sporting pretensions.

At 5020mm in length, the Q8 Sport Concept is 30mm shorter than the Q7, with which it shares its platform, quattro four-wheel drive running gear and air sprung suspension.

The petrol-electric hybrid driveline previewed by the Q8 Sport Concept is planned to feature in a number of new Audi models, including future incarnations of the A6, A7 and Q8 as well as the Q7 and a production version of the Q8 due out later this year.

It is based around a twin-turbocharged 3.0-litre V6 direct injection petrol engine which borrows engineering solutions used by the twin-turbocharged 4.0-litre V8 common rail diesel used by the SQ7, including a 48-volt electrical system and an electrically powered compressor that operates at up to 70,000rpm to boost air supply and help improve low-end flexibility. Alone, it delivers 444bhp and 391lb ft of torque.

The combustion engine is allied to a disc-shaped electric motor mounted within the front section of the Q8 Sport Concept’s eight-speed torque converter equipped automatic gearbox, delivering 27bhp and 125lb ft of torque. Together, they provide a combined system output of 469bhp and 516lb ft. 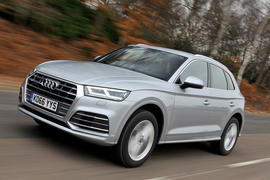 Energy used to power the electric motor is stowed in a 0.9kWh lithium ion battery pack mounted within the floor of the Q8’s luggage compartment. Audi says the operating strategy of its new petrol-electric hybrid system allows the big SUV to move slowly in stop/start traffic with the combustion engine idled, as well as enabling manoeuvring and parking exclusively under electric power. During braking, a newly developed energy regeneration system employs the electric motor as a generator to recharge the battery.

“The drive system of the Q8 Sport Concept is a major step towards optimizing efficiency. The combination of mild hybrid technology and combustion engines sets a new benchmark. In the future, it will be used in many Audi models,” says Audi chairman, Rupert Stadler.

Audi claims the production version of the Q8 Sport Concept will deliver 0-62mph acceleration in 4.7sec and a top speed of 171mph. The German car maker also says it will deliver an overall range of up to 746 miles on an optional 85 litre fuel tank.

In the time when i show all

In the time when i show all the new information about all of the new car model. These car model is best and you will trying to take all of these models which are best for your lab report writer . I know that you like this new model of car which you saw on your screen.
Highline2.0 7 March 2017

The more I look at it the

The more I look at it the more Q3 I see in it. Definitely has presence though.
NoPasaran 7 March 2017