This is the fifth-generation Range Rover, and, well, it doesn’t feel like it needs a reinvention, does it?

While the new Land Rover Defender was a product transformed and the latest Land Rover Discovery went a bit on-piste compared with its predecessor, what we have here is the same luxury-car-meets-SUV – the sort of model the Range Rover helped to define – only more so. More luxury, more refinement, more size. More technology? More price? Put it this way: “Alexa, how much is this new Range Rover I’m sitting in?”

Some background, then. The new Range Rover can be had in short or long-wheelbase forms, and both are larger than the versions they replace.

It rides on a new platform called MLA Flex, 80% aluminium but with a steel bulkhead at the front. There are rings of strengthening steel, too, around the lower body at the A-pillar section, and the whole body at the C-pillars and D-pillars, plus around the edges of the front-door apertures. Static torsional rigidity is said to be 33kN per degree – up to 50% better than previoulsy.

The Range Rover was a big car before and remains one now. The standard-wheelbase version is 5052mm long, up 75mm on the last one, with a 2997mm wheelbase, while the long-wheelbase variant adds another 200mm to those totals. The Bentley Bentayga is 5141mm long, the BMW X7 5151mm. The Range Rover is also wide, at 2209mm across the body – seemingly the same width as across its door mirrors.

The new 2022 Range Rover Sport, as imagined by Autocar

Inside the industry: Can an SUV be green?

Inside the industry: Can an SUV be green?
Advertisement
Back to top

Most Range Rovers will be five-seaters, but the LWB can be had with an additional row of seats to make seven, or fancy versions can have just four – perhaps with a motorised fold-out table if in LWB form.

The Range Rover is immediately available as an SV variant from Jaguar Land Rover's SVO division with these kinds of interior features, so you really can spend as much as you like. 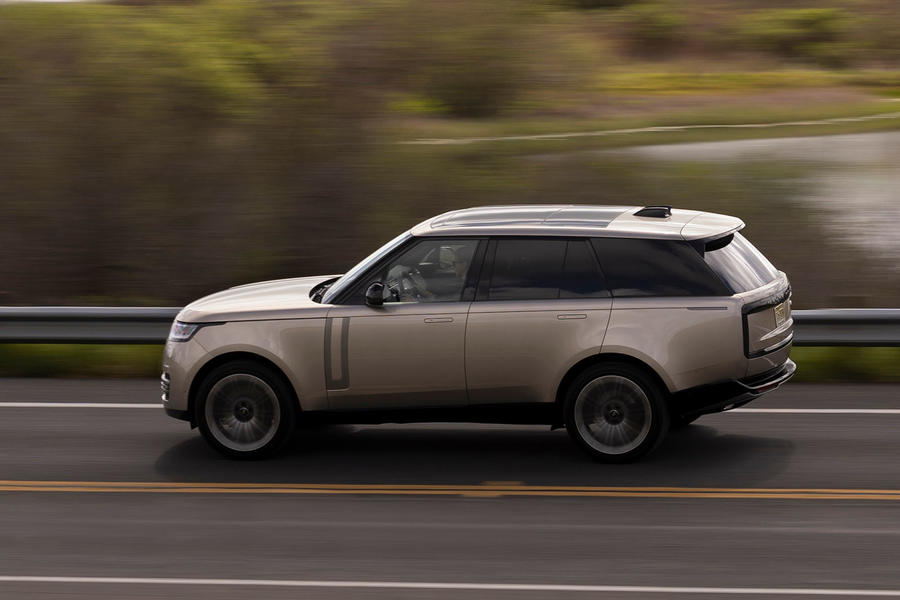 The line-up is comprehensive at launch and will rapidly become more so. Engines are mild-hybrid petrols badged P360 and P400, those numbers referencing horsepower; mild-hybrid diesels called D250, D300 and D350; a V8 petrol (P530); and two petrol-electric plug-in hybrids, the P440e and P510e. A fully electric variant is coming in 2024.

An eight-speed ZF torque-converter automatic gearbox is mated to them all, with a low-range transfer box to aid the off-road capability I will come back to.

The Range Rover rides exclusively on air springs, with no coil option; can raise itself by up to 135mm for off-roading and lower itself by 50mm to ease entry; and has 48V active anti-roll bars, with software that reads the sat-nav to know when corners are coming up and adjust them accordingly.

Suspension is by double wishbones at the front and a five-link at the rear, with torque-vectoring by braking and an electronically controlled limited-slip differential at the rear as standard.

There’s also standard active all-wheel steering, with up to 7.3deg of opposing action at low speeds, giving an 11.37- metre turning circle wall to wall – the tightest of any Land Rover and about the same as the Volkswagen Golf’s.

Also fitted as standard are Land Rover’s Terrain Response II traction and stability control systems, which can adjust the engine and gearbox response as well as chassis electronics off-road, when the Range Rover is in permanent four-wheel drive. It will go to two-wheel drive on road between 21mph and 100mph, unless it’s below 3deg C.

That’s said to reduce CO2 emissions by up to 4g/km, and the drag coefficient is a relatively slippery 0.30Cd, but nonetheless this is a big, heavy and thirsty car. It weighs at least 2379kg (the short 3.0-litre petrol) and up to 2735kg (a long PHEV).

I wonder if this car has the broadest emissions range of any vehicle: a PHEV puts out 21g/km of CO2, the 4.4-litre twin-turbocharged V8 270g/km.

In front of me as I write are 148 pages of description and technical details, and it feels significant that we’re 91 pages in before reaching the section called ‘capability’, and it talks about off-roading. 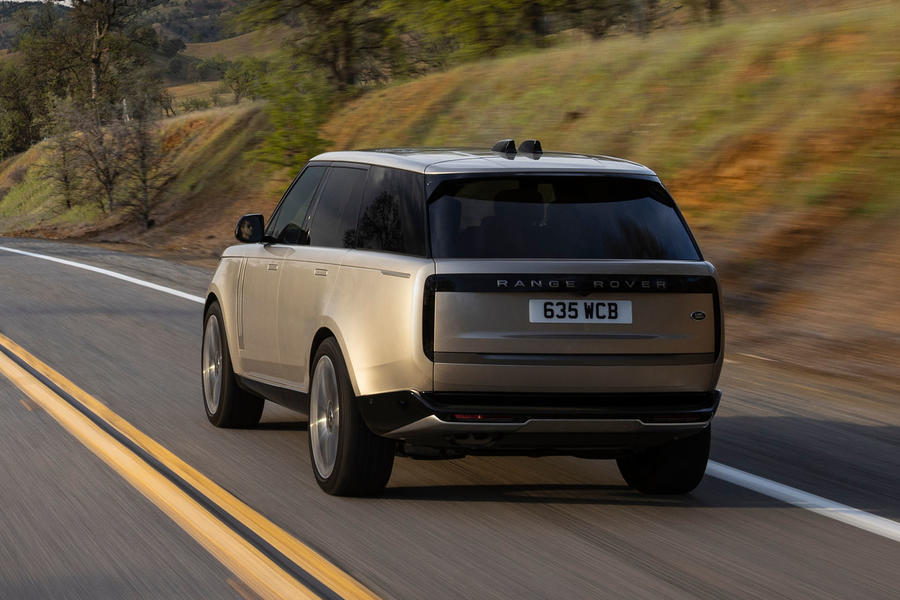 Till that point, most things are about refinement and isolation. Among the 35 interior speakers are noise-cancelling functions, including in the headrest-embedded 60mm speakers. The closed-section steel front bulkhead is said to reduce low-frequency vibrations and cabin noise by 24%. There are powered doors and an automatically folding load-space cover. The biggest wheel options, 23in, are said to be no heavier than the old 22s and not detrimental to the ride.

And certainly the cabin feels plush. The front seats are large and perceived material quality is good. Sit in, get comfortable and play with the Pivi Pro infotainment touchscreen that, at 13.1in, is bigger than ever.

It’s yet another one that’s modelled on a smartphone, Land Rover says, concerningly. As these things go, it’s not too bad; there’s Amazon Alexa voice control and there are separate controls for the heating and ventilation and the terrain response. Although couldn’t they have put a separate rotary dial to cover the lot there instead?

Spaciousness in the front is generous and in the rear really generous. You can even get adults comfortable in the third row of a long-wheelbase variant. There’s not loads of luggage room behind them, but that’s inevitable.

With all three rows in place, there’s 312 litres on the seven seater through to 2601 litres with all the seats flat. The boot-floor cover can lift and lock in a couple of different ways, one of which providing a backrest if you’re sitting on the lower tailgate (it drops down whilethe top hinges up, in traditional Range Rover style). 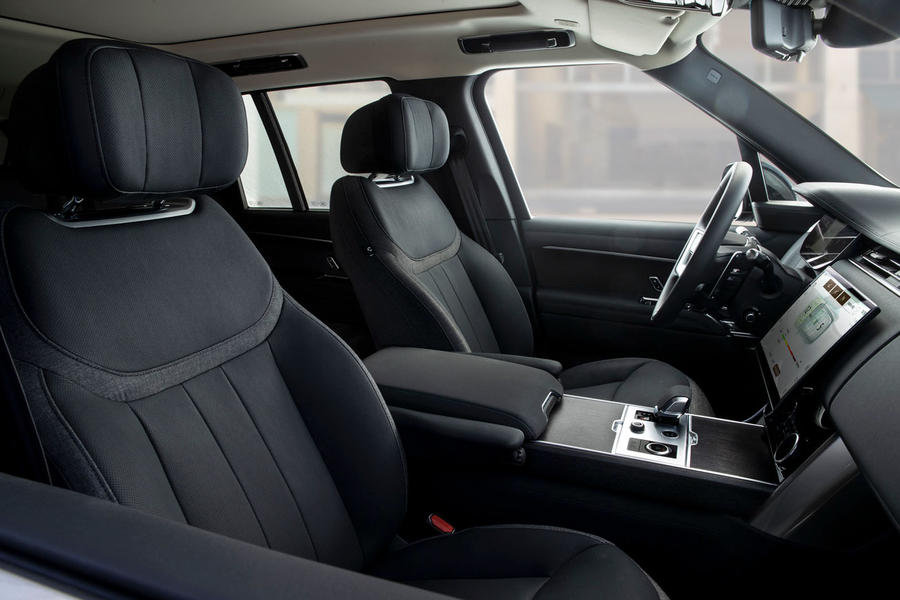 How does the Range Rover drive?

I drove several variants across a morning, starting with two long cars and finishing with two short ones.

With the previous-generation Range Rover, I tended to think the short ones were the better cars. Sure, we tested a long one with some posh options against a facelifted Bentley Bentayga recently and it came out on top, and Land Rover will have hardly (you would hope) made it worse with an all-new model. But still, I thought then that the sweeter spot in the Range Rover, er, range, was further down it.

I still think so after a drive in a new P400 LWB and then a long SV model, trying it in both the back and the front seats. Every variant that I tried had 23in rims shod with 285/40 tyres.

Starting with the LWB, though, is a little inauspicious. Its issues are twofold. For one, if you’re in the back, I’m not sure the ride is up to the job. It’s mostly flat and contained and controlled but gets caught out – as air suspension sometimes is – by sharply poor surfaces and expansion joints.

From the front, things are better, but there’s still a niggle. The steering is beautifully smooth and accurate and the other controls weights spot on. Isolation is good (those thumps that affect the ride in the front too aside, although they’re less noticeable from behind the wheel) and noise levels are really low. But there’s something about the way it steers, turns and balances its body movements that doesn’t feel natural.

There are a lot of chassis facets and technologies at work, and while it’s impressive, and in a way that most passengers and a fair few drivers won’t really notice, you don’t quite always get back the amount of turn you asked for. It’s subtle. It’s fundamentally good, but it feels like it wants a bit more finessing.

Given there are so many powertrain options, there are two lengths and JLR is a relatively modest size on global terms, maybe it’s understandable that the variants don’t impress equally.

If the long one doesn’t quite hit the mark, roll up the short one. It melts the doubts away within about five corners.

I drove a P530 and then a D350. The P530’s BMW-sourced V8 is a real peach, but, like the Defender’s V8 (a different engine) does feel a bit ‘not made for the British’.  It’s lusty, smooth and alluring, but you’re probably not going to buy one, because it its First Edition specification it costs £140,420 before options and returns 275g/km of CO2.

The D350 is more palatable, although these things are relative: it costs £108,775 in HSE form and emits 205g/km. But the Ingenium 3.0-litre straight six thrums away nicely and, paired with an understated interior, feels like the most old-school version of the new Range Rover and the most appealing: a car that would be happy to go from farm to Glyndebourne.

But it’s not just the ethos behind those two short variants that works. It’s that all of those disparate chassis technologies really feel like they meld together and bond. Whatever you put in, you get back, without delay or over-compensation or weirdness. All of the systems just hang with each other and contribute to a car that’s good. Thoroughly good. Could even be great.

That said, there was a little wind noise in one car (perhaps due to pre-production seal issues, perhaps not) and the ride would be improved again with some more sidewall on a smaller rim. Maybe it would breathe a touch more easily. But still: this is some car.

The engineers think wind roar is noticeable because the ride and engine isolation is fundamentally so good. We will find out for sure when we get a car in the UK. But at no point do you have to go beyond a muted voice to make yourself heard to a passenger.

It’s curious really, though. I can’t remember the last time that I felt quite such a difference between variants in the same model range. And I wonder whether, if Jaguar’s new XJ limousine had been allowed to make its way to fruition, Land Rover would have decided that it didn’t need a car to ferry rear passengers quite as much as the Range Rover is being asked to.

The ‘capability’ that they belatedly got around to? Well, I didn’t off-road much – just some steep gravel tracks with switchbacks that genuinely showed off the impressive small U-turns the car can make.

And while our off-roading was light, it felt good. It maintains the same sort of aloofness as the Defender, being happy for you to play and indulge if you want to but fundamentally capable of sorting out the off-road shenanigans by itself. You sit back and relax as you check the fencing in the far field, then come home, slip on something less comfortable and climb back in for a night in the West End.

The Mk6 Range Rover really works that way. I’m not quite so convinced of its credentials as a standalone luxury passenger-mover. Maybe JLR could have done with that new XJ after all. But in its purest form, the latest Range Rover is still the best at what it does.

I will go with a star rating and verdict on the version of it that I think is best. On that basis, we give it 4.5 stars.