BACK TO ALL NEWS
Currently reading: Porsche and Tesla shine in NCAP crash tests
UP NEXT
New Mercedes-Benz EQA revealed as sub-£40k electric crossover

The new Porsche Taycan has scored five stars in the latest round of Euro NCAP crash tests, coming second only to the Tesla Model X in its category ratings.

The Taycan, tested in entry-level 4S guise and equipped with the Performance battery package, scored above 80% for both adult and child occupant safety, with Euro NCAP stating that “a similar level of protection would be provided to occupants of different sizes and to those sitting in different positions”.

The Tesla Model X, being tested for the first time since its UK launch in 2016, follows in the footsteps of the newer Model 3, which also achieved a five-star rating this year. Euro NCAP praised the electric SUV’s autonomous emergency braking system, claiming that collisions were “avoided or mitigated in most cases”.

The Volkswagen Sharan and its Seat Alhambra sibling achieved four stars, with the Sharan penalised for a poor performance in the ‘side pole test’, in which the left-hand rear door detached during the impact, presenting what safety and security experts Thatcham described as "a risk of occupant ejection”. 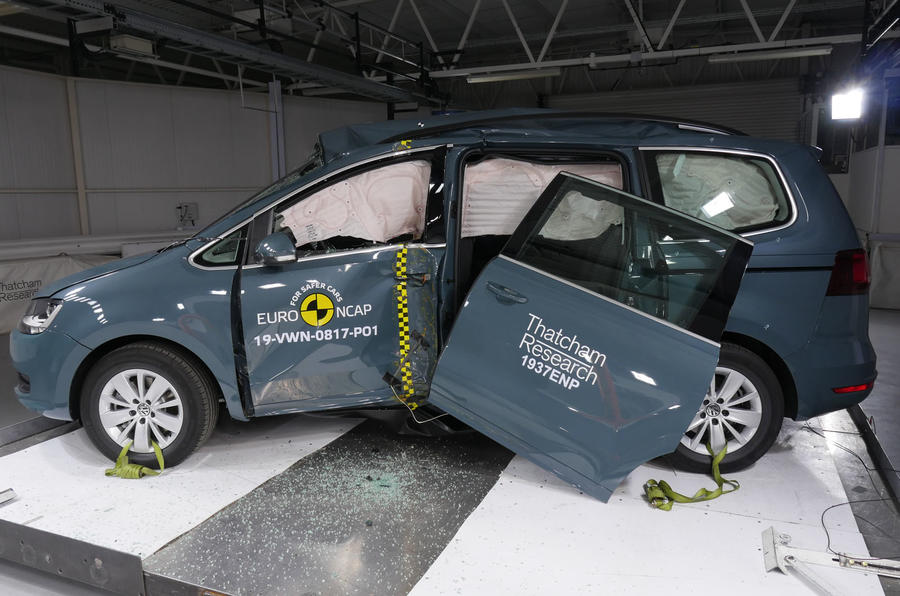 NCAP stated that, although the platform-sharing MPVs have been on sale in their current form since 2010, “the VW Group has done a fine job in keeping them up to date in terms of safety, with the addition of autonomous emergency braking and rear seatbelt load-limiters”.

Rounding off the latest round of results is the facelifted Jeep Renegade, which scored three stars, making it the only car to achieve fewer than four stars in 2019. The small SUV’s low overall score is attributed largely to a 55% rating for its ability to protect vulnerable road users. Unlike the other models tested, autonomous emergency braking is not fitted as standard to the Renegade.

Euro NCAP secretary general Michiel van Ratingen said: “Well done to Tesla and the other five-star performers for not only bringing best-in-class performance in testing but also for making safety systems accessible and standard across the European market.

“It is also good to see manufacturers – Ford and Volkswagen in this case –standardising AEB and keeping safety up-to-date even for older cars, to the benefit of their customers.”

The next round of crash test results will be released on 18 December 2019.

Tesla came first by a big

Tesla came first by a big margin, yet this Autocar article does not indicate that and instead tries hard to imply that Porsche is the star. It's despicable how Autocar bows down to VAG and their money. This site has been bought off.

What do you expect from

What do you expect from autoprat magazine

mustnt piss off the advertisers

First, it wasn't a race

Second, did you even read the article?

not to buy a Jeep.

The Taycan was behind at 85% for adult passenger protection

The Tesal also came 1st for safety assist at 95% while the Porche only scored 73%.

Tesla have done well for a car that was designed 6 years before the Taycan.

Not bad at all