Tesla's Model 3 has been awarded five stars in the latest round of Euro NCAP safety tests, after achieving one of the highest scores ever recorded by the organisation.

The Model 3 also earned a perfect score in the frontal offset deformable barrier crash test, which has been synonomous with Euro NCAP testing since it was created in 1997. This was largely down to the cars's skateboard chassis layout, which creates a low centre of gravity, and the absence of a combustion engine, which could otherwise have the potential to intrude on the passenger compartment in the event of a collision. 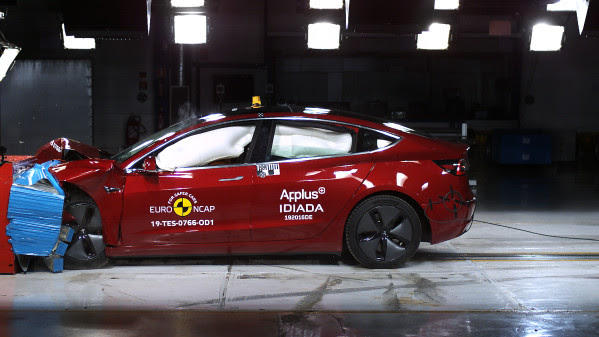 “The Tesla Model 3 achieved one of the highest Safety Assist scores we have seen to date," Matthew Avery, Director of Research at Thatcham Research, said of the results. "Its Collision Avoidance Assist system is first class. Tesla has done a great job of playing the structural benefits of an electric vehicle to its advantage."

The latest batch of tests also yielded five star scores for the new Skoda Scala, which scored highly for adult occupant protection. This places it amongst the highest rated family hatchbacks, including the Mercedes A-Class and latest Mazda 3.

Mercedes recieved five star scores for both the B-Class and GLE SUV. The new Kia Ceed and DS 3 Crossback were each rated four stars when fitted with standard equipment, but earned five star scores once optional safety packs had been fitted.

"Our tests get tougher and tougher, and cars continue to perform well," Euro NCAP secretary general Michiel van Ratingen said. "Car-buyers are getting an ever-safer range of vehicles to choose from."

Why safety tech and speed limiters can’t save us all​

Tesla would need to be very safe in a crash because you're highly likely to have a collision in one due to the woeful ergonomics. When will manufacturers wake up to the fact that it is dangerous to use a touchscreen interface for important functions when you're driving? There's not much point spending millions developing fancy electric technology when you can't get a basic grasp of even the simplest ergonomic principles. The supposedly safety-first Volvo have stupidly followed Tesla down this route. They keep saying how no-one will die driving a Volvo by 2020 or whatever but it'll be other road users that will be dying when they get hit by the Volvo driver who's fiddling with a touchscreen as they try to adjust the A/C.
xxxx 4 July 2019

Well it's cheap to run, cheaper to buy, doesn't look like ajust another 3 series rep mobile and quicker than an M3 round the TopGear test track

Buying with your Wallet or with your Heart?, it ain’t a pretty thing to look at, and really you’d want the top of the Range, but that’s.....a lot of money for something that doesn’t stir the emotions.

For Peter Cavellini, it seems

For Peter Cavellini, it seems only a steam engined car will do...