BACK TO ALL NEWS
Currently reading: New 2019 Ford Mondeo revealed with tweaked looks and extra tech
UP NEXT
2024 BMW X3 primed to take on Mercedes-Benz GLC

Ford has released details of a facelifted version of the Ford Mondeo hatchback, saloon and estate range, with the hope of reviving its appeal in the ever-declining large mainstream car market.

The Vauxhall Insignia rival has been given a mild exterior redesign, with new grille designs specific to each trim level, revised bumpers and a new LED running light design. At the rear, reshaped taillights and a full-width chrome strip feature, while new personalisation options are added.

The biggest mechanical change is the fitment of Ford’s latest EcoBlue diesel engine, meeting the latest emissions regulations with a selective catalytic reduction system. It’s said to be more refined thanks to technical enhancements including a new high pressure fuel injection system, while low-end torque is also enhanced. It’s available in 148bhp or 187bhp forms.

As confirmed last year, the Mondeo estate will also new be available with a hybrid version for the first time. Expected to account for 50% of sales, the petrol-electric model uses the same 184bhp 2.0-litre Atkinson cycle petrol engine mated to an electric motor, generator, 1.4kWh lithium-ion battery and CVT-mimicking automatic gearbox. The estate is expected to emit 103g/km of CO2 once homologated. Boot space for the hybrid estate is reduced from 525 to 403 litres with the rear seats in place. 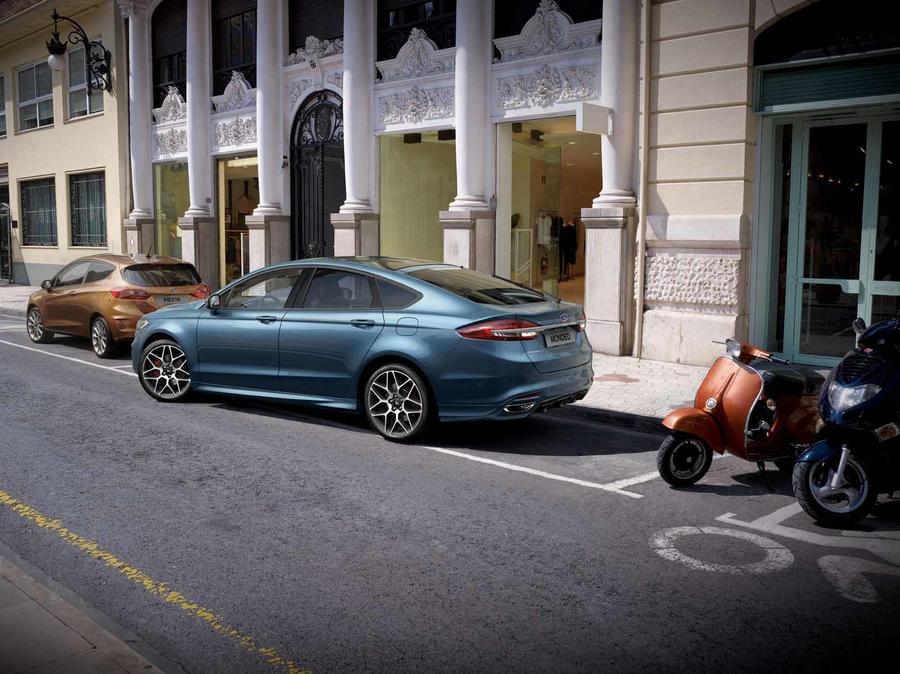 Inside, new upholstery choices, decorative trim inserts and door handles feature, while Ford claims centre console fit and finish has been improved. A rotary dial gear selector has been added to models equipped with the eight-speed automatic gearbox, freeing up additional storage space and charging points. The gearbox itself has also been revised to offer adaptive shift patterns.

New technology includes a Stop & Go function added to the adaptive cruise control, automatically bringing the car to a halt and pulling away either automatically if the driver is stopped for less than three seconds, or with touch of the ‘resume’ button if stationary for longer.

The intelligent speed limiter system, first added to the Ford S-Max and Ford Galaxy, is now available in the Mondeo, automatically adjusting the car’s speed when a new limit is detected. The existing SYNC 3 infotainment and navigation system is unchanged.

I ended up driving a dull-looking underpowered 1.6 diesel Passat because Ford decided to make a D-segment estate with a trunk that’s too small. And trust me, it’s not a size wars - mine is frequently full!

This looks like a bloated version of itself, previous versions have been handsome almost coupe-ish and purposeful, more rakish. Not keen on this face lift. It's a shame if this is the mondeos last hurrah, as it isnt going out looking its best, though I'm sure its still a good car.

Not a bad car at all, but

Not a bad car at all, but Ford have been too late. I'd still have this over the mediocre Kuga though.
View all comments (21)