From £24,0958
Share review
We drive Skoda's top-flight special edition of the Octavia vRS to see if it's worth splashing out on
Share
Open gallery
Close

We’re already plenty familiar with this generation of Octavia vRS. It’s been on sale since 2013, after all, and is entering its twilight years after a round of updates in 2017.

Theoretically, it remains Skoda’s most appealing offering to the keen driver: we say theoretically, because Skoda still refuses to ‘vRS-ify’ the flagship 276bhp, four-wheel drive Superb, so, while it is faster than the Octavia, it remains a less engaging steer. The Czech brand will also now sell you the Kodiaq SUV in its sportiest trim line, if such a thing is your cuppa.

But the wrinkles are starting to show, particularly when the Octavia hatchback finds itself lined up with fresher-faced, faster and more thrilling alternatives like the Honda Civic Type R. That’s why Skoda is upping the value stakes with what can be considered a run-out special - the vRS Challenge - given that an all-new Octavia is due before the year is out.

Don’t make the mistake of hearing ‘Challenge’ and think about hardcore special edition Ferraris of yesteryear, however. This petrol-only special is more a case of bunging in the most popular options, raising the asking price by a bit and pointing out how much you now get for your money.

So, in comes niceties such as heated, electric and Alcantara trimmed vRS sports seats, the DCC adaptive suspension, parking sensors, a sports exhaust and 19in wheels. Skoda claims that lot would set you back £4500 if you ticked the boxes on a standard vRS yourself. Instead, this is £2,500 more than a stock one.

We've driven the estate here (another £1,200) and one fitted with the optional seven-speed DSG gearbox (another £1,070). Skoda can’t really be thought of as the VW Group’s value brand at this end of the market…

(Note - no, your eyes haven't deceived you - time constraints and a lack of press images meant we've had to use images of the hatchback for this piece). 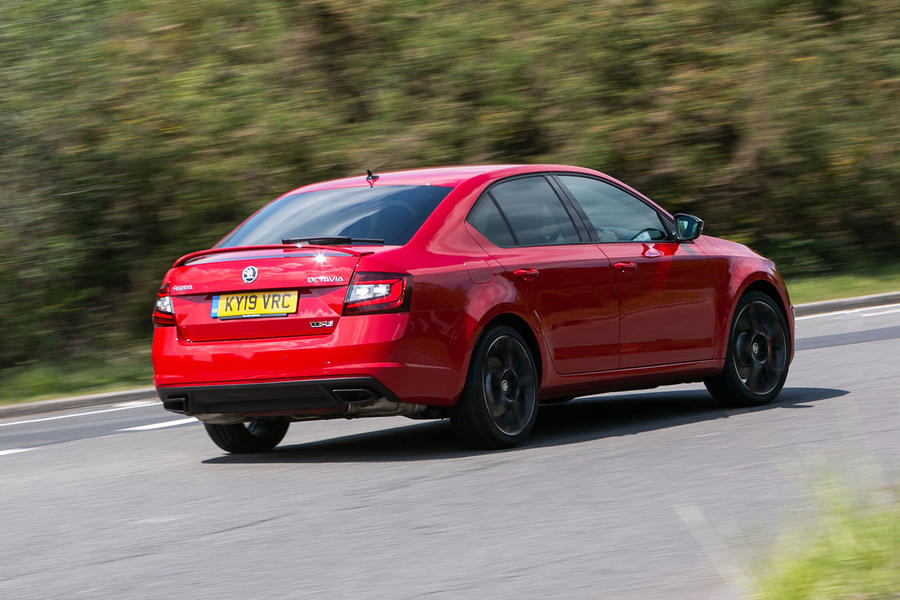 Where the vRS hatchback, in 2019, finds itself in the uncomfortable position of being slower and less exciting than the hot hatch elite and not significantly more versatile, the estate has that latter USP nailed.

Like every Octavia estate since the nineties, today’s generation occupies the price point of a C-segment offering but isn’t far off the D-segment for outright space and usability. There’s always been a cool, heart-and-head appeal associated with the load-lugging vRS - particularly when its roof bars are laden with all the lifestyle gear parents with a bit of lead remaining in their pencils are often seen with.

The Challenge doesn’t alter the recipe very much. But many of the kit additions are welcome, and it's the Dynamic Chassis Control the stands out in particular. Like it does in many of the VW Group’s performance models, it elevates the Octavia’s damping sophistication near to the level expected of the best in this class.

Without it, particularly when paired with the ‘Xtreme’ alloy wheels Challenge spec brings in as standard, it’s too disturbed by broken surfaces and too harsh around town for what is meant to be a less hardcore, everyday-use hot estate. With it fitted, only the deepest potholes and mid-corner surface intrusions can upset it, and most of that is due to the relative lack of sidewall.

Conversely, select Sport for the dampers, steering and engine response and the Octavia feels, as perhaps is expected, like a slightly heftier Golf GTI. And that’s a good thing. It expertly balances refinement and composure with fine agility and tenacious grip. The former is, in part, thanks to the superior body control DCC brings in, while the latter comes courtesy of the familiar electro-mechanical front diff.

One potentially divisive new feature on the Challenge is the “sports sound” exhaust. Paired with black exhaust tailpipes, the system uses the usual synthetically pumped-in engine note to give a harder edge to the rather muted powertrain in Sport or Individual mode. It it isn’t to unnatural for this tester’s tastes, although it’s more subtle than the boisterous pops and bangs of a Hyundai i30 N, and the on-throttle drone means you’ll turn it off for motorway runs.

It complements the tried-and-tested EA888 2.0-litre turbocharged engine, making 242bhp as it now does in every Octavia vRS. It’s a smooth, torquey and linear, if undramatic, powertrain with the DSG gearbox, though this tester would prefer the interaction and sensation of the manual.

Despite being down on outright straight-line pace compared with many rivals, there’s ample performance served up to entertain and in-gear pace is strong. And - most importantly for some - ease off and it becomes brilliantly refined and surprisingly frugal, with 40mpg easily within reach on a cruise. 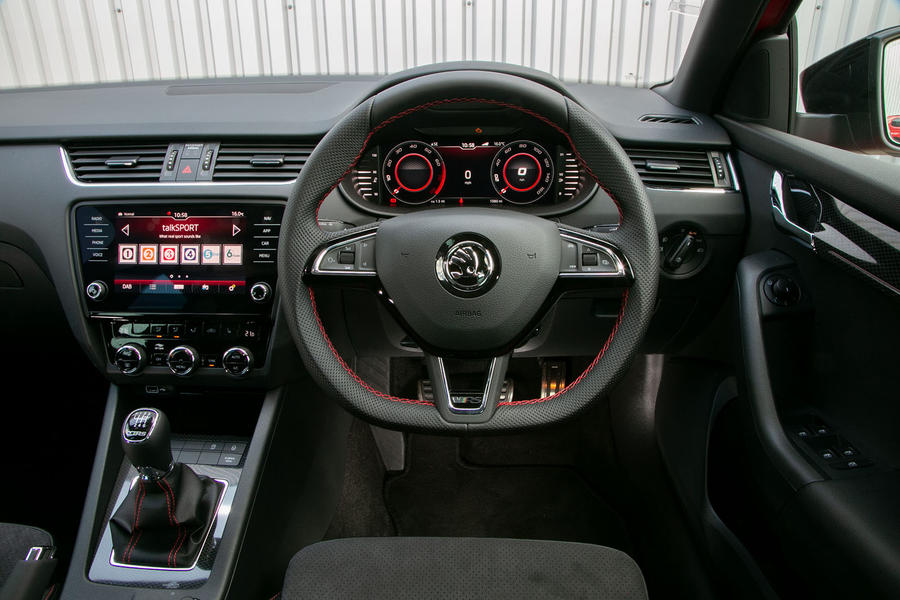 Advancing in age it may be, but those who discount the Octavia vRS because it’s not the most cutting-edge model or the fastest on paper will be missing out. There’s still little else around in this segment that so compellingly balances everyday drivability and refinement with just about enough driver engagement, all the while offering impressive practicality and all the quality and ergonomic soundness you’d expect from a VW Group product.

The only argument to be had is whether or not Challenge spec is the one to go for. It seems pricey on paper - “That’s Golf R money” I hear you shout. But the Golf’s price has crept up steadily over the years, meaning you’d be looking and the thick end of £40k for an estate with all the kit found on the Challenge.

In all honesty, we could easily live without the Challenge extras and just spec a normal vRS estate with DCC. But if it comes down to an extra tenner a month on PCP, then why not go all-out? 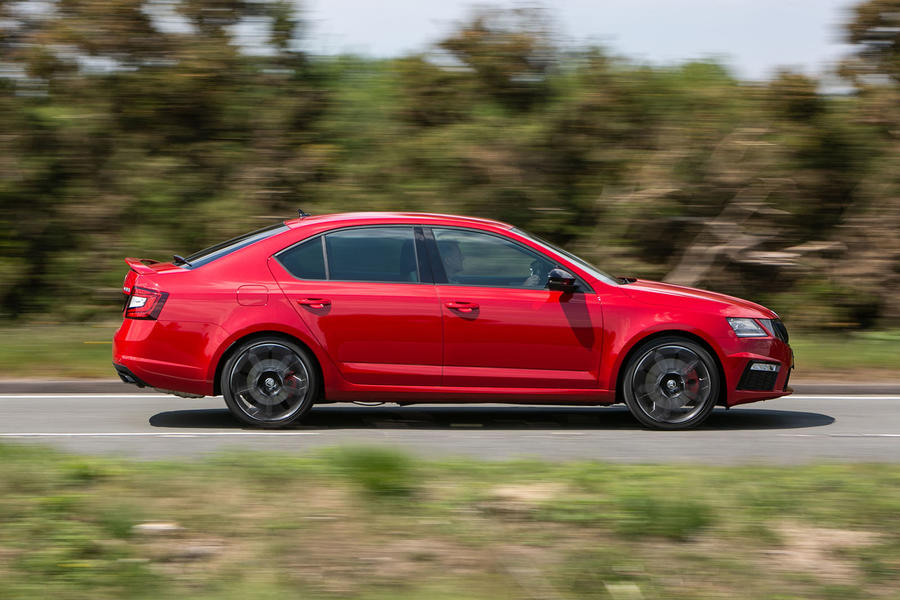 Thanks for your information and you shared a useful post.  Check this ac market for more updates.

As is usual, you are very perceptive, and will agree no doubt, that it is a tribute to the depth of engineering talent within the group and Škoda specifically, that a 'parts bin' car  (your words) can be  better than most competitors.