From £26,7108
We drive the hatchback version of Skoda's most powerful Octavia on its standard-fit, non-adjustable dampers. Is this the best-value option of the Octavia vRS on sale?
Open gallery
Close

A grey Skoda. Not the most tantalising of propositions. But this one has the same 242bhp engine and electronic locking differential as the Volkswagen Golf GTI Performance, making it the most powerful Octavia to have made production yet. My colleagues have already driven the model in estate form and with optional dynamic chassis control (DCC) suspension but, this time, we’re in a hatch suspended on the vRS’s standard dampers, which, perhaps surprisingly, come fitted to 95% of vRSs.

Experience suggests that this less practical, less adjustable specification will fall short of offering the USP its more broadly talented sibling flaunts. But consider this: the hatch costs £1200 less than the estate and not opting for DCC saves £850, which equates to a sum hefty enough to represent 7% of the car’s £27,595 starting price. What you’re looking at here, then, could well be the best-value (read: most Skoda) vRS 245 available. The bargainist rocket on sale, perhaps?

Take a look at the car’s lengthy standard specifications list, which is far too long to show in full here, and that theory stands strong. Compared with the already generously equipped regular vRS, the 245 gains 19in gloss black wheels as standard (an inch larger than the vRS's) and Alcantara-wrapped sports seats, which also come with electric adjustability as standard. A colour multifunction trip computer, complete with a lap timer (how very un-Skoda), is added to the infotainment armoury, which is centred around an Amundsen 8in satellite navigation system offering integrated wi-fi.

All this stuff matters in the 245 because it ensures the model’s price will continue to give salesmen of less liberally furnished rivals a headache. But what will really grab the attention of prospective buyers is the car’s mix of performance and space. Volkswagen’s familiar 2.0-litre four-pot TSI can charge the vRS 245 from zero to 62mph in 6.4sec,which is only two-tenths off that of the £29,680 Golf GTI Performance, yet boot space in the hatch remains a class-leading 590 litres with the seats up and 1580 litres with the back bench down.

On paper, then, there’s little reason for someone who can only afford to purchase an option-light vRS 245 hatch to feel jealous of another with a few additional extras. But does that ring true on the open road? Only one way to find out… 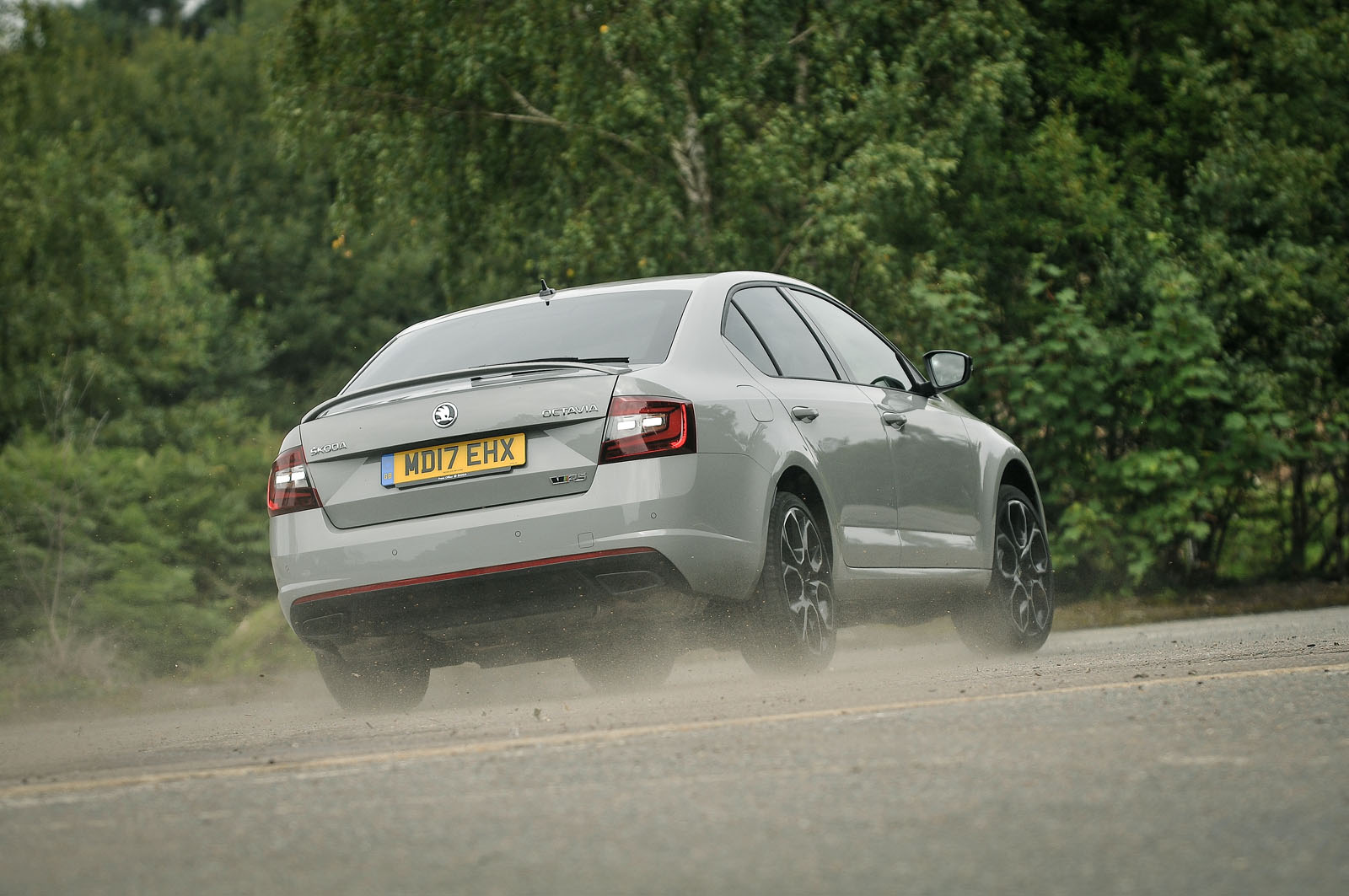 The vRS was already the Octavia most comfortable in its own skin, even in quad-light facelifted form. You’d be hard-pressed to call the car lairy, but this no doubt adds to its appeal among buyers after a more discreet choice.

The story is much the same inside, where a familiar Volkswagen Group dashboard and buttons are functional and smart, while the infotainment touchscreen, complete with Apple CarPlay, Android Auto and touch-sensitive buttons, is responsive, quick loading and of pleasingly high definition. It remains the segment’s easiest-to-use system. What sets the 245 apart, however, are those front chairs, which contrast the mature cabin with their more racy, youthful design. In the 245, they’re heated and the driver gets memory foam – a big win for those often faced with long journeys.

Start the motor up and, in Normal mode, the car takes the form of an effortless cruiser with a start/stop system that, if you leave it on, is so active that it switches the engine off before you’re completely stopped. Venture onto the motorway and the strong mid-range grunt, headed by 273lb ft of torque that’s available from just 1600rpm, makes for rolling acceleration that feels far stronger than the numbers suggest. Few four-cylinder engines can match the tractability of Volkswagen’s 2.0-litre TSI. It quietens down when cruising as well, but this leaves you to focus on the ever-present tyre noise generated by the car’s 225-width Pirelli P Zero boots.

Our car is equipped with a seven-speed DSG gearbox, which is a £1390 option that's unique to the 245 because the regular vRS has to make do with its old six-cog predecessor. Left to its own devices, it responds well to throttle changes and kicks down swiftly. Switch the driveline to Sport mode and the car goes through a transformation. The engine note deepens, the steering weights up and the throttle becomes more responsive. The DSG 'box also hangs onto gears for longer, keeping the crank spinning within easy reach of 5000rpm, where peak power lives.

There are no changes to the way the car rides, however, with no standard-fit adaptive dampers to influence body roll here. As such, the car remains fidgety over road imperfections and crashy over larger bumps. Really press on, and this is surpassed by a loafy feeling, with the structure struggling to stay hunkered down over crests and traction at the front hindered as a result – although drive out of corners is vastly improved with the car’s electronic differential, which imitates a mechanical system by braking the slipping wheel.

Like the gearbox and steering, the diff can be cycled through three stages separately in Individual mode. In its most aggressive setting, it noticeably impacts the car’s line, pulling it towards the inside. This is particularly useful because, without it, the car’s tendency to push on would dominate further. Take the traditional hot hatch approach of entering a corner off throttle expecting an adjustable rear and you’ll be disappointed. Skoda has widened the 245’s rear track by 30mm in a bid to improve stability, but the knock-on effect is it robs the car of agility – something that was never a strong point for the regular vRS anyway. The most rewarding cornering technique in the 245, then, is to lean on its effective electronic differential by powering on early. Progress is fast and therefore somewhat rewarding, but it lacks the peaks of excitement provided by more agile alternatives. 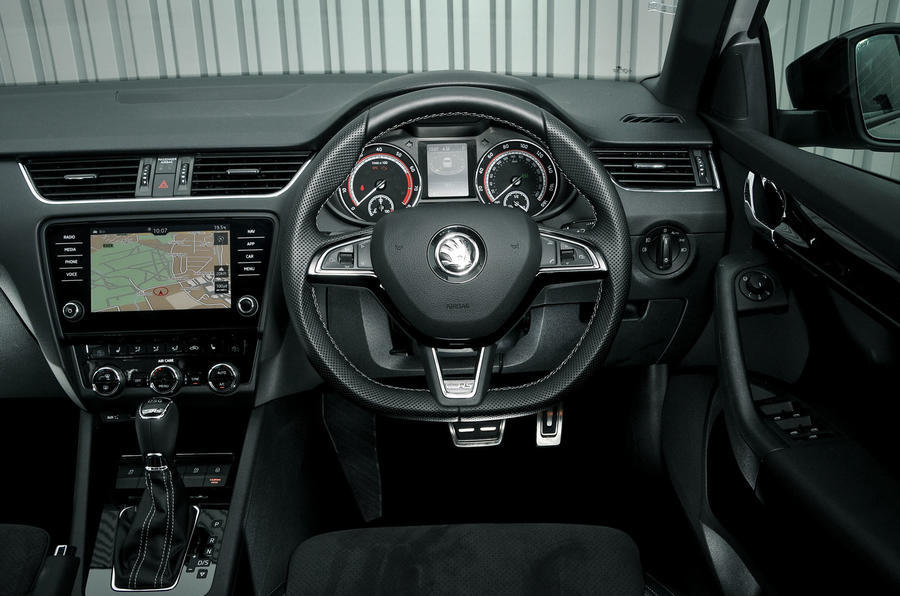 No. At least not one in this spec, anyway. It's by no means bad, but if you want the best Octavia vRS 245 experience, make sure you tick the option box for the DCC suspension. Without it, the car can’t quite make its mind up as to what it wants to be. With it, you’re offered a wide window of options that are able to satisfy those after comfort and those wanting poise. And since most of these will be sold through PCP deals, the added premium will equate to an extra pint of overpriced craft beer (should that be your thing) a week. So it’s easily justifiable - and a real surprise that more people haven't ticked the DCC box.

Whether you should opt for a 245 over rivals such as its group stablemate, the Golf GTI Performance, or models such as the Ford Focus ST, will be based entirely on preference. If you rank value for money, practicality and point-to-point pace above all else, you need look no further. If you’re after a more engaging package, the vRS can’t quite challenge for class honours. 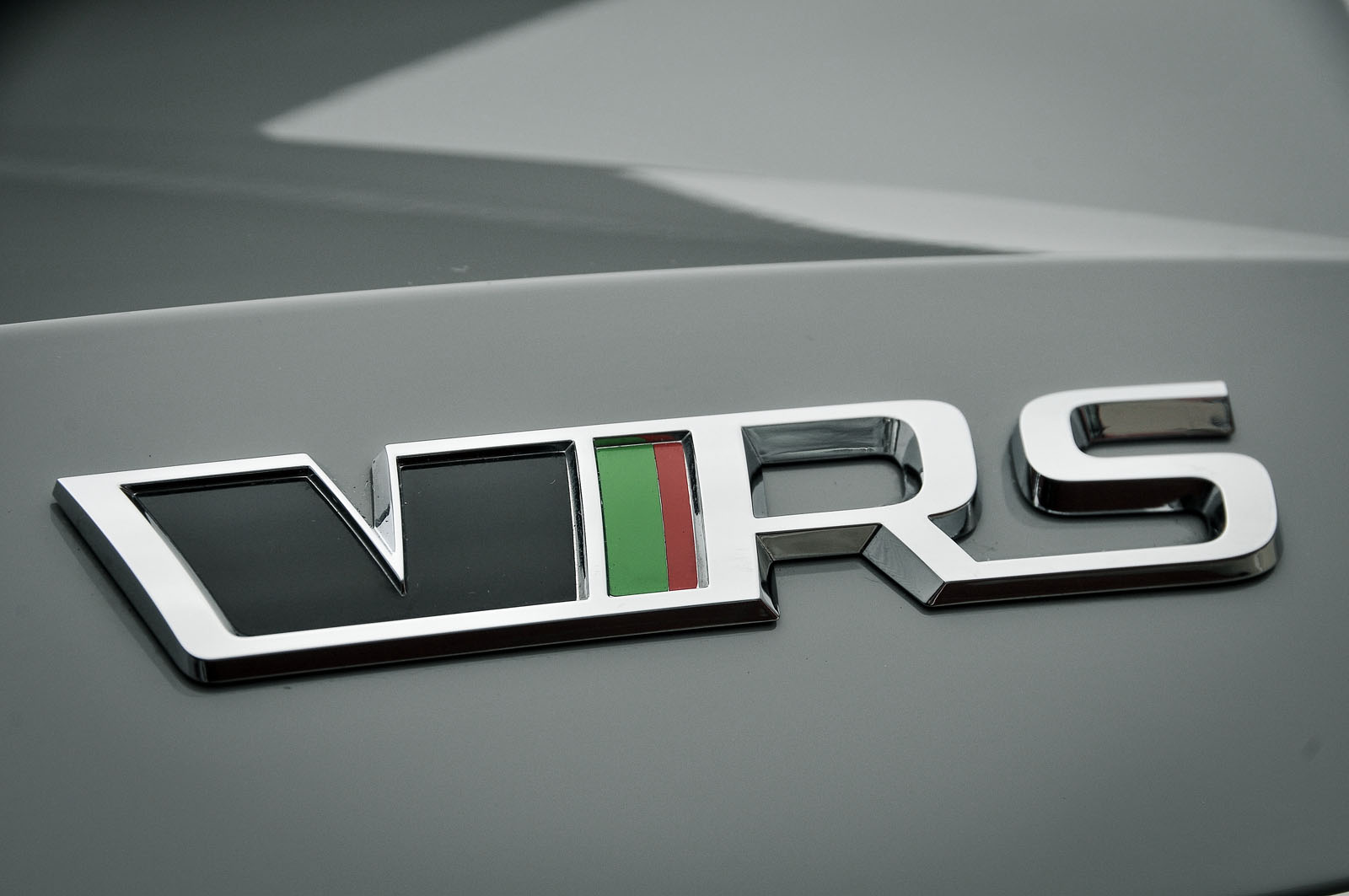 Not worth my 4 stars

Generally, the car performs well in terms of drifting and speed buh it shouldn't be rated that high (from my own point of view though)

Please re-read the headline, it's most powerful Octavia, not Skoda.

As for VW & Audi transmissions, VW's DSG = Audi's Tiptronic. Audi's most powerfull cars get the 8-speed Tiptronic transmissions, the same ZF torque converter unit that can be found in other cars with North - South engines.

With the low weight and decent bhp and torque, the Soda should be quicker. The car doesn't match the VRS badge.