From £25,8459
Subtle changes to VW’s hot hatch icon are good news for a car that needed little fixing; it's one of the most expertly judged and complete performance machines you can buy
Open gallery
Close

Elsewhere in the range, the revision’s headline changes are new 1.0 and 1.5-litre TSI petrol engines that give better fuel economy and lower emissions to the petrol side of the car’s armoury. There are new infotainment, active safety and semi-autonomous driving technologies, too; new equipment; and some pretty minor exterior and interior design tweaks restricted mainly to the bumpers and lights.

Had the dieselgate scandal not forced VW to slash at least a billion euros in annual R&D spending just over a year ago, of course, you wonder if we’d be looking at a more widely revised car here. Handily for VW, there wasn’t much wrong with Golf Mk7 in the first place, the car having been immovable from top spot in our family hatchback class rankings since its introduction in the UK in 2013.

And, since VW was good enough to include it as part of its European press launch this week, the revised Golf GTI provided our introduction to the various new components of the revised Golf range. The formative, original hot hatch has been a useful telltale for the general wellbeing of the fast front-driver since its introduction four decades ago. It’s also the Golf that most of us most care about. 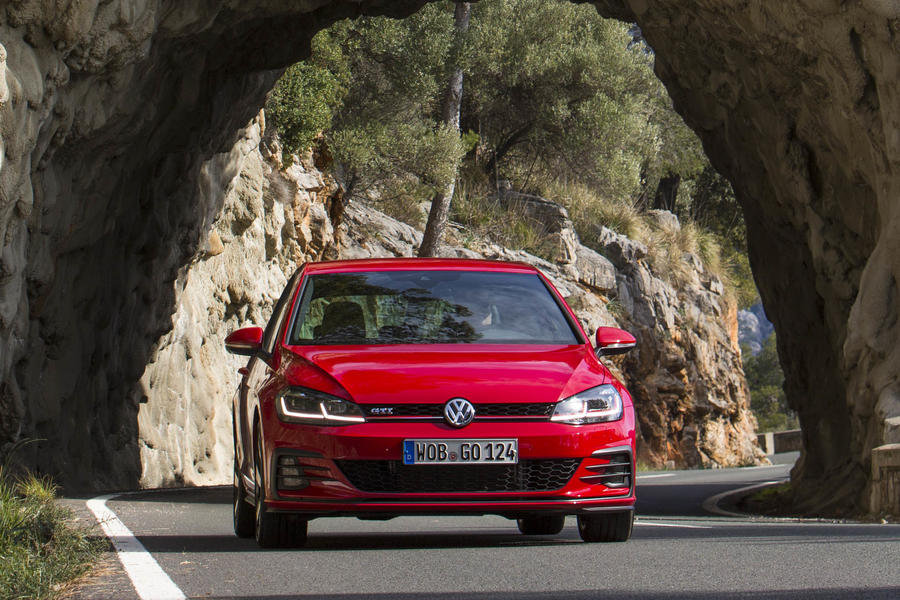 The GTI is in fine fettle. In material terms, at least as far as most petrolheads would care, it hasn’t changed much. But considering how much the hot hatch market has transformed around the GTI of late, it’s probably a bolder move on VW’s part to leave the car so unaltered than it might have been to follow the crowd, by dialling up the horsepower, chassis rates and price tag. Thank heavens they didn’t.

Volkswagen has pumped up the GTI’s power output by just 10bhp – enough to cut its 0-62mph acceleration claim by a solitary tenth of a second, and to add just 2mph to its top speed. That gives the standard GTI’s 2.0-litre turbo engine the same 227bhp peak of power that the outgoing GTI had when fitted with VW’s optional Performance Pack.

A new Performance Pack will be launched for the facelifted car later this spring, boosting the GTI’s power to 242bhp and likely adding the same electronically controlled slippy diff to the car’s specification, along with one or two other things. The standard GTI, meanwhile, continues with the same variable-rate ‘progressive’ power steering rack as before, and the same passive sports suspension, which can be upgraded to adaptively damped Dynamic Chassis Control suspension for an extra cost. 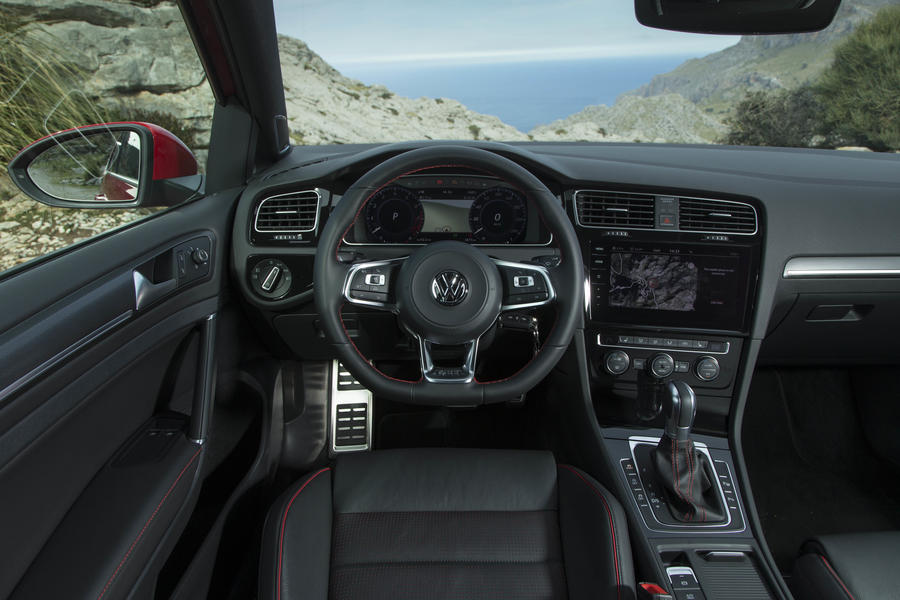 A pair of excellent leather sports seats, decorated with some attractive new red piping, awaited in our test car. It was also fitted with the Golf’s new top-of-the-line 9.2in Discover Pro infotainment system and its new 12.3in digital instrument cluster: like the leather seats, the former is optional-fit. The central infotainment set-up has a bright, crisp-looking widescreen display and, for the first time in any car this size, is navigable via gesture control. However, I’m not sure it’s an unqualified improvement on what went before, VW having dropped the handy rotary knobs for volume control and map zoom and switched to a touchscreen-dominated control logic that can be fiddly and distracting. The new digital instruments aren’t as impressive-looking or easy-to-customise as they are on Audi’s Virtual Cockpit, either, although they’re still pretty good. Otherwise, the GTI’s cabin is almost unchanged. Material quality is high, the driving position is excellent, interior space is good; the attention to detail lavished on the underlying product – the humble Golf – really shines through.

So, in a segment now busy with more powerful rivals from Ford, Peugeot, Seat, Honda and others, how can the Golf GTI make 227bhp feel like it’s enough? Well, just as before, it’s by the quality and linearity of the power delivery. This is an engine sufficiently responsive, consistent and free-revving that, by comparison with the more highly strung motors you find in rivals, it barely feels like it's breaking a sweat in motivating the hot Golf up to what can still be a very brisk pace indeed. The GTI is more than fast enough for the kind of cross-country roads with which hot hatchbacks were once intrinsically linked. I’d probably prefer one with a manual gearbox, although the six-speed DSG automatic in our test car proved itself a strong, rounded and quick-shifting option for those who like the idea of paddleshifters on a hot hatch.

What defines the GTI’s point-to-point pace and its capacity to engage its driver much more than its power output on those give-and-take roads, though, is its excellent, poised-yet-absorptive suspension. Because, while rivals turn to ever-firmer springing - either to put ever-greater power levels onto the tarmac, or for ever-more-direct and increasingly over-cooked handling directness, or both – the Golf sticks with the same sweet dynamic compromise that VW has been refining for four decades. 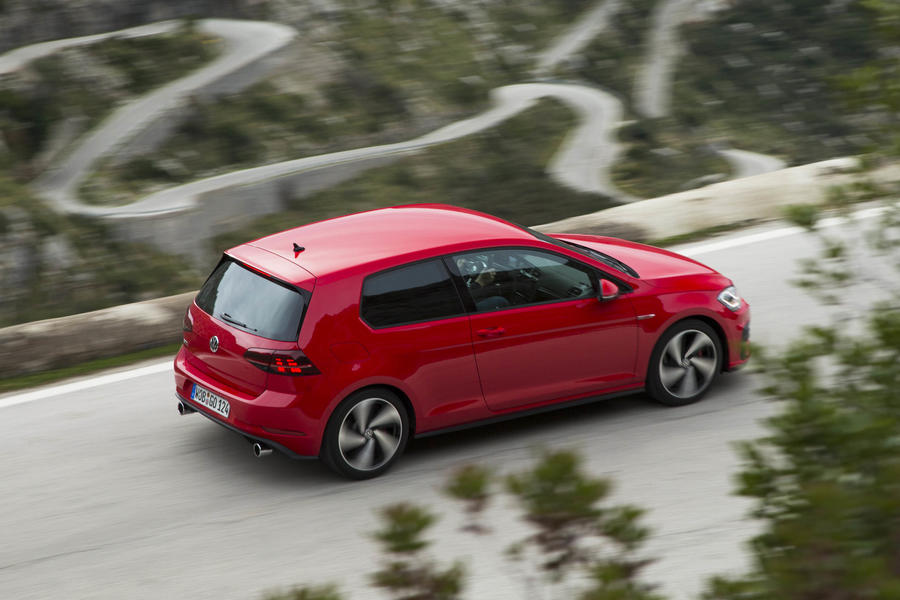 The GTI knows how to handle a bump. Our test car’s adaptive dampers delivered its body control and handling alertness up to a nicely compelling level when ramped up to ‘Sport’ mode but even there left room for some suppleness, and kept the car stable and settled at all times. So you can drive the GTI hard over a really testing surface of cambers, hollows, lumps and sharp edges, and it takes every single one in its stride. The chassis filters out so much more than plenty of others would, but then keeps the car keen, adhesive and balanced through bends and gives you nothing but confidence to enjoy yourself.

The GTI isn’t the kind of car that forces its own contrived presence between its driver and the road, and it steers with much greater feedback and more coherent weight now (thanks, you suspect, to the Clubsport S’s legacy) than ever it used to.

There are more exciting rivals when you're on the limit; that’s undeniable. But the brilliantly judged sweetness of the Golf GTI’s ride and handling compromise, plus its remarkable completeness not just as a driver’s car but as a premium product, continues to demand consideration by those who want a hot hatchback cooked with a classic recipe.

This is a car positioned at the nexus of value, desirability, usability, road-appropriate performance and dynamic sophistication, and accessible driver reward. And, since an increasing number of once-great hot hatch-purveying car makers appear to have forgotten as much - as if this car's incredible forty-year success story didn't make it plain enough - that’s exactly where a hot hatch ought to abide.

I thought this 6 speed was phased out with the facelift and all dsgs in the Golf are now 7 speed?
Jimbbobw1977 4 February 2017

As competent as this car is, it just seems to lack character - something to make the owner feel attached to or love. It seems to do most things well in the review.

The other thing is image - The Golf and Audi A3 has taken from Ford and Vauxhall as the chavs choice of car. Years gone by you would see the boy racers in Fiesta zetec S or Corsa with the lowered suspension and booming music, I now see Golfs and A3's like this....

You have to acknowledge, however grudgingly, the Golf GTI's remarkable longevity in the hot hatch segment - its blend of usable performance, well-judged dynamics, restrained styling and good material quality has stood the test of time and the vagaries of automotive fashion. Some will argue the Golf is boring and is being displaced by rivals but given the chance I'm sure every mass-market manufacturer would love to be in VW's position.

As an aside I expect VW to further cement their lead at the top of the sales charts over GM and Toyota this year. It seems not even dieselgate can stop them.