One may get top billing as the trackday star while the other plays second fiddle as its road-ready counterpart (you can guess which is which), but in mechanical terms, these are the very same sports car.

That's exciting, because for all its exoticism, never in two previous iterations has the Spyder been engineered by Porsche’s GT division at the Motorsportzentrum in Weissach. It’s a marriage of style and substance the likes of which we don’t often see at sub-six-figure prices, and you might even think of it as a junior 911 Speedster – the GT3-based, slope-backed road-racer that costs more than £200,000.

Because the Cayman GT4 and Boxster Spyder weigh the same 1420kg (admittedly, rather a lot more than the old Spyder, which was 1315kg) they really are identical beneath the bodywork, even down to the suspension tuning, which is adjustable for toe, camber and anti-roll bar stiffness. Each car uses a double-wishbone front axle borrowed from the 911 GT3 and inverted dampers – a GT division calling card. Carbon-ceramic brakes are an option, but our test car had the sizeable cast-iron standard items, which sit within a new design of 20in wheels wearing Michelin Pilot Sport Cup 2 tyres said to offer better wet-weather performance than ever before.

There’s also six-speed manual gearbox carried over from the old Cayman GT4. It uses a dual-mass flywheel from the GT3 and sends power through a mechanical limited-slip differential at the rear axle, where you also get brake-based torque vectoring but no steering capability. A modified version of the seven-speed dual-clutch automatic ’box from the basic 718 Boxster is being developed, but it won’t arrive for at least another year, because the next-generation 911 GT3 has priority on Porsche’s to-do list.

There's also the not-so-small matter of the Spyder’s all-new engine – an upsized flat six with atmospheric induction. We’ll come onto that shortly, but the 4.0-litre 9A2 Evo is pretty special.

Inside, there are no surprises. The 360mm steering wheel is smaller than that of a standard Boxster and there's the option of the deep-sided carbonfibre bucket seats first seen on the 918 Spyder. They cost £3788, but without a roll cage, you can't get the harnesses from the Cayman GT4. Not that you'd want those in a car like the Spyder anyway.

Elsewhere, you'll find this is a useful place. There are the neat, out-swung cupholders, a good level of storage in the door cards and Porsche's 4.6in PCM infotainment system, though you can omit that to save 4.5kg. Again, you might do so on the GT4 to imbue the cabin with a certain level of seriousness, but on the Spyder it's overkill. There's also 150 litres of luggage space split betweent the front and rear comparments – not a lot but enough for a weekend away. 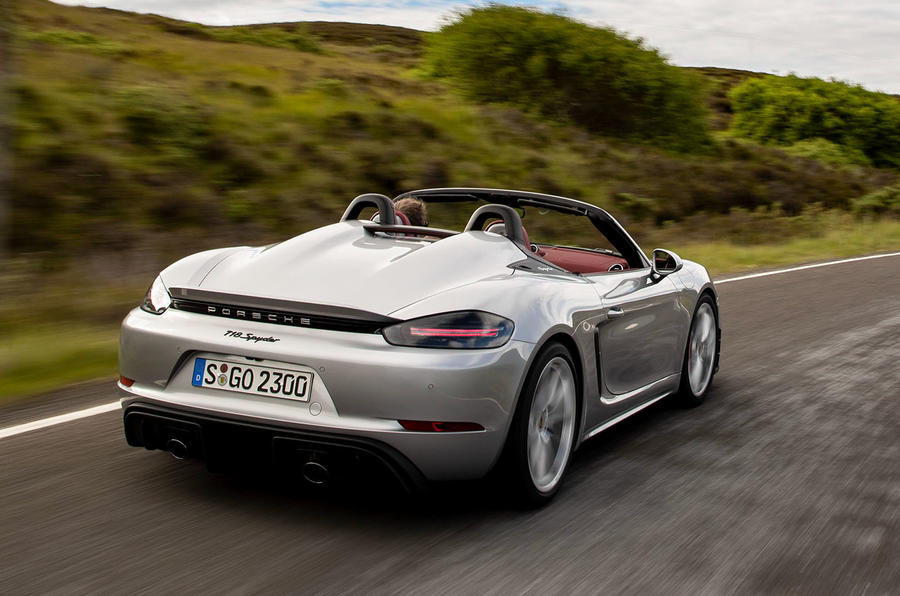 The Boxster Spyder is remarkably good, even by the standards of Porsche. When you drive it, you’re subconsciously putting yourself under less pressure to extract the most from its chassis and engine than you are in the Cayman GT4. There's just a different vibe with the roof down, but it's still 95% as capable. And when you’re not hell-bent on reaching the 8000rpm redline, the long gearing – felt particularly keenly in second – frustrates less. Likewise, when you’re not quite so obsessed with getting the car into the window where the rear axle is slipping, the fact this engine isn’t the equal of a supremely well balanced and stable chassis with masses of lateral grip doesn’t matter so much.

This is a car that does the basics so well that it’s perfectly possible to have the time of your life without ever eliciting so much as a flicker of activity from your risk-assessing frontal lobe. The steering is lighter than you might expect and only moderately geared, and guess what: it’s phenomenally intuitive. Among electromechanical racks, this is surely the current benchmark for feel. You get a useful degree of road surface filtered up into your palms, but it's the gloriously linear and natural weighting that stands out. Simply flowing the car through bends at a leisurely pace will leave you smiling and content, if that doesn't sound too twee.

So the steering is a peach, and just as well, because were it not, you might never discover how well the Spyder handles. Which is to say with stunning neutrality. It's possible to unsettle the car, but this requires a level of commitment that most owners will summon very infrequently on the road. So good are the brakes – both in pedal feel and power – that understeer can only come about by gross negligence, and benefitting from the car's balance, the 295-section rear tyres neatly follow those at the front through corners.

This isn't to say Porsche has built a car devoid of easy-going adjustabilty. Load up the front and a lift of the throttle will tighten the line. So sharp is the throttle response that you can then quickly tease the rear axle out of line – or more than tease, if you like. You'll certainly have the confidence to try, and when you do, you'll need to use amazingly little steering input. Point is, the Spyder's handling is neither too esoteric for casual drivers nor too humourless for serious ones.

Ride and general usability? Very good indeed. The Spyder sits 30mm lower than the standard Boxster, and its two damper modes seem quite closely related, although on our Scottish test route there was never any need to move our of the softer, default setting, even at great speed, so controlled are the body movements. In fact, the control is totally out of kilter with this level of delicacy; it's difficult to understand how the two attributes can coexist. Porsche must have fitted bumpstops, but I can't say for sure, because you never seem to get anywhere near them. The damping force is beautifully progressive and just feels into the overwhelming sensation of balance, composure and flow.

And on the subject of flow, the new 4.0-litre engine takes some beating. We've gone into detail in the Cayman GT4 review, but in essence it's a big engine in a small car, and it spins to 8000rpm, making 414bhp only 400rpm earlier. At 310lb ft, there's no improvement in torque over the old Boxster Spyder, and it arrives a touch later, at 5000rpm, but it's still enough to take the car to 62mph in 4.4sec and a top speed of 187mph, with or without the canvas roof in place. It's a level of performance comparable with that of a Ferrari F340 Spider, although the Italian car couldn't hope to match the German's combined 25.7mpg.

For some reason, this flat six also appeals more in the Boxster Spyder than it does in its Cayman GT4 sibling. I’m not sure why, because the previous versions of both cars used the same Carrera S-sourced 3.8-litre unit, which made a superb racket – one we miss in the current GT4. This engine's note is a bit more reserved. It's less harsh without much real spine-tingling quality but still fabuously smooth and full nonetheless, and it suits the Spyder's metre. It has more than enough about it to stroke the car along at around 3000rpm, at which point it's still superbly responsive and only gets better as you stretch it out. Second gear takes care of everything between 40mph and 80mph, but the gearshift is so good that you'll itch to slide across the gates and into third. You really need to decide what sort of mood you're in and then stick to it: third or fourth for quick but leisurely progress, second for a thrash. There's also an autoblip function. You don't need it, but it's there and very good indeeed.

Finally, as for the way the thing looks, the images don't do it justice. The arrival of GT3 hardware for the Spyder coincides with an injection of visual brawn. With a jutting front splitter, a ducktail spoiler and a beefy rear diffuser (check out the central venturi tunnel), it channels elements of 996 GT2 and 918 Spyder in package shorter than the Volkswagen Golf and only millimetres wider. With all the aero elements and huge front air intakes, it's not classically beautiful, but with the buttresses of the rear deck it plays the junior supercar card well. 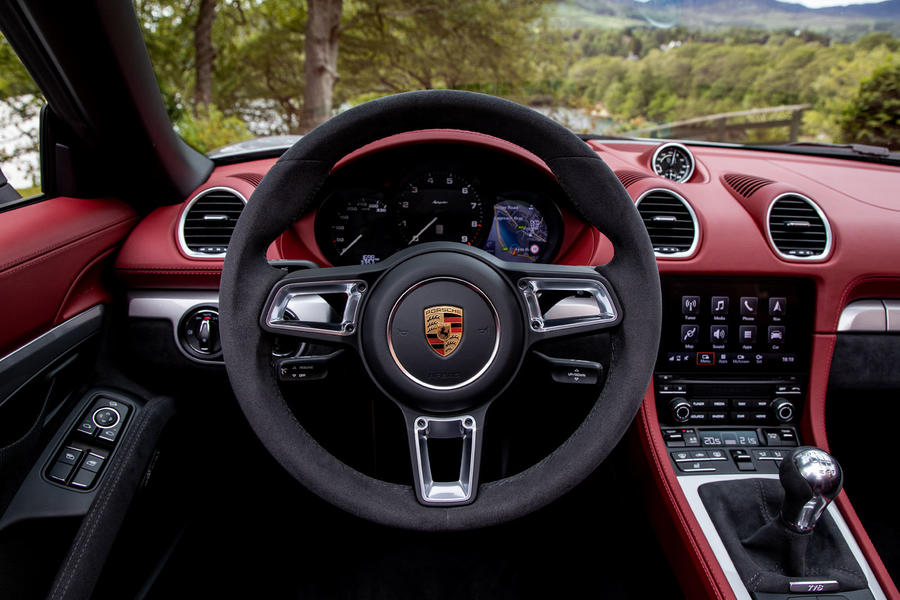 The Boxster Spyder is a bargain, and yet it's a thoroughbred, and it will make you extremely happy.

In any case, this is such a distinctive car both in look and feel that if you want and can afford one, there’s probably little that’s going to stop you anyway. And there’s little that should stop you. Character, dynamism, usability and price: there’s barely a chink in the Spyder’s armour, which could well be most broadly desirable car Porsche now makes.

You can’t access the rear boot unless the manual roof is folded away, and the mechanism itself requires that you stop the car and get out, but if these are deal-breakers, buy a Boxster GTS. Whether you could subsequently live with yourself for prioritising a small degree of convenience over a big-capacity engine and such a fabulous chassis is another matter. Availability shouldn’t be a problem this time around, either; Porsche is going to build the Spyder until at least 2022, which it says will give it enough time to satisfy all demand.

Sensibly sized and unobtrusive in a way that belies just how special it is as a naturally aspirated, mid-engined, two-seater, three-pedal sports car in modern times, this might not be the car you need, but it is one you should covet deeply. 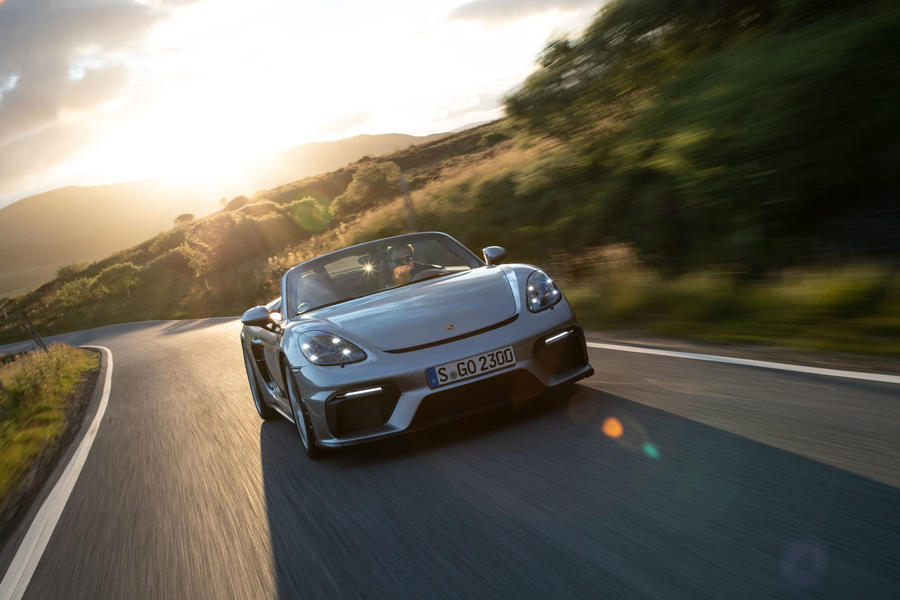 I think it's the perfect road

I think it's the perfect road sports car. You don't need the downforce wings and splitters, as you don't go fast enough for them to really come into play. GT suspension underneath. 400bhp is just about right. The roof design means you interact with the car in a different way. A pair of heated bucket seats, hat on and away you go. I can't wait if I can get the man maths to work!

That's another string to its bow.  Might mean people will drive them too...

Yes please, but can you

Yes please, but can you option the Cayman with the ducktail? Now that would be lovely.