Porsche’s GT division has used the Goodwood Festival of Speed to promote its latest offerings: The 718 Boxster Spyder and 718 Cayman GT4.

Both cars shun the industry trend for downsizing and forced induction, donning a naturally aspirated six-cylinder engine and a manual gearbox. Porsche says they will offer enthusiasts “unadulterated driving pleasure”, a “high level of agility and an almost intimate proximity to the centre of power”.

These faster, purer and more hardcore variants of the existing Boxster and Cayman join at the entry point in the road-going GT line-up, but both make use of an engine bored out and adapted from the 3.0-litre unit of the latest 911.

The new 4.0-litre flat six – up from the 3.8 litres of the previous Spyder and GT4 – forms a new engine family called 9A2 Evo. It ditches the turbocharger found in the 991-series 911 Carrera but still manages to put out 414bhp. 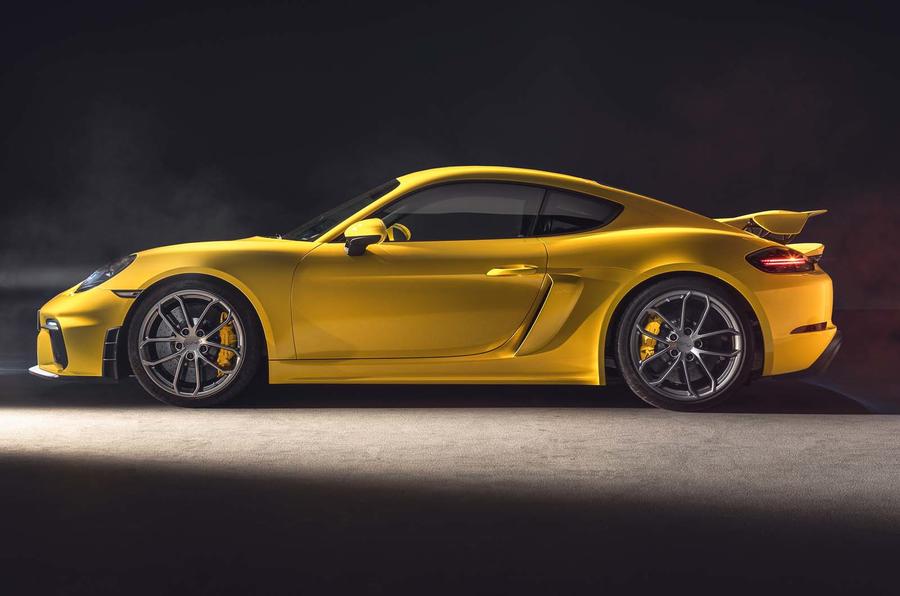 That figure is 44bhp and 35bhp more than the previous Spyder and GT4 respectively. The new unit revs out to 8000rpm and delivers peak torque of 310lb ft between a relatively high 5000rpm and 6800rpm.

The result is that both models are capable of 0-62mph in 4.4sec, with the Spyder managing a top speed of 187mph and the GT4 topping out at 188mph.

Both cars put their power down through a six-speed manual gearbox only. A Porsche spokesman told Autocar: “If the market asks for PDK, it [an automatic version] might be feasible, but the spirit of the cars and customer demand is very much oriented to manual.” 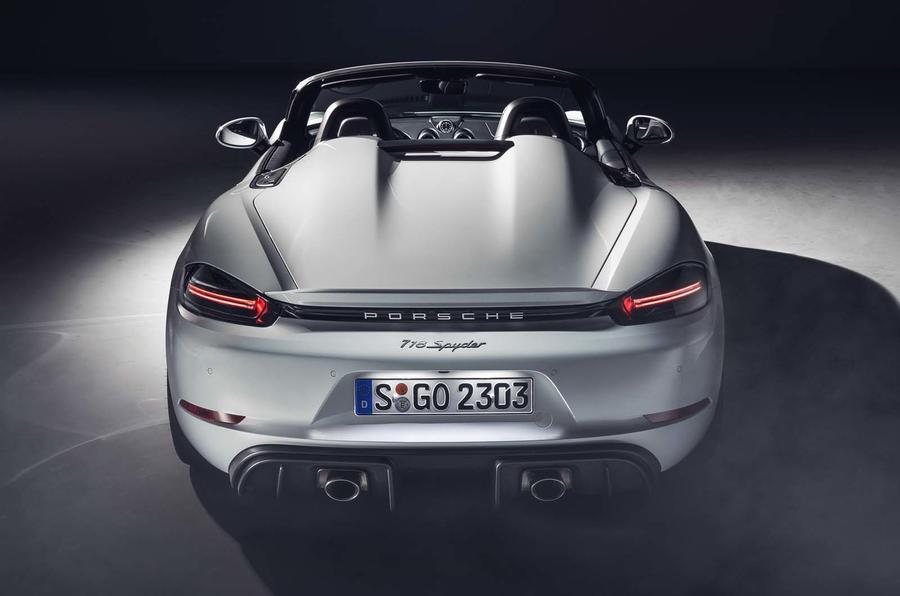 New technology has been brought in to increase the engine’s efficiency and stave off the need for forced induction. Alongside a particulate filter to reduce NOx emissions, Porsche has introduced a new adaptive cylinder control system that can briefly pause fuel injection in one of the two cylinder banks under partial loading. Piezo injectors are used for the first time, alongside a variable intake system.

Porsche claims fuel economy, calculated through the new WLTP cycle, of 25.7mpg. That figure is less than the old cars’, although it can’t be compared as they were put through the old, less realistic NEDC cycle. CO2 emissions are put at 249g/km.

Porsche claims to have “comprehensively improved” the GT4’s aerodynamic efficiency for the 718 model. It’s said to produce up to 50% more downforce than the old car without having a negative effect on drag. Features such as a more compact rear silencer, giving space for a functional diffuser, increase downforce by 30% at the rear, while the fixed rear wing is 20% more efficient than the old one. This adds up to 12kg more downforce at 124mph. 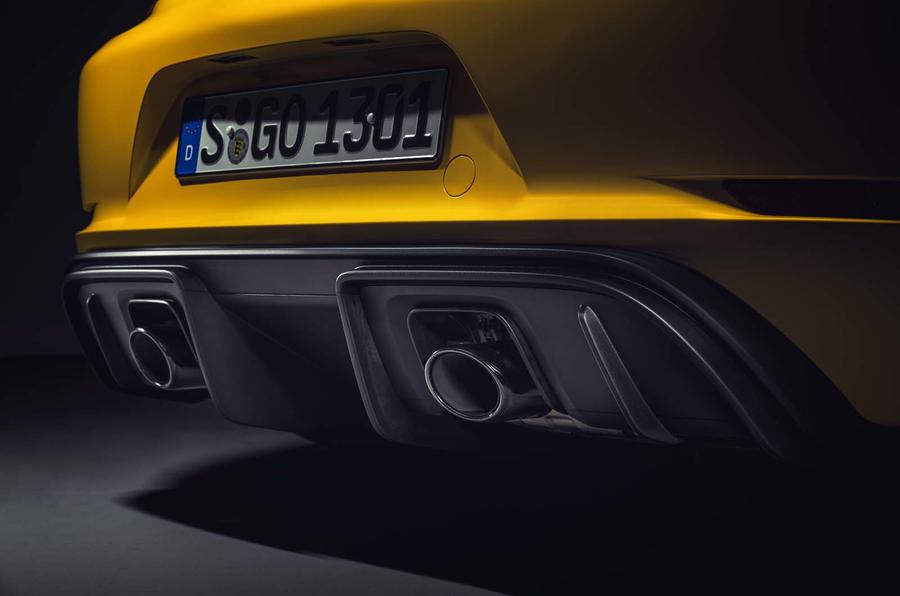 The 718 Spyder is, being a soft-top, less aerodynamically efficient. However, it makes use of a rear spoiler that rises at 74mph and is the first Boxster to feature a rear diffuser and generate downforce at the rear axle. The hood itself, which continues the distinctive look of previous Spyders, is still manually operated. Porsche claims it can be stowed away in “just a few steps”.

Chassis: shared between both for the first time

Unlike previous generations of the Spyder and GT4, both cars now feature the same GT chassis underneath. Raceinspired spring and strut front and rear axles feature, along with a Porsche Active Suspension Management damping system that’s 30mm lower than standard variants. It’s claimed to be “specifically designed for use on the racetrack”.

The Porsche Stability Management (PSM) system is tweaked to be less obtrusive, and torque vectoring with a mechanical rear differential lock features. Both again have the option of a ceramic braking set-up, alongside the standard track-focused aluminium mono-bloc fixed-caliper system. The 718 Spyder also uses the same Porsche-specific high-performance tyres, made by Michelin, as the GT4. 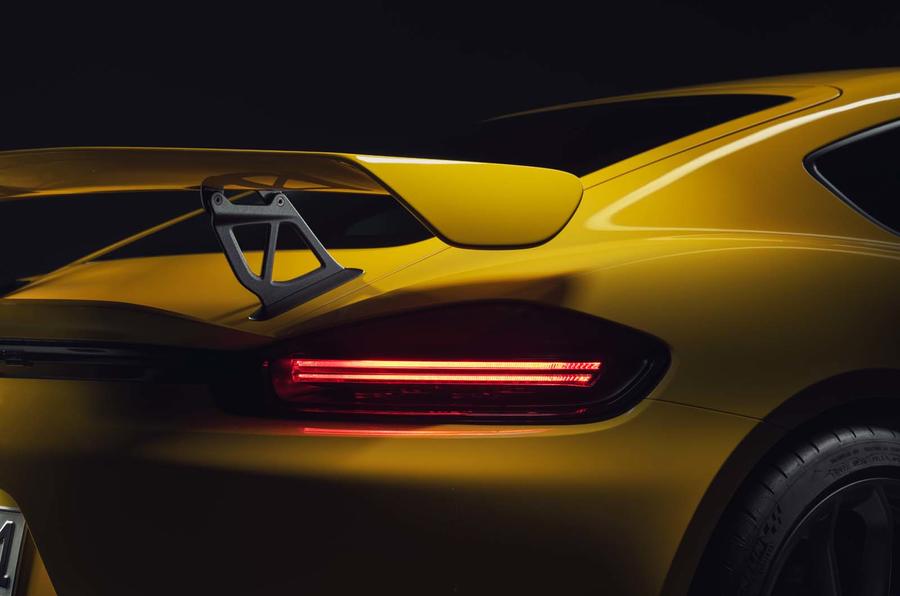 Porsche claims the alterations and extra power enable the Cayman GT4 to lap the Nürburgring Nordschleife more than 10 seconds quicker than its predecessor.

The firm hasn’t released specific details about the interior of either car, beyond the images you see here. But it’s apparent that the new GT4 retains many details of the previous version, including fabric door pulls in place of traditional handles, bodycoloured seatbelts and the removal of the infotainment system, which in the old car could be reinstalled as a no-cost option. The Spyder, on the other hand, appears to retain standard door handles and its infotainment system. Each has copious amounts of Alcantara. 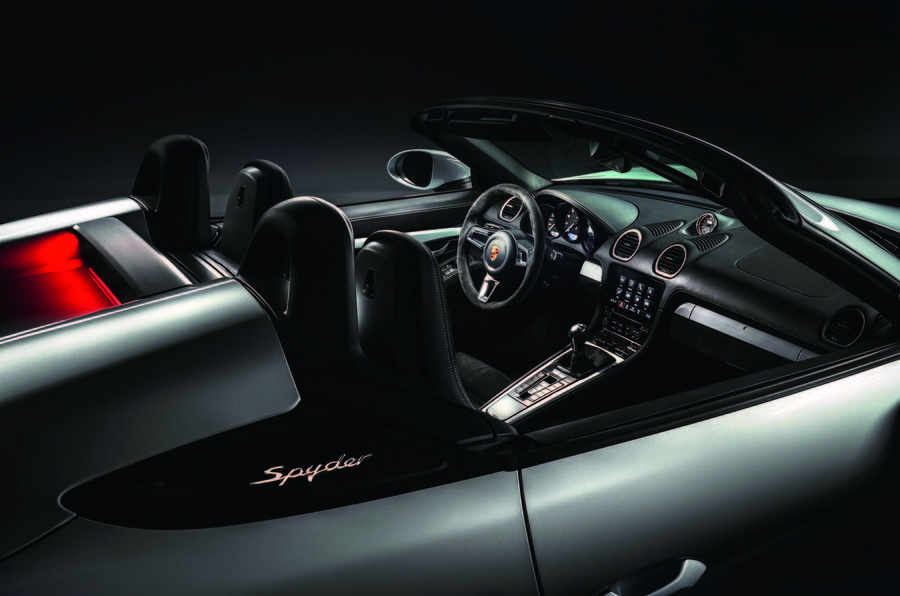 The GT4 also has the option of a Clubsport package. This includes a steel roll bar at the rear of the cabin, a small fire extinguisher and a six-point seatbelt for the driver’s side. Pricing for that package has yet to be revealed.

So no detuned GT3 engine?

Engine choice makes sense on many levels. The detuned GT3 engine would be relatively easy to return to its normal state of tune, or close to, and that would upset the hierarchy. GT3 engine is also perceived as a more expensive unit to produce and almost certainly is, and finally the performance of this GT4 is deliberately kept below the GT3 for obvious marketing reasons so does not need the GT3 unit. Although the PDK is again absent on this model, don't rule out the long rumoured GT4RS to appear 18 months from now equipped with said GT3 unit and PDK. The next gen GT3 will be out by then and with its improved performance will leave the window open for the GT4RS. It's well documented that test mules with the GT3 engine have been running, and with PDK or sequential. So you know its coming this time around.

How many sales have been lost?

Wonder how many sales they've lost by switching to a 4 cylinder engine and whether the lack of fines makes up for this.
The irony is that in the real world the 6 is probably not that much less economical especially if driven hard when turbos really use it fast.
paulmt123 18 June 2019

The S should get a 6

So Porsche downsized the engine of 718 with turbos to meet emissions regulations.
But why not sell the base car with a 4 and the S versions with a flat 6? The base version would be faster so plenty would still pick it but those that love a 6 and the smoothness and soundtrack could get the S.
Will86 18 June 2019

So Porsche downsized the engine of 718 with turbos to meet emissions regulations. But why not sell the base car with a 4 and the S versions with a flat 6? The base version would be faster so plenty would still pick it but those that love a 6 and the smoothness and soundtrack could get the S.

The slower the better (within reason) because you'll have more time to enjoy that flat 6 howl. Take the 3.0 from the 911, ditch the turbos and enjoy.

Cars would be so much nicer without the wretched 'ring time obsession.

But it is incredibly encouraging that Porsche is again making lovely, non-turbo, manual cars at slightly plausible prices.

It is a fascinating and positive reflection of their customers in comparison with those of Ferrari.