From £85,5768
There are fewer compromises in the drop-top 911 than ever. It's imperious and competent, if rewarding only at full attack
Open gallery
Close
by Dan Prosser
14 March 2019
Share

Just as deliveries of the new, 992-generation Porsche 911 coupé are getting underway, Porsche has launched the drop-top model as well.

For the time being, you can only order the 911 Cabriolet in Carrera S specification and with a dual-clutch (PDK) automatic gearbox, although Porsche will invite you to choose between two driven wheels and four. In due course, there will be a more affordable and slightly less powerful Carrera version and the option of a manual transmission.

Apart from all the revisions and upgrades we’ve seen already on the fixed-roof model, such as a body structure that’s now two-thirds aluminium and the same width across the rear arches whatever the power output and driveshaft count, plus a front track that’s wider by 46mm and, of course, the more arresting exterior design, the updated Cabriolet boasts a number of small but significant features.

The canvas hood, for instance, has a series of metal bows within it that maintain its shape whether the car is travelling at 189mph or not at all. As well as preventing the hood from ballooning inelegantly at speed, they also mean the Cabriolet almost perfectly mimics the roofline of the coupé. As recently as the the 997 generation, Porsche’s designers cheekily referred to the drop-top's disjointed roofline as the ‘hungry horse optic’, because when viewed side on, the canvas hood didn’t so much sweep gracefully from front to back as call to mind a malnourished pony, its thin skin hanging loosely from protruding bones.

The new powered hood can be raised or lowered in only 12 seconds while the car is moving at speeds of up to 31mph. Run your hand across the underside when it’s raised and it feels solid, more like a fixed roof that’s upholstered in hardwearing canvas than a fabric covering that can be peeled away. In terms of refinement and insulation, it’s therefore not very different to the coupé’s metal roof, and that, combined with the improved profile, means the compromises one must accept when choosing the Cabriolet are slimmer than they’ve ever been. There’s a very effective windbreaker, too, while the roof now contorts itself into position more compactly and so takes up less space.

There is still a weight penalty, however, and 70kg is hardly negligible. Like for like, the new 992 is around 55kg heavier than the 991 it replaces (which means the 911 Cabriolet Carrera 4S PDK now sits at the kerb more than 1700kg, with a driver). The rear-wheel-drive version tested here is lighter by 50kg.

The 911 Cabriolet’s substantial weight seems less significant when you consider the 444bhp it has beneath its engine cover. The 3.0-litre flat-six has bigger turbochargers than before that are nonetheless faster to respond to throttle inputs, reducing lag. The PDK, meanwhile, now has eight forward ratios rather than seven. 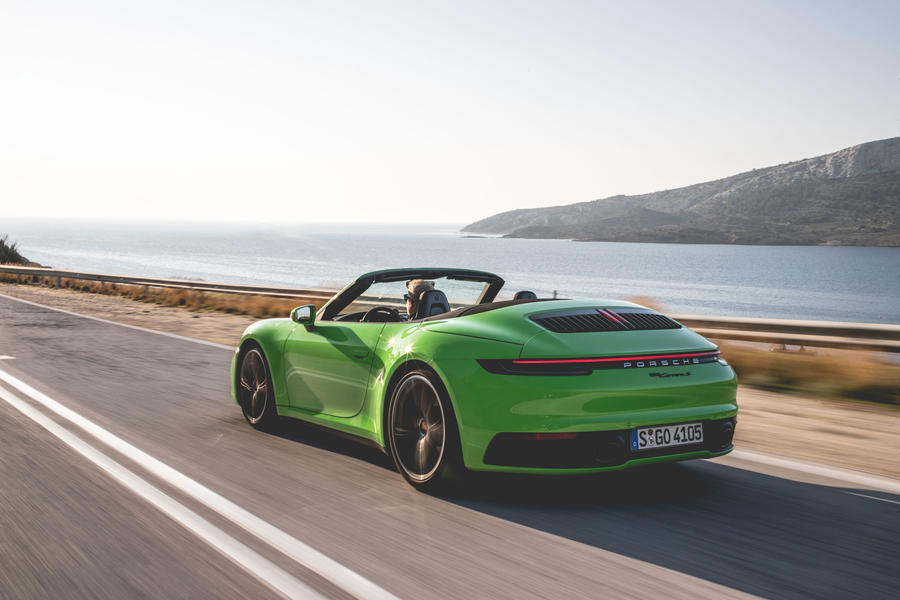 Over the years, the 911 has gradually felt less and less like a 911, its engine creeping forwards a fraction with each new iteration and along with it the weight distribution. No longer do you routinely feel the weight of the engine sitting way out beyond the rear axle line.

In parallel with that, the 911 Cabriolet has felt less and less like a cabriolet (at least with the roof in position) as the years have rolled on, because as well as it now being far more refined and its roofline no longer looking like a badly pitched tent, its body structure has grown impressively rigid. Over very poorly surfaced roads, you get some sense of the body around you shimmying a little, but most of the time it feels just as stiff as the coupé’s shell.

While the front wheels are 20in in diameter, the rears span 21in. With the optional Sport Chassis, which drops the ride height by 10mm, that means there’s an enormous rim in each rear wheel arch and not particularly far for either one to move up and down. On rough ground, the ride quality is therefore very tense and taut, but within whatever suspension travel there is, there’s enough pliancy and give to keep things on the correct side of harsh. On better roads, it's actually rather good.

As you appreciate that composure at moderate speeds, you also sense vast amounts of grip and traction, as well as imperious body control and stability. With the PDK doing its thing and the slightly tuneless flat-six lumping you along, it’s quite easy to forget that you’re driving a 911. It simply doesn’t feel like the rear-engined sports car so many of us have become familiar with. In fact, at a canter, it can feel a little vanilla. 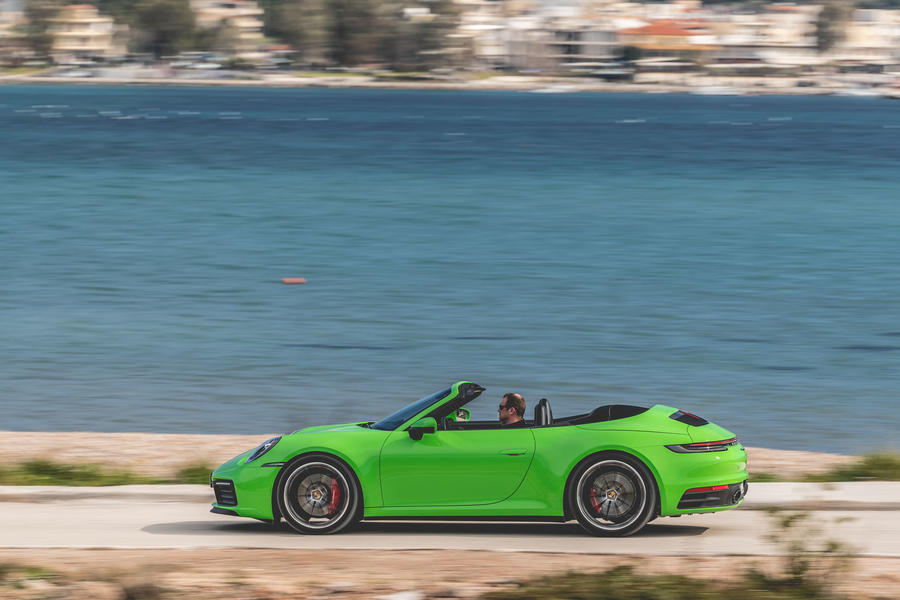 To squeeze the character and charm out of the Cabriolet, you have to turn the wick up, take control of the gears and, because you can, drop the hood. That’s when it becomes not only competent, capable and quick without much effort but also engaging and entertaining – the way a 911 should be. This newest of 911s can still grab your attention, it just does so only when you've put in a little effort.

Even with an optional sports exhaust system, the engine lacks song, although the chirrups and flutters from the pair of turbochargers are at least fun. The motor is massively strong, responsive and linear in its delivery, however, with a top end that’s worth exploring. The PDK, which does hunt around too much in automatic mode, is faultless when you’re clipping along and switching ratios yourself.

There are occasions when you’re clipping along a twisting mountain road that you sense a disproportionate amount of weight lingering over the rear axle, but for the most part, you drive the 911 like you would a mid-engined car. That’s partly because with a much wider front track, it now darts into corners like a bullet ricocheting off a bank vault door. No longer do you have to coerce a very light front end in towards an apex.

The Cabriolet doesn’t seem to labour under its own additional weight, at least not in isolation. Drive it back to back with the coupé and you’ll sense the extra mass, as you will when you really start working it hard along a narrow mountain pass. But it's still explosively fast and feels agile and alert when cornering. The rear-wheel-drive model is sweeter to drive than the Carrera 4S, which feels stodgier in its responses and more flat-footed, while its steering is heavy, lazy and afflicted by an odd stiction at points, rather than being crisp, sharp and intuitive as it is in the Carrera S.

As for the new interior? It’s mostly very good, and the seating position is excellent. With the seat in its lowest setting, however, there’s really nothing of any use to be seen through the tiny rear screen, which only affords a view of the sky behind you. 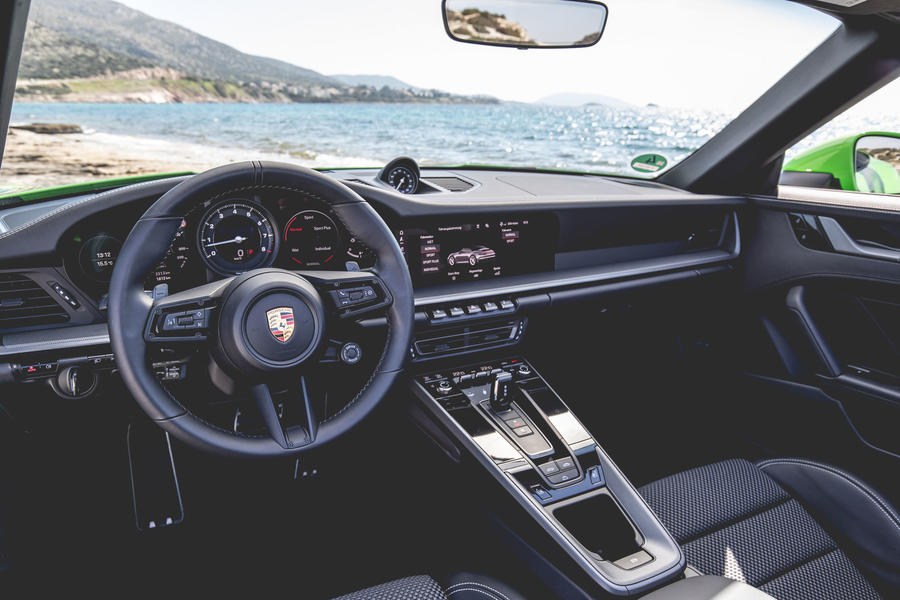 There are now fewer reasons not to buy the 911 Cabriolet than at any point in its long history. Its roofline is more attractive, refinement with the roof in position is very good and the structure is exceptionally rigid. The car has a wide breadth of ability and, particularly in Carrera S guise, can still be rewarding to drive.

But none of it comes cheap. Even the rear-wheel-drive model has a six-figure price tag (£102,755), and once you’ve added a handful of options, you’ll be looking at a very substantial invoice indeed. A number of the very highly specified cars at the launch event carried prices north of £150,000.

While the coupé is still the Porsche 911 of choice for very keen drivers, the Cabriolet has never been closer. 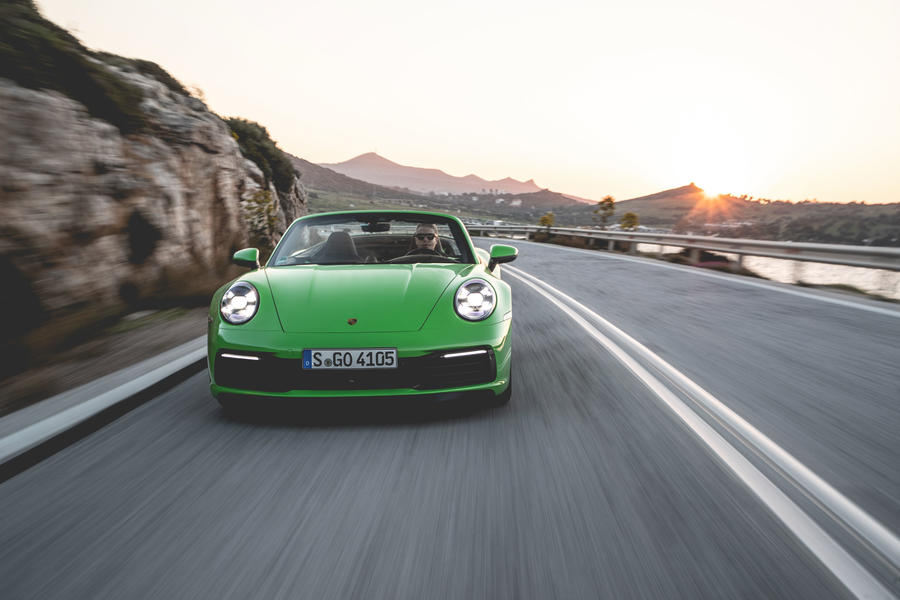 I like the taughter body surfacing on the new 911 (992) and the fact there is no narrow body option is a blessing. IMHO the narrow body hasn't suited the car since 996 was introduced.

The convertible looks better in darker colours which reduces the visual bulk of the rear hood engine cover.

I'd wait for the 7-speed manual transmission in GTS trim. Always a desirable specification come resale.

That rear end will probably mirror that of driver. I can’t stop laughing whenever I’m at a petrol station and an exotic car pulls in and some creature wearing shades gets out. Inciting others to reach for their darkest glasses to avoid their look to be mistaken for envy. At least my looks are matched by the plain and ordinary car I choose to drive daily. But weekends well that’s a different story. I become one of those jokers as well

Too much negativity here.

You should watch Chris Harris quick review of yellow 992. He is much more positive.

The problem with 911s now is that they are simply too powerful and gain illegal speeds too fast. To break through their immense competence on has to drive them real fast, which is simply impossible on public roads.

That’s what they use to say about 911 Turbo, but now they are all turbocharged and the lethargy filtered down the ranks.