BACK TO ALL NEWS
Currently reading: Porsche 718 Cayman and Boxster GTS bring back six-cylinder power
UP NEXT
Tesla to expand select UK Superchargers to other electric vehicles

Porsche has brought back six-cylinder power to the standard 718 Cayman and Boxster line-up in the form of new GTS 4.0 variants. They’re available to order now, with first deliveries due in March, and are priced from £64,088 for the Cayman GTS 4.0 and £65,949 for the Boxster version.

For the GTS 4.0, the engine is detuned from the 414bhp of the GT4 and Spyder to 395bhp, which is produced at slightly lower revs than the peak power of those cars. The torque figure remains unchanged.

The redline for the GTS engine is 200rpm lower than the GT4 motor’s, topping out at 7800rpm. However, both new models continue to use the sports exhaust system from the GT4 and Spyder. 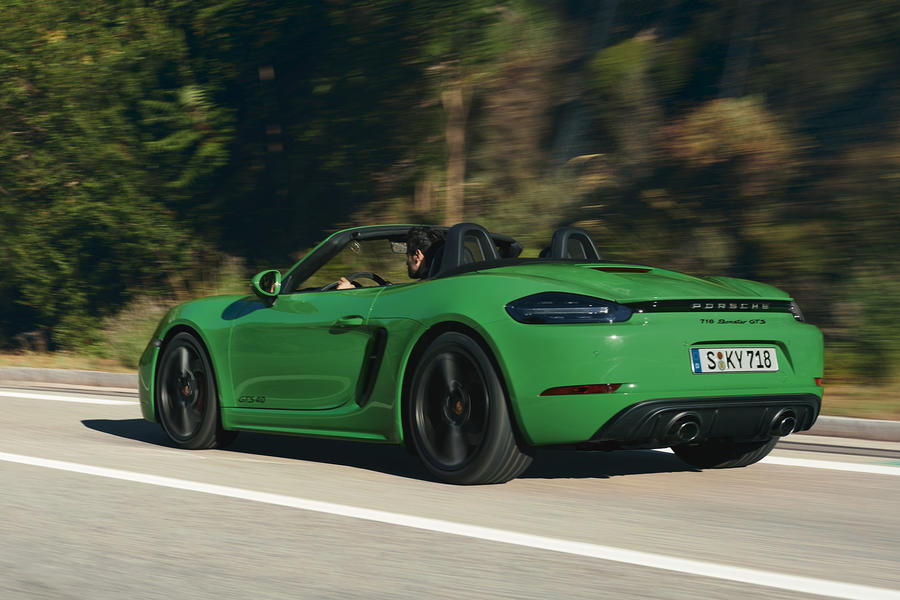 The two GTS 4.0 models come solely with a six-speed manual gearbox at launch, although an automatic option is expected at a later date. Features such as adaptive cylinder control, which shuts down one of the two cylinder banks at low engine load, helps the new motor achieve 25.9mpg under WLTP rules, and a CO2 figure of 246g/km.

The 718 GTS 4.0 models feature Porsche’s Active Suspension Management system, which drops the ride height by 20mm over the base Cayman and Boxster. Also included is a torque vectoring system with a mechanical limited-slip differential, the Sport Chrono pack with active drivetrain mounts, and an upgraded Porsche Track Precision App.

Reining in the standard 20in black alloy wheels is a brake system upgraded from the regular models’ and marked out by cross-drilled discs and red calipers . A ceramic-composite set-up is an option.

Exterior changes for the new GTS pair include dark contrast detailing on the spoiler lip, air intake and lower rear bumper, as well as tinted front and rear light lenses. Inside, there’s liberal use of Alcantara, including on the Sports Seats Plus, and a number of personalisation options.

Long read: What is the future of driving for fun?

Are Porsche hiding something?

I put a deposit on this car in July last year and the launch date has been slipping (according to the dealer) ever since.

It should be great – although I’m having to wait until October for the PDK.

But now it’s announced, I do have a concern that Porsche are trying to hide the product placement issue they always to artificially manipulate between models.

Porsche are not quoting torque figures from what I can see.  I wonder if the old 2.5L GTS will accelerate faster than this new 4.0L model.  Maybe this model will be neutered so it doesn’t make the 718 GT4 look inferior (hence no PDK at launch) hence creating the bizarre situation where the old GTS out accelerates the new model.

Here’s my question Autocar – you state that the torque is unchanged from the GT4.  I can’t see that in anything released by Porsche.  I hope you’re right but what’s your source?  I fear they are not releasing torque figures and trying to make it hard to compare the three models - 2.5 GTS, GT4 and 4.0 GTS – because the 4.0 isn’t as good on paper as it should be.

I'd be a bit miffed if I'd just bought a GT4

And they bring out these with ahrdly any less power....

obviously my spelling is rubbish.. hardly any less power

I have never owned a ragtop, but, if I was wanting one I'd buy the 718, it just looks right,not to big or small,sits nicely on the road,and, as I said, I like the green color.