From £11,9958
Not quite a class-leading return to form, but a more stylish and tech-savvy kind of Micra than we’ve ever known – and an encouraging one to drive
Open gallery
Close

Do not adjust your sets, ladies and gentlemen – it really does say ‘Micra’ on the bootlid of the bold- and alluring-looking hatchback you’re looking at. It’s hard to believe, partly because ‘daring looks’ don’t rank among the strengths that this long-lived supermini has built a reputation for over its thirty years on sale. But the fourth-generation Nissan Micra that's now being ushered into the waste paper basket of automotive history was both singularly undesirable and execrable to drive. Micras have not always been thus, but the last one certainly was. The new one, however, is anything but.

So much we already know, of course, after a lengthy drive in a prototype Micra late last year. Now comes the chance to drive the finished car, which arrives in UK showrooms in, wait for it… March (a gag there for anyone who knows what this car is called in many other global markets. Waka waka, how we laughed, ahem).

The new fifth-generation Micra is built on an updated version of the same ‘V-platform’ that underpinned the last version but has undergone radical change under the skin; major mechanicals shared between the last Micra and the new one number only the engine mountings and the relative location of the car’s pedals, some of the suspension components and the fuel tank. The new Micra has a power steering system derived from that of the Nissan Qashqai, a completely reconfigured chassis, wider axle tracks, a lower centre of gravity, all-new seats and interior, and a choice of engines and transmissions sourced from alliance partner Renault. For now, the most powerful of those engines is the 898cc turbo petrol three-pot that also serves in the Renault Clio and Twingo, producing up to 94bhp and 111lb ft of torque on overboost.

Now built in a Renault factory in France and developed for the most part at Cranfield, UK, the new Micra is out to prove that it can represent the sub-compact car as only Europe knows how to make it. Among the segment-firsts it brings to the table are a camera-based active lane keeping system, ‘around-view’ parking cameras and an innovative premium audio system from BOSE with near-field speakers housed in the driver’s head restraint.

And for those more interested in the driving experience, this is a car benchmarked against the very best in the class – and which, on this evidence, won't give the likes of the VW Polo, Ford Fiesta and Mazda 2 an easy time when push comes to shove on UK roads. 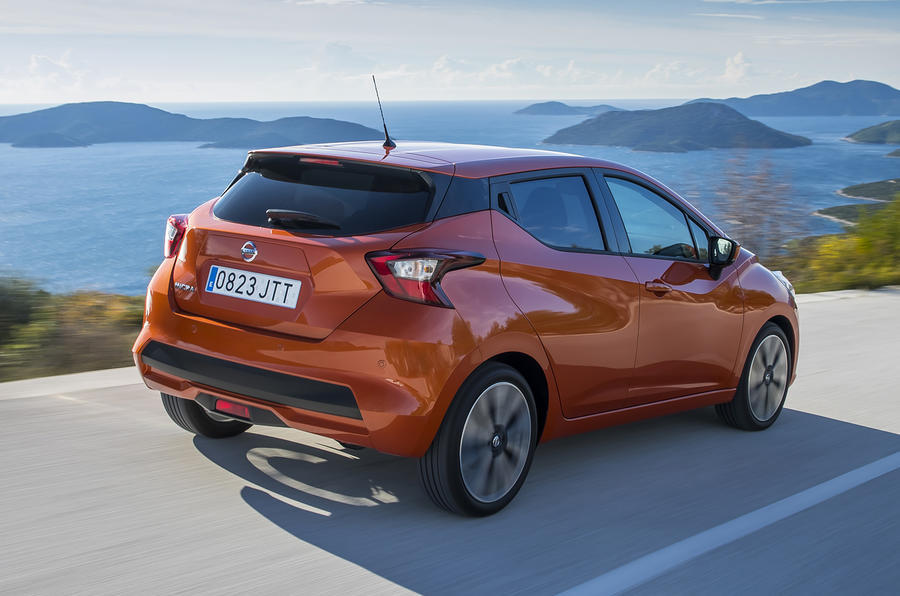 The Micra’s cabin smacks of the same feather-ruffling ambition as the exterior. The quality of its plastic mouldings is consistently high and, although you do have to pay for a higher-end model to get the more colourful finishes and richer material touches of our Tekna-grade test car, the Micra’s soft-touch rolltop dashboard and attractive chrome accents come as standard.

Like its power steering system, the Micra’s instrument pack comes from a Qashqai, as does the 5.0in colour ‘drive assist’ trip computer screen – and so both are a good size and supremely readable. Tight back seat space is the one serious black mark you can level at the car, although there’s still enough room to get bulky child seats in and out easily. Otherwise, the Micra’s is an interior that bears comparison with the very best.

Both the 898cc turbocharged petrol version of the Micra and the 1.5-litre diesel were available at the European press launch, and both produce a nominal 89bhp, with the entry-level 72bhp 1.0-litre three-cylinder petrol set to follow on.

Considering the hefty £1350 premium that Nissan is asking for the oil-burner, the fact that it would actually be a more expensive prospect than the equivalent petrol on company car tax, and the general kicking that diesel emissions are getting in the national press at the moment, you’d expect a dwindling proportion of customers to be interested in the ‘dCi’. Both turbocharged derivatives get a noise-reducing ‘acoustic’ windscreen as standard, however, and both operate with good mechanical refinement – the three-cylinder petrol in particular running more smoothly and quietly than we’ve found it in other applications. 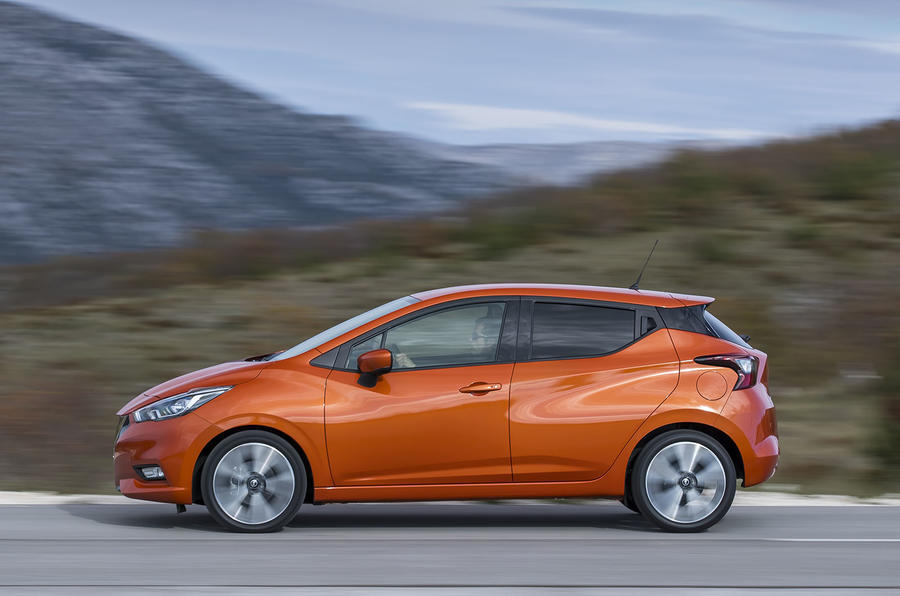 The three-pot petrol definitely makes for the sweeter all-round drive in this new Micra, its relative lightness allowing for softer spring rates on the car’s front axle than the diesel runs, and a marginally more settled ride.

On performance, there’s a softness to the engine’s pedal response that makes it feel a little reluctant at first. Even at maximum torque, it doesn’t pull quite as stoutly or feel as flexible or as linear as other downsized turbo petrols. Nonetheless, it does a very creditable job of motivating what’s a relatively light supermini, through a nicely weighted and agreeable five-speed manual gearchange.

On ride and handling, Nissan’s mission was to approach the agility and verve of a Ford Fiesta and the planted, rubber-footed composure and maturity of a VW Polo; an impossible brief, really. But, although the finished Micra doesn’t end up beating either rival on their own terms, it does split the difference between them with some success.

The Micra steers with more lightness and less pace than the Ford, but handles with similar fluency and feel; rides with a noisier, busier, springier gait than the VW, but with better isolation and absorption than most of its competition. It corners with good grip, crisp chassis response, fine body control and discreet electronic stability management, making a keen virtue of its compact size but obvious without compromise to its low-speed ride. It’s got a comparable understated kind of dynamic polish as the mkIII Micra had, in fact –  without managing to be particularly memorable or special. 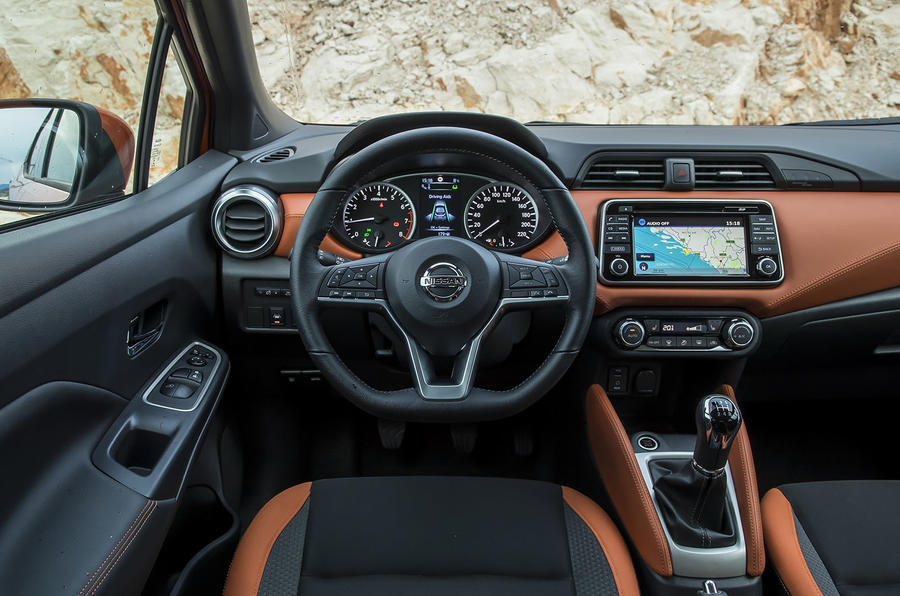 You should definitely give it a chance. After a regrettable hiatus, the Nissan Micra is back to its very best as a small car presented and executed to an apparently high European standard – and in almost every way that matters.

Also styled and equipped like Nissan means business, the Micra has just confirmed what our earliest impressions suggested a couple of months ago: that Nissan’s deadly serious about forcing its way back to the sharp end of one of the most important parts of this continent's car market – and that any buyer would be unwise to overlook one of its very best recent efforts.

No mention it shares any Clio bits...

At the Paris motor show I compared this to the Clio at the adjacent stand - they do share door mirrors. But why is there no mention of anything else they share? Or don't they share anything?
xxxx 13 January 2017

Well Porsche share VW engines but I bet you don't see that in the brochures and press releases either.
stumpys182 12 January 2017

Great little car and it

Great little car and it deserves to do well. Although I'm not sure it will bring back the original Micra clientele (my mother in law, 76, is on her 4th Micra!), but I doubt that's what Nissan is looking for, as many of them are probably dead by now! Shame they had to mention the 'F' word so much again though. Autocar could save a lot of copy-space, if they just wrote 'Good, but not as good as a Fiesta' The End!
MaxTorque 11 January 2017

Further to my earlier comment, it's clear that the Nissan designers also copied the interior design of the Kia Picanto:

Are the people at Nissan having a laugh or what?

I'm not sure if you'll be able to read this, however

May I suggest visiting an optometrist?
bowsersheepdog 15 January 2017

Further to my earlier comment, it's clear that the Nissan designers also copied the interior design of the Kia Picanto:

Are the people at Nissan having a laugh or what?

Yeah, spot-on. And it's got four wheels as well. And a windscreen. And seats that you get into through doors. And an engine at the front and a boot at the back. It's all just copied.