From £18,6157
Third-generation supermini doesn’t quite match style with equal substance – although its 1.2 turbo petrol engine is a good one
Open gallery
Close

This might reasonably be described as the half-new Citroën C3. The new half will be immediately obvious: the Ford Fiesta rival has been given the most adventurous styling overhaul in its now-three-generations-old history, bringing it up to speed with the firm’s new family look as pioneered by the C4 Cactus and later taken on by the Citroen C1 city car. And, like it or not, you can’t claim the car isn’t now cutting a bit of an alternative dash – as a Citroën should yet as the C3 has thus far singularly failed to do.

The not-so-new half is what’s underneath the car, which is a partly overhauled but mostly inherited version of the ‘PF1’ supermini platform that the PSA Group has been using as the basis of its small cars for more than a decade. Technically, then, the C3 isn’t so new – although there’s an all-new ‘Common Module Platform’ replacement for PF1 currently in the works that will be finished in time for the car’s mid-life facelift.

The C3’s engine range is made up of 1.2-litre petrols of between 67bhp and 108bhp and 1.6-litre diesels of either 74bhp or 99bhp, all driving the front wheels via a choice of five-speed manual, five-speed semi-automatic or six-speed torque converter automatic gearboxes. The car has grown by a couple of inches in length, but now measuring almost exactly four metres at the kerb, it’s still a very typical size for a supermini – and comes in five-door form only.

Our introduction to the car came in a mid-range 81bhp petrol variant on European roads and in left-hand-drive form; now is our chance to test the car in the UK, in right-hand drive, and in range-topping 108bhp turbocharged petrol form. More striking that pretty to look at, the C3 borrows liberally from ever-so-popular SUV styling language – and yet not so much as to look bulky or incongruous. Plump for a top-of-the-range Flair model such as our test car and you get those Cactus-derived stylised ‘air bump’ bodyside protectors, plastic wheel arch extensions and a contrasting roof ‘floating’ atop blacked-out pillars – all of which could easily have looked ridiculous on a normal five-door shopping car. And yet, to these eyes, the C3 successfully makes them constituent parts of a coherent look.

The car’s interior is every bit as distinctive. Flat seats with inclined bases sit you quite bent-legged at the wheel, but not uncomfortably so – and there’s plenty of steering column adjustment and fairly well-placed pedals. Unlike in the Cactus, the C3 gives you proper analogue speedometer and rev counter dials, while most of its secondary ventilation and systems controls are consolidated onto the central 7.0in touchscreen infotainment screen. The latter approach brings advantages and disadvantages, of course – just as it has to so many current Peugeots and Citroëns. It’s annoying that adjusting the car’s heater temperature often takes several arms-length jabs at a touchscreen and demands more of your attention than you’d like to be diverted from the road ahead.

On the flipside, the reduction in necessary switchgear leaves the fascia looking nicely decluttered – although Citroën doesn’t turn that advantage to the C3’s benefit very effectively, providing only annoyingly small and poorly placed cupholders and little centre console storage. The car’s fascia doesn’t feel as appealing as it looks, either; plastics are uniformly hard, rough in places and quite shiny. And accommodation levels aren’t great; rear seat space is well below par for the supermini class, while boot space is better but not brilliant. 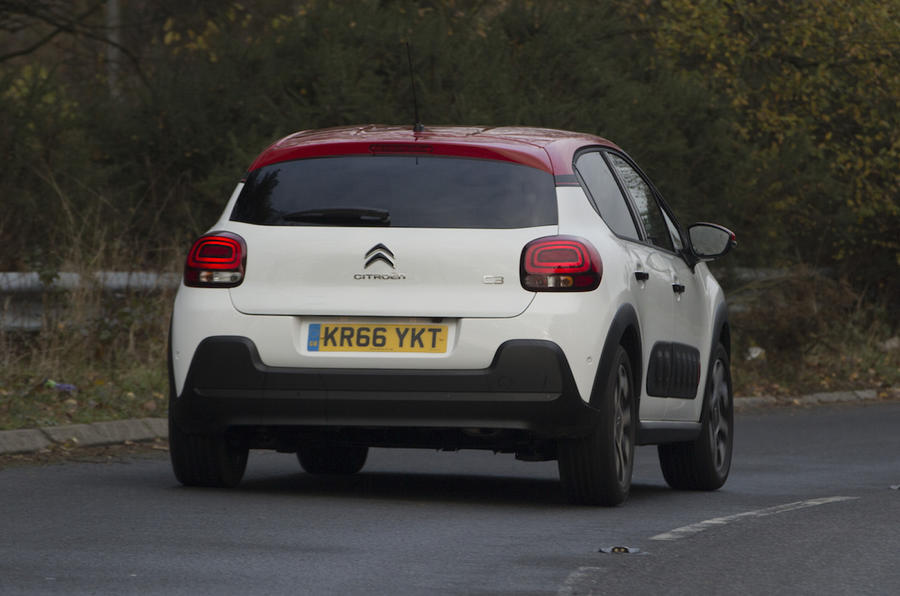 Citroën took the unusual decision, in a modern car market in which manufacturers normally only consider that firmer suspension and ‘sportier’ handling can possibly represent progress, to soften the C3’s suspension for this new version, and also to extend the car’s suspension travel for a more loping, laid-back, old-school-Citroën ride quality. The idea is worth applauding, as would be the execution had it been done with a little more skill and care.

Trouble is, the new C3 only manages to make a virtue of its softness on certain roads and at certain speeds. Its ride is underdamped and poorly isolated when the asphalt turns sharp and choppy and allows too much body movement on country roads for the car to really feel at home on them.

Light, reasonably direct steering makes the C3 an easy car in which to flit around town, where its chassis has the long-wave absorbency to deal with speed bumps particularly well. But at higher speeds there’s too much roll and bounce in the suspension to make the car able to deal assuredly with what a relatively testing British B-road might throw at it. Handling is never insecure, but it feels somewhat imprecise, with over-assisted steering and slow directional responses making your sense of control a bit vague when cornering at the national speed limit.

You can file the shift quality of the C3’s five-speed manual gearbox under ‘vague’, too – as well as baggy and overly long of throw. But the car’s range-topping petrol engine is certainly impressive. It operates with a familiar hint of turbo lag at low revs, although nothing too problematic, and comes up with plenty of torque to motivate what isn't a particularly heavy supermini - hence the sub-10.0sec 0-62mph claim, which feels easily achievable. The three-cylinder motor runs a bit roughly around idle but smooths out nicely and shows off plenty of mechanical charm as it revs. Our testing suggested that a real-world fuel economy claim of better than 50mpg, in mixed urban and extra-urban use, would easily be achievable. In upper-level trim as tested, and with Citroën’s range-topping petrol engine, the C3 may not be the bargain you might have expected it to be. You might think you quite fancy one - but you could have a five-door Mini Cooper for only a couple of hundred pounds more than this particular example, neatly summing up exactly how much you’ll need to like Citroën’s fresh take on urban supermini chic to actually buy one.

Downgrading to a mid-spec Feel model means going without the air bumps, though – as well as cutting out some of the options that add colour and life to the interior. Meanwhile, there can be no doubt that this turbo petrol engine is the pick of the C3 range.

Those who really like the car’s plucky newfound charm and who aren’t discouraged by discovering that the C3 hasn’t quite become a class-leading supermini overnight would be well served by waiting until the rush has abated to open negotiations with their local dealer – and driving their bargain hard. They’ll end up with a car that doesn’t often excel but certainly has its moments, and compensates for its shortcomings with plenty of likeability.

Seems a very likeable car to

Seems a very likeable car to me. Shame they couldn't engineer a new platform for it, but Citroen are headed in the right direction with this.
fadyady 13 December 2016

Somebody should have adbised Citroën to keep this flamboyant styling for the DS3. The C3 is a bread and butter supermini that could do with discreet styling. I'm sure there would be takers for this but just saying.
typos1 13 December 2016

The "floating" roof no more

The "floating" roof no more works on this car than it does on the C1 - on both cars its clearly paint or a sticker and NOT properly designed floating roof, so, on both cars it just looks cheap and stupid. What it very definitely does not do is make the cars look like they actually have floating roofs, it simply makes them look like Citroen has tried to pretend they have them on the cheap and failed miserably.
stumpys182 13 December 2016

I don't think for a moment

I don't think for a moment that Citroen are trying to pass it off as a 'floating roof' as they actually refer to the option as a 'bi-tone' roof on both C1 & C3, as well as C3 Picasso and DS4. It is, essentially a roof painted in a different colour, with a slightly naff black vinyl strip to cover the paint lip. On this occasion, I think its Autocar that have chosen (badly) to use the floating term. Citroen did use the floating roof idea to good effect on the DS3, but this is not anything like that idea.
View all comments (8)