From £14,2159
The replacement for the UK's biggest-selling car has a lot to live up to; how does it shape up?
Open gallery
Close

Launched in 2008, the outgoing Ford Fiesta must go down as one of the most successful cars ever built by Ford, not just in Europe, but globally. In the UK, it’s been the best seller in its class for the past eight consecutive years and one million have been sold in the UK in total.

Its replacement is larger, but not by much, at 70mm longer and 13mm wider. The exterior design isn’t a step change, either - more a subtle evolution of the existing shape, and unlike the bigger Ford Focus, you can still choose between both three and five-door versions. The main news is that the interior has been given a major overhaul.

The old audio unit, with its slightly bewildering array of buttons, has gone and in its place there’s a large, slightly incongruous 8.0in floating touchscreen on the dash. Plenty of technical options are available, too, including a full suite of advanced driver assistance features, including automated parking, cruise control and pre-collision assist with pedestrian detection.

Core models are the entry-level Style and Zetec, with the rest of the range split into two threads: sports and luxury. Sports models include the ST-Line and ST-Line X, with the 197bhp ST due next year. The luxury models comprise Titanium, Titanium X and the Vignale, which is due later this year. We've previously tested the ST-Line X trim with a 138bhp 1.0T Ecoboost engine. 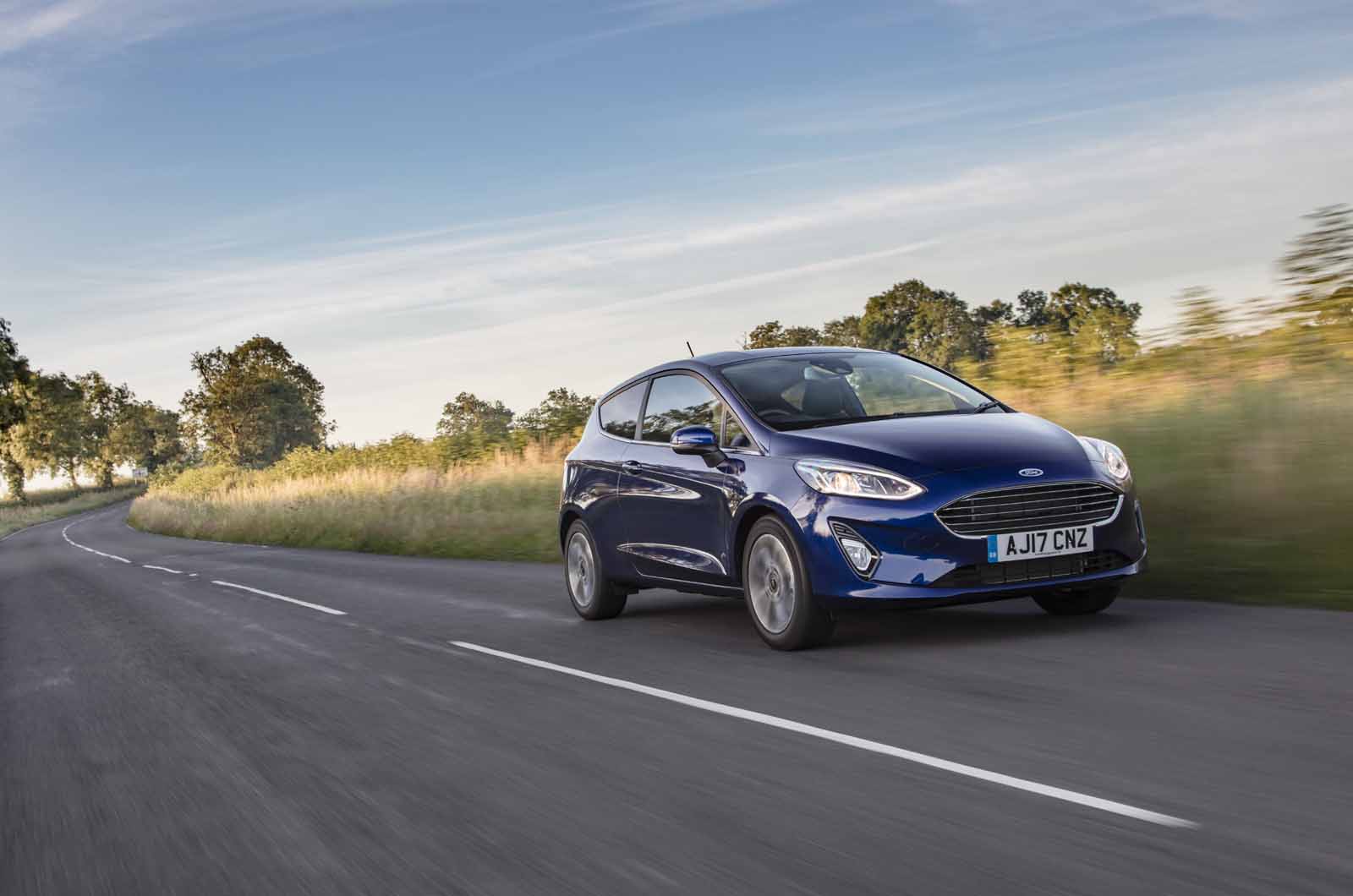 A hook-up with premium audio maker B&O means you can order a Fiesta with a 10-speaker, nine-channel, 675W audio system as an option or by buying specific models, such as the B&O Play Zetec Series or B&O Play Titanium Series.

The engine line-up is championed by the outstanding three-cylinder 1.0T Ecoboost in both 99bhp and 123bhp versions as before. Both come with a six-speed manual gearbox as standard. The 1.5 TDCi diesel has been carried over in both 84bhp and 118bhp forms, despite there being little demand. At the entry level, a 1.1 Ti-VCT naturally aspirated version of the three-cylinder engine is available with 69bhp in the Style and 84bhp in the three-door Zetec tested here. Both come with a five-speed rather than six-speed gearbox

The good news is that the Fiesta’s outstanding handling, ride and steering qualities are unaffected by the increase in size; if anything, they’re even better than before. The steering is light enough for easy parking but loads up nicely in corners to give plenty of feel. Grip is good and that much is telegraphed back through the wheel, making quick drives on twisting country roads fun and confidence-inspiring, even in the wet. There’s little body roll but, despite that, the ride is supple and effective damping ensures there’s no skittering on poor surfaces. As before, brakes are powerful, if oversensitive, and would benefit from more pedal feel.

No turbocharger means this 84bhp engine lacks more than just power; the diesel-like punch of its boosted sisters is also missing when you accelerate. Because of that, response feels sluggish, although speed soon builds up with patience. The naturally aspirated engine is gruffer than the refined turbo versions, too, and its three-cylinder configuration more noticeable.

The interior is where existing Fiesta owners will notice the biggest difference, though. On a purely subjective level, it feels even more spacious and has been decluttered, with far fewer buttons. The 8.0in floating touchscreen fitted to most models is slick and bang up to date, giving access to the Ford Sync3 infotainment system, complete with Apple CarPlay as well as sat-nav and rear-view camera displays when fitted. 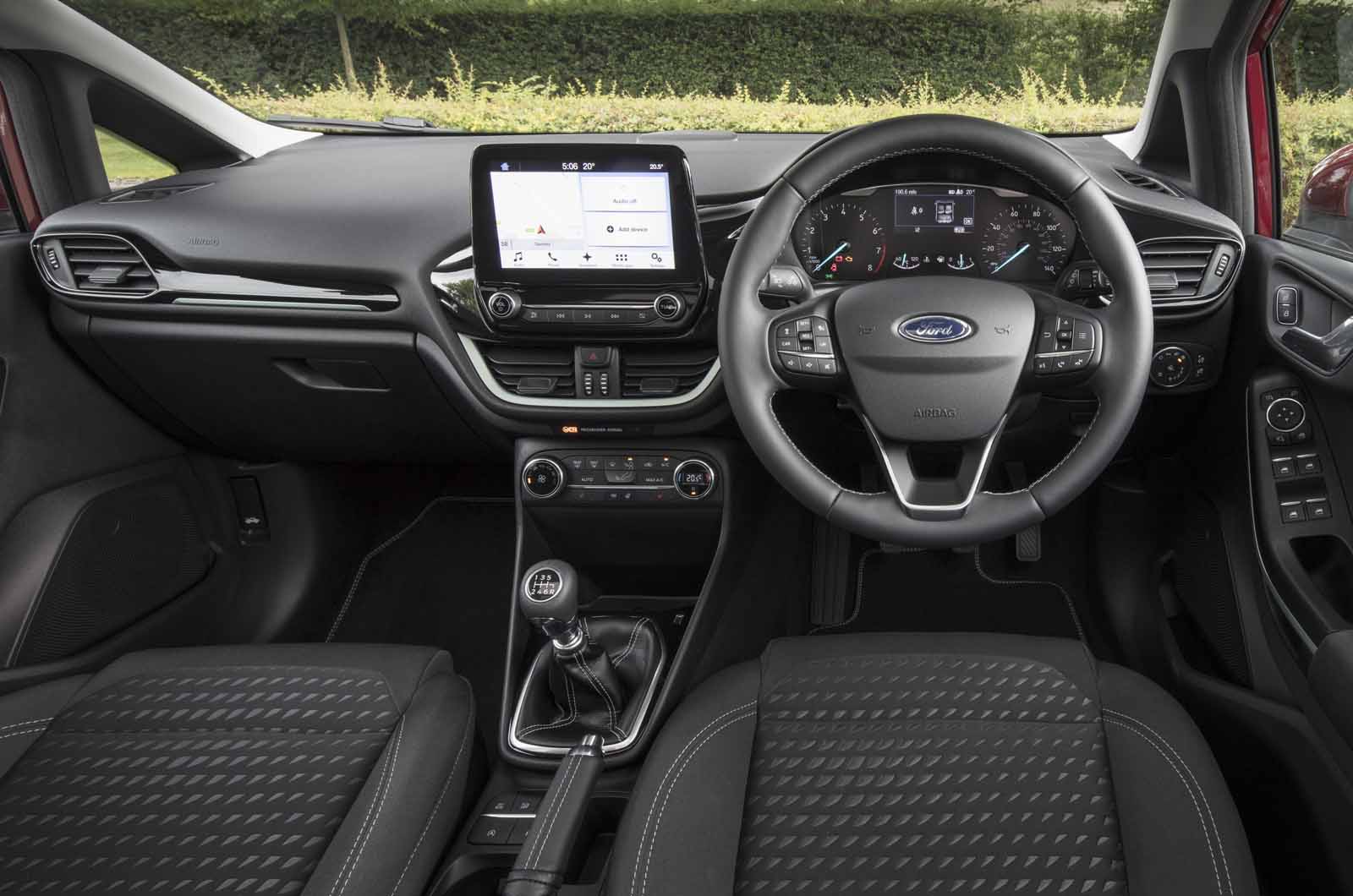 The 84bhp Ti-VCT engine is surprisingly capable, considering its small capacity and the absence of a turbo, but most drivers will probably find its shortage of initial go tedious unless driving is confined purely to urban streets or you really do want nothing more than a utility shopping car.

Prices range from £12,715 for the entry-level 1.1-litre Style to £21,225 for the Vignale when it arrives, while the price of next year’s ST has yet to be revealed. If you really are desperate to spend as little as possible and performance means nothing to you, the 1.1-litre Style is probably better value than the higher-spec Zetec driven here.

The three-door, 1.1-litre Zetec costs £14,215 on the road, whereas the 99bhp, six-speed Zetec in the same bodystyle with the 1.0T Ecoboost engine is not much more at £14,795. Since that extra £580 will make the difference between lacklustre performance and arguably the best car in its class that’s great fun to drive, the choice should be an easy one for the majority of buyers.

Every competitor is preferable

It looks awful, the interior is disgusting, and like all Fords it will be both a shit car and an appalling thing to own, sold by an incompetent, unsympathetic and grasping dealer network.

Several references to the 8"

Several references to the 8" screen in this article that suggests all versions of the new Fiesta have it fitted, they don't. It's optional on the trim level tested with no mention made of that.

Had a look over the new range at Goodwood and was pretty impressed. Spec levels are high, too.

Not evolutionary but retrograde styling.

The interior looks not only worse but also more old-fashioned.