The Jaguar F-Pace has been with us for a year now, and in that time it’s impressed the world with its good looks and sporty handling. But its engine range has been rather diesel-biased, with nothing other than performance-focused six-cylinder units drinking from the green pump. That’s now changed, however, with the introduction of an all-new four-cylinder Ingenium petrol engine to the line-up.

On paper, Jaguar's shiny 2.0-litre offers a good mix of performance and fuel economy, linking 247bhp and 269lb ft of torque with claims for 38.2mpg combined. It brings the Jaguar F-Pace’s weight down to 1760kg too – admittedly still no featherweight, but it’s a heady 101kg less than the V6 petrol version, which will only help with front-end response.

The 2017 F-Pace also gains Jaguar’s latest optional - and very good - InControl Touch Pro infotainment system, which costs £2670 and features a 10.1in central touchscreen and a 12.3in digital instrument cluster. The former is significantly more responsive than the old system and has higher-quality graphics, as well as dual-screen pixel technology that allows passengers to do things like watch a film on the same screen that’s displaying driving data or sat-nav instructions to the driver.

While it’s not new to JLR, it’s the first time this tech has been fitted to a Jaguar. For those not willing to fork out the extra cash, the car’s standard system has an 8.0in screen and older software, but it does still get sat-nav and a DAB radio.

Our drive is in an R-Sport trim model with 20in alloys wheels, and it rides very well over the bumps and undulations of British B-roads. The 2.0-litre engine comes mated exclusively to the eight-speed automatic gearbox and with four-wheel drive, so there’s no rear-wheel-drive manual option to really attack these roads. However, the worthwhile £160 option of Jaguar’s configurable dynamics adjustable dampers does help you to make the most out of bends. 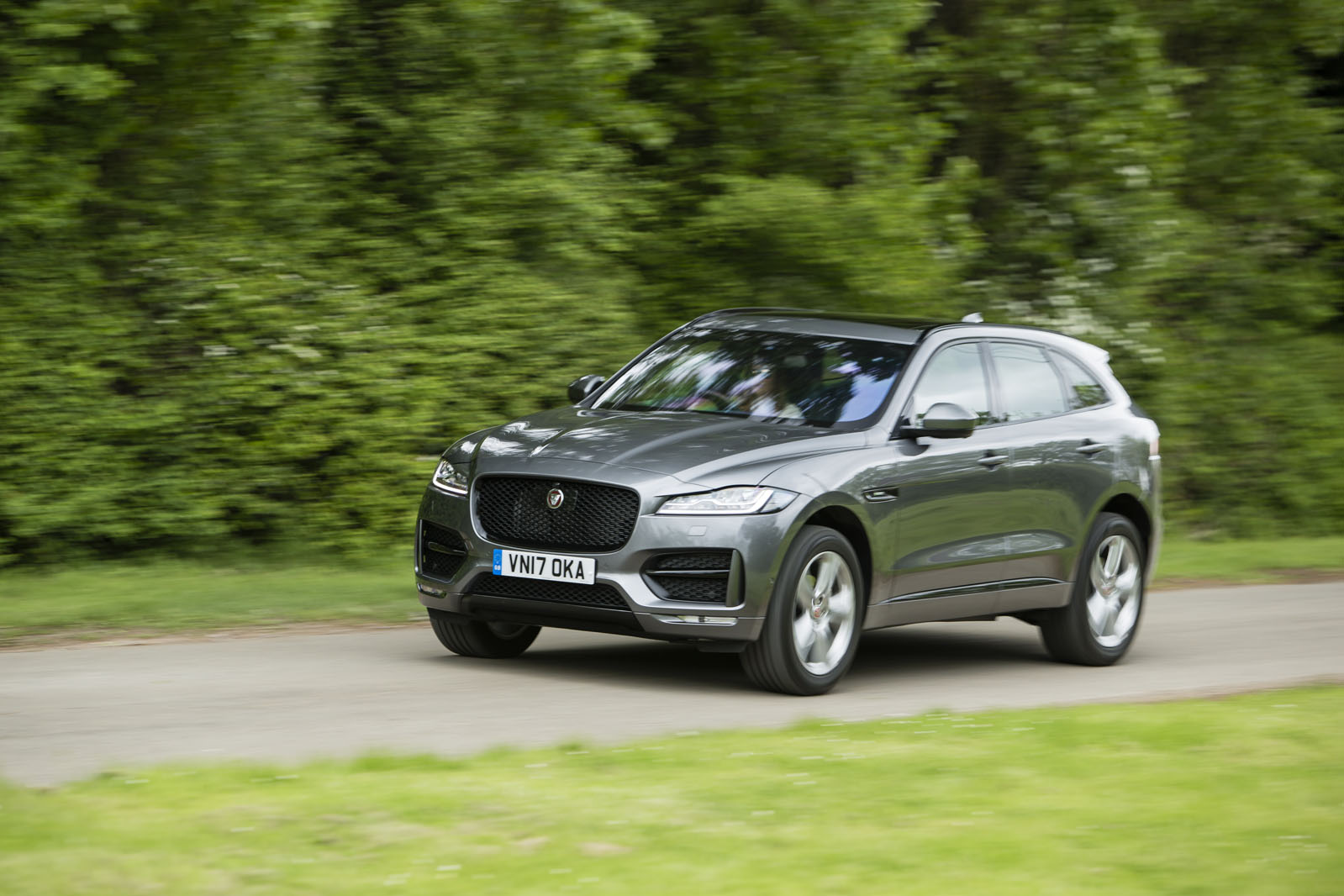 You can firm up the dampers in Sport mode, and with this body control is very good - on par with the class’s best - but the eight-speed gearbox feels a little hesitant to act when the motor is worked hard and can therefore hamper the experience. Downshifts in particular can take about half a second to respond, and while you might be inclined to cut an SUV some slack in this department, the car’s arch-rival, the PDK-gearboxed Porsche Macan, shows how high the bar has been set.

This new engine is more responsive than Jaguar’s older four-cylinder petrols and when pressed can accelerate the car from 0-62mph in a respectable 6.8sec. Next to the F-Pace’s more frugal diesel options, the petrol is clearly best suited to town driving, but point the nose at an open stretch of tarmac and the unit happily revs freely too, although it never reaches the point of feeling particularly quick.

Unlike the diesels, it lacks mid-range grunt – even the four-cylinder diesel has 37lb ft more - so is not so suited to hard motorway work. In its defence, the story is much the same with the four-cylinder petrol Porsche Macan, illustrating that the issue is a symptom of the type, rather than this specific unit.

There is one standout benefit of the new engine when charging along at pace - its lighter weight. It gives the car a nose that resists understeer even more and makes the four-wheel torque vectoring more noticeable when powering through a corner. Like the Macan, the F-Pace does a great job of impersonating a hot hatch when trail braked into a bend, resisting body roll and even lending its back to tighten the line with small slides. But as soon as you get back on the power you’re reminded that the lump up front could do with a bit more torque, confirming that this engine will offer its best in less sporting environments. 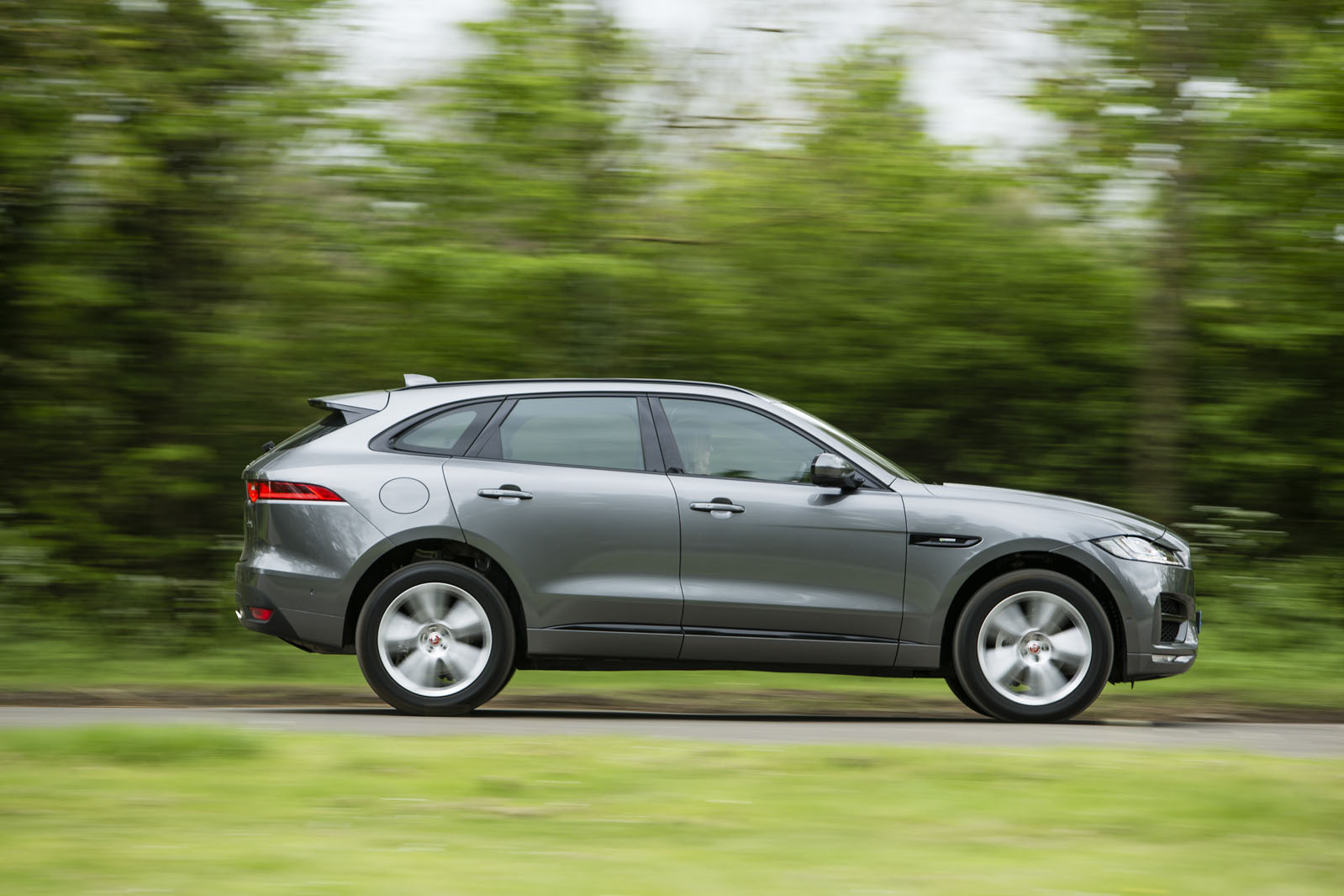 The timing of the Ingenium petrol engine’s arrival in the F-Pace range couldn’t be much better, as public perception of diesels – particularly in urban environments – is at an all-time low. People nervous of impending tax hikes and pricier parking permits may be drawn to a small capacity petrol engine that gives respectable fuel economy and has just about enough poke to be entertaining.

But for those wanting an effortless mile-muncher, the F-Pace’s diesel units – especially the most potent V6 - remain the ones to go for, while the hot V6 petrol is still the driver’s choice. Which is good news, really, because it proves that Jaguar’s latest engine has plugged an empty gap in the line-up, rather than treading on the toes of any existing options.

It serves to make the F-Pace a more comprehensive rival to the Porsche Macan, and extends the line-up to better compete with more conventional SUVs such as the Audi Q5.

Time to stop these munters

Yet another ugly, fat-arsed jeep. Jaguar have no excuse for continuing with these lumpen monstrosities now that they have the XF estate.
david RS 6 May 2017

I was wondering when I'd get to read a test with the petrol Ingenium engine. This is certainly the engine I'd choose
"is not so suited to hard motorway work" - I think the tester has been driving too many supercars, or drives a lot faster on the motorway than the limit, if he thinks a 250hp SUV isn't fast enough.
Turinbrakes 5 May 2017

That's a very good point as I

That's a very good point as I was thinking exactly the same thing. Can't see how this car with almost 250 bhp would not be a decent motorway car, As Mikey C points out, maybe the tester has been spoilt with the V6's and V8's of this world
reckless fox 5 May 2017

I echo Mike & Turin brakes. If 0-60 in 6.8s 'never feels fast' you have the wrong comparators.
Likewise the comment about creating a bit of slide going into corners - a typical journalist bit of idiocy. If I slide my SUV going into corners with my wife and 4 yr old son on board my life is going to be hell, for a while anyway.
Why do Autocar have to review every car as if was a sports car instead of thinking about who buyers of this type of car are likely to be.
I have a Q5 TDi now (bought before the F Pace was launched) but don't want another diesel and this looks just the ticket for my next car.
View all comments (14)