It may seem somewhat oxymoronic but this particular DS 7 Crossback is not only the greenest version of the French brand’s curiously mid-sized styled SUV, but it’s also the quickest. This is the 7 Crossback E-Tense 4x4: the long-awaited plug-in hybrid variant that can supposedly hit 62mph from a standstill in 5.9sec, emit just 33g/km of CO2 on average and manage a WLTP-certified combined fuel economy of 235mpg.

With moderately potent plug-in SUVs becoming increasingly common, so, too, are the similarly broad spreads of alleged ability that come with them. Volvo’s XC60 T8 and Audi’s Q5 TFSIe manage to conjure similar on-paper stats, although recent experience highlights that if you fail to stay on top of keeping their batteries charged, real-world average economy can easily drop into the 20s. The same will no doubt apply to this new 7 Crossback.

Anyway, its technical spec makes for relatively familiar reading. Up front, there’s a 197bhp version of the PSA Group’s 1.6-litre four-cylinder petrol, which is paired with a 109bhp electric motor. Both drive the front wheels via an eight-speed automatic transmission, while a second, 110bhp electric motor at the rear axle endows the DS with four-wheel drive. Combined, these three engines make for a total system output of 296bhp and 332lb ft.

The electric motors draw their power from a 13.2kWh battery, which is housed beneath the floor so as not to intrude on rear passenger room or boot space. Without its petrol motor running, DS claims, the E-Tense should be able to travel between 34 and 40 miles on electricity alone, at speeds of up to 80mph. 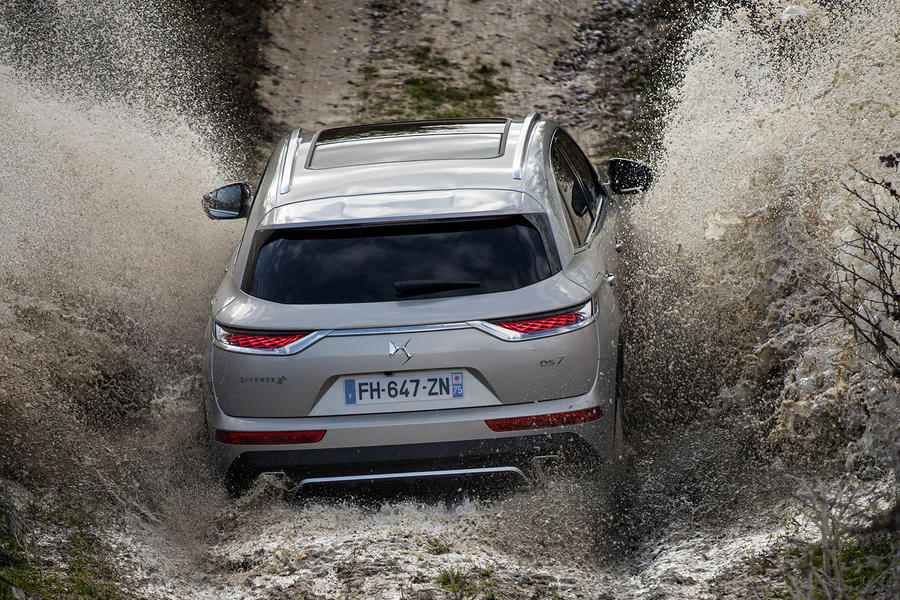 The powertrain is, err, curious. At low speeds and under low loads, it operates well enough, with the electric motors providing the smooth, accurate style of acceleration you’d expect them to. Provided you kept the battery topped up and were able to complete most of your journeys using these motors alone, progress would be pretty smooth, if not particularly swift. However, bury the throttle pedal a little deeper in a bid to rouse the combustion engine from its slumber and things soon begin to unravel.

First of all, the transition from electric to petrol power isn’t exactly seamless. There’s not only a noticeable bump as the 1.6-litre motor begins to perform the lion’s share of the work, but in this application, the engine also seems to be roughly on a par with a cheap bottle of red for refinement. A conspicuous amount of vibration passes through the steering wheel, even under light throttle loads, and the engine itself has a tendency to make its presence heard even when sitting still. The transmission can hesitate when you hit the kickdown switch, too.

Admittedly, the test car we drove wasn’t quite up to full-production specification. Given that the PSA Group’s petrol motors tend to be rather sweet, mechanically refined things, perhaps there’s a chance that these issues will be addressed. We’d certainly hope so. But in its current guise, this powertrain isn’t on the same level as what you’d get in a similarly priced Audi Q5 TFSIe for mechanical refinement.

Then there’s the way it rides. The 7 Crossback has always erred on the softer side and the additional weight of its two electric motors and battery pack (nearly 400kg) doesn’t do it any favours. At speed, this extra mass seems to make it tougher for the car’s suspension to bring its vertical body movements back under control - a characteristic that is amplified on particularly undulating roads. Its damping doesn’t seem quite as sophisticated as it should be, either, with scarred stretches of road being capable of sending fairly noisy, sharp-edged thumps through the cabin.

In corners, there’s a lot of body roll and front-end grip is a limited commodity. Couple that with steering that’s slow, not particularly communicative and really quite light, and the result is a car that doesn’t inspire much in the way of confidence through corners. Admittedly, the Q5 makes its mass felt in such instances, too, although it makes up for this with marginally more committed grip levels and a more assertive, quick-witted steering rack.

The 7 Crossback does have a more distinctive sense of identity about it, with the cabin in particular offering a more visually interesting design than that of the Audi. Even so, it’s the Audi’s that feels like the sturdier proposition in terms of material richness and build quality. As for space, with a panoramic sunroof specified, the DS doesn’t quite offer the same level of rear head room as the Q5, but leg room is nonetheless good. Boot space stands at a very useful 555 litres, too, especially compared with the Audi’s fairly woeful 395-litre effort. 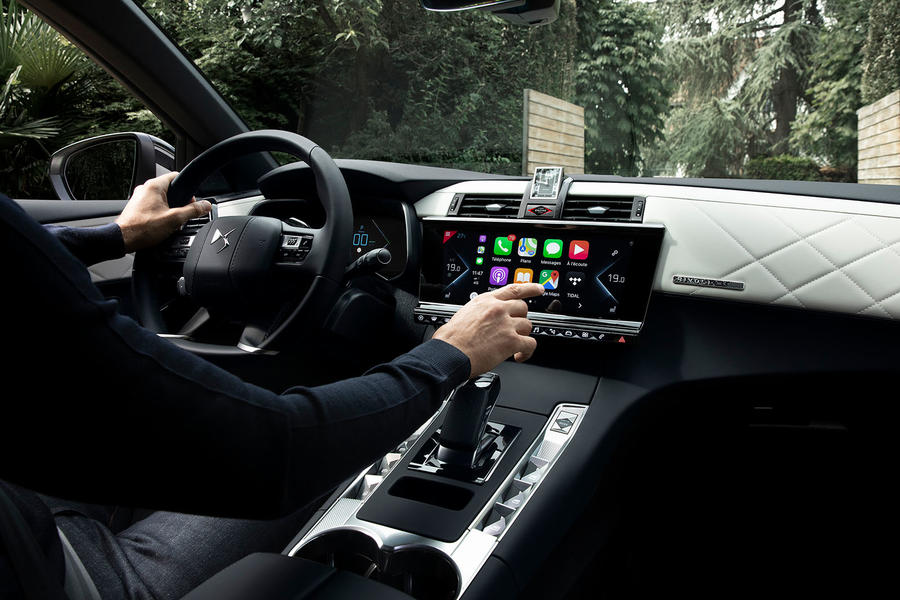 Even so, based on this drive the DS 7 Crossback E-Tense is a tough car to recommend. Aside from outright practicality, an Audi Q5 TFSIe outperforms it in pretty much every respect, and on the grounds of its refinement and dynamic capabilities, it’s leagues ahead.

Admittedly, the DS does claw back some territory when it comes to price. In Performance Line guise (which is expected to be its most popular trim level) it starts at £47,725 versus £49,735 for the 295bhp version of the Audi Q5 TFSIe. Our range-topping Ultra Prestige model, however, weighs in at a tough-to-swallow £56,075.

Hopefully, DS will sort the associated refinement niggles out in time for next year’s customer deliveries. Nevertheless, until we get a chance to test a fully fledged production-spec model on UK soil, it would seem that DS - which will offer only electrified models from 2025 - has a bit of work to do yet. 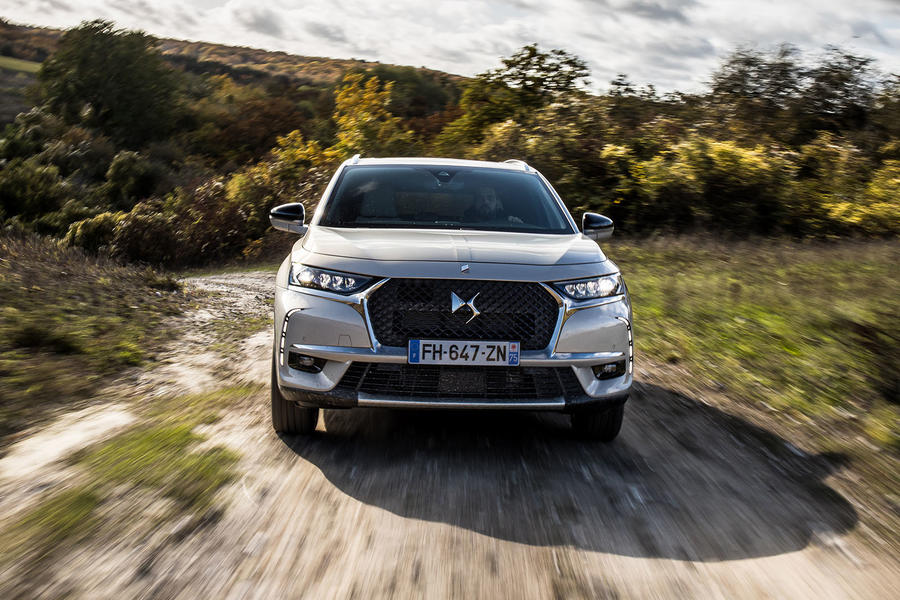 ... ridicule a fine SUV by testing a pre-production version.

Quite possibly, the worst car brand in the world.
Rick Maverick 18 November 2019

.... have you driven one? Check USER reviews, come back after.