From £28,0956
It was the source of transport for French president Emmanuel Macron's inauguration, but can the DS 7 Crossback stand out in a crowded compact SUV segment?
Open gallery
Close

This is the DS 7 Crossback – the almost inevitable assault by DS Automobiles on the compact SUV hierarchy.

You might have seen its global dynamic debut in the news, because it was via a bespoke DS7 Crossback that French president Emmanuel Macron made his way to the Champs-Élysées during his inauguration. We too have experienced this car before, but not on UK soil.

As a product of the luxury arm of PSA Group – comprising Peugeot and Citroën, along with DS itself – it’s aimed more squarely at the likes of the Range Rover Evoque, Jaguar E-Pace and Audi Q3, rather than your Nissan Qashqais, Seat Atecas and Renault Kadjars.

To help the 7 Crossback’s cause, DS has shoehorned in so many features that it’s difficult to know where to start. Alongside semi-autonomous driving programs, night-vision and aesthetic elements intended to capture French ‘savoir faire’ both inside and out, the 7 Crossback is also the first among its peers to use active suspension. The broad idea is that you’ll be tempted away from more established rivals by the car’s fresh take on combining old-school luxury with the latest technology. 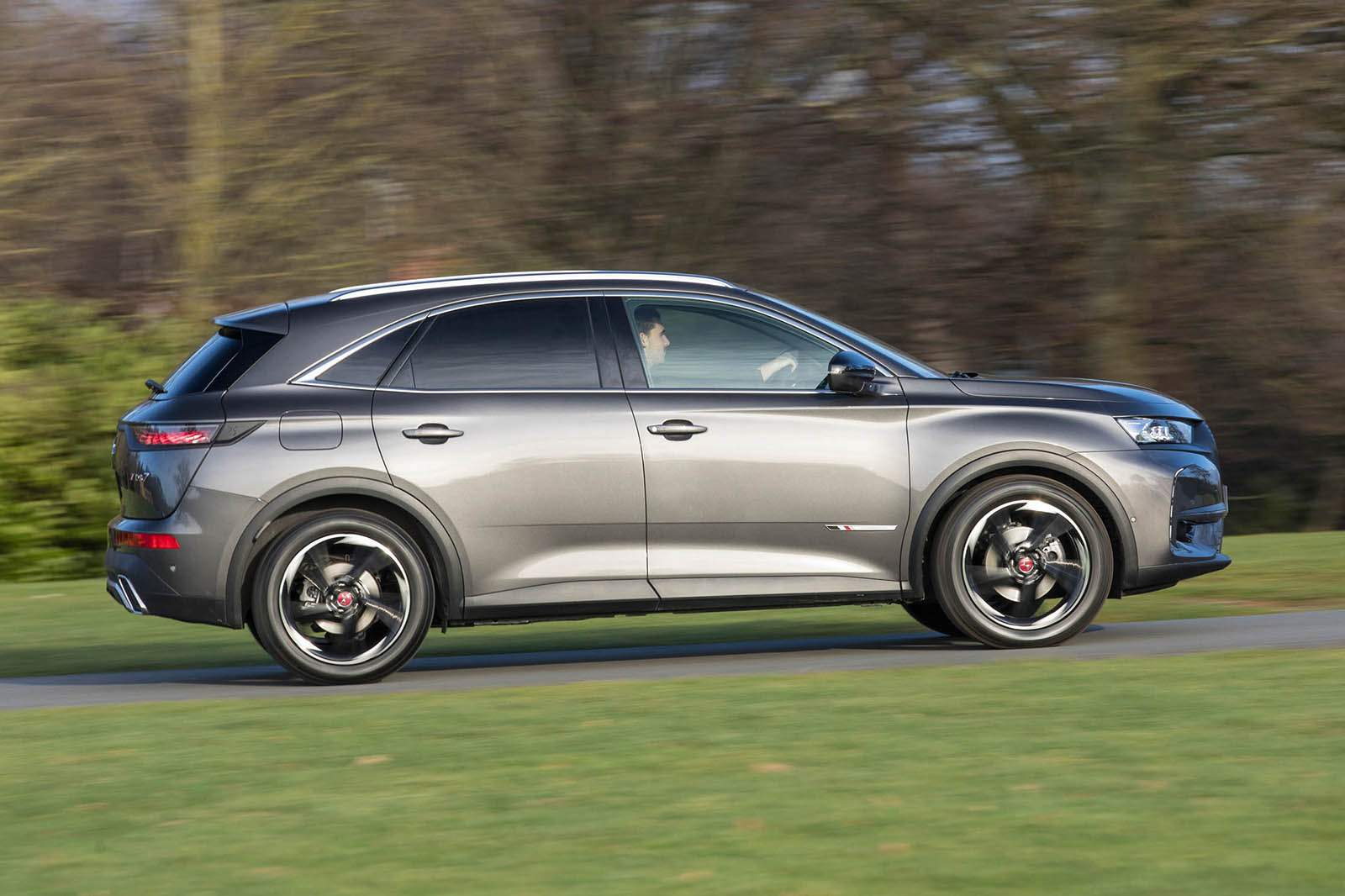 Alas, for all the Breguet-inspired detailing and swivel-eyed LED headlights, this is a familiar product that's built on the same modular platform as the Peugeot 3008 and offers front-wheel drive with a choice of PSA’s existing turbocharged diesel and petrol engines.

Furthermore, the assertion that the 7 Crossback possesses a ‘unique personality’ lasts only as long as it takes to realise its general proportions, and particularly its deadpan front-end styling, closely mimic the Audi mentioned earlier. Is it handsome? In a square-jawed fashion, perhaps, but it relies heavily on jewellery in the form of three-dimensional LED lights and plenty of chrome – or gloss-black if you go for mid-ranking Performance Line trim.

In terms of hardware, an Aisin-sourced eight-speed automatic gearbox is your only choice if you want the 222bhp 1.6-litre turbocharged petrol engine or the 178bhp 2.0-litre BlueHDi diesel. There’s also a six-speed manual available for the 128bhp 1.5-litre diesel, and, during 2019, a 300bhp plug-in hybrid with four-wheel drive and an asking price of around £50,000 will arrive.

Given this is a car bearing a DS badge, we should first address ride quality, which is in general very good. Lateral body movements are nicely controlled and a sense of stability and competency pervades, but at the expense of agility (an attribute hardly helped by the oddly heavy steering).

Active suspension comes as standard (apart from the entry-level Elegance model) and isn’t as radical as the hydropneumatic technology not quite pioneered by the original DS of 1955. But it does work – superbly at times. It’s a predictive set-up with a road-scanning camera. Its lens is tucked behind the rear-view mirror and, along with various sensors and accelerometers, it feeds the ECU with data, allowing it to prepare the adaptive dampers for troublesome topography with as little as five metres warning.

Operational only in Comfort mode, it has a tendency to make the 7 Crossback feel under-damped on undulating roads but most of the time removes passengers from the road really rather neatly, both acoustically and physically. It’s certainly an option worth having. 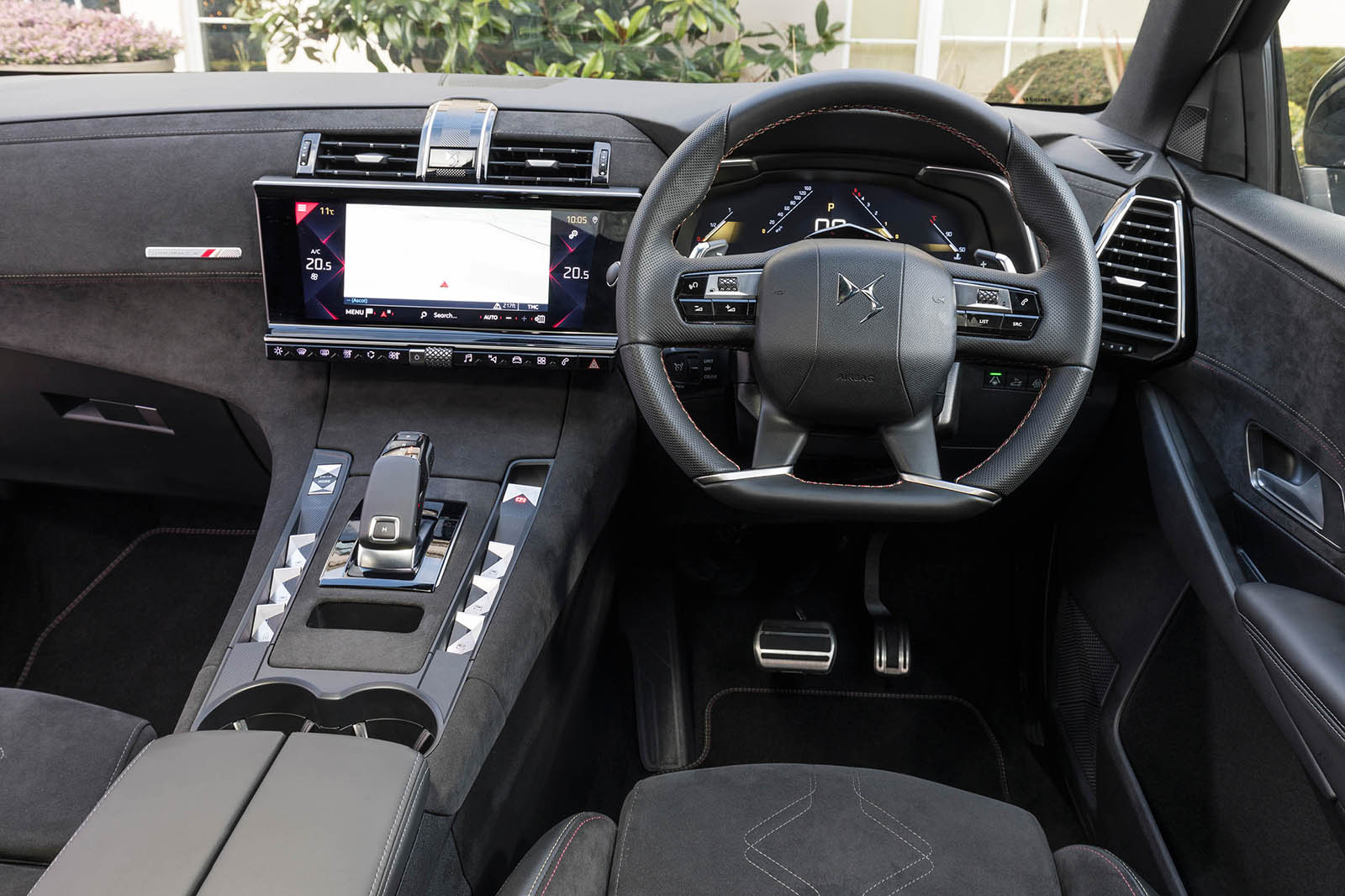 The other prong of the DS attack is the luxury of its interior, which can be trimmed in either Alcantara or nappa leather depending on spec level and boasts a high, wide transmission tunnel and a deep curvature linking the doors to the bulkhead. A 12.3in touchscreen is standard on all but the lowest trim level and there are oversized toggle switches flanking the gearlever.

It’s an interior that exhibits some lovely touches – pearl stitching, guillochage engraving – but it can feel overwrought; in some ways, the cleaner architecture of a generously specified Peugeot 3008 is more authentic. There are also some suspect plastics that you’d have to search harder to find in most rivals.

Given the way the 7 Crossback cossets it occupants, you might think that it’s short on space. In fact, the opposite is true; there is unusually generous space for those on the rear bench and 555 litres of load capacity with all the seats up. 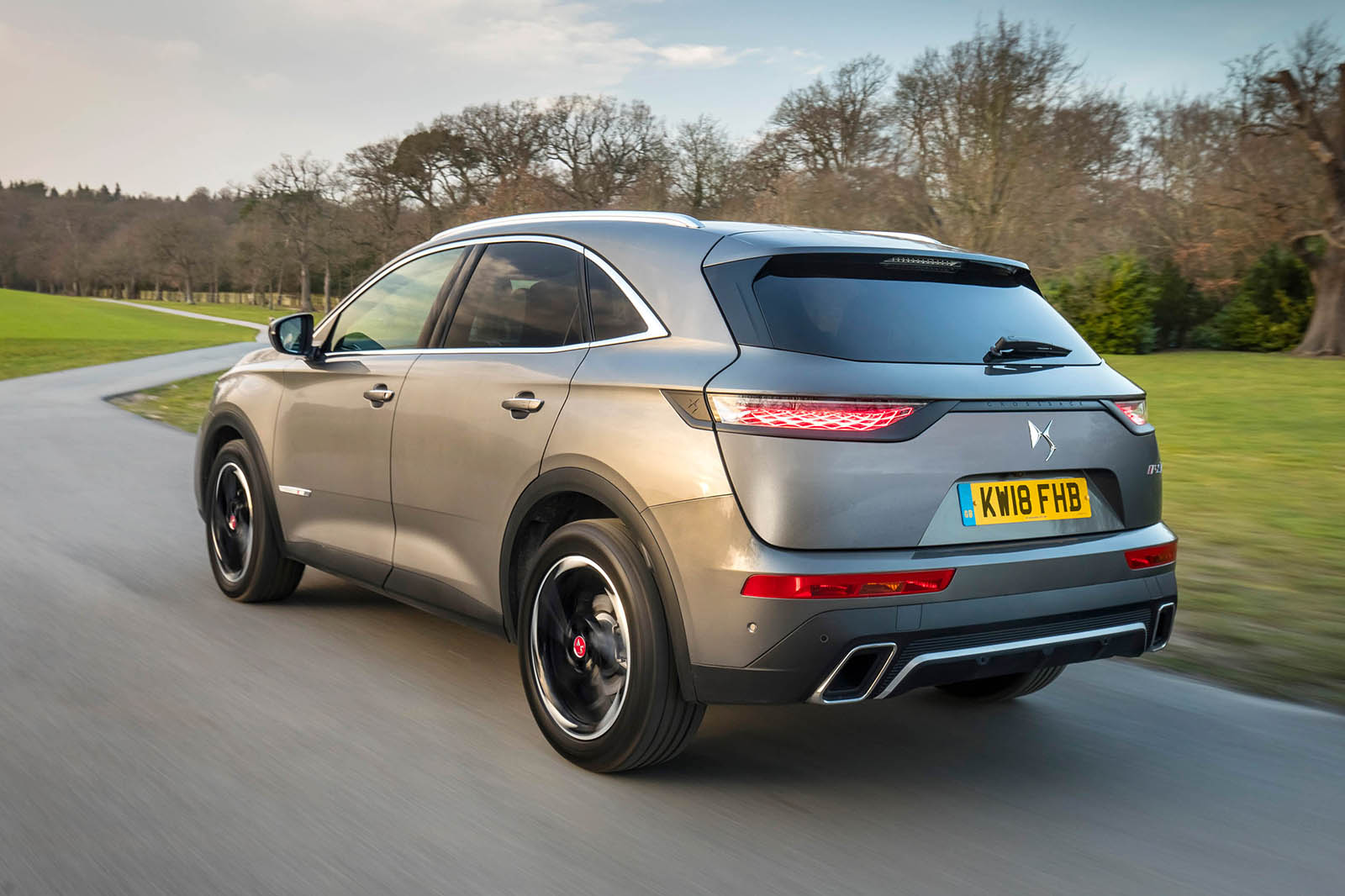 Ultimately, however, there remain too many compromises for a relatively expensive car. The entirely digital, matte-finished instrument binnacle looks fabulous but isn’t easily legible, the seats are sumptuously appointed but under-bolstered and this diesel engine pulls smoothly but is too present too much of the time. Worst of all, removing the bulk of the switchgear may have led to a pleasing aesthetic, but the touch-sensitive substitutions too often seem either overly sensitive or not sensitive enough.

These things aren't what you’d call terminal – they’re fodder for the facelift – but it’s frustrating nonetheless and hard to forgive at this level.

In some ways, DS has an impossible task. Of such a storied marque we demand innovation and originality, and yet deviating too far from the norm in this segment must seem outrageously foolhardy to the brand’s product planners. Remember, though, that the Range Rover Evoque and more recently the Volvo XC40 have each pulled off the same-but-different trick – and done it well.

To its detriment, the French car is very much priced to rival those cars. In the specification you’d want – with the automatic gearbox and in Performance Line, which, unlike Elegance, includes active suspension, adaptive headlights, digital instruments and the 12.3in touchscreen – the 7 Crossback will cost you at least £35,000.

If it was especially rewarding to drive, that might not seem such a large sum, especially taken alongside the practicality on offer and an undoubtedly plush interior. As it stands, however, the 7 Crossback is difficult to recommend in a fiercely competitive class. 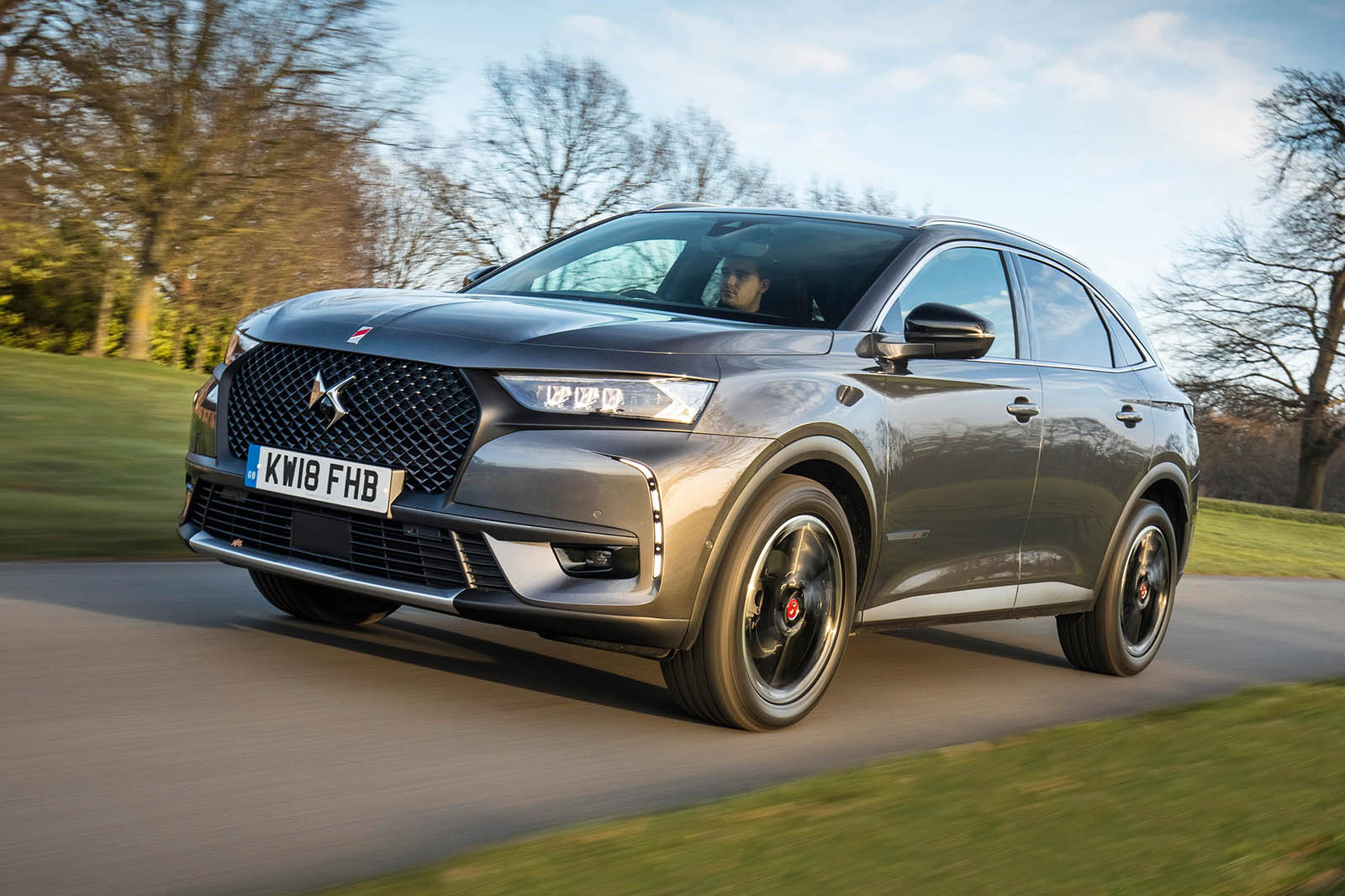 I quite like the exterior styling and was eager to see the interior.... and my eyes started bleeding. They clearly went out and got the second biggest iPad they could find and glued it to the dashboard, those things I asume those are switches along the centre console which look awful and what the hell is with the 1970's Atari videogame instrument cluster? Call me old fashioned but I love me some analogue dials (I'll even take those weird digitised ones) The thing that would have finished me off would have been that tiny hexagonal steering wheel from the 3008 but, nothing's perfect I suppose.

This DS seems to show many a traditional French USP; comfortable and relaxed ride quality; lots of space;handsome,  and arguably very good value for money.

It is a very brave manufacturer that can decide not to follow the markets demand for SUV considering the profit available. It is churlish to criticize DS for this and not appreciate how every marque benefits from it, enabling more investment for product that enthusiasts will love.

Yes it looks like another French bloomer almost matched by your vehicle stats with the power and torque figures the wrong way around !