From £28,0956
New French luxury SUV looks derivative but is refined and fairly lavish. It's appealing in its way but lacks the completeness to easily justify its price
Open gallery
Close

The DS 7 Crossback signals an apparent change in philosophy for the PSA Group’s fledgling luxury brand.

This is a car that’s ‘avant-garde’ in some of its details and features only. Otherwise, it’s a fundamentally – almost tediously – familiar sort of offering: yet another upmarket compact SUV among the rash of them introduced over the last couple of years seemingly by every European car maker with ambitions of growth. As such, this upmarket SUV, and the shift in thinking it represents, could prove to be the making or the undoing of DS Automobiles.

If things go well, of course, the 7 Crossback will be the Jaguar E-Pace-rival that will spearhead its maker’s transformation from relative obscurity to established global market success. Having tested the water with a couple of genuinely interesting, if troubled, introductions that have largely fallen on deaf wallets so far this decade (think the 5 and 4 Crossback), DS appears to have concluded that its customers don’t actually want innovative cars at all; rather, largely conventional ones with some innovative features, made with just a dash of identifying flourish.

As much as fans of a varied car market may regret it, that's what the new 7 Crossback amounts to. It’s a car which, you couldn’t fail to conclude, owes far too great a debt to the styling of Audi’s smaller Q-badged models to be considered original, but one which does have plenty of remarkable technological and material lures about it and does rolling refinement and material richness as well as any big French car of the last decade. 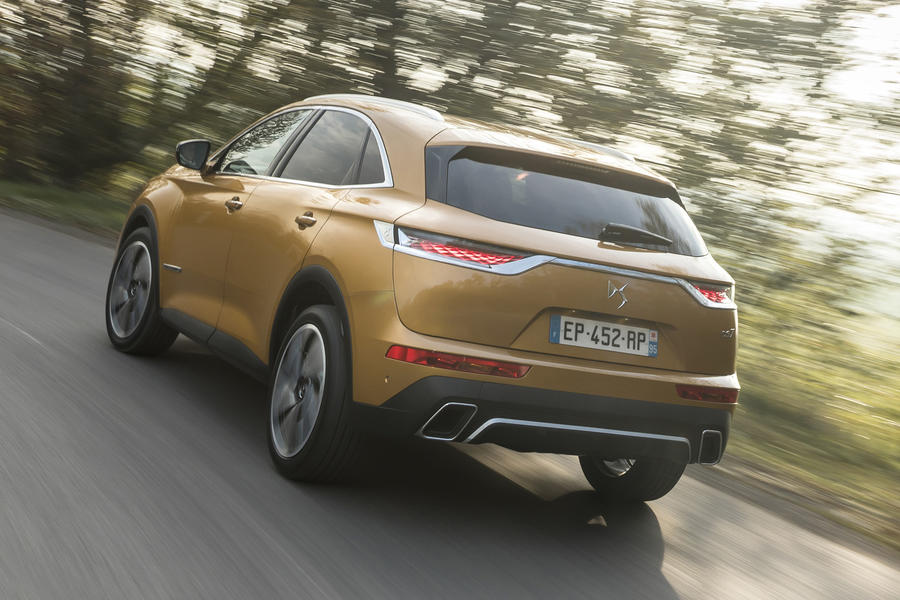 Built in the same factory as the Peugeot 3008 and on the same EMP2 model platform, the 7 Crossback is a front-wheel-drive SUV available with a choice of 1.5 and 2.0-litre diesel engines or a 1.6-litre turbocharged petrol. A range-topping petrol-electric plug-in hybrid version with 296bhp and four-wheel drive will join the range in 2019.

But it’s what’s in the 7 Crossback's cabin, and what’s going on inside its wheel arches, that DS makes its boldest claims about. Designed with more style than that of any existing compact premium-branded SUV and appointed with greater lavishness than most, the car's interior can come upholstered in nappa leather or Alcantara depending on trim level, and with massager seats and colour-adjustable ambient lighting. Adaptive LED headlights are standard on all but the entry-level model, a night vision camera is an option and a full suite of active safety systems is available.

DS’s big push is clearly to give this car a distinguishing, tech-rich kind of luxury appeal. It’s an effort crowned by a segment-first active suspension system (standard on high-end trim levels and optional elsewhere) that combines a forward-facing camera with adaptive dampers to perfectly adjust the car’s suspension for the road surface it’s about to cover.

This DS Active Scan Suspension system is only truly active when you’re in the car’s Comfort driving mode, and it was much more effective on the test cars we drove when combined with 19in, rather than 20in, alloy wheels. But at its best, it gives the 7 Crossback a particularly supple and absorptive ride that’s also quiet.

The 7 Crossback handles very competently, too, even in Comfort mode, with decent grip, steering precision and lateral body control.

Our BlueHDI 180 diesel test car’s engine is fairly muted and torquey at low and middling revs, becoming more loud and coarse above 3500rpm. Its transmission works quite well in laid-back mode, but less well – and with the odd hint of shunt – when hurried. The performance level is more than adequate but won’t be a selling point.

The interior, meanwhile, is one of the car's highlights and one of its low points. Where DS has put effort in – with the attractively stitched leathers, decorative switchgear and 12in widescreen colour infotainment system, for example – the 7 Crossback begins to justify the prices that are asked for it. But there are too many ordinary-looking and feeling mouldings used in places to see that process through.

Likewise, there are too many frustrations in the operating capacities of the driver assistance systems; too baffling an array of digital instrumentation layouts, most of them plainly preferring contrived style to legibility; and too slight a sense of spaciousness in the front seats.

We tested out many of the advanced driver assistance systems that DS uses to distinguish the 7 Crossback from its competitors but weren’t particularly impressed with any of them. The car’s ‘piloted’ lane-keeping assist system is unhelpfully fussy about keeping the car dead-centre in its lane; its adaptive cruise control offers no option to automatically adjust your cruising speed as posted limits change (whereas others do) and won’t automatically stop short of undertaking traffic in an outside lane (where others will); and the graphical resolution of the various parking and night vision cameras can be surprisingly poor.

In the 7 Crossback’s defence, it offers better second-row passenger space than many of its opponents, and boot space is a useful 555 litres. But anyone paying a premium-level price has a right to expect much more from the interior than that, and better seating comfort than the slightly flat and hard-cushioned front seats provide. 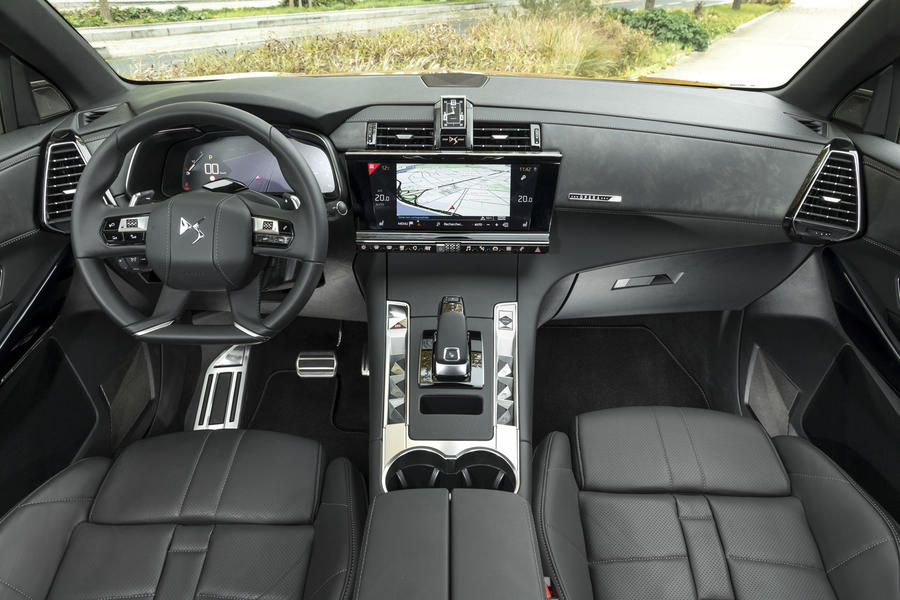 It’s been a very busy year for the new cars like this, and our first impression is that there are probably now several more consistently classy, premium-worthy small SUVs among the 2017 crop than this, as well as more attractively priced leftfield alternatives to the obvious German picks.

The 7 Crossback’s fresh take on modern metropolitan SUV luxury is appealing in its way, but its scope of originality is disappointingly limited, and it remains to be seen how many customers will be willing to stump up Range Rover Evoque-level cash in return for it.

You sense the DS brand’s search for its lasting identity and proper place in the modern car market won’t end here. 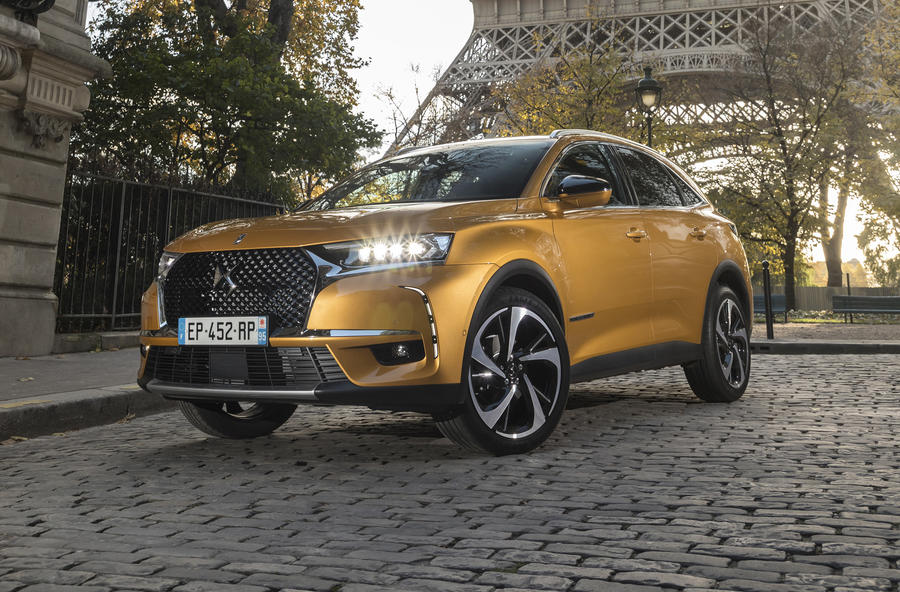 So, we re going back to the

So, we re going back to the Audis with extra tinsel Citroen look from  a few years back, so much tinsel this time that we go from bland to hideous. At least the interior is a bit interesting, but really, the Citroen/DS badge does not deserve to be on this horrid thing, as I ve said before with great sadness, this once great marque should be put to rest if all they can come up with is this dross.

hmm not sure about this review

Lots of critical writing style but little evidence why its materially worse than something else. It certainly has something differnet about it - suspension interior but that the the nub of the criticism. I always think that VWs also have lots of so so plastics if you look exposed painted window surrounds etc and yet these seem to be overlooked. The comfortable ride option is something worthy of receomendation. The interior will entertain and with time become familiar.

Funny how the review talks about the car not being innovative enough, when the roads are full of Q-something and X-something. And when PSA clearely stated that they want to be present in the areas with large volumes.

Grated, from the outside it looks derivative - if you ignore the chrome and the LEDs, it's just another me-too Q-something. A missed opportunity for DS, they probably wanted to play safe but it won't help them buling a brand identity. Actually some of the concepts they released before this looked better in that sense.

But the interiour is from a different planet compared to its direct rivals. There is really no comparison with X1, Q3 or E-Pace. I would take the DS7 over those any day or night.