8
Share review
The Audi RS4 Avant covers ground like few, if any, other estate cars, but it doesn’t involve you all that much in the process
Share
Open gallery
Close

The Audi RS4 Avant operates in a rare old sphere of fast compact executive estates that involves only it and the Mercedes-AMG C63 Estate. There’s no BMW M3 estate and, as yet, no sign of an Alfa Giulia Quadrifoglio with a square back, either. So if you want a fast, smallish dog carrier for £60k or so, here you are.

Now in its fourth generation, the RS4 also leaves the C63 as the only V8-powered car in this class. Like the RS5, the new RS4’s engine has been downsized to a 444bhp 2.9-litre twin-turbocharged V6, rather than having the previous generation’s charismatic naturally aspirated V8.

This drives through an eight-speed torque-converter automatic gearbox, to all four wheels, in a body given a bit more chunkiness and cooling and 30mm-wider wheel arches.

The quattro four-wheel drive system puts 60% of power to the rear wheels under normal driving, but can put as much as 70% to the rear, or, 85% to the front. This is the kind of system intended to make the RS4 more agile. To that end, there’s a ‘sport differential’, an electronically controlled rear differential that can apportion as much power as it likes to either side, as standard.

There are other suspension options, too: hydraulically linked dampers, a bit like those in a McLaren, to reduce roll and pitch. There's also dynamic steering, which adjusts the steering ratio depending on speed, and ceramic brakes. All were fitted to our test car. Other options include a carbon pack at £10k (clue’s in the name). Wheels are 19in or 20in (guess what we got) with 275/30 R20 tyres.

This generation of RS4 is (up to) 80kg lighter than the old one (deep breath: the body by 15kg, engine by 31kg, front and rear axles 6kg each, steering system 3.5kg, sport differential 1kg, quattro driveline 12.5kg, ceramic brakes 8kg and, if you spec them, milled wheels 8kg), but is still a 1715kg car; about the same as the C63.

The two are also within a centimetre of length, with the RS4 at 4781mm long. This is one of those ultra-competitive classes where all of the key numbers are gnat’s widths apart, including a boot of 505 litres (to the C63’s 490). 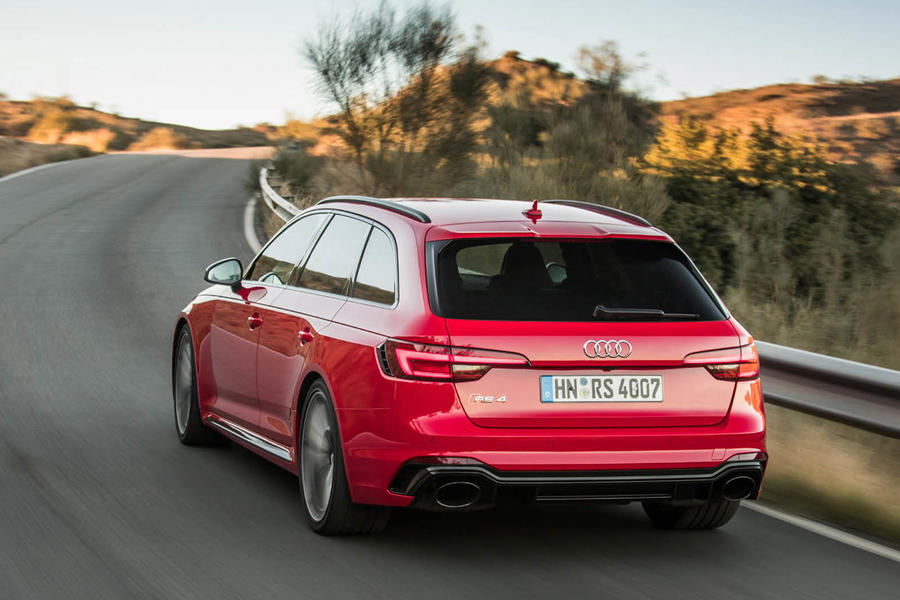 Fast, of course. As well as 444bhp at 5700-6700rpm, there’s 443lb ft, which arrives at 1900rpm and hangs around until 5000rpm, so the RS4 has the kind of table-top power and torque graph that really means you don’t need the ultra-quick upshifts of a dual-clutch gearbox. As we found in the RS5, a torque converter suits the nature of a car a like this, being smooth to pull away and smooth on both up and downshifts.

Remarkably, given the paucity of tyre sidewall, the low-speed ride isn’t so bad, either, while the steering is light and accurate, albeit with the same vagueness of communication as a teenager telling you what time they plan to be home. As a town and, indeed, motorway car, though, where high-speed stability is good and noise levels low, the RS4 is refined, capable and perhaps more comfortable than you’d credit given the appearance and the wheel size.

It’s also impeccably finished inside, as you would expect, with soft-touch plastics and just enough chrome or Alcantara highlights to show you’re in something a bit racy. Flat-bottomed wheels you make our rocking world go round, etc.

When it comes to more interesting roads, though, the RS4 is a peculiar fish. You can swap the drive modes between Comfort, Dynamic, Auto or Individual. In the latter, you can set your own modes for the suspension stiffness, steering weight, engine and transmission response. Consider them all as a whole, though, when I tell you that for scaring the bejesus out of your dog, no other car in this class comes close.

The RS4 has seriously high limits. In dynamic mode there's very little roll at all, and the various driveline shenanigans make the car feel far more agile than you’d think. It grips hard at the front and feels like it pivots very much around its middle, and the sport differential, which presumably under extreme moves pushes quite a lot of the rear’s power to the outer wheel, will do its best to straighten a line on corner exit.

You can feel the mechanicals and the electronics doing things, shuffling here, shuffling there, as they look to maximise grip and, yes, engage you in the process, although the entertainment, and this is an uncomfortable feeling on the road, is that you’re largely astonished at what it can do, rather than particularly involved in the doing it.

It’s eerie. It’s odd, and I suspect the dynamic steering, whose speed changes you get used to but which is always remote, doesn’t help. But it’s very effective. The C63 would be a slower and less agile but, I’m confident, a more enjoyable, more analogue experience.

Slink the suspension into Comfort mode and the RS4 will do all this with a bit more natural-feeling body roll and a better ability to shrug off bumps in a straight line. There’s some odd diagonal pitch while it’s cornering like that, mind, but it makes the straight bits preferable, because big road lumps can give your back a workout otherwise. In Auto mode it’s a kind of mostly-satisfactory blend of the two, but I think I’d stick with Comfort most of the time. 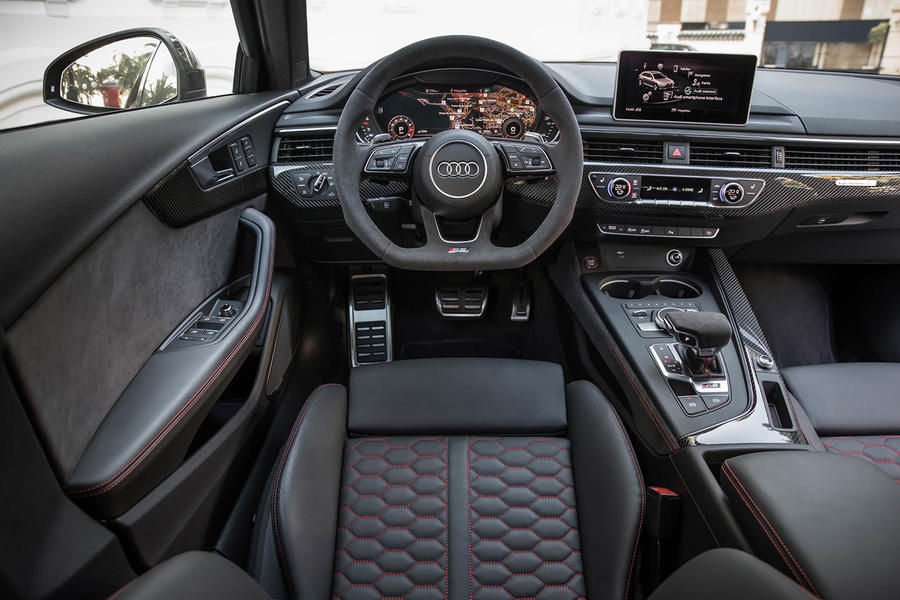 Yes, if absurdly fast and ultra-secure are what you want out of a fast estate - and there’s plenty of evidence that this is precisely what people do want from one.

I’m inclined to prefer the C63 for its more compelling engine note and more natural, engaging handling balance. But the RS4 is very likeable. Maybe it’s easier to warm to it than it is to, say, the RS5, even though the two cars do ostensibly the same dynamic things, because those dynamic things seem more suited to an estate car than a coupé.

It’s a shame that there’s no wagon variant of the other fast compact executive cars, because the Giulia QV, in particular, is a terrific demonstration of how to make a car comfortable, agile and rewarding. I’m inclined to think that sports saloons and estates are best at this size, and the RS4's ability to change direction is one reason why. If the speed in which your luggage travels from one end of a mildly twisting road from another is important to you, then, absolutely, fill your figurative and literal boots. 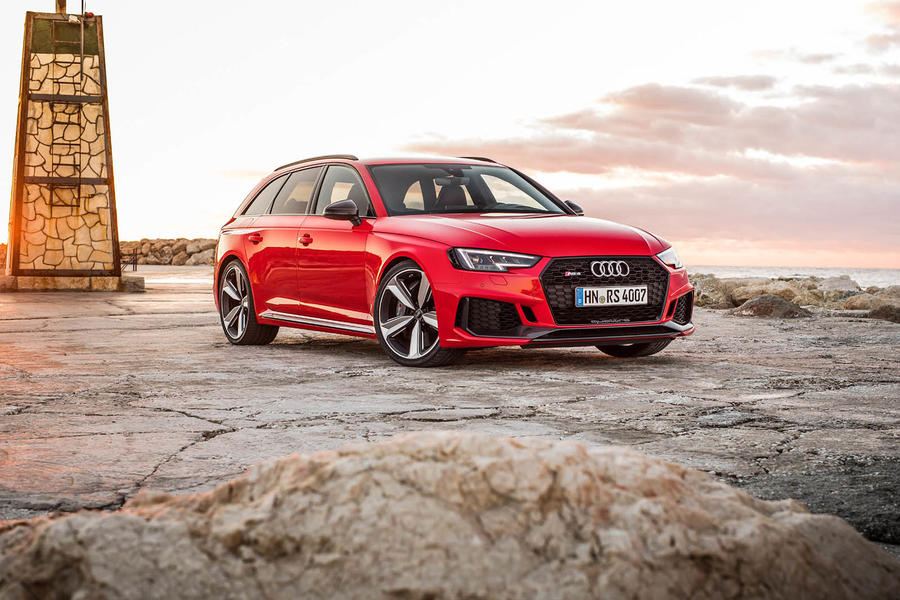 I've been a bit tempted to go and try one of these, but the Golf R Estate I'm currently driving has a larger boot, and is already faster than I can use 99% of the time. It's half the price, does 33 mpg in real life, and is absolutely lovely to drive. Maybe not then?

Power is great, but I think all these fast road cars could do with a "60 hp" button. I miss being able to string a whole load of corners together without lifting the throttle, having to concentrate to keep momentum going, all while at nice legal, safe speeds. Would be good to have the option to re-live that withought losing the ability to safely overtake.

...and its 163 HP seemed to me a bit too involving in certain occasions (good, secure and reliable car, whilst understeering when pushed hard.)

This theory of ...auto-relativity applies also to my actual Suzuki Swift Sport 1.6 -- a gem to drive with *only* 136 HP.

But such an RS4 monster would suck me dry instead of me vampirizing it. :-)

IMO it'd be fun to punch in faster lap times than a C63 AMG, which I'm sure this does.