BACK TO ALL NEWS
Currently reading: Buy them before we do: second-hand picks for 29 January
UP NEXT
WRC Croatia preview: championship returns to asphalt

Buy them before we do: second-hand picks for 29 January

And just like that, it’s almost two years since Infiniti, Nissan’s luxury brand, called it quits in Europe, faced with infeasible costs for securing continued regulatory compliance in a market on which it had never truly left its mark.

It wasn’t the first brand to shuffle quietly away from Europe to seek its fortune in the US or Asia – and with Mitsubishi teetering on the brink of a similar fate, it looks certain not to be the last. It’s a shame, in any case, because it was one of very few brands that might be considered by a prospective buyer in the premium segment who was determined to own something that didn’t hail from Stuttgart, Munich or Ingolstadt.

We’ll take the QX70 (née FX) as an example. Here was a not-unattractive compact SUV in the vein of the Porsche Cayenne, which may have fallen short of its competitors in terms of space, frugality and drivability but surely deserves a look-in for at least attempting to stand out.

We always saw the 3.0-litre V6 diesel engine as the pick of the bunch when it came to engine options, which is why we’ve sought out an oil-burner over the thirstier 3.7-litre petrol or the eyebrow-raising 5.0-litre V8. That leaves us with only 235bhp to play with, compared with 315bhp or 384bhp, but we will sacrifice a bit of grunt for the welcome boost in economy, and the 406lb ft of torque is plenty sufficient for overtaking.

The near-£20,000 asking price is steep for a used car with a relatively unknown badge on its grille but, being an ex-demonstrator, it’s specified to the nines with the desirable Bose sound system, intelligent cruise control, electric glass sunroof and 14-way-adjustable seats all present and correct. 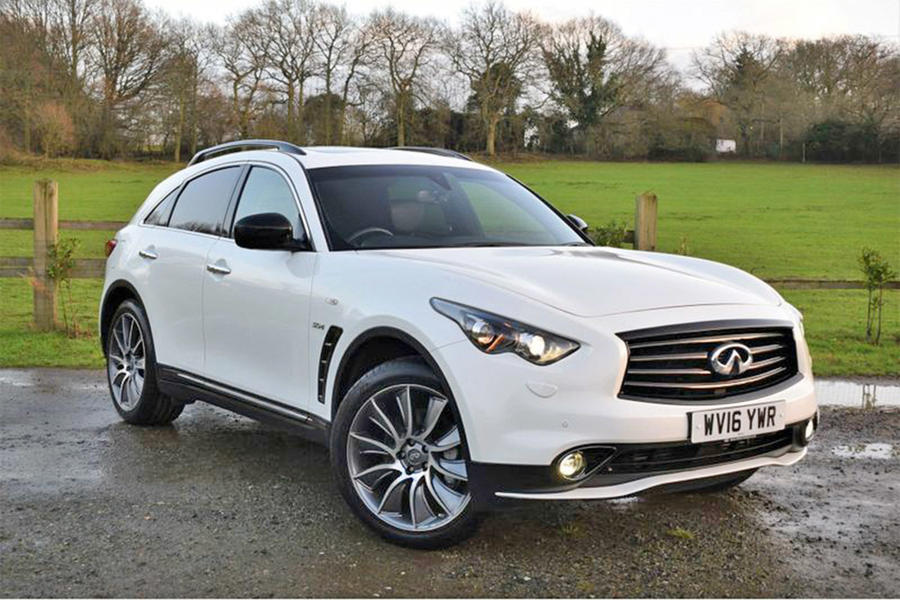 You will also note it rides on jazzy 21in wheels, which will earn their fair share of admiring glances, no doubt, but could secure you a spot on your chiropractor’s Christmas card list.

One bonus of Infiniti’s absence from the British market – and its relative obscurity even when it was here – is that residual values for its models are among the strongest in their respective segments, so the depreciation hit is likely to be minimal for the next couple of years. There’s no need to worry about aftersales support, either, because many Nissan centres have stepped up to support owners of Infiniti cars for the foreseeable future. 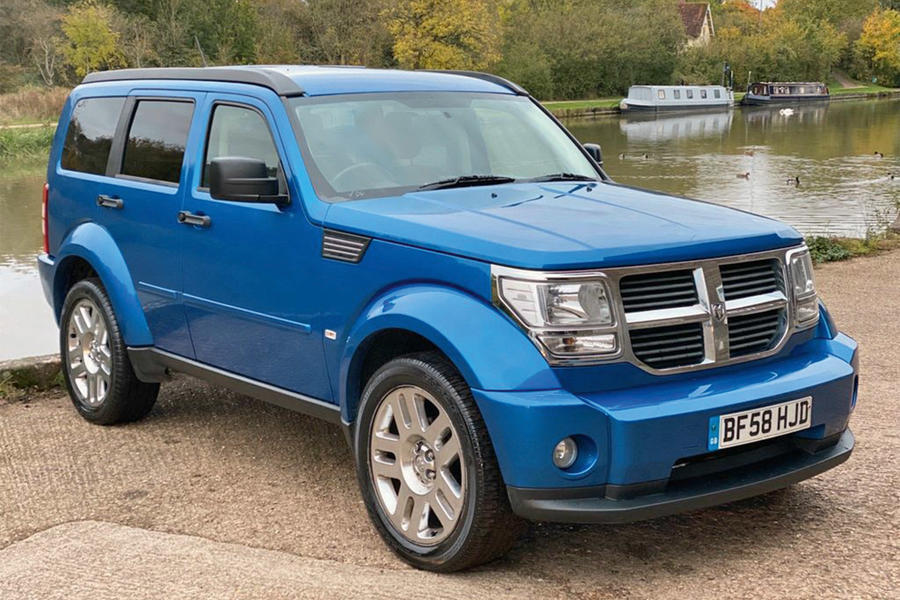 Dodge Nitro, £4990: If there were an award for ‘least appropriately named car’, this would be a bookie’s favourite. Forget about NOS: that 3.7-litre V6 isn’t even boosted by a turbo. Some will be enamoured by the chunky looks, though, and it’s a spacious beast. 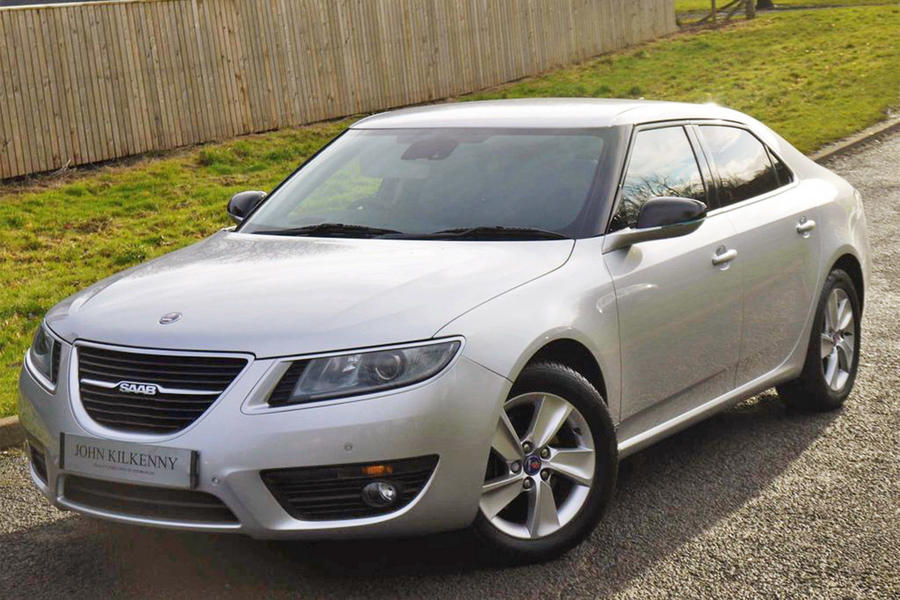 Saab 9-5 TTiD £9495: With punchy performance from its twin-turbo diesel lump and a wealth of improvements over the TiD, the top-rung version of Saab’s last hurrah is a sad glimpse at what could have been. Just four months after we first drove it, production ground to a halt. 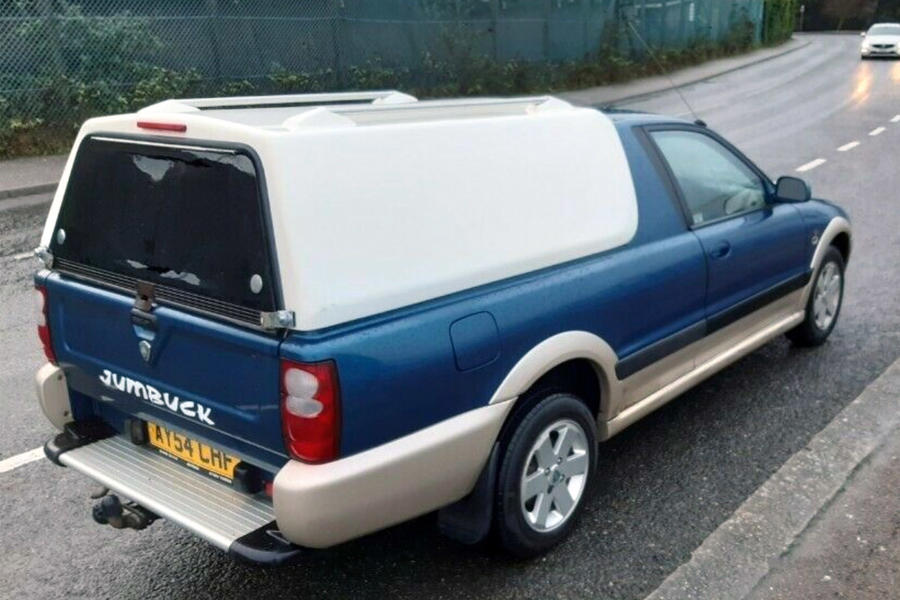 Proton Jumbuck £2495: Strange name aside (it’s Australian slang for a sheep), Proton’s pick-up makes a lot of sense. It’s based on a saloon so brings all the load-lugging credentials of a full-sized truck in a less intimidating package. Crash tests weren’t amazing, mind, so be careful. 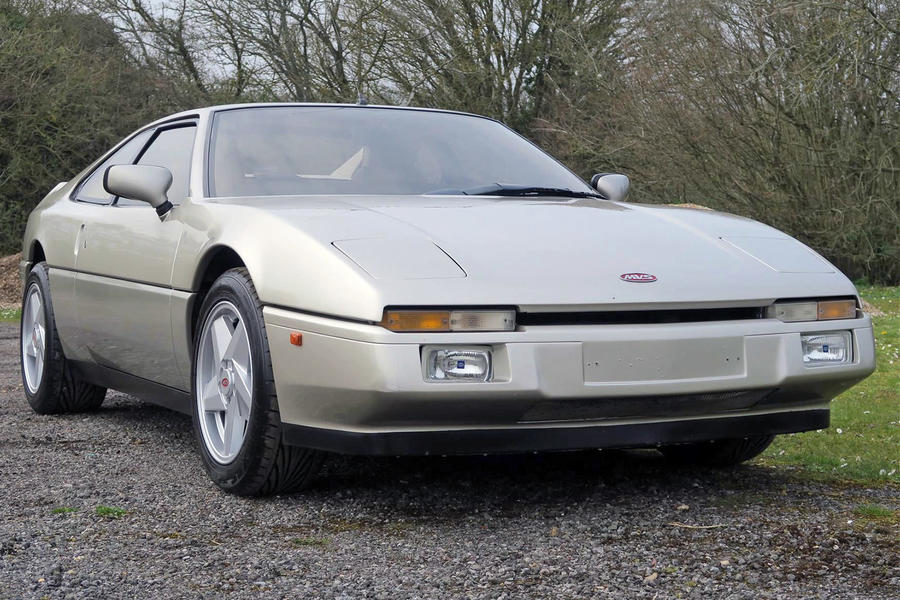 MVS Venturi 200 £29,995: Venturi has enjoyed Le Mans success and even launched the first electric sports car, the Fétish (seriously), but never sold cars in huge numbers. This was one of its first, and it earns a nod of appreciation for its still-impressive dynamics and pleasing proportions. 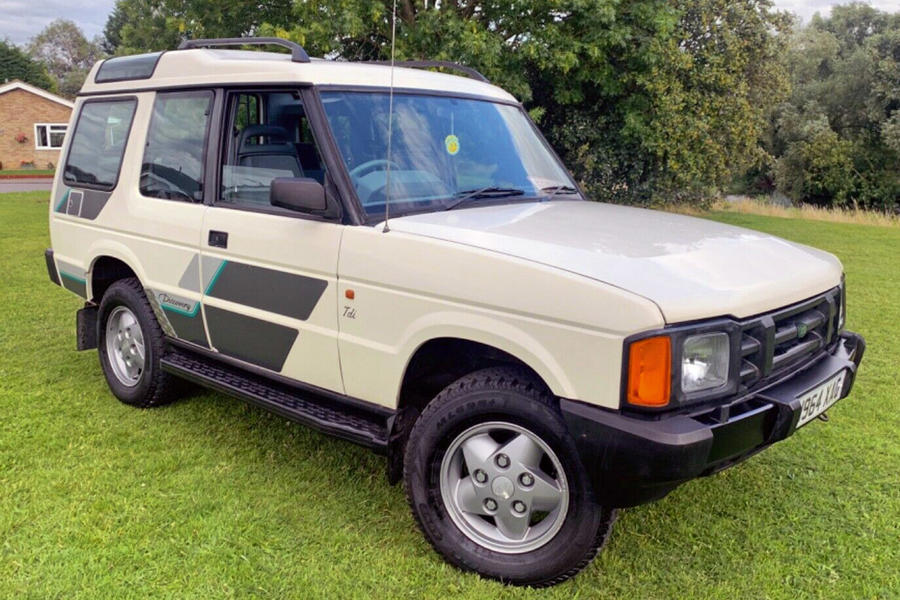 Land Rover Discovery 2.5 TDI: You could bag a top-rung Discovery 3 HSE for the same money, but an unmolested firstgen car like this £4999 example is a safer investment, has less electrickery to go wrong and will still embarrass most modern SUVs on a muddy bridleway. As a second car for a rural household, there’s little else we’d choose. 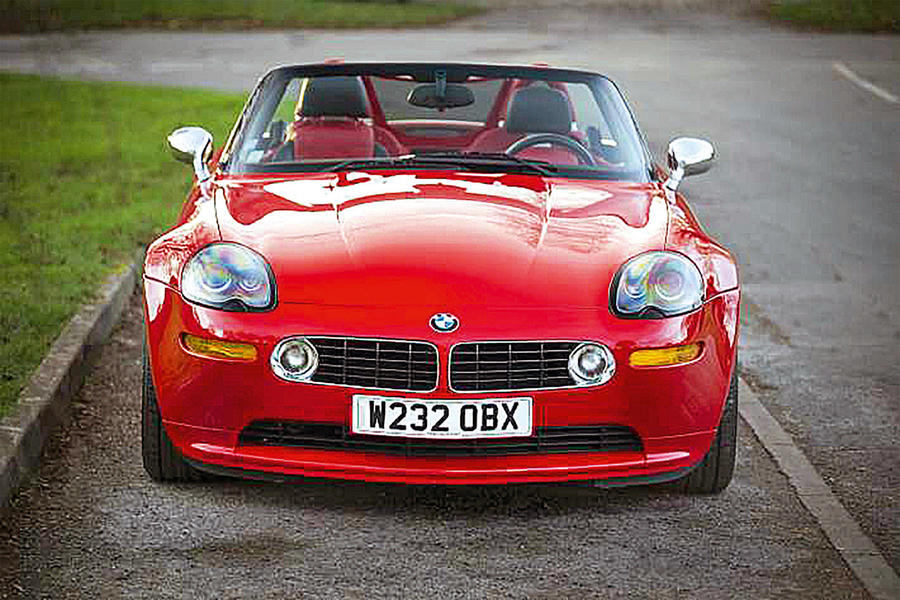 BMW Z8: Have you ever seen a BMW Z8 on the road? Felix Page did once: “It was raining and I was eating a Bakewell slice – details that stick in my mind as testament to just how profound an impact the car made on me.” The millennial reincarnation of the stunning 1950s 507 is an aluminium-bodied, 5.0-litre V8-powered, shark-nosed snarler designed by Henrik Fisker and with genuine Bond car credentials. It failed to quite capture our contemporary testers’ imaginations dynamically, but fewer than 6000 were built, so it will snap more necks on the high street than a same-age Ferrari 360. 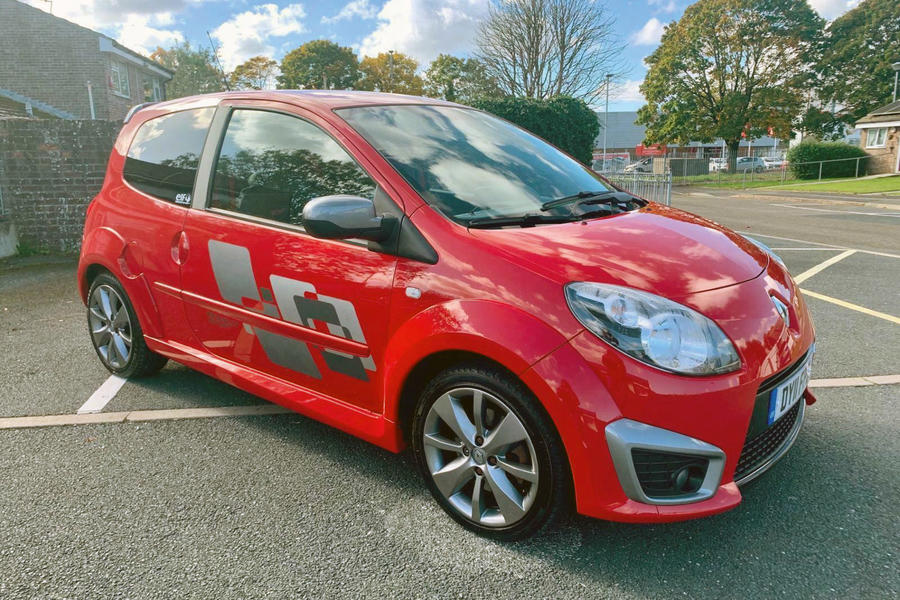 Renault Twingo Renaultsport 133 £3490: We love spicy superminis at Autocar. Part of the appeal is how overtly they rekindle the spirit of the original hot hatches of the 1980s. Take this fast version of the already hilarious Twingo, for example. With a 1120kg kerb weight, 131bhp, a naturally aspirated motor and subtle sporty styling cues, it’s as close a modern car you will find to the Peugeot 205 GTi or Mk1 Volkswagen Golf GTI, and a good deal more accessible than either. Proceed with caution, though, because heavy applications of your right foot will result in swiftly reduced frugality and traction.

Brief: Could I have an economical estate for £7000? 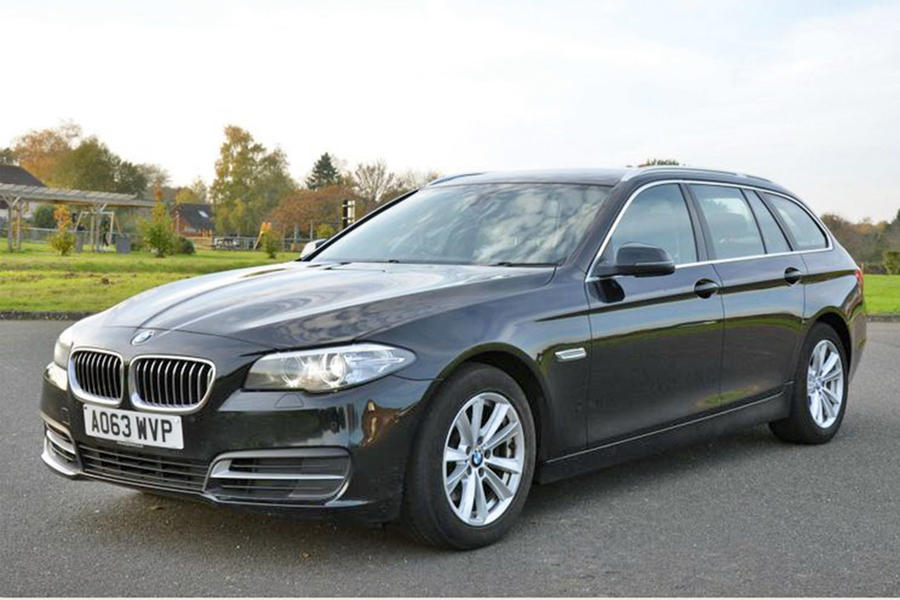 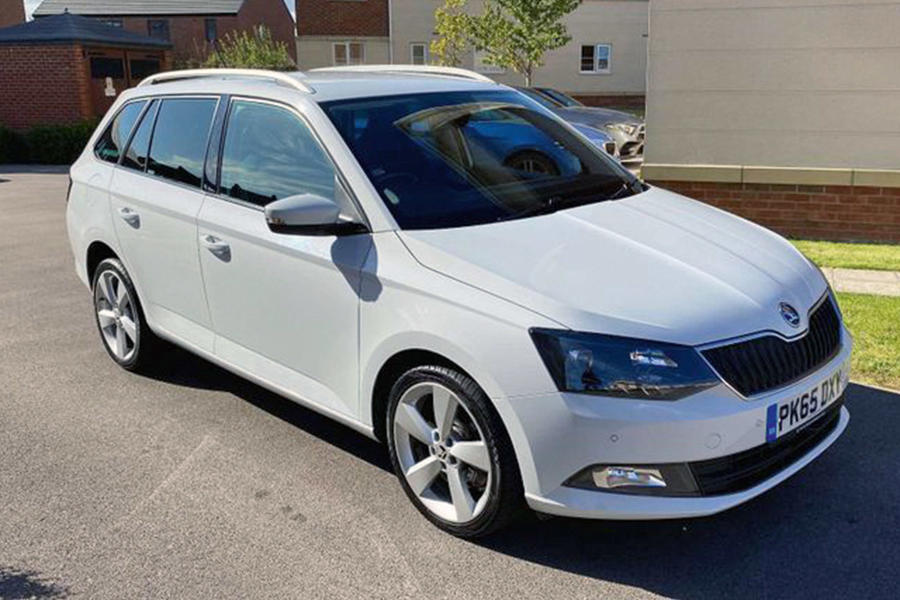 Felix Page: With criteria such as these, exciting and fast cars are largely off the table, but that doesn’t mean you can’t enjoy a spot of brand cachet. This Bimmer is still new enough that you can keep up with the Joneses, has a football stadium for a boot and will crack well over 60mpg on a long jaunt. It should hold its value nicely for a few years, too.

Max Adams: You and your BMWs. Surely the best economical estate is this cute yet deceptively capacious Skoda Fabia. Honestly, it’s like a four-wheeled Tardis. Also, thanks to less weight and a smaller frontal area (probably), mine can achieve more than 70mpg on a run, so I guess I’ve won, then.

FP: Ah, but you’re forgetting about the extra diesel you will use making two trips to the dump for every one my wagon makes.

MA: Erm, my boot is actually 10 litres bigger than yours with the seats up.

FP: Touché… But let’s take the word ‘economical’ at face value: my Munich mammoth packs more kit, more power and more kerb appeal than the Fabia yet costs less. I know which the kids would rather ride in.

MA: Cough cough: thanks to mine being the 104bhp version, it has the same 0-60mph time as your underpowered 5 Series. I’ll take the newer and less leggy Skoda, if it’s all the same to you.

Verdict: That cheap Skoda has got me in estate.

I dont think any one in the premium sector took The Infiniti seriously Felix, thats why it didnt so much wither and die...more stillborn!

I dont know a single Premium SUV owner who has bought one, or even (probably) knew of its existance, it just never reached their radar.

Ill proportioned with a weird long nose, (similar to the equally ignored Maserati Levante), bland looks and a tiny boot, I am not surprised they make a good secondhand buy..... although I wouldnt value this example at any more than £10k.

Still, Old Jake seems to like his - hope he bought it secondhand!

I think Autocar, if you are going to run these articles on used cars, you should add caveates to purchase..... the first gen Discoverey are usually rotten as a pear, particularly the rear chassis ( the front is usually coated in oil - so survives), and the rear floor pan. A mint 3 door first gen is a collectable classic now fetching far more that £5k. At that price level beware!

I dont think any one in the premium sector took The Infiniti seriously Felix, thats why it didnt so much wither and die...more stillborn!

I dont know a single Premium SUV owner who has bought one, or even (probably) knew of its existance, it just never reached their radar.

Ill proportioned with a weird long nose, (similar to the equally ignored Maserati Levante), bland looks and a tiny boot, I am not surprised they make a good secondhand buy..... although I wouldnt value this example at any more than £10k.

Still, Old Jake seems to like his - hope he bought it secondhand!

I think Autocar, if you are going to run these articles on used cars, you should add caveates to purchase..... the first gen Discoverey are usually rotten as a pear, particularly the rear chassis ( the front is usually coated in oil - so survives), and the rear floor pan. A mint 3 door first gen is a collectable classic now fetching far more that £5k. At that price level beware!

geed 31 January 2021
Stupid autocar comments section always loses my text when I quote.! Rubbish site on an andriod....pop up ads everywhere. FX is a stunner....get your eyes tested...289 you are punch drunk on german bling? Agree with you on the disco though....buy a patrol or a shogun...far far superior vehicles in every way
OldJake 29 January 2021

As the owner of one of the "eyebrow-raising" 5.0; V8 Infinitis (an FX50), I can honestly say that it's one of the best cars I've driven.  Out of the 32 cars I've owned in 35 years of driving, this is the only one that makes me cry at the thought of having to give it up.  The only one where I haven't started planning my next car after a month or 2 of ownership.  Leave it to do the work and the acceleration is "Wow!".  Stick it in sport mode and use the paddles and it's "I think I just wet myself".  By some standards, 5.8s to 60 isn't stunningly quick but it's not bad for a big ol' SUV and holds its own against or outguns a lot of mainstream performance cars - often to their surprise when they tailgate you and you floor it when the car in front of you moves over.  I've done a trip round Yorshire and another round the Highlands.  Chucking it round small roads is a breeze.  Sure footed and flat.  It eats motorway miles and is incredibly comfortable.

geed 31 January 2021
Lovely and rare car Jake. I bet you feel special driving it amongst the these dull, obvious bmw's and audi's